Travel to Tibet for Japanese nationals is simple, and often requires just two simple steps, Japan to China or Nepal, and then China or Nepal to Tibet. With multiple flight options for getting to China and Nepal, direct flights to Beijing, Shanghai, Guangzhou, Chengdu, and Kathmandu are readily available, and easy to procure.

A tour to Tibet for a Japanese national requires that the tour be booked through a registered Tibet tour operator. For our clients, we can provide Tibet permit service for free. All you need to do is book a Tibet tour with us, and email your photo image of your passport information page, Chinese visa page and the photos of yourself to your travel consultant. Once the tour is booked, the tour operator will apply for the Tibet Travel Permit on your behalf, and forward it by express to your hotel in China ready for your tour.

Joining our well-designed Join-In Group Tours is a great way to tour Tibet for solo travelers or those with a limited budget. The tours are all pre-organized with set dates for departure, and anyone can choose to join the tour as part of the group. The groups are made up from other solo travelers that wish to travel as a group for either company or to save money, and range from four-day to fifteen-day tours. The main benefit of the Join-In tours is the lower group numbers that means the guide can give a better and more personalized service to all members of the group.

With so much to see in mainland China, touring the cities or attractions from inland China first is an option that many take. You can travel to your favorite places in China before heading up to the plateau to tour across Tibet, visiting the stunning city of Lhasa, and the spectacular landscapes and sceneries of the Himalayas. From Tibet, you can then move on to Nepal, and visit the exotic city of Kathmandu or trek in the EBC as the final leg of your tour. These packages are an ideal way to cover more of China and Nepal in one go, and are a great way to extend your tour of Tibet.

How to Get to Tibet from Japan? Multiple ways to travel from Tokyo to Tibet.

Getting to Tibet from Japan means a flight from Tokyo’s Narita Airport to either China or Nepal. Once in China, you can choose to fly to Lhasa from Beijing, Shanghai, Chengdu, etc., or take one of the trains that leave from the seven gateway cities across the country, which take from 22 to 53 hours to get to Tibet. From Kathmandu, you have the options of a low-level flight across the Himalayas to get to Lhasa, or you can start your tour at the Sino-Tibet Border, and travel overland to the Tibetan capital. 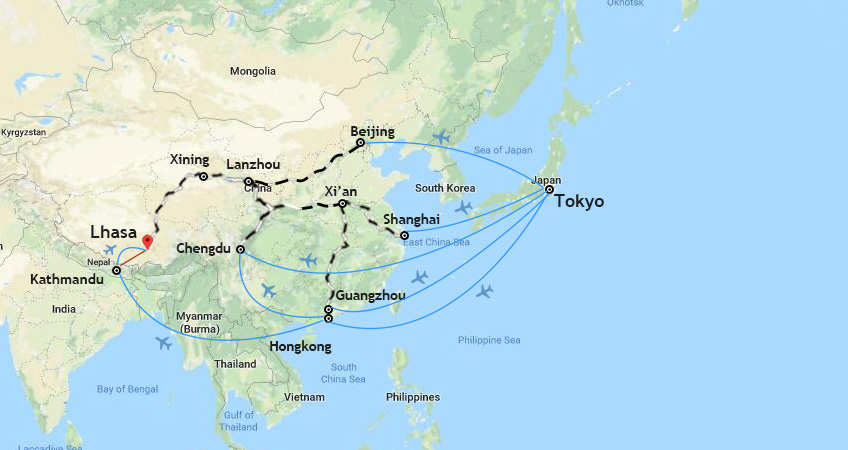 On your arrival in China, your Tibet Travel Permit will be sent to your hotel by express courier, so that you are ready to take your tour to the Roof of the World. In some extreme situations, our staff will deliver the permit it to you in person at the airport or railway. You will need the permit to book and board the trains or flights to Tibet, and it is also required for hotel check-ins and for inspection at the various military and police checkpoints across the region.

By train
Departing at 11:45 am daily, the train from Guangzhou takes over 53 hours to get to Tibet, making it the longest of all the train journeys to Lhasa, which might be a challenge for small kids and the elderly. Covering almost 5,000 kilometers, the train arrives in the Tibetan capital at around 5:05 pm on the third day.

By train
The trains from Chengdu depart every other day at around 9:37 pm, and arrive in Lhasa on the third day at around 9:55 am. Covering a distance of 3,070 kilometers across mainland China and Tibet, the journey takes a little over 36 hours, and is one of the more popular gateway cities to travel to Tibet from. Scheduled departures from Chengdu are on odd days of the month (1st, 3rd, 5th, etc) in January, April, May, August, November, and December, and even days of the month for the rest of the year.

Flights to Kathmandu’s Tribhuvan International Airport in Nepal are not direct, and require at least one stopover from all airports in Japan. The indirect flights to Nepal from Japan range from between 10 hours and 14 hours, with stopovers in Beijing, Shanghai, Guangzhou, Chengdu, and Kuala Lumpur, among many others, and for some, there is a change of airport, which increases the flight time greatly. However, these indirect flights are relatively cheap, starting at around US$ 240 for an economy flight.

The most amazing journey in Asia has to be the overland tour from Kathmandu in Nepal to Lhasa in Tibet. The tour route crosses the mighty Himalayas at Gyirong port, the international land border crossing checkpoint between Nepal and China, and is an adventure of epic proportions. Starting with a 7-8 hour bus ride along narrow mountain roads to get to the border, once across you will be met by our guide and driver and transferred to Gyirong Town for your first night.

After that, you will travel across Tibet, from Mount Everest Base Camp in the west of the region to Shigatse, and Lake Yamdrok as you progress east, finally reaching Lhasa for the last few days of your tour. In Lhasa, the capital of the region and the center of Tibetan religion and culture, you will get to experience Tibetan life first hand, at the Jokhang Temple and infamous Barkhor Street, before heading to the airport or railway station for your flight or train onwards.

If you are planning to enjoy a trip to Tibet from Japan, yet have no ideas of how to sort it out the details, no worries! We would like to hear your tour plan and offer free professional consultancy and viable solutions. Please feel free to contact us.