13 Days All Around China and Tibet Discovery Tour

The tour includes the traditional highlights of China. Beijing, Xian, Yangtze River, Shanghai. We put Lhasa together because it is easy to access from Mainland China with only 2 hours domestic flight from Xian.As Tibet gradually opened to international tourists, Lhasa became another indispensable highlight of ChinaTourism.

Explore the Forbidden City, where emperors ruled ancient China, and the other highlights of Beijing, the Great Wall, the majestic Temple of Heaven, Summer Palace of the emperors. Discover the unbelievable buried Terracotta Warriors of Xi'an before flying to Lhasa. Get to know the culture of Tibetan Buddhism by guidance of Tibetan Tour Guide, visit the magnificent Potala Palace and you will be chocked by the tremendous treasures inside, walk into the monasteries to hear the chanting of monks. After Lhasa, fly to Chongqing to start the Cruise tour to admire the extraordinary and epic excursion of Great Yangtze River.

This is a cost-effective travel with group tour in each city, optimized for you to enjoy every stop on your trip.

Arrival Beijing, Please go to our reserved hotel by taxi by yourself

Fly to Lhasa from Xian 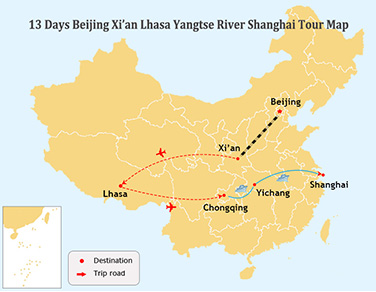 Day 1: Arrival Beijing, Please go to our reserved hotel by taxi by yourself

When international flight lands in Beijing, Please take a taxi by yourself to our reserved hotel. The rest of the day free for you to be on your own.

Today is guided tour to Forbidden City and Summer Palace which are the traditional must-see places in Beijing. These attractions present to the visitors an image of how the ancient Chinese emperors manage the country, what their family life is, how they spent leisure time, how they sacrifice gods.

The Great Wall tour proves that China was one of the strongest countries in its history. Stretching thousands of kilometers, the Great Wall protected the ancient Chinese against the invasion of the enemy from its north side for more than 1000 years. The Great Wall was listed as one of the world's eight wonders. Mutianyu Great Wall, featured “graceful”, enjoy the best quality among all Wall sections, 80km north-east of Beijing with 22 ancient watchtowers, about one every kilometer. (Cable car is optional if you do not want to walk)

After the tour, you will be drop off at the train station to board the overnight sleeper train to Xi’an, the reference train number is Z19, which departs from Beijing at 20:40, arrive in Xian at next 08:31(the Sequence of Day2 & Day3 might be exchanged according to the arrangement of travel agency)

Overnight in the train

The tour guide will pick you up from Xian railway station

The day tour in Xian is impressive too. The Emperor’s Terracotta Army is also one of the eight wonders in the world. These terracotta warriors and horses are the size of a real army, and were buried alongside the Emperor in a vast underground palace.The archeological site of Banpo Village, built more than 6,000 year ago, and you will see how the resident matriarchic tribe used to survive in the Neolithic age. Short visit at the Terra-Cotta Replication Factory on the way back to downtown.

Day 5: Fly to Lhasa from Xian

Please take a taxi by yourself to from hotel to Xian airport to board the flight to Lhasa, when check-in and pass by the security, you need show the original Tibet Travel Permit to the airport.

Flying from Xian to Lhasa, you will fly from China's low-altitude inland into the high-altitude Qinghai-Tibet Plateau, you can watch the plains, canyons, forests, glaciers evolved into the snow-capped mountains from the aircraft. Tour guide will pick you up at Lhasa Gonggar airport and you will be transferred to hotel in Lhasa by Tibet Vista shuttle bus.

The tour will begin from UNESCO World Heritage site - Potala Palace, which is also the winter palace of Dalai Lama. It's situated at 12,139 feet above sea level. It's a 13-story high building that contains over 1,000 rooms, various statues, stupas, murals and artifacts. Then continue to Jokhang Temple, another UNESCO World Heritage site. It’s a spiritual center for Buddhists in Tibet. Next to the temple there is Bakhor Street, filled with pilgrims and street vendors, selling traditional Tibetan items such as prayer wheels and jewelry.

You will fly to Chongqing where the Yangtze Cruise Tour start. Your tour guide will escort you to Lhasa airport and see you off.

Airport to Pier transfer with tour guide is included, your Chongqing tour guide will escort you to board the cruise and help you check out. You will have a chance to go through the Chongqing City from the airport to the pier, which is biggest city built by the Yangtze River. The cruise sail at about 21:00 in the evening.

Overnight in the Cruise

Today is your first day of Yangtze River Cruise Tour. You will visit Fengdu Ghost City (off cruise tour, optional) at about 09:00. Having nearly two thousand years' history, the Fengdu Ghost City combines the cultures of Confucianism, Taoism and Buddhism with the mystique of ghosts. Tourist can see the Chinese Ghose culture and characters in here.

Then enjoy a Shibaozhai Shore Excursion at about 16:00. Shibao Zhai Village is a tower with 12 floors. It is one of several high wooden buildings in China nowadays. It is the typical and symbolic buildings characterizing of Chinas southern folk architectural techniques.

Stay overnight in the cruise

Today is the last day of your cruise journey, and you will visit Three Gorge Dam at 08:15. The world record smashing Three Gorges Dam, the world's largest dam and hydroelectric power station, you will have chance to witness the tropic man-made wonder.

The Cruise Tour ends at Yichang at 12:45. Yichang tour guide will pick up you from pier tourist station and escort you to the airport. Then you can fly to Shanghai. Please take taxi from Shanghai airport to reserved hotel in Downtown by yourself.

Tour guide will pick you up at hotel in the morning, today, you will explore Classic & Modern Shanghai Full-view Sightseeing. Including Visit Yu Garden, the bund, Shanghai Old Wax Figure Museum and Old French Concession. You will not only see the Asia's most modern skyscrapersbut also the modern Chinese culture sites in the most flourishing city in the world.

End the tour, please arrange taxi from your hotel to Shanghai airport.

Get Started - 13 Days All Around China and Tibet Discovery Tour