This tour starts from modern international metropolis - Shanghai and move westward to Chengdu, the home to giant pandas and then head to Lhasa, the religious center of Tibetan Buddhism. Later, tourists will enjoy the breathtaking scenery along Qinghai-Tibet Railway via Lhasa-Xian train and then visit the ancient Xian city and Terracotta Warriors and Horses Museum. At last, our tour ends in Beijing, which bears historical and cultural significance.

Shanghai Tour and Fly to Chengdu

Chengdu to Lhasa by Flight

Arrive in Xian by Tibet train 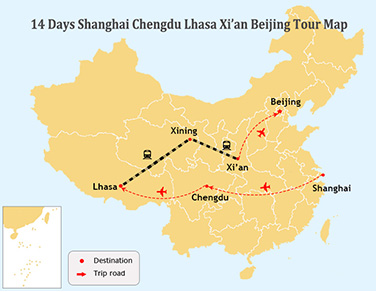 Transfer to your reserved hotel after arriving in Shanghai Airport. The rest of the day is free for you. You could have a rest in your hotel or look around in the city on your own.

In the morning, we are expected to visit picturesque Zhujiajiao Ancient Town, also known as the "Venice of China". It’s about 1 hour drive from downtown Shanghai. The ancient town dates back to Ming Dynasty. It’s highly recommended to enjoy the boat ride from one end of the water way to the other. Ke Zhi Garden and multiple shops and bridges, and street vendors selling handicrafts and goldfish and turtles provide a respite from boisterous metropolitan city.

After a good rest at hotel in the afternoon, you will be transferred to Shanghai Pudon International airport and take flight to Chengdu. After you arrived in Chengdu, the guide will be meeting you and take you the hotel.

Day 5: Chengdu to Lhasa by Flight

After breakfast, you will take your flight to Lhasa at Chengdu Shuangliu Airport. Upon arriving in Lhasa airport, you will be transferred to your hotel in Lhasa. The rest of the day is free for you to acclimatize the high elevation of Lhasa.

In the morning, you will be transferred to Lhasa Railway Station for your train to Xian. The train Z166 from Lhasa to Xian starts at 11:15am and arrives in Xian at 20:34pm next day. You will spend a whole day on the world famous Qinghai-Tibet Railway, the highest railway in the world.

As you arrive in Xian, the local guide will escort you to your hotels. And the rest of the day is for you to have a rest.

Afterwards, we will head to tour another must-see attraction in Xi’an Big Wild Goose Pagoda. Originally built in 652 during the Tang dynasty, the Pagoda is known for keeping the Buddhist scriptures and figurines of the Buddha brought by Xuanzang, one of the most renowned Chinese monks. The whole place is one of the most visited destinations by international tourists in Xi’an.

Day 11: Fly from Xi’an to Beijing and visit Tiananmen Square and Forbidden City

Take the morning flight (around 2 hours) from Xi’an to Beijing first. Later the guide will get you transferred to hotels. In the afternoon, we will stroll on the historic Tiananmen Square which is the largest city square in the world and the spiritual heart of China, and the magnificent Forbidden City which used to be the imperial palace of the Ming and Qing dynasties with a history of around 600 years.

Visit the majestic Great Wall (Badaling section) and the Ming Tombs. You will be taken on a group tour to the Great Wall, the most famous symbol of China and one of the world's most remarkable architectural wonders. This section was first built during the Ming Dynasty (1368-1644 AD).

Then you will visit the Ming Tombs, the burial site of the emperor Wanli, the 13th emperor of the Ming Dynasty who ruled for 48 years until his death in 1620.

You will be transferred to airport for your flight to your next destination.

This tour is a loop tour of china, including modern and bustling cities and its historical inheritance and religious culture, plains and prairies, virgin forest and flowing streams, rivers and mountains. Different natural landscapes in different regions of China and wonderful highlights of different ethnic groups are concentrated in this itinerary. It is definitely worthwhile to visit.