How to Make It from Lhasa to EBC in Two Days? Is it advisable?

For travelers with little time to spare, the lure of Mount Everest may seem like an impossible task, one that will require you to spend weeks in travel to reach the high mountain at the Roof of the World. However, it is actually possible to travel to Mount Everest’s famous base camp, known as EBC, without stopping to admire the sights of the capital. You can, if you really want to, take a private tour to EBC that runs for two days there, and two days back, giving you a basic four-day trip across the plateau. However, while it is possible, it is definitely not advisable. For international travelers, it is much better, and a lot safer, to take some time to acclimatize to the altitude in the Tibetan capital before heading out to elevations in excess of 5,000 meters.

If you are considering taking a short four-day trip to EBC and back from Lhasa, then you should be aware of the conditions that you will be facing. Planning this kind of short tour of Tibet has to be done as a private tour, as there are no Small Group Tours that are offered in Tibet for this kind of itinerary. The tour assumes that you will arrive in Lhasa the day before your departure for EBC, and depart the day after you arrive back in Lhasa from Shigatse.

The first day of this trip takes you from the Tibetan capital to Shigatse, the second city of Tibet and the home of the Tashilhunpo Monastery. After departing the capital, you will travel southeast to pass along the shores of the sacred Lake Yamdrok, known as the life-blood of Tibet. Passing along with some amazing views of the Nyenchen Tanglha Mountains, you will stop briefly at the Karola Glacier, before arriving in Gyantse, once the largest town in Tibet. Here, you will tour around the Pelkor Chode Monastery and visit the famous 32-meter Kumbum Stupa, with its 108 chapels. Then on to Shigatse for the night, another 90 minutes of driving from Gyantse. 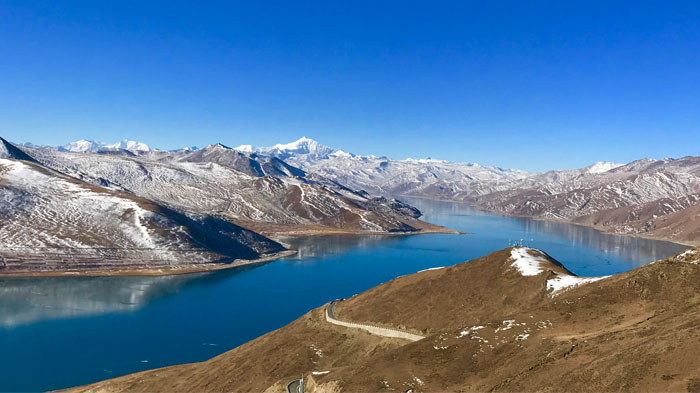 You are able to enjoy the breathtaking view of Yamdok Lake.

Before departing, you will visit the Tashilhunpo Monastery, home of the Panchen Lama, the second highest incarnation in Tibetan Buddhism. Then it is out on the road to Old Tingri, from where you take the long road southwest that leads to the famous base camp. The route takes you over several high passes, including Tsola Pass (4,600m), Gyatsola Pass (5,248m), and Gawu La Pass (5,198m), before arriving at the base camp, at around 5,150 meters above sea level. 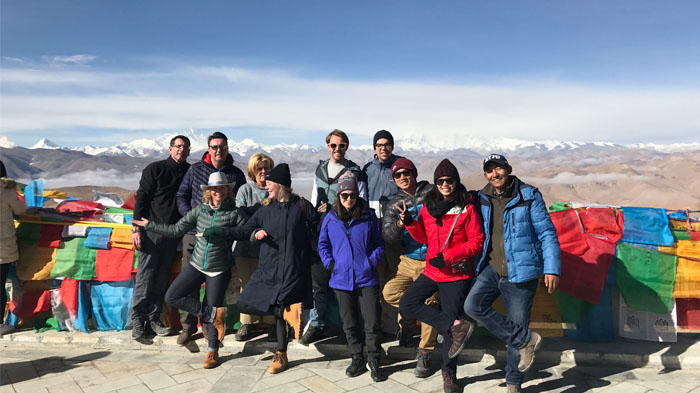 This short trip is only suitable for people that have a very tight schedule for travel, and are not concerned about their own safety and health. For travelers that are insistent on reaching the famous base camp in as short a time as possible, this is a good option. Ideally, this is only the perfect tour for someone that has already acclimatized to the altitude of the plateau, and will not put themselves at risk of severe altitude sickness.

The biggest drawback of this kind of shortened itinerary is the hugely increased risk that you will get severe Acute Mountain Sickness (AMS), which can be potentially fatal if not treated immediately. AMS, or altitude sickness as it is more commonly known, is a fatal illness that affects everyone that travels to altitudes above 3,000 meters.

With thinner atmosphere at higher altitudes, the body cannot get enough oxygen in each breath, and requires time to adjust to the higher altitude. This normally takes around 2-3 days, depending on the person and their behavior while acclimatizing. Traveling to EBC from Lhasa is an increase of more than 1,500 meters in two days, more than five times the recommended ascent increase to reduce the risk of severe AMS.

You will also miss out on some of the most amazing landmarks in Tibet, which are found in the capital, including the famous Jokhang Temple and the iconic Potala Palace.

And when it comes to cost, this will be a very expensive tour, as you will need to pay for the whole thing yourself, instead of sharing some of the cost on a Small Group Tour.

So, we strongly suggest clients extend their EBC vacation to spend more days in Tibet, for the benefit of the experience of traveling in Tibet, and for their own safety and health while traveling on the plateau. After all, you did not come to the beautiful Tibetan plateau just to die in the shadow of the World’s Highest Mountain.

A much better option is to take a longer tour, taking eight days to travel from Lhasa to EBC and back, to allow you to acclimatize better and make the trip safer. This longer tour gives you chance to acclimatize in Lhasa before traveling to higher areas outside the capital. Lhasa is already more than 1,300 meters higher than the highest entry point to Tibet in Xining, and requires you to acclimatize to this increase in altitude first, before moving on to much higher altitudes than many people have ever been. You can also spend more time exploring the Tibetan capital and the surroundings.

After you arrive in Lhasa, either by train or flight, you will be transferred to your hotel, where you can rest from the journey and the sudden increase in altitude. It is possible to spend a little time, if you have it, to have a look around the area near your hotel, but you should remember that you will need your guide to enter any attractions. And you should try and rest as much as possible, as a good night’s sleep can really help you to feel better.

The first full day is normally spent sightseeing the city’s major attractions, while you acclimatize to the increase in altitude. While you are getting over any effects and symptoms of AMS, you can visit the iconic Potala Palace, former seat of Tibetan monastic governance. You can also explore the ancient and sacred Jokhang Temple, home to possibly the oldest statue of Buddha in the world, and walk around the monastery on the pilgrim’s kora route, which is also the main shopping street in Lhasa, known as Barkhor Street.

The second day of acclimatizing takes you to two of the famous Gelug tradition monasteries that are located on the fringes of the city. Sera Monastery is renowned in Tibet for its amazing location and the unique method of Tibetan Buddhist debate that can be seen here every afternoon between the resident monks. Drepung Monastery is the main monastery of the Gelug Tradition, and was the original seat of the Dalai Lamas in Tibet, before the rise of Gelug power in the region in the 16th century.

The first day out of the city starts with a drive to the sacred Lake Yamdrok. A huge and beautiful lake, it is believed to be the life-blood of Tibet. Then it is on to view the pristine Karola Glacier, before stopping again to tour the Pelkor Chode Monastery in Gyantse. The monastery is home to the 32-meter Kumbum Stupa, the only one of its kind in Tibet.

Then you will continue on for another 90 minutes to reach Shigatse, the second city of the region. Here, you can spend a short time exploring the barley mill and local fields, before resting for the night.

The final day of the journey to EBC begins with a tour of the Tashilhunpo Monastery in Shigatse, before you leave for Mount Everest. The seat of the Panchen Lama, the second highest incarnation in Tibetan Buddhism, the monastery was built by the first Dalai Lama in the 15th century. 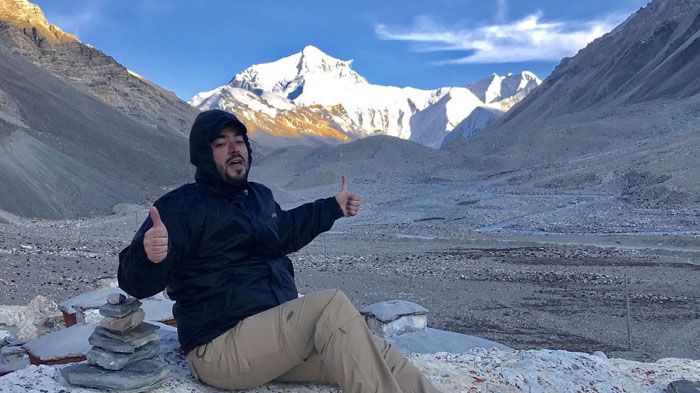 You will finally get the chance to witness the imposing Mount Everest at Everest Base Camp.

Then you will depart Shigatse, and continue on the famous G318 Friendship Highway, turning off to head south at the town of Tingri. The road to EBC is well paved, and crosses three high passes, two of which are above 5,000 meters in altitude. After around 100km of travel from Tingri, you will finally reach the destination of your dreams, the first Everest Base Camp trip.

While it is possible to take a short two-day tour to reach EBC, without acclimatizing first, it is not advisable. This is a trip that takes you from China’s lowlands below 500 meters to an altitude in the extremes, at more than 5,000 meters above sea level. Ascending this high, over 4,500 meters in three days is a fool’s journey, and drastically increases the risk of severe and potentially fatal AMS. If you are planning a trip to Tibet to visit Everest, plan it more carefully, and take it when you have time to do it safely. You are guaranteed to enjoy it more if you take your time and explore the Tibetan plateau’s stunning wonders more fully. 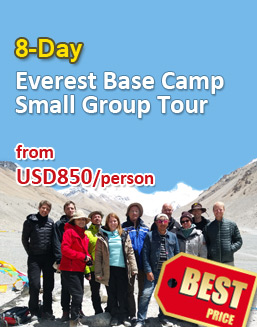 0 Comment ON "How to Make It from Lhasa to EBC in Two Days? Is it advisable?"