Kathmandu to EBC Distance: how far and how to get to EBC in Nepal and Tibet from Kathmandu

Lying right on the border between China and Nepal, Mt. Everest has been climbed from both sides, and has had permanent base camps set up in both Nepal and Tibet. These base camps, which were originally just for the climbers to stop at to acclimatize before heading further up the mountain, have become huge tourist attractions in both Tibet and Nepal, with hundreds of thousands of visitors to them every year.

Getting to the Everest Base Camps (EBC) from Kathmandu is no mean feat and requires careful planning and execution to ensure that there are no mishaps. On the Nepal side, the route to the southern EBC requires a 12-day trek through ever-increasing landscapes, while on the Tibet side, the northern EBC can be reached direct by road.

Kathmandu to EBC in Nepal

For those traveling to EBC in Nepal, it is generally understood that you will need to trek for almost two weeks to get there. The base camp lies at an elevation of 5,380 meters and is a climb that requires at least two days of acclimatization along the route. However, before starting the trek, you will need to get a flight from Kathmandu to Lukla, the mountain village that marks the start of the trailhead.

Flights to Tenzing-Hillary Airport in Lukla depart from Kathmandu’s Tribhuvan International Airport daily, with around 5-6 flights per day. Located in the Solukhumbu District of Nepal, Lukla is around 140 kilometers east of the Nepali capital and the flights take around 45 minutes. Thousands of trekkers head for this small village on the side of a mountain every year to make the trek to EBC in Nepal, and the village has become one of the most popular tourist destinations in Nepal. However, it takes an expert pilot to land at the airport in Lukla, as it is very short, and has a massive cliff at one end and a sheer drop at the other. Only small aircraft land there, with only around 6-8 passengers on each trip. 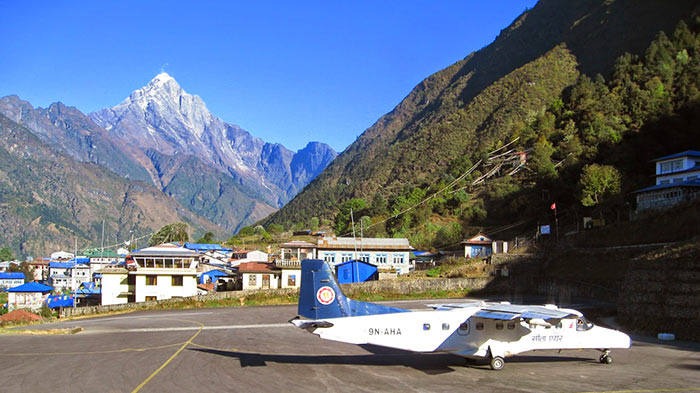 From Lukla, the trek to EBC takes around 12 days, which normally includes two days for acclimatizing to the increasing altitudes along the way. Most trekkers leave from Lukla on the same day they arrive there, to make the best of the remaining day and to get to the first stopping point. Phakding village is the first day’s aim, and usually takes around 5 hours. Then it is on Namche Bazaar on the second day, where you will make your first acclimatization stop. Day four of the trek takes you up to Tengboche, at an altitude of 3,870 meters, after a steep climb out of Namche Bazaar. After the steep climb, most of the day is on a fairly level trail, until the final climb up to Tengboche after you pass through the small hamlet of Sanasa.

Day five sees you heading for Dingboche, at an altitude of around 4,350 meters, and takes you through several small villages along the way. At one of the villages, Deboche, there is a small nunnery that is worth stopping to see, as it is a unique example of Nepali monastic architecture. It is also a nice place to stop for lunch. From Dingboche, day 6 takes you higher than you have yet climbed, to the village of Lobuche, which is the second day of acclimatization, at the altitude of 4,920 meters. At this altitude, the oxygen levels are around 56 percent of the oxygen at sea level, and it is harder to breathe. The rest day is essential and should not be missed. 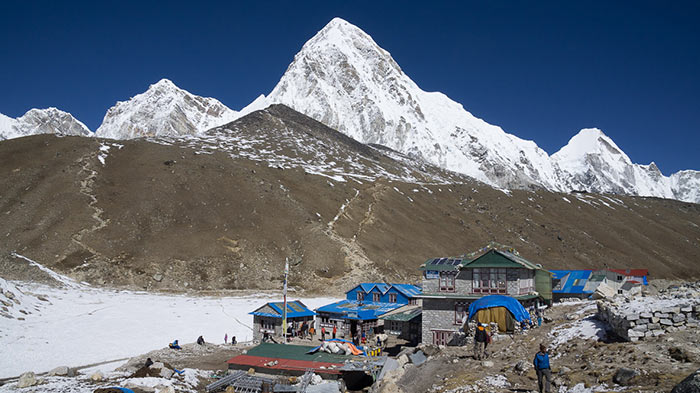 On day 8, you will make the trek to Gorak Shep and one of the best views of Mount Everest in Nepal. At 5,170 meters, Gorak Shep is almost as high as EBC itself, and you get some great views of the surrounding Himalayas. To get that view of Mount Everest, however, you will need to make an additional trek, off the trail to the ridge known as Kala Patthar. At 5,545 meters, it sits above the base camp, and is the best place to get a view of the summit of Mount Everest, which cannot be viewed from the base camp itself.

After spending the night in Gorak Shep, day nine is the final leg of the journey to EBC. The base camp lies at 5,380 meters and is around 180 meters higher than the one in Tibet. The trek takes around three hours and gives you some stunning views of the surrounding mountain, including the famous Khumbu Icefall, which is the route used by Sir Edmund Hillary and Sherpa Tenzing Norgay on their epic journey to the summit of Everest, the true “Roof of the World”.

Kathmandu to EBC in Tibet

Getting to EBC in Tibet is far less arduous than the long, hard trek to EBC in Nepal. Traveling independently in Tibet is prohibited, and all tourists must book a tour with a registered tour operator such as Tibet Vista before being able to get the permits required to travel to the region.

As the largest tour operator for Tibet, we can ensure that your permits and passes are all in order prior to your trip and take all the hassle out of the arrangements by doing it all for you. Once you have booked your trip with us, we will make the application for your Tibet Travel permit, the main permit required to travel into and around Tibet. We will also make the applications for the other permits you will require to travel around the areas of Tibet outside Lhasa, as well as your visa. 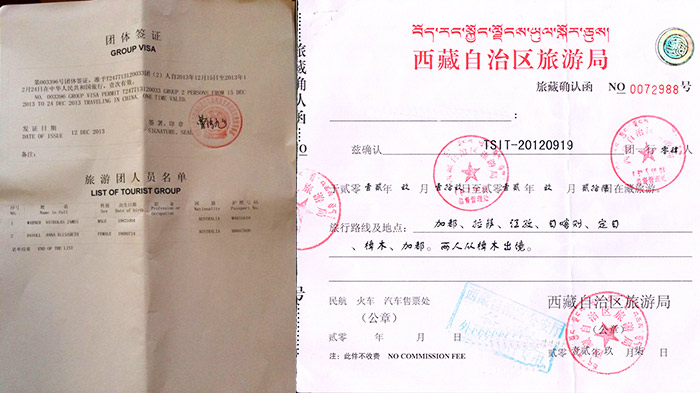 Entry from Nepal means that you do not need the normal Chinese Entry Visa. Instead, a China Group Visa is issued from the Chinese Embassy in Kathmandu once you arrive there. Processing of the visa requires your original passport, which will be collected by our agent in Kathmandu, and takes around three days to process. You should aim to be in Nepal at least five working days before your expected departure date.

Traveling to Tibet via Gyirong Port

Getting to Tibet from Kathmandu is usually done using the public bus, which leaves the Nepali capital daily and takes around six hours to get to the Nepali customs control point at Rasuwagadhi Fort, on the border with Tibet. You can opt to hire a private vehicle if you are not into public buses which are normally cramped and hot, but the cost is much higher.

Once in Rasuwagadhi Fort, you will be dropped off and pass through customs leaving Nepal. Then it is a short walk across the Resuo Bridge, which spans the Trishuli River Gorge to Gyirong Port on the Tibetan side, where you will pass through Chinese immigration control. Once cleared, your guide and driver will meet you at the immigration office to take you to Gyirong Town, the first stop of any overland tour in Tibet.

From Gyirong Port, it is a long drive to EBC in Tibet, covering a distance of around 334 kilometers. The route from Gyirong Town to Rongbuk Monastery, at the foot of Mount Everest, takes the whole day, and you will stop for the night in the monastery guesthouse. The route is a little circuitous, as the roads in Tibet rarely go in a straight line due to the changing landscapes. 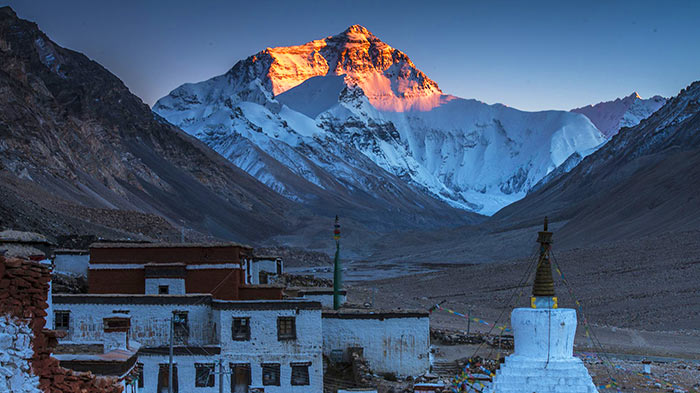 Seeing the sunrise of Mount Everest at Rongbuk Monastery

In the morning, you will get the chance to get out early to see the stunning view of the sunrise on the slopes of Mount Everest, which lies just a few kilometers away. After breakfast, you can take the drive to the base camp which lies just eight kilometers from the monastery, or you can trek the short distance to EBC, admiring the spectacular scenery along the way. Walking takes around an hour or two, depending on your level of fitness and speed, but is a delightful walk across the high plateau landscape.

For those that want to trek, there is a four-day trek that can be done from Old Tingri, on the Friendship Highway, to EBC itself, traveling across country. The trek covers around 70 kilometers and is not classed as a hard trek. With it taking four days, you will need to camp at night for the three nights you are traveling, although there are some guesthouses along the route that can be used if you wish.

Alternative Route to EBC in Tibet

Instead of taking the overland route, you can get flights to Lhasa from Kathmandu, and travel to EBC from there. Flights from Kathmandu run daily and take around 90 minutes to make the 1,000-kilometer flight to the Tibetan regional capital. Tribhuvan International Airport in Kathmandu is the only airport in the world that offers international flights to Tibet.

Overland to EBC along the Friendship Highway

Once in Lhasa, you will get time to acclimatize and visit some of the amazing sights of the city, including the Jokhang Temple, Tibet’s most sacred building, the Potala palace, and the monasteries of Sera and Drepung, among other places.

After you leave Lhasa, the overland journey to EBC and back, or on to Kathmandu across the border, takes around 8-9 days. You will also get to see the many sights and scenes of Tibet along the way, as you travel overland along the Friendship Highway to Shigatse and then to EBC itself. Some of the sights you will encounter along the route include: the Gyantse Kumbum, a 32-meter stupa with 108 chapels; Pelkor Chode Monastery; Tashilhunpo Monastery, the only monastery to house three separate schools of Tibetan Buddhism under one roof; and the Rongbuk Monastery, the highest monastery in the world. 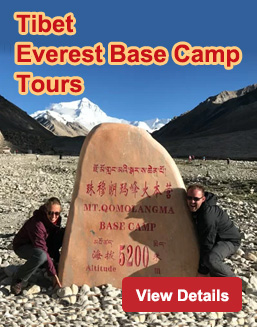 0 Comment ON "Kathmandu to EBC Distance: how far and how to get to EBC in Nepal and Tibet from Kathmandu"