How to Get to Everest Base Camp (EBC) from Lhasa?

Located in the southwest of Tibet, Everest Base Camp, also known as EBC, is the first base camp of Mount Everest, opened in the 1920s, and generally the farthest place where the tourist travelers in Tibet can reach. Travelers swarm to Tibet in their thousands every year just to catch a glimpse of Mount Everest, the world’s highest mountain. The base camp is actually located around 620 kilometers from the Tibetan capital of Lhasa, by road, or just 450 kilometers as the crow flies.

So, how do you get to the Everest Base Camp (EBC) from Lhasa, such a huge distance away? Well, there are several options for traveling this long highway to the base camp of the world’s highest mountain, including by car, by bicycle, or even by trekking, though the trek does not actually start in Lhasa.

Get to Everest Base Camp by Overland (The Most Popular Option)

The most popular way to get to Tibet’s Mount Everest Base Camp (EBC) is by car or tour vehicle, traveling the distance between Lhasa and EBC along the modern highways of the region. One of the main advantages of this method of travel, aside from being faster and a little more luxurious, is the ability to stop and visit the various attractions along the way, with more time to spend on each than if you are trekking or cycling.

Overland Route and Road Condition from Lhasa to EBC

The overland route from Lhasa to EBC is done on paved roads for almost the whole distance. The route follows the Friendship Highway for most of the trip to EBC only turning off at Old Tingri, where the road heads south to reach Rongbuk Monastery and the base camp itself.

When departing from Lhasa, the first major stop is in Shigatse, the second city of Tibet. There are actually two routes to get here, and the choice of route depends on what you are visiting along the way. The main route, along the G318 Friendship Highway, is the direct route, and takes you straight to Shigatse with no stops. The direct distance from Lhasa to Shigatse is 223 kilometers in a straight line, or along the G318 direct, is around 268 kilometers. 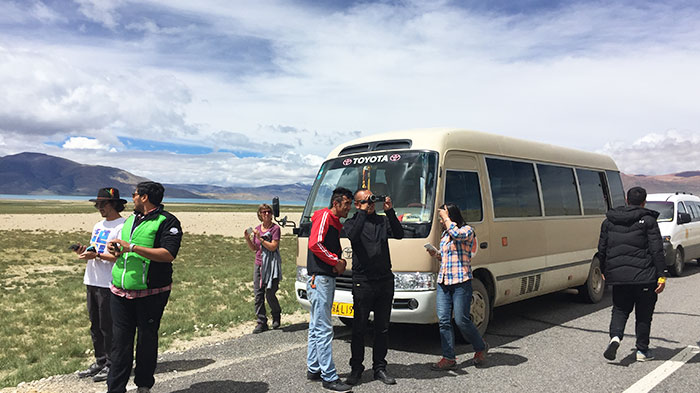 Getting to EBC by car can appreciate impressive scenery.

However, the alternate south route is the better one, as it takes you past some of the region’s most stunning attractions. This route is around 358 kilometers in length, and makes a diversion to pass by Lake Yamdrok and Gyantse along the route to Shigatse. The drive takes all day, stopping at the attractions, and you reach Shigatse in the late afternoon.

While it is not a long distance to Tingri from Shigatse, only around 243 kilometers, it can take a while to get there, as the roads in Tibet are not as fast-running as western roads. On average, it can take around three hours to make the journey, with no stops, and you may want to stop and get out for photos along the way, as well as stopping for lunch. The road conditions on this stretch of the Friendship Highway are good for Tibetan roads, and you can make good travel time along with them.

The final stretch of the route from Lhasa to EBC takes you from Old Tingri to the base camp itself, a distance of just 100 kilometers. On normal roads, this would take just 70 minutes. However, the road to EBC from Tingri is not as good as the Friendship Highway, and there are still a few sections that are mere gravel roads. On average, it can take around two hours to make this trip. However, the views that you get as you cross the main passes into the Qomolangma National Park are amazing, and well worth the trip.

Highlights along Road from Lhasa to EBC

There are many sights and experiences along the route to EBC from Lhasa, and these are all part and parcel of a tour of the region along this route. A distance of 618 kilometers by road, the scenic route to EBC takes you past first the Yamdrok Lake, one of the Great Three Sacred lakes of Tibet, where you can stop and get some amazing photos of this holy lake that is the life-blood of Tibet. Not far from the lake lies one of the most pristine glaciers in the world, the white Karola Glacier. Its tongue reaching down almost to the road, this amazing sight is well worth stopping for a few photos and selfies. 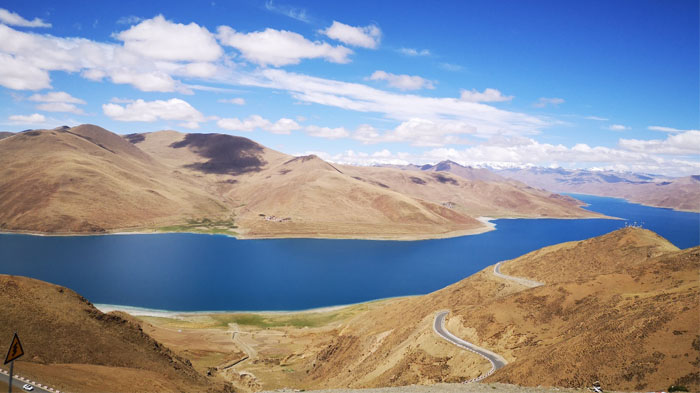 You will have a chance to enjoy the breathtaking scenery along the holy Yamdrok Lake.

Then, it is on to Gyantse, one of the larger cities in the region. Gyantse is also home to the Pelkor Chode Monastery, which houses the amazing Kumbum, a stupa that stands 32 meters tall and is the only one of its kind in Tibet. After Gyantse, you will head for Shigatse, and the amazing Tashilhunpo Monastery, the seat of the Panchen Lama, Tibetan Buddhism’s second highest incarnation after the Dalai Lama.

One of the most amazing sights of the entire trip is the view from the top of the Gawu La Pass, which sits at an altitude of 5,198 meters above sea level. The view from the crest of this high pass gives you an awesome panorama of the Himalayas, including Mount Everest and several of the other highest mountains in the world.

Get to Everest Base Camp by Trekking

Another option for traveling to the base camp of the world’s highest mountain is to take a trek across the plateau. However, the trek does not start in Lhasa, and you will be driven from the Tibetan capital to the start of the trek at Old Tingri. From there, you will trek the 70 kilometers to the base camp, hiking overland through valleys and over passes, which takes around four days.

Trekking from Old Tingri to EBC

The trek from Tingri to EBC is one of the best treks in Tibet, and gives you an amazing experience of the Tibetan plateau, including several small village communities and the opportunity of paying a visit to some of the nomadic herders of the region in the right season.

The first day of the trek takes you from Tingri to Lungthang, a distance of around 12 kilometers that can take up to five hours to complete. The trek departs from the small town and heads due south, crossing the Tingri Plain and on into the Ra-Chu Valley. There you will get the chance to explore the vast meadows of the area, filled with flocks of sheep and goats that graze on the lush grasses of the meadows. Along the route to Lungthang, you will also get to stop at the Choelun Monastery, a small monastery set far from civilization. 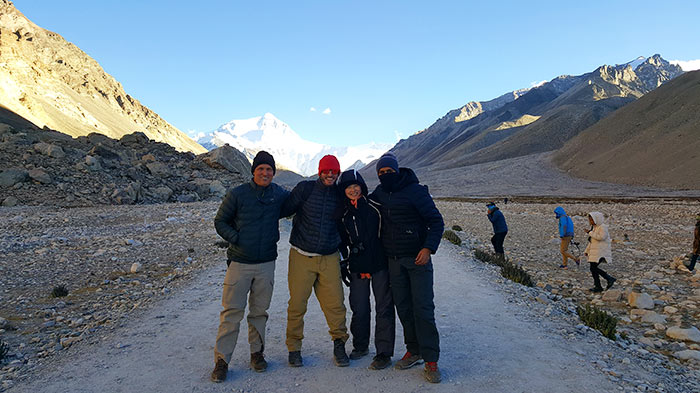 The second day is challenging, as you will be climbing up into the mountains to crest the Lamna La Pass, at 5,150 meters above sea level. The view is amazing, and you will camp for the night just below the crest of the pass in the Lamna Valley.

The third day is an 8-hour trek along the valleys to Zommug, more than 22 kilometers, but most of this is downhill, as you are heading down to the lower valleys of the area, before reaching EBC. You will camp just outside the village for the night, and get to watch the amazing sunset.

The final leg of this trek is the run to Rongbuk Monastery and EBC itself, which takes around 6 hours. The trek is a gradual increase in altitude, with Rongbuk sitting at 5,100 meters and EBC at 5,200 meters. You will also get to stop and visit the monastery, renowned as the world’s highest Buddhist monastery, before heading on to Mount Everest.

Get to Everest Base Camp by Cycling

Cycling from Lhasa to EBC is one of the most adventurous journeys in the world. The route follows the same roads as the drive to EBC, though it does take a lot longer, lasting around 19 days in total both ways. The tour is an amazing experience, and there is no better way to get to see and experience the unique Tibetan plateau and its delightful people than under your own steam. 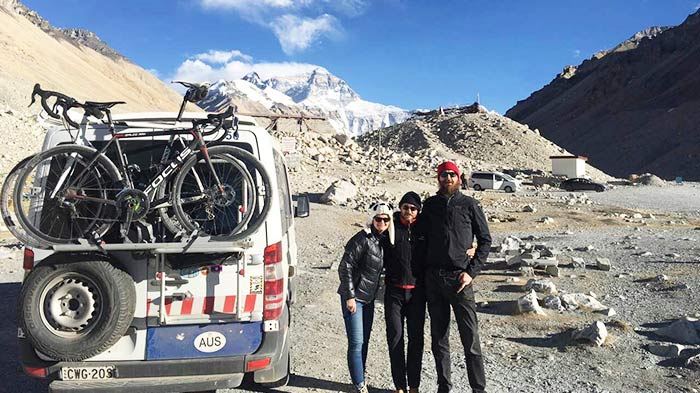 Cycling to EBC is also an excellent option.

While the rides over the various 5,000+ meter passes can be arduous and tough, there is no better feeling than when you reach the crest and look out over the landscape ahead of you. Biking tours are fast becoming more popular in Tibet, as the experience of riding across the plateau on a mountain bike is like no other in the world.

Get to Everest Base Camp by Train

Unfortunately, there is currently no train that can take you to EBC in western Tibet. And while there is a railway being planned to travel into Nepal and beyond, this will not pass by Mount Everest. However, you can get the train from Lhasa to Shigatse, a section of the Sino-Nepal Railway that has already been completed and is now open. This train ride takes just a couple of hours, and can reduce the travel time for those heading for EBC that have a limited time to travel in Tibet. It is also useful for those intending to trek from Tingri to EBC, as you can conserve your energy on the train ride.

More Useful Tips for Travelling to Everest Base Camp

Due to the high altitude, the big temperature difference between daytime and night can make people catch a cold quite easily, and increase the risk of altitude sickness. So it is extremely vital to prepare proper clothes. Although basking in the sunshine is so enjoyable, sunglass, sunhat and sun cream are of essence for strong ultraviolet light from the sun.

There are regular buses running between different counties of Tibet. But, due to some reasons, foreigners are not allowed to take the regular buses alone and they can only travel in Tibet organized by qualified travel agencies. Traveling in Tibet needs Tibet Travel Permit and other related documents, such as Alien's Travel Permits, Frontier Pass. Your travel agent will help you apply for.

The best time to visit Everest Base Camp is from April to October, but July and August are not good months to trek for abundant rain, if you want to know more detailed information, you can refer to Tibet Everest weather and climate.

Getting to Everest Base Camp is a major achievement for anyone not used to traveling at the high altitudes of the Tibetan plateau, and this amazing journey is one of the best in Tibet. Whether you take a bike or motorbike, car, or take the train and trek, there is no feeling like arriving at the foot of the world’s highest mountain, after visiting the amazing sights and scenery on the Roof of the World. 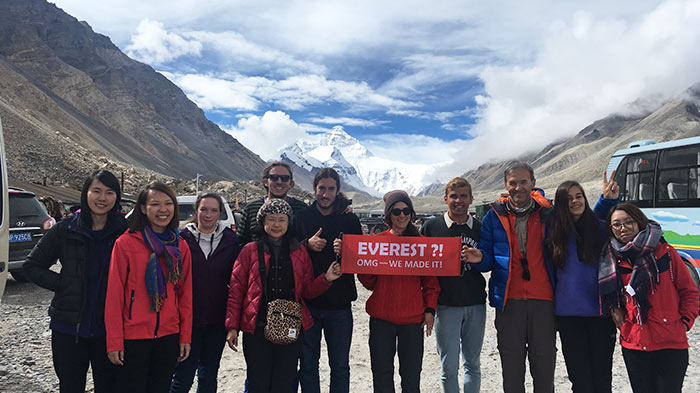 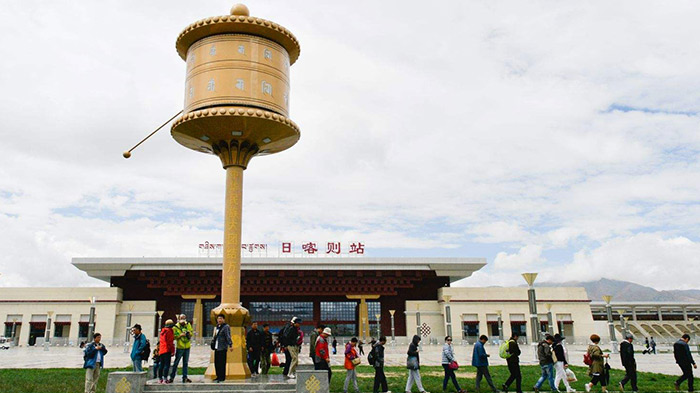 0 Comment ON "How to Get to Everest Base Camp (EBC) from Lhasa?"