Nepal is home to 8 of the 14 highest peaks in the world. One of the key attractions of traveling to Nepal is to take in stunning views of these Himalayan giants. There are many great reasons to visit Nepal, including its friendly people, its cultural heritage sites and its world class treks. The biggest attraction of all is perhaps the amazing views on Himalayan giants such as Mount Everest, Annapurna, Ama Dablam and Machapuchare.

While the views of Mount Everest are stunning, you cannot see the mountain from the Everest Base Camp in Nepal. However, there are other places where you can get to see this majestic mountain. For trekkers there are virtually unlimited options to view Mount Everest. The first brief views of the world's tallest mountain appear over the Lhotse-Nuptse ridge on the forested pathway to Namche, usually on the second day of trekking after a flight to Lukla. From the top of Namche Bazaar, where you have the Everest View Hotel, is where you can get the first great view of Everest, standing tall among the mountains. With a superb panorama of the Khumbu peaks and Everest, this is shortest trek you can do to see the world's tallest mountain. 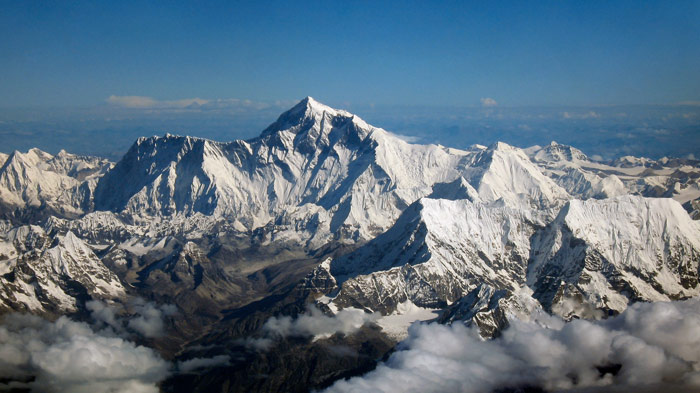 Another excellent place to get the great views of Everest is from the top of Kala Patthar. Kala Patthar is Nepali for “black rock” and is located on the southern range of Pumori in the Himalayas. It is the highest viewpoint and offers a very close view of the Everest. It also offers astounding views of mountains such as Nuptse, Amadablam, Lhotse, Changtse, Pumori and Nup II. Trekking to Kala Patthar doesn’t require special climbing skills, and is part of the EBC trek from Lukla.

Pikey Peak is a newly opened trekking route in lower Khumbu. There are two different way to get into Pikey Peak, one is from Jiri, and another is flying from Kathmandu to Phaplu airport. Pikey Peak is not only one of the best view points for Everest; from here you can see other spectacular mountains over 8,000 meters, including Kanchenjung, Makalu, Lhotse, Manaslu, Dhaulagiri and the Annapurna range. Pikey Peak is also popular for sunrise and sunset views.

Located at the head of the Khumbu Glacier, Khumbu Icefall lies on the slopes of Mount Everest, a short trek above the Base Camp. Formed by the fast movement of the Khumbu Glacier, the best view of the icefall is from the base camp itself. Only a short distance from the base camp, the icefall is a dangerous place to trek across, and it is best done in the early morning, before the ice has had time to melt, making the icefall more unstable. 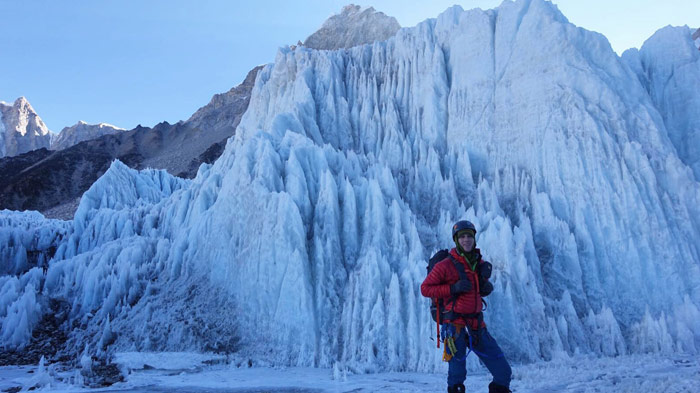 Meaning “Black rock” in Nepali, Kala Patthar is one of the most notable landmarks on the south ridge of Pumori, and just above Gorak Shep on the EBC trail. While it is not a proper mountain, with a peak that is only ten meters above the surrounding ground, it is one of the best places from which to view Mount Everest. Although not an official trek on its own, the Kala Patthar trek is an optional extra when hiking the Everest Base Camp Trek. The ascent of this “hill” is very popular with Everest trekkers, and it provides some of the best views of Everest, Nuptse, and Changtse from its small peak. 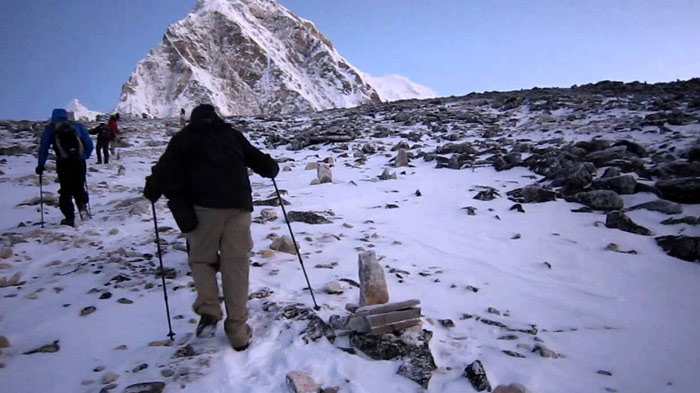 The ascent of Kala Patthar makes its way up a series of steep switchbacks before leveling off somewhat as it traverses to the eastern side of the mountain. The trail then becomes steep once again until it reaches the wind-swept summit ridge. From there, a 5-10 minute scramble over boulders takes one to the top, which is marked with prayer flags.

The Khumbu Glacier is situated between Mount Everest and the Lhotse-Nuptse Ridge. It begins in the Western Cwm, flows down between the two mountains, and swerves to the right through the Khumbu valley. As it melts, the Khumbu Glacier drains into the Lobuche River. On its route down the mountain, the glacier swerves to its left as it moves past the tents of the Everest Base Camp. The highest glacier in the world, this slow-moving river of ice is best viewed from the base camp, or from Kala Patthar. 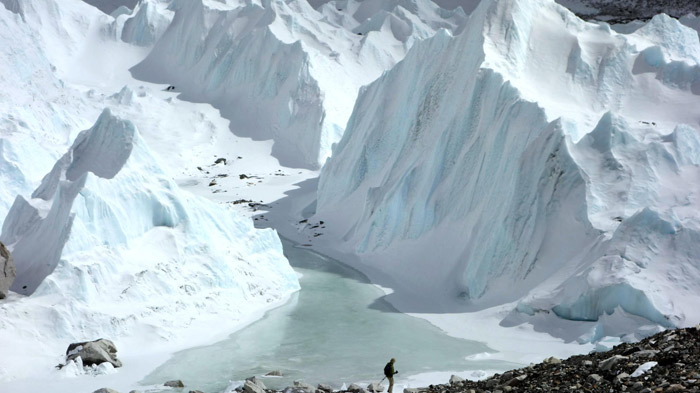 Nangkartshang Peak is a spectacular viewpoint in the Khumbu region. The peak sits above Dingboche on the EBC trail, and is more of a “sub-peak” of a higher ridge than an independent mountain. Since many people spend a rest day acclimatizing in Dingboche before going to higher places such as Kala Pattar, Everest Base Camp, or Island Peak, climbing Nangkartshang is one way to spend the “rest” day, and one of the most worthwhile as well. 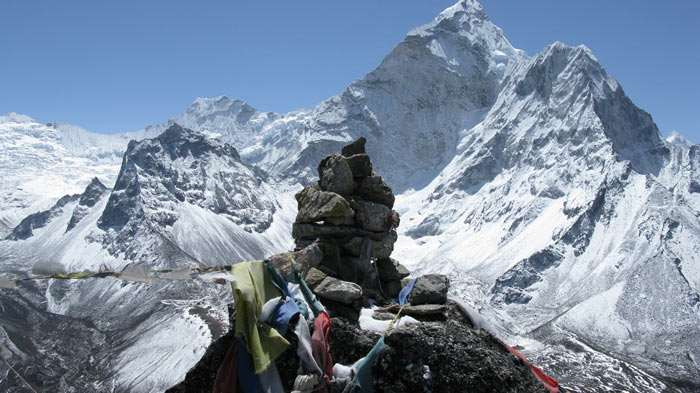 Nangkartshang Peak has some minor scrambling, but for the most part is an easy ascent. The peak is climbed frequently, but not nearly as frequently as other similar peaks in the region such as Gokyo Ri and Kala Pattar. The views are among the best of any walkable peak in the region, and Kangtega, Ama Dablam, Nuptse, Lhotse, Makalu, Cho Oyu, and Tawoche are all visible in their full glory from the summit.

The fourth highest mountain in the world, Lhotse stands at 8,516 meters above sea level, and is part of the Everest Massif. It is connected to the Everest peak via the famous South Col, and in Tibetan Lhotse means “South Peak”. The summit is right on the border between Nepal and Tibet, and the mountain comprises of three peaks, including Lhotse Middle and Lhotse Shar. 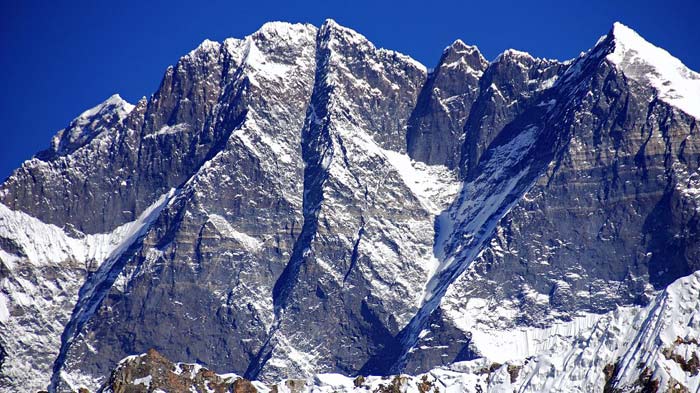 Of all the viewing points of Lhotse, the best is from Gokyo Ri or Gorak Shep/Kala Patthar. From Gorak Shep and Kala Patthar the views are spectacular, and it is a great side trip from the EBC trail. A bit farther from Everest Base Camp and lesser-known and visited than Kala Patthar, Gokyo Ri lies at an elevation of 5,483 meters. The view of Lhotse is spectacular and some consider it as better than Kala Patthar. Getting to Gokyo Ri is a challenging 8 days of tough walking from Lukla, but it will also reward with the magnificent views of Gokyo Lakes and the mountains Cho Oyu, Everest, and Makalu.

Makalu is the fifth highest mountain in the world at 8,485 meters and is located in the Himalayas 19 kilometers east of Mount Everest, on the border between Nepal and Tibet. It is an isolated peak and its size alone is impressive, but its structure, that of a perfect pyramid with four sharp ridges, makes this mountain all the more spectacular. Chomo Lonzo is a subsidiary peak of Makalu, rising just north of the higher summit, separated by a narrow saddle. 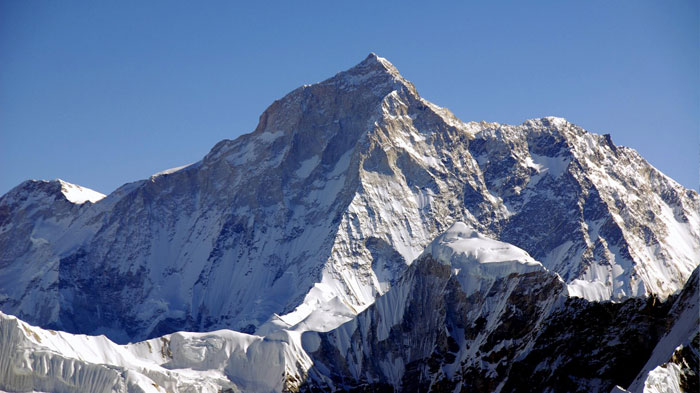 Makalu is a rarely visited gem. It is considered one of the toughest 8,000 meter peaks to climb, and even the great Edmund Hillary failed twice. However, the wilderness around it is just waiting to be explored by the intrepid trekker prepared to forgo the comforts of teahouse treks. The camping trail to Makalu Base Camp from the south is considered one of the toughest routes in Nepal, and you are more likely to have the company of birds than fellow hikers. 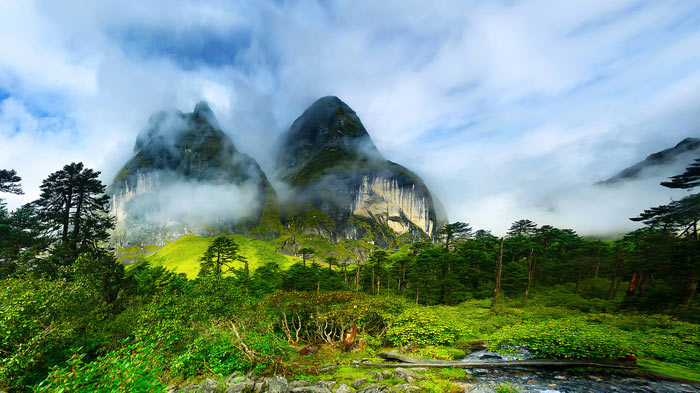 At the base of Makalu lies the Barun Valley, a glacial valley that provides a stunning contrast to the high peaks of the Himalayas. This beautiful valley of the mountain is where high waterfalls cascade into deep gorges, craggy rocks rise from lush green forests, and colorful flowers bloom beneath white snow peaks. This unique landscape shelters some of the last pristine mountain ecosystems on Earth. Rare species of animals and plants flourish in diverse climates and habitats, relatively undisturbed by human kind.

Cho Oyu is the sixth highest mountain in the world, and another of the great sights you can see along the EBC trail. highly visible from Gorak Shep, Kala Patthar and Gokyo Ri, it towers above the valleys at a height of 8,188 meters above sea level. Meaning “Turquoise Goddess” in Tibetan, the mountain is the westernmost peak of the Khumbu section of the Himalayas, and it lies 20 kilometers west of Mount Everest. Just west of Cho Oyo is the Nangpa La, a 5,500-meter glacier pass that is a major trade route between the Khumbu Sherpas and Tibet. 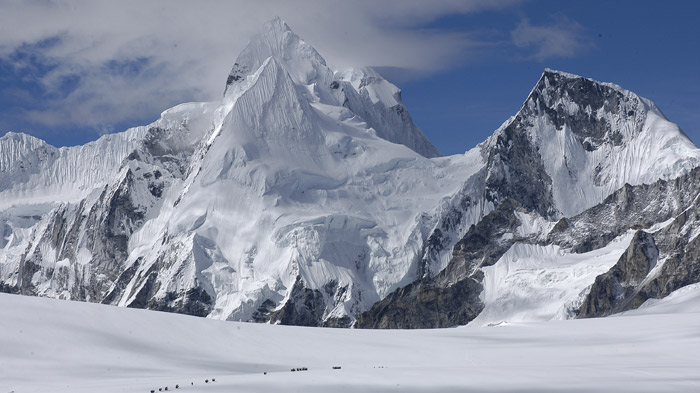 Cho Oyu is considered the easiest 8,000 meter peak to climb, and is a popular objective for professionally guided parties. With very few technical parts of the climb, and being less dangerous than the other 8,000 meter mountains, it is often covered in climbers in the peak season from March to May. For the best views of the peak, you can trek to the base camp, from where you can get a great view of the mountain, as well as good views of the mountains around, including Everest, Lhotse, and Ama Dablam. It is also viewed well from Kala Patthar and Gokyo Ri, which show the mountain in all its glory, from base to peak.