In 2019, Tibet Vista will continue its efforts to help all the tourists experience a real Tibet that is much different from what they see in a TV program. We will arrange for you the best itinerary to experience the most local Tibetan tour and see the raw Tibet in its original way. We have summarized over twenty top travel experiences on each tourists attraction within Tibet terrain for your reference, so you could choose whatever route as you please. What follows are the major tourists’ attractions and highlights of a Tibet tour. They are destinations and experiences that you shall not miss in 2019.

1. Wait for the First Sunshine in Quietness and Peace of Mind on Chagpori Hill

Chagpori, a sacred hill in Lhasa, is located at the south of the Potala and just to the left when one is facing the Potala. It is considered to be one of the four holy mountains of central Tibet. Stay at the hotel in Chagpori, you could get up early in the morning to breathe the chill morning air, and wait for the first sunshine in quietness and peace of mind. 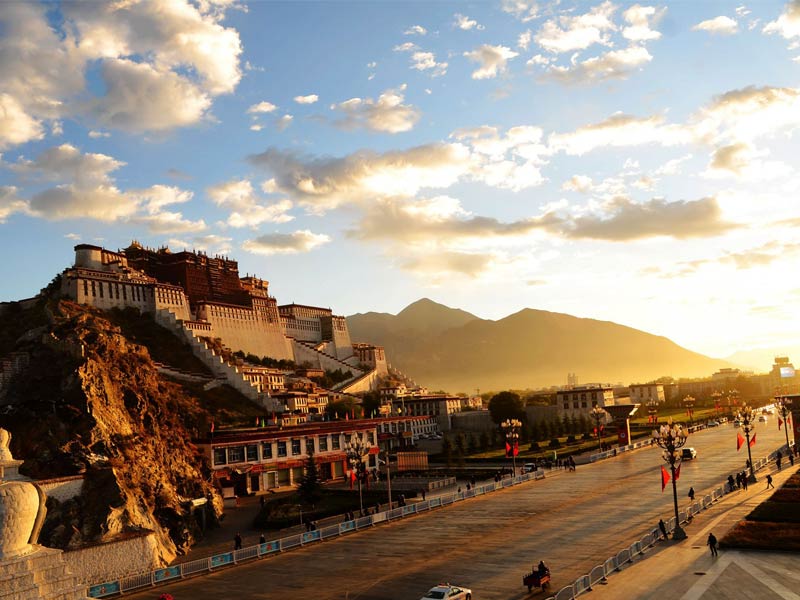 2. Listen to the Gentle Lapping and Gurgling of Holy Namtso Lake

Lake Namtso, it is a mountain lake on the border between Damxung and Baingoin counties, about 112 kilometers away from Lhasa. Sitting at the bank of Lake Namtso, you could listen to the gentle lapping and gurgling of the lake water, and look at the snow-capped Nyenchen Tanglha Mountains in the far distance, reaping quietness seldom found in big cities. 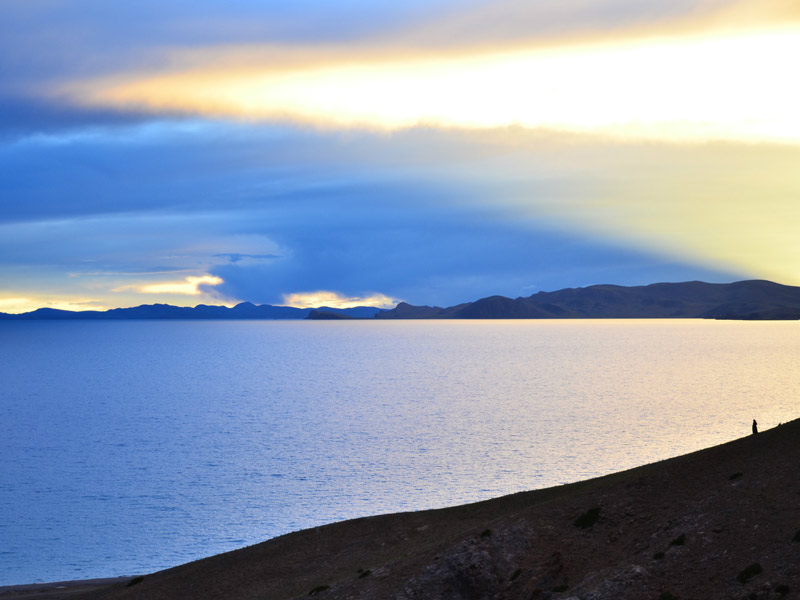 3. Spend the Night under the Dark Dome at Guge Kingdom Relics

Guge Kingdom Relics, an ancient kingdom centered in present day Zanda County. The disappearance of the kingdom has always been a myth yet to uncover. Tourists coming here could and feel the vicissitudes of life after all the glories and magnificence. 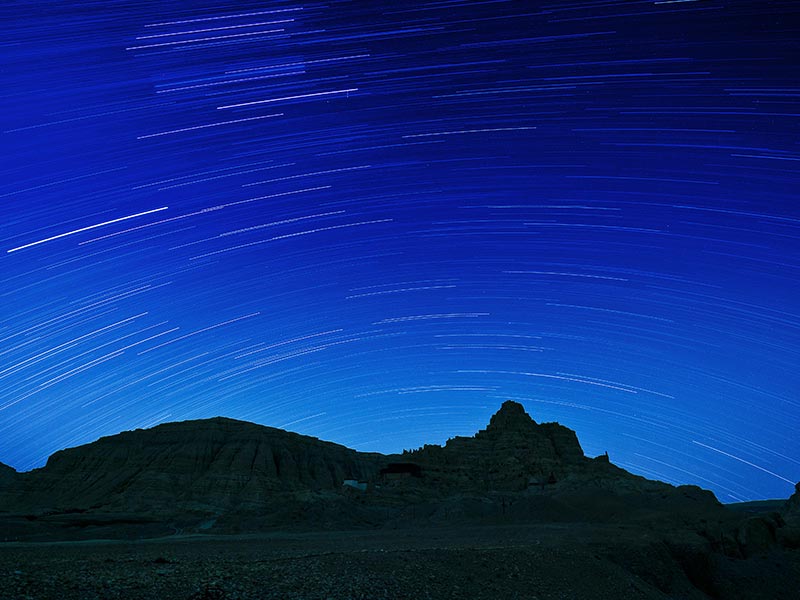 4. Reflect upon the Infinite Wisdom and Mercy of the Buda in Tashi Lhunpo Monastery

Tashi Lhunpo Monastery, founded in 1447 by the 1st Dalai Lama, is a historic and culturally important monastery in Shigatse. Wandering around and in this largest monastery in Shigatse, tourists could feel the gentleness just like walking in an ancient garden or a time-honored village. Everything here is so natural and serene that it is a perfect site for you to reflect upon the infinite wisdom and mercy of the Buda and a place to rest upon your tired heart. 5. Discover Your Previous Life and Foresee Your Next Life in Lake Lhamo Latso

Lake Lhamo Latso, a small oval oracle lake located in the Gyaca county, is considered to be the most sacred lake in Tibet. Senior monks of Gelug sect go this lake for visions to determine the birthplace and direction of reincarnations of Dalai Lamas. It is the place where we could discover our previous life and foresee our next life, and a lake where you could clean your soul and wipe out dusts in your mind. 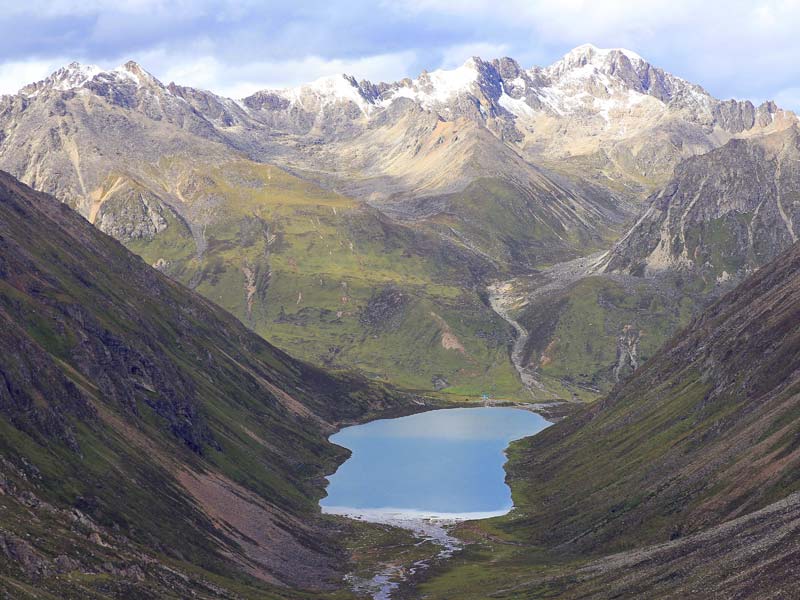 Lhamo La-tso is a brilliant azure jewel set in a ring of gray mountains.

Nyingchi, a prefecture-level city in southeast Tibet. In Tibetan language Nyingchi means “where the sun rises”. It is a place located at the lowest altitude in Tibet. Tourists could experience the elegant pastoral life here as if you were in the south of the Yangtze River. It is a lost Shangri-la where the natural beauty finds its full expression in March and a place seldom disturbed by outside intruders. Bomê is a county of the Nyingchi in southeast of Tibet. Spruce Forests in Bomê is rated as one of the top ten most beautiful primitive forests by National Geography of China. Here tourists could breathe the fresh and cool forest air–a natural oxygen bar. When you dig into the depth of the forests, you will enjoy watching the tranquil streams wrapped in fogs and mists as well as the vibrant fauna and flora. (At present, foreigners are not allowed to enter into Bomê forests.) 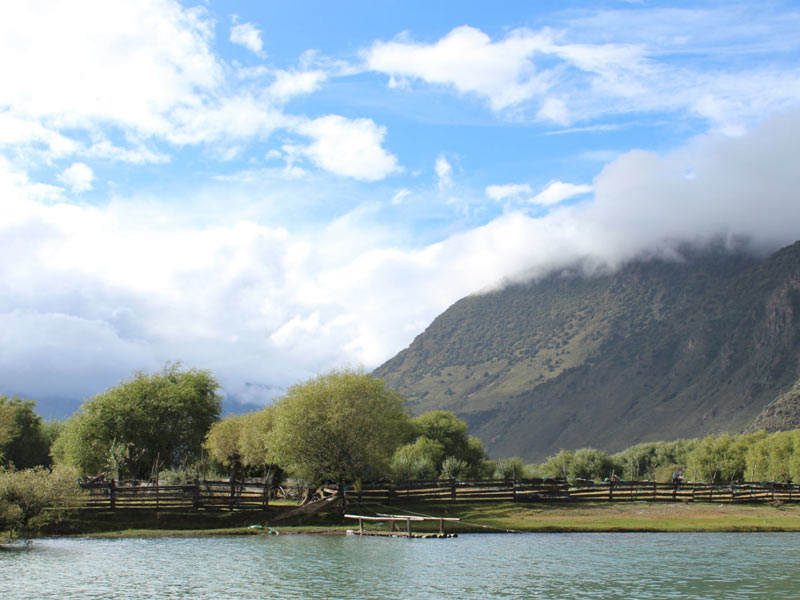 8. Paddle a Boat Along the River and Play the Jade-like Water in the Nyang River

Nyang River is a major river in southwest Tibet and is the longest tributary of the Yarlung Tsangpo River. It joins the Yarlung Tsangpo in Cemeng. The river is seen by the natives as “a sad tear of the Holy Mountain” while its plantations along the banks are carefully preserved. Visiting tourists may paddle a boat along the river and play the jade-like water and free your hear from the clamors of the big cities. 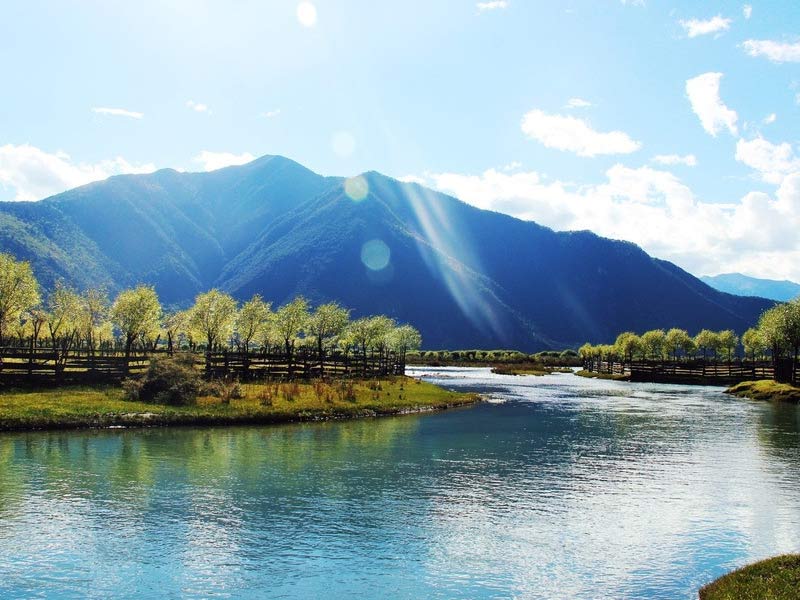 Niyang River, one of the most beautiful rivers in Tibet

9. Find Your Spiritual Nirvana in Lhasa

Spin the prayer wheel: It is the main activity for most Tibetan Buddhism believers. There are many routes in Tibet for the practitioners to spin prayer wheels. When the Buddhist believers creep their way forward during the pilgrimage, they would stand up to spin prayer wheels until the whole route ends. Go and see the enthusiasm, the piety and the faith of these believers and find your spiritual nirvana in Lhasa. Baptizing your soul and finishing your spiritual journey in a holy city as Lhasa will make your life meaningful and complete. 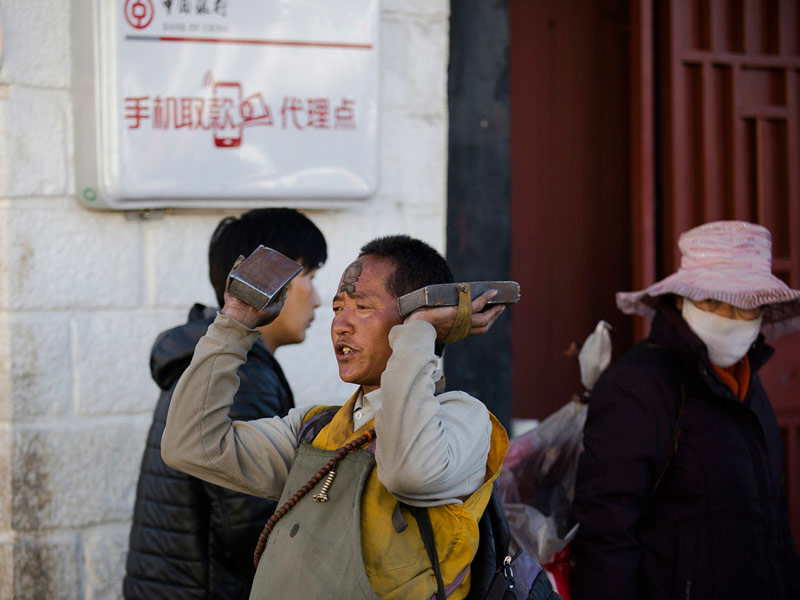 Making a pilgrimage to Lhasa

10. Sit in the Temple Watching Sutra-Debate in Sera Monastery

Sutra-debate in Sera Monastery: Sutra-debate is a religious practice that Tibetan Buddhism monks would do as their routine lessons. It is always carried out in the clearing of the monastery. In a clear day, you will see the lofty pagoda and tower tops shinning in the sunshine – a simple pleasure many tourists pursue. Then you could sit in the temple watching the debate, you will be spiritually enlightened by their languages and their bodily gestures. Isn’t it a peculiar experience in a remote country that is more than thousands of miles away from your hometown? 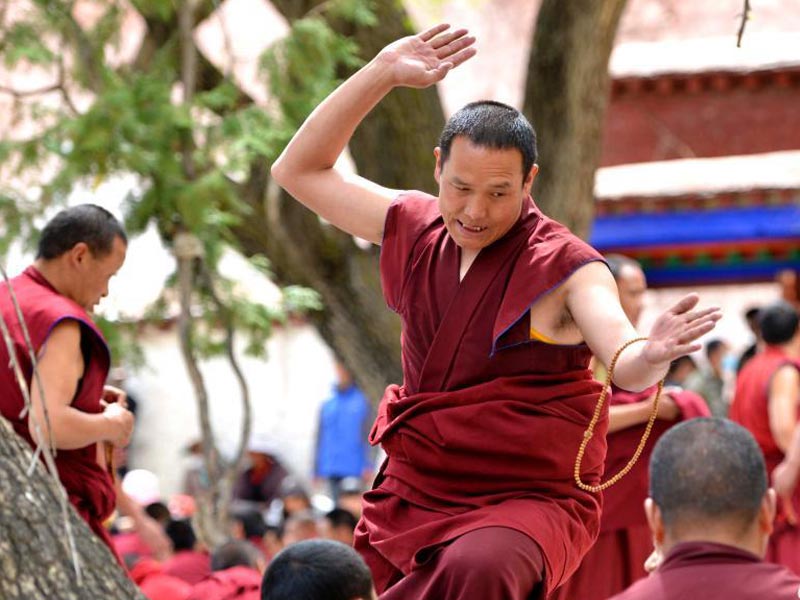 Monks are debating at Sera Monastery.

Lake Basum, in Tibetan language means “green water”, is a sacred lake for the Red Sect in Tibet. The lake is renowned for its clear green water and is enveloped by snow mountains around it. It is just like a green jade embedded in the grand canyons and valleys. You could watch fish gliding in the green water in summer water and put up a tent along the river bank in autumn, listening to the chuckling of the current and play with the squirrels outside your tent. 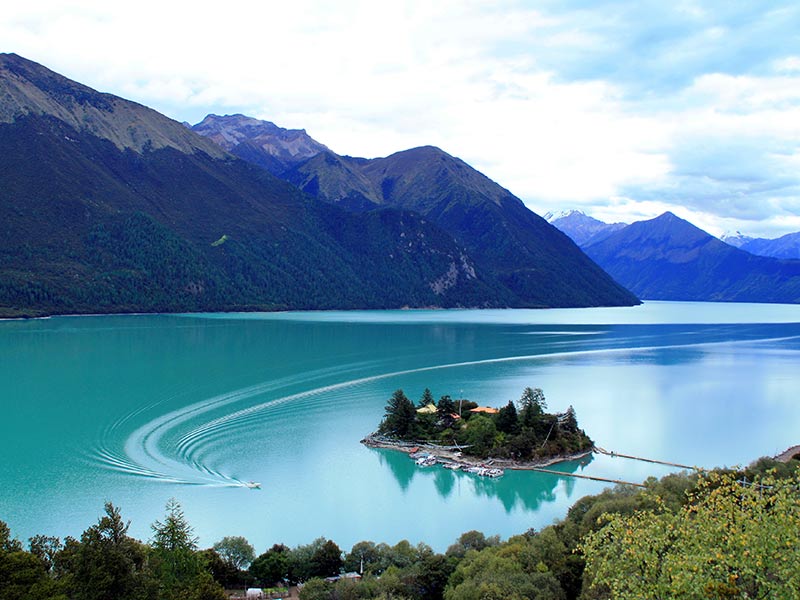 Lake Basum is the sacred lake of Nyingma Sect in Tibetan Buddhism.

12. Discover the Myths and Legends about Mt Namcha Barwa

Mt Namcha Barwa is the highest peak in Nyingchi. The mountain has always been renowned for its mysterious appearance because all the year round the peak is wrapped in the snow and mists. Join our samll group tours we would show you the myths and legends about it, its magnificent landscapes and towering frame. You will be overwhelmed by its loftiness and its natural nobility. 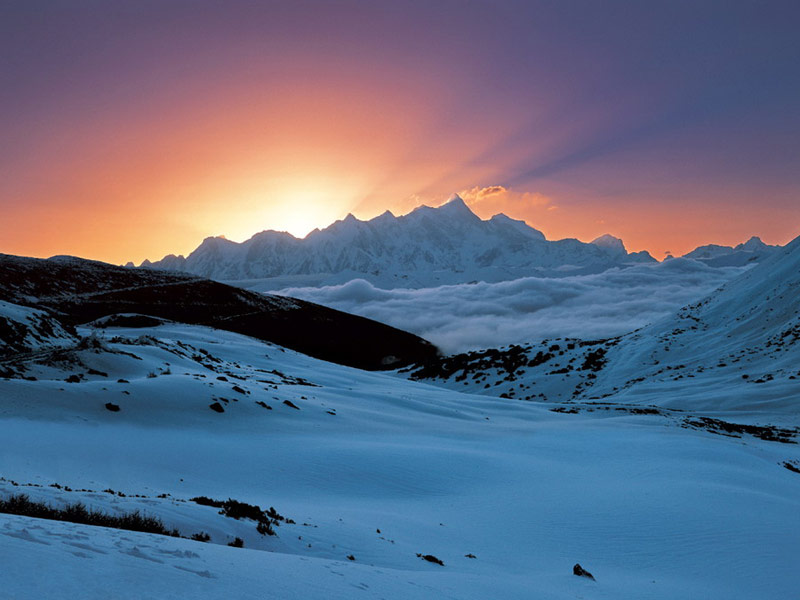 Mount Namjagbarwa, the most beautiful snow-capped mountain in China

Yumbu Lakhang Monastery is an ancient structure in the Yarlung Valley in south Tibet. Touring around the temple tourists could feel its simplicity, its oldness and its time-etched history. To discover the austerity and nobility of a time-honored temple makes your trip to Tibet so meaningful and worthwhile. Isn’t it the purpose of all the tourists come from afar to look for? Yumbulagang is considered the oldest building in Tibet.

Jokhang Monastery: The most prestigious Buddhist temple in Barkhor street in Lhasa. Tibetans consider it as the most sacred and important temple in Tibet. As the highlights and landmark of Tibetan tourism, tourists could feel the reason why this old temple is considered as the core of Tibetan Buddhism. Here you will understand the proverb that “Jokhang Monastery comes the first and then the Lhasa city”. 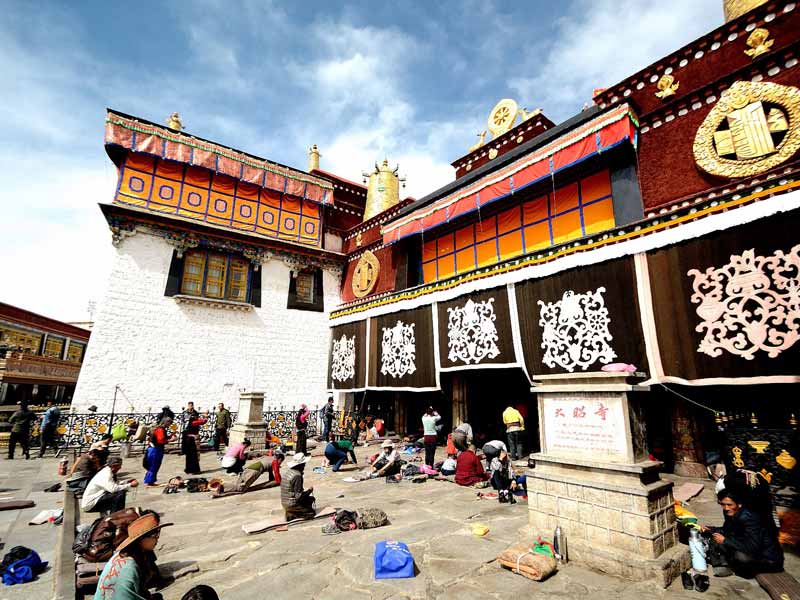 15. Mt Kailash – A Place You Get Closer to the Mysterious Celestial Burial

Mount Kailash: the main peak of the Gandise Range. In Tibetan language it means “the Gem of the Snow Mountain”. Here tourists may see the whole frame of the mountain-a mountain no one has ever reached its peak in the world. Here we could show you the mysterious celestial burial stand in Mt Kailash, a unique practice nowhere could be found in other parts of the world. Mount Kailash is the most famous holy mountain in Asian history.

16. Makye Ame Tavern – Look for the Romantic Love Story of the Makye Ame

Makye Ame: The famous yellow two-storey restaurant located at the southeast corner of the Barkhor Street. Here tourists could come to look for and retrospect the romantic love story of the Makye Ame (from whom the tavern gets its name). This is the place where you could experience the petty bourgeoisie way of life with its Nepal, Indian and Tibetan cuisines and warm bar atmosphere. Located in the southeast corner of Barkor Street, Makye Ame is famous for a romantic legend.

17. Lulang – a Place where You may Forget Your Hometown

Scenic Spots: eighty kilometers away from Bayi town in Nyingchi. Lulang is praised as “a bright pearl” along the No.318 National Road. A natural oxygen bar, a biological gene warehouse and a place where God resides. Here you will see Lulang as a proverb depicts it: When you come to Gongbu Lulang, you will forget your hometown.” With an elevation of 3700 meters, Lulang Forest is a typical plateau-mountain-meadow.

18. Nagqu, A Place You could Watch the Horse Racing

Horse race in Nagqu: a traditional festival in Naqu for horse racing. It is held in 10th, August every year. Here tourists could enjoy watching the horse racing in a golden season as in August. You will see herdsmen coming from near and afar to join the festivity with their tents, traditional costumes and delicate ethnic decorations to compete in the festival. 19. Mt Everest – Watch the Greatness of the Highest Peak in the World

Mt Everest: the highest peak on earth, attracting numerous mountaineers to ascend its summit every year. It is the roof of the world; a mountain that is closest to the heaven, waiting to be surmounted by daring adventurers. Here tourists could stay in Everest Base Camp to experience its harsh and beautiful environment and the greatness of the highest peak on earth. Our clients are taking photos in front of Mount Everest.

20. Lake Yamdrok – a Fairy Land where You may Forget the Pass of the Time

Lake Yamdrok: one of the three largest sacred lakes in Tibet, the freshwater lake at the highest altitude in the world and always an ultimate dream of tourists. Lake Yamdrok boasts of picturesque scenery with its lake and mountain landscapes. You are like staying in a fairyland where the lake, the snow mountain and the blue sky mingled together that makes the visitors forget the elapse of the time. 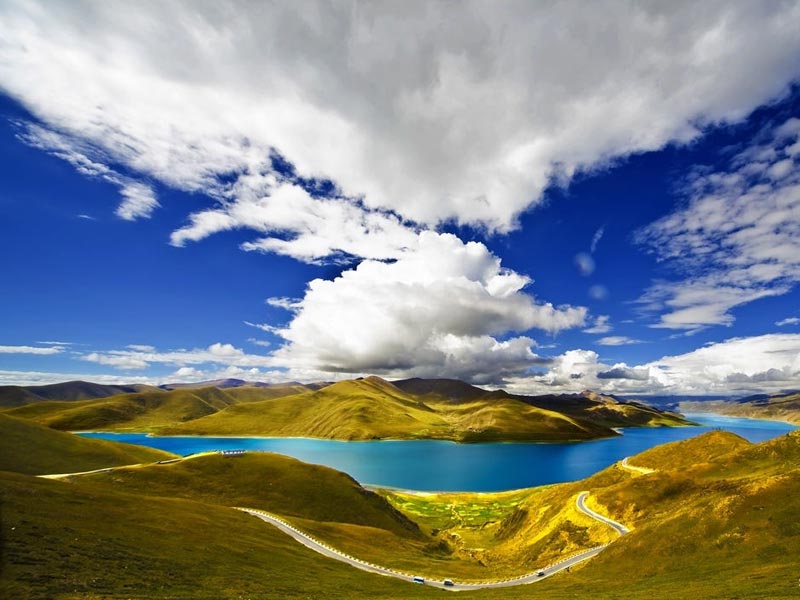 Lake Yamdrok, one of the three holy lakes in Tibet

From Lhasa to Katmandu overland: 1.The most convenient way to Katmandu from Lhasa would be the direct bus journey. The bus would depart every Friday in low seasons and add another one in Tuesday in hot seasons. It takes about two days with traffic fees of RMB580. 2. Take the bus to Shigatse and spend a night there and then take another bus to Gyirong Port and stay there for another night, then you could depart. Traveling overland from Lhasa to Kathmandu

Toilets in Tibet – Small yet Matter Big to Your Tibet Tour

Adding Colors to Your Tibetan Tour: 8 Top Films about Tibet