Traveling to Tibet in the winter months does have its advantages, such as cheaper accommodation, discounted flights, lower train ticket commissions (than in summer), and fewer tourists crowding the amazing attractions of Lhasa and Mount Everest. But what can you do in Tibet in the winter months? Where can you go and what can you see, and what places are off limits due to the extreme cold and snow? Here, we give you the rundown on the top questions about Tibetan winter tours.

1. Is it too cold to visit Tibet in winter (December to February)?

Many people have the misconception that winter in Tibet is freezing cold, with high winds and icy temperatures, and that the plateau is covered in snow for the whole winter. And they could not be more wrong. Admittedly, it can get cold in the winter months, but not as cold as many people think. While it is called the “third pole”, it is nothing like the other two poles in terms of winter climate. 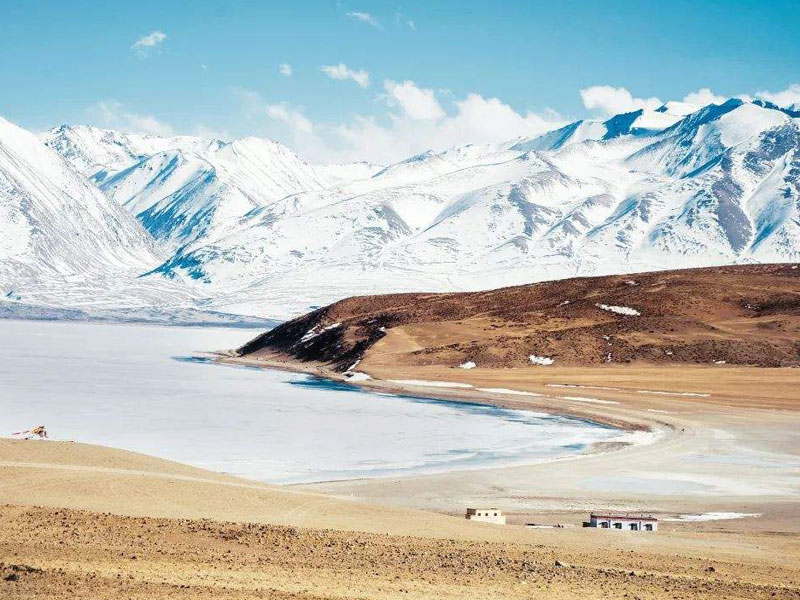 The attractive snow view of Tibet in the winter season.

Winter weather and temperatures in Tibet depend on where you are on the plateau and what part of winter it is. The winter season runs from December to the end of February, and for international tourists, February is usually a closed month for Tibetan tourism. And since February is the coldest month of the year, then you are unlikely to experience the extremely cold temperatures of the western areas of Tibet.

From December to the end of January, the weather in Tibet can be cold, but thanks to the high altitude and thinner atmosphere, it can also be quite warm during the daytime. Tibet always has a wide temperature differential from day to night, and the nighttime temperatures are often 10-15 degrees lower than during the day. The bright winter sun helps to warm the air and the land, and daytime temperatures can be comfortable and pleasant.

The temperatures do change greatly from east to west of the plateau, and while it may be warm and pleasant in Nyingchi, Lhasa, Chamdo, and Shannan, it is a little colder in Shigatse, and a lot colder in Nagqu and Ngari. In the west, daytime temperatures range from 0-7 degrees, with nighttime temperatures dropping as low as minus 15 degrees. However, that does not mean that you cannot visit. With warm clothes and a good arctic-rated sleeping bag for the nights, a trip to the winter wonderland that is Tibet is definitely worth a little chill.

2. What to see in Lhasa Tibet winter?

Lhasa does not really see much snow, even in the depths of winter, and when it does snow, it is usually just a light dusting, though it does make the city look even more exotic and exciting than ever. A little dusting of snow in Lhasa makes little difference to the places you can visit, and all the attractions of the city are open throughout the year. There are even some discounts to be had on entrance tickets for some of the attractions. If you travel to Tibet in winter, you will encounter the many pious pilgrims around the Jokhang Temple.

Lhasa has a host of things to see and do, and while the winter months bring out the pilgrims that make their long journeys from across the plateau to pray and prostrate in front of the Jokhang Temple, it also brings out the friendlier side of the local people. Winter is the “downtime” in Tibet, when the harvest is over, the planting for the next season has already been done, and there is little for the farmers to do. You can find many more people enjoying some relax time in the teahouses of the city, and it is a great time to talk to the people more and learn more about the unique Tibetan people and culture.

Potala Palace is the iconic site of Tibet, and the former center of governance of the region. And it is still open throughout the winter months for the intrepid travelers that brave the plateau winter to enjoy the Tibetan capital without the crowds of people. Jokhang Temple may seem really busy, but it is mostly pilgrims praying and performing the kora around the temple, following the ancient route that is now Barkhor Street. And even this amazing street of traders is still open through the winter months, so you will have no trouble getting those essential souvenirs of your trip.

>> Tibet Snow: when it snows usually? how to plan a trip to enjoy snow in Tibet?

3. Is it possible to visit Lake Namtso in winter?

Lake Namtso can be visited for part of the winter months, but once the snows close in the northern part of Lhasa and southern Nagqu, it can often close off the roads and passes, making it impossible to get to the Heavenly Lake. If you are planning a winter trip and want to visit Lake Namtso, it is better to do it in December and early January at the latest, to try and avoid the heavier snowfalls. However, even this cannot be guaranteed, as snow does not have a schedule in Tibet.

4. Is it ok to visit Everest Base Camp in winter? How about EBC accommodation in winter?

Simply put, yes, it is ok to visit Everest Base Camp (EBC) in the winter months of December and January. Again, February is normally off limits to international tourists, but for the rest of the winter, EBC can be accessed easily, unless there is an unexpected and heavy snowfall. The road to EBC runs right up to the base camp itself, and while the last few kilometers may be gravel track, the rest of the road from Lhasa to Mount Everest has a good asphalt surface, making travel easier and better. A tour to Everest Base Camp in winter would be a wonderful travel experience in your life.

Snow at the base camp only adds to the picture, making it an even better shot for the photography enthusiasts, and a more stunning view of the mountain in the background. However, unlike in the summer months, you cannot stay at the base camp itself during December and January. The tent hotels that are available in the rest of the year have packed up for the winter, so your only option for accommodation is the Rongbuk Monastery Guesthouse, around 8 kilometers from the base camp. But with fewer tourists, it is rarely full at this time of year.

5. Can I trek Tibet in winter? If possible, any Tibet trekking routes recommend?

Yes, there are plenty of places in Tibet where you can still trek in the winter months. The route from Old Tingri to EBC is still open for December at least, and unless there has been heavy snow, can still be trekked to the base camp. However, the Advanced Base Camp trek is no longer possible in winter due to the extreme temperatures of Mount Everest in winter. Further east, around Lhasa and Shannan, however, there are plenty of treks that you can take, including the route from Ganden Monastery to Samye Monastery, Lhasa outskirts hike, etc.

6. Can I visit Kailash in winter?

Mount Kailash, the center of the universe and the world’s most sacred mountain, is open for tourists in part of the winter period, though there may be times later on in winter when getting there is hard, and trekking the kora is impossible. Lying in the far west of Tibet, in Ngari Prefecture, the sacred mountain lies in an area that gets a lot colder than Lhasa, and the region around the mountain, which lies in the Gangdise Range, often sees snow from around mid-January. It is still possible to travel to the mountain and trek the kora route in December, though it is a little colder.

7. Are there any traditional Tibetan festivals celebrated in winter?

While most of the festivals in Tibet are held from April to October, there are also some that run later in the year, and these are some of the greatest festivals in the region. The most popular, and largest, is the Losar Festival, which is the Tibetan New Year, which happens in February and lasts for around two weeks. The New Year is an important celebration in Tibet, and marks the coming of the new year and a new beginning. 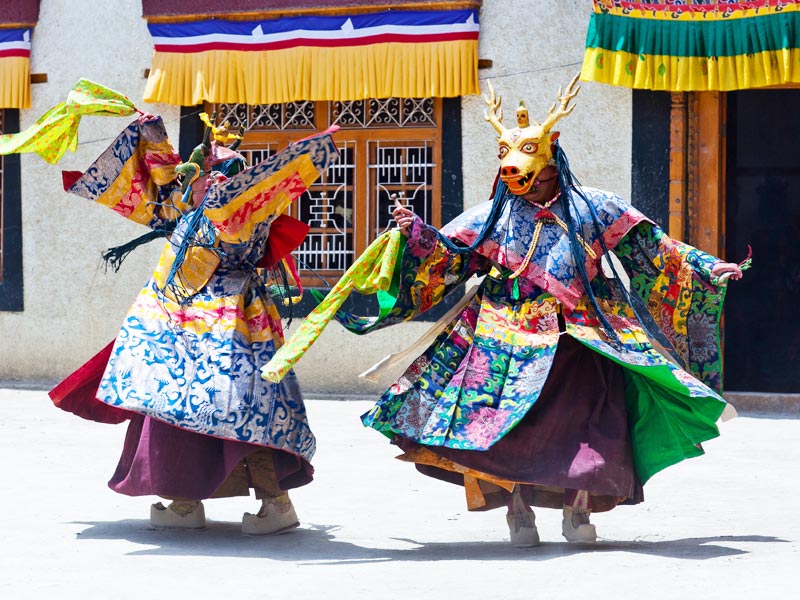 Dancers are performing dancing to celebrate the Tibetan New Year.

The Palden Lhamo Festival is one of the traditional folk festivals in Tibet, and is an important date in the Tibetan calendar. The festival happens on the 15th day of the tenth lunar month, and is held to celebrate the protector deity of Tibet, a wrathful fairy deity known as Palden Lhamo. Palden Lhamo is known as not just the protector of Tibet, but also as the defender of Tibetan Buddhism throughout Tibet and into parts of mainland China and Mongolia.

Known as the Ganden Ngachen Chenmo Festival, the Tsongkhapa Butter Lamp Festival is an important celebration in Tibetan Buddhism, which falls on the 25th day of the tenth month of the Tibetan calendar, usually in late November or December. Celebrating the birth, enlightenment, and death of the founder of the Gelug School of Tibetan Buddhism, Je Tsongkhapa, the festival sees butter lamps being created and lit all across Lhasa and in Ganden Monastery, which burns night and day for around four days.

8. What to pack for Tibet winter travel? Any suggestions on Tibetan winter clothing?

While the winter in Tibet is not as harsh as many people think, it can still get very cold here, and you will need to have some warm clothing to combat the chill, especially in the evenings and overnight, when the temperature drops dramatically and rapidly. A warm sunny day with temperatures of around 7 degrees can drop to well below freezing once the sun goes down.

Warm long underwear is necessary most of the time in the winter, as it can get a little chilly in places with the winter winds. You will also need some warm strong boots and woolen socks, as well as a few sweaters and a nice warm jacket, for the evenings. IF you are staying in the outlying areas in guesthouses, you may want to bring a good arctic-rated sleeping bag with you, as the few blankets will not be enough, and most places outside the major cities do not have heating.

You should also make sure you have thermal gloves to keep your hands warm in the chilly winds, as well as a good warm hat, and neck scarf to keep your throat from feeling the cold. It is also better to have many thinner layers to keep warm in the winter months than just a few thick payers, as it traps the heat better and keeps you warmer.