Sakya Monastery, Do I Need to Add it to My Tibet Trip or Not?

Sakya Monastery is the seat of the Sakya Sect, one of the four major schools of Tibetan Buddhism. Situated at about 4,300 meters on the way from Shigatse to Lhatse, this monastery is quite worth visiting especially for those heading for Everest Base Camp.

A stunning monastery that was built in the 11th century AD, the walls of this unique Buddhist temple are a typical red-brick color, trimmed with yellow adornments and topped with golden roof spires. The monastery is more of a combination of Nepali and Tibetan architecture than having much influence from Chinese architecture, with few of the typical pagoda-styled roofs in evidence. The monastery was built in 1073, and lies on one of the sites where the Indian sage Atisha is said to have rested and seen visions of the future emanations of Avalokiteshvara, Mahakala, Manjushri, and Vajrapani, who he said would be born there. A small shrine was erected first, and then the main northern monastery was constructed several decades later, by the Nyingmapa lama, Khon Khonchong Gyalpo. The southern monastery, on the other side of the Zhongqu River, was built in the late 13th century, and grew to its current status over the centuries since with many additions.

The southern monastery was commissioned by one of the founders of the Sakya School of Tibetan Buddhism, Choygal Phakpa, who insisted that the walls be painted red, white, and grey in honor of the Buddhist Tulkas. The Sakya School is important in Tibetan history, as it was the Sakya Pandita who was requested to teach Buddhism in the court of Kublai Khan, the Mongol Warlord, which introduced Vajrayana Buddhism to China.

Why visiting Sakya Monastery is recommended

Sakya Monastery is the head monastery of the Sakya School, and has a long and famed reputation as one of the best learning centers in ancient Tibet. This unique monastery is well worth visiting on a tour of Tibet, and should be added as an additional itinerary item, if you can.

You can see invaluable treasures at Sakya Monastery

Known locally as the “Second Dunhuang”, after the famous Dunhuang Mogao grottoes in northern China, this amazing monastery has a library of more than 40,000 Buddhist texts and books. The cloister of the monastery is home to many thousands of volumes of the ancient sacred Buddhist scripts, including many of the first translations from Sanskrit to Tibetan. A single bookshelf along the walls of the library holds more than 10,000 scrolls and scriptures, and each bookshelf along the length of the library is around 57 meters long, and stand eleven meters high. The library in Sakya Monastery houses more than 40,000 Buddhist scriptures.

The library is also the home of the largest book of scriptures in the world. Known as the Burde Gyaimalung, the book is six feet long, four feet wide, and around two feet thick. A unique record of the history, culture, philosophy, religion, and literature of Tibet, this massive book weighs more than five hundred kilograms.

Other treasures that can be found inside this amazing monastery include the famous four sacred pillars, which can be found in the main assembly hall. Made from entire tree trunks and carved with intricate designs, the pillars are famous across the plateau. It is even said that one of the pillars was a gift from Kublai Khan to the Sakya monastery. The famous White Conch Shell was also a gift from the Mongol warlord, which was brought from India and is set in a mandala box in the center of the hall.

You can experience magnificent religious ceremonies at Sakya Monastery

One of the best times of the year to visit the monastery is during the religious festivals that are held in the grounds and courtyard of the unique monastery. The famous Cham Dance Festival is one of the main highlights of the Buddhist calendar at Sakya Monastery, and is held in July for around 10 days. The festival features dances from the lamas and monks of Sakya, with intricate masks to perform the holy dances, which are often stories of the deeds of the Buddhist saints. 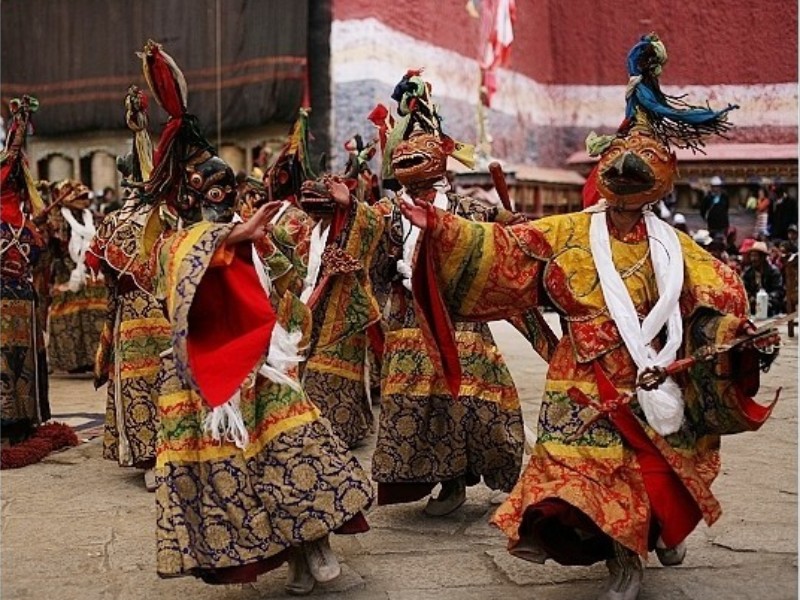 The Basiba Cultural Festival, which is held in the Basiba Square in front of the temple at Sakya, and celebrates the period of Sakya dominance in Tibet in the 13th century. And the monastery is also one of the few places in Tibet that has a different New Year festival, In Sakya, the New Year is actually held on the first day of the tenth month in the traditional Tibetan calendar, and is a huge celebration in the area around the monastery.

It is very convenient to visit Sakya Monastery

Visiting the Sakya Monastery really is more convenient that you might imagine. Lying just about 30km off the main Friendship Highway on the way from Shigatse to Tingri, it is very convenient to add Sakya Monastery into your Tibet trip as you head west through Tibet.

The monastery makes a great little addition to the usual tours across the plateau, and you can even stop overnight at Sakya County, where you will find decent accommodation and some delicious foods. The town around the monastery, which has grown up over the centuries, may be set off the main route through Tibet in a somewhat remote area, but it has some great places for you to stay. The few hotels that the town has are well furnished and are considered to be quality accommodation. The hotels in the town include the Sakya Manasarovar Hotel and the Sakya Lowa Hotel, which are both modern-designed hotels. 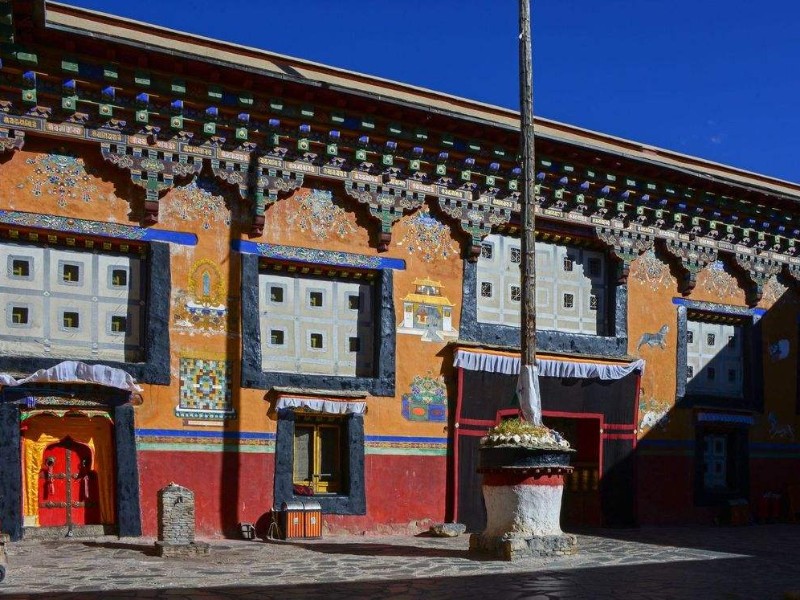 You can appreciate the delicate and colorful walls inside Sakya Monastery.

Food in Sakya can be found in the hotels, most of which have their own restaurants, and in the small cafes and restos that are dotted around the town. Most of the food in the cafes is local Tibetan cuisine, while that of the hotels does vary a little more, with some Chinese dishes available. However, you should be aware that there can still be some water shortages due to the remote location, and food can occasionally be limited due to the limitations in obtaining ingredients this far from the larger cities.

What’s more, situated at about 4,300 meters above sea level, visiting Sakya Monastery and staying overnight at Sakya offers an opportunity for tourists to better acclimatize to the altitude before heading for Everest Base Camp. You can visit Sakya Monastery by joining 9-day tour from Lhasa to EBC, which incorporates a trip to Sakya on the way to Mount Everest, and our 8-day Lhasa to Kathmandu tour, which takes you to the Sakya Monastery as you travel across the Tibetan plateau to Nepal, and the 9-day Kathmandu to Lhasa tour, taking you to visit the monastery after departing from EBC and before you head into Shigatse.

As one of the oldest monasteries in Tibet, not to mention being the founding monastery and seat of the Sakya tradition of Tibetan Buddhism, this unique monastery is well worth a side-trip off the beaten track to discover the beauty and treasures it contains. So if you are heading across the plateau, take a short ride down the small road that runs to the monastery, and discover the wonders that this amazing temple holds.

Small and Simple, Why Rongbuk Monastery is Still the Must-see Site for any Tibet Tour?

Tibet Travel Restrictions You Should Know Before Visiting Tibet

0 Comment ON "Sakya Monastery, Do I Need to Add it to My Tibet Trip or Not?"