On the high-altitude plateau, known as the Roof of the World, Tibet has become one of the most sought-after destinations in Asia for discerning tourists. A land of lakes and mountains, rivers and valleys, and filled with devout Tibetan Buddhists, this unique region is a head and shoulders above the rest, literally.

Travel to Tibet can be done at almost any time of the year. And when to travel usually depends on what you want to see, where you want to go, and many other factors. However, if peace and quiet to tour this beautiful and unique region is what you are looking for, then winter may be the best time for you.

Why We Shouldn’t Miss Visiting Tibet In Winter?

Tibet has a lot to offer the discerning traveler, even in the winter months, which run from December to the end of January for international tourists. And while many people live under the misconception that Tibet is too cold to visit in winter, thousands of travelers have made the journey to the roof of the world to find out for themselves how wrong that idea is. Winter in Tibet is often thought of as being sub-zero all the time, and covered in deep snow. However, the truth is very different. While it can get very cold, especially at night, Tibet in winter is a delightful place to visit, and the ideal place for a little peace tranquility, and spiritual awakening.

Winter weather in Tibet varies across the region, with the harshest weather being in the far west and north of the plateau, and the mildest winters being found in the eastern areas, such as Lhasa and Nyingchi. Temperatures during the day, even in the far west, can be comfortable, and even warm, as the bright sun through the thinner atmosphere makes the days warmer than you might expect. In Lhasa, daytime temperatures in winter can reach as high as 10 degrees, while out in the west, around Mount Everest, it can get up to around 6-8 degrees during the day. 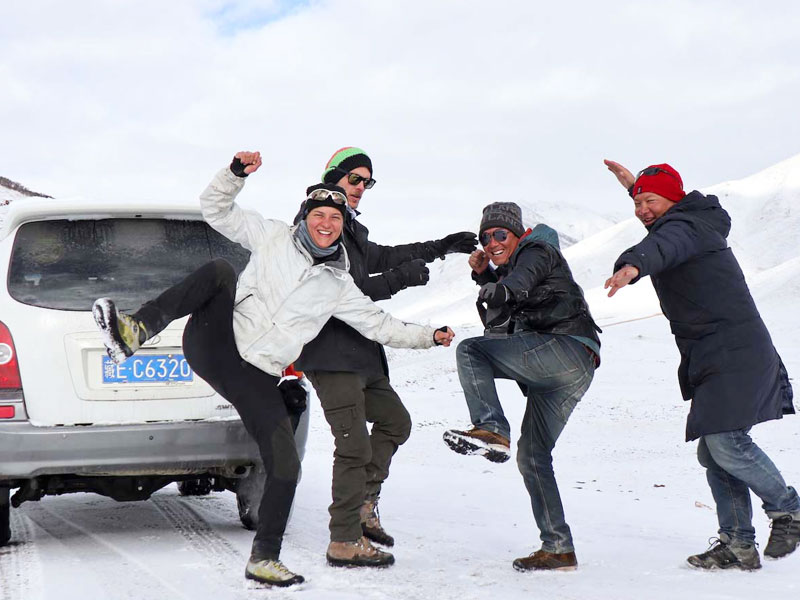 Traveling to Tibet in winter enables you to experience Tibet travel in a completely different way.

However, it is at night that you will feel the cold most, when the temperatures drop drastically. Because of the high altitude and thinner atmosphere, there is little to keep in the warmth of the day once the sun goes down, and there is a huge temperature difference between day and night. In Lhasa, the Tibetan capital, the temperatures at night in winter can reach as low as -9 degrees, while out in the far west, in the cold and desolate Ngari Prefecture, the temperatures can drop to as low as -20 degrees, which is often too cold to travel in. There are some areas of Tibet that are not ideal for winter tours, though even at Mount Everest, with the cold nights, it can be a great time to visit the base camp.

Another advantage of traveling to Tibet in the winter is the tourist numbers. Since most people believe that winter is too cold to go to the plateau, there are fewer tourists around the cities and attractions, which makes it more peaceful and pleasant for people that are not overly fond of crowds. In the peak summer months, from July to September, Lhasa can become very crowded with thousands of tourists, both international and Chinese, crowding around the sights and attractions, making it harder to enjoy the stunning sights of the city. Winter is also the time for pilgrimage in Tibet, as the majority of pilgrims from the remote areas have no crops to tend to at this time of year. Pilgrims in Lhasa number in the thousands in winter, and it is an amazing sight to see these devout Buddhist pilgrims making their ritual walk around the famous Jokhang Temple in Lhasa.

You also have the advantage of the various discounts that are available in the winter months, where many hotels, flight operators, and attractions have discounts or reduced prices because of the low tourist season, to try and attract more travelers. This can make the trip much more affordable if you are traveling on a budget.

Top Nine Things to Do in Winter Tibet

If you are thinking of traveling to Tibet in winter, here are some great places to visit while you are touring around the highest plateau on the planet.

Potala Palace is an amazing sight at any time of the year, and can be clearly seen as you come close to Lhasa on the train. Sitting on the Red Hill, known in Tibetan as “Moburi”, this stunning red and white palace shines in the sunlight, and is one of the most photographed attractions in Tibet. And in the winter months, when the trees are bare of leaves and there is a little frost on the ground to add flavor to your photos, it is one of the best times of year to get those all-important shots of Tibet’s second most iconic landmark. A winter tour to Tibet will offer you an amazing view of the magnificent Potala Palace.

Jokhang Temple is the most sacred Temple in Tibet, and is the destinations of thousands of pilgrims that make their way across the plateau on foot every year, some traveling several hundred kilometers to get there. Even in the winter months, the square in front of the temple is bathed in sunshine, as Lhasa is well known as the “City of Sunshine”, with an average of more than 20 sunny days a month. Sitting in the sun and watching the amazing sight of pilgrims prostrating in prayer in front of the temple is one of the most stunning sights in the world.

Around the Jokhang Temple is the ritual kora route, a circuitous trek for devout Buddhists that is part of the religious culture of Tibet. A kora runs around almost every sacred and holy site, and by making the ritual walk around the site, Buddhists gain merit on their journey towards enlightenment. The kora around the Jokhang Temple runs along the famous Barkhor Street, which runs all the way around the temple, and you can join the pilgrims on their ritual walk and learn more about Tibetan Buddhism, while doing a little shopping in the huge number of shops and stands that line the street.

Tibetan sweet tea is unique in the world, and is made from black tea leaves infused with yak milk and white sugar to make a creamy, hot, deliciously refreshing drink. Tibetans love tea, and drink it throughout the day, even to the point of carrying their own tea bowl inside the folds of their clothes. Lhasa is filled with teahouses, that are used in much the same way as the coffee shops of the US, where people tend to spend their afternoons drinking tea, meeting with friends, and gossiping or just reading the local papers. Teahouse culture is a major part of Lhasa life, and well worth trying out. Enjoying the Tibetan sweet tea with locals is a way to explore local life.

The largest urban-based wetlands in the world, Lalu Wetland in the west of Lhasa is one of the main bird sanctuaries for migrating birds from northern Tibetan and Mongolia in the winter months. Rare birds from northern Tibet, such as the black-necked crane and the ruddy shelduck, come to the wetlands in Lhasa every winter, to spend the colder weather in the milder climes of Lhasa, where there is a better chance of finding food. A great place for twitchers, the wetlands is perfect for those shots of these rare birds.

Losar, the Tibetan New Year, is the time of great festivities and fantastic feasts, as the Tibetan people celebrate the coming and start of the new year, and the promise and hope of a better and more prosperous year ahead. Losar is the most important festival in the Tibetan calendar, and lasts for around two weeks from the first day of the Tibetan New Year. Preparations even start up to two weeks beforehand, and there are some places in Sichuan, Yunnan, Gansu, and Qinghai where Tibetans live and hold this grandest festival.

One of the Great Three Holy Lakes of Tibet, Lake Yamdrok lies a short distance outside the Tibetan capital, around 100 kilometers to the southwest. A stunning lake spread over a vast area, the beautiful waters of the lake turn a deep shade of turquoise in the winter, just before they start to freeze over. The sight of the lake, which is believed to be the home of the protector goddess of Tibet, is one of the most spectacular sights in the region, and it is believed that, if the lake ever dries up, Tibet will no longer be habitable. 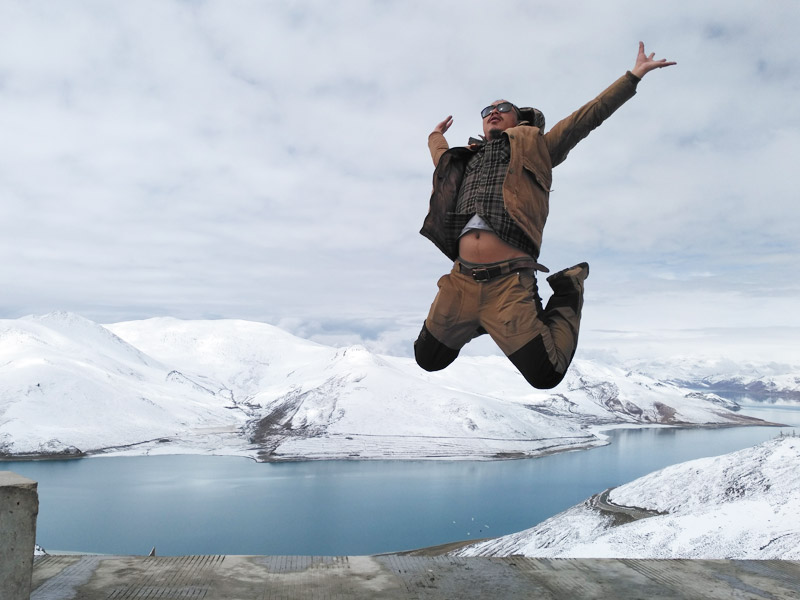 Yamdrok Tso Lake, one of the Holy Lakes of Tibet, looks more attractive in winter.

Far out in the east of Tibet, in Nyingchi Prefecture, lies the beautiful mountain known as Namche Barwa. Sitting in the eastern Himalayas, Namche Barwa is the highest mountain over 7,000 meters in the eastern end of this vast mountain chain, and sits at the entrance to the world’s largest and deepest canyon, the Yarlung Zangbo Grand Canyon. A stunning panoramic vista can be found a short distance from the mountain, where you can get a great shot of the mountain against the backdrop of its fellows, with the entrance to the canyon at its feet.

Enjoying the snow at Mt. Everest Base Camp

Who said that you cannot visit Mount Everest in winter? They could not be more wrong. While the weather can get cold out in the far west of Tibet, in the very depths of the Himalayas, the purpose-built asphalt road that leads right up to the base camp means that, unless there is an unexpected and heavy snowfall, it is easily possible to stand at the foot of the world’s highest mountain in the snow and get the world’s best photograph.

Traveling to Tibet in winter is not as bad as people think, and while it is a lot colder than in summer, there are many distinct advantages to traveling in the low season. Fewer tourists, better sights, and bigger discounts can be a very good persuader for a Tibet winter tour. However, while it is possible to travel in winter, you are advised to be aware that it is much colder, and bring warm clothes according to the weather and climate. Layers are better than thick clothes, as they keep the body heat in better and can be added or removed more easily.

While it may be pleasant in the winter sunshine, you should be aware that the sun is still strong enough to cause sunburn, and a good factor 30-50 sun cream is required unless you want to get a sunburn while traveling around. Hats are also a good idea, as the strong sun can cause heatstroke from the UV rays, which can make you very ill. Also bring some lip balm and moisturizer to keep your lips and face from getting dry and cracked in the fierce, cold winds.