The Tibetan calendar starts with the Tibetan New Year, which usually falls in around the middle of February, though the date is never the same from one year to the next. Composed of either twelve or thirteen lunar months, the thirteenth month is only added every third year, which means that the New year date is constantly changing. The year count is also different, and the start of the modern Tibetan calendar was dated as being around 127 BC, the time of the first Tibetan king, Nyatri Tsenpo, which means that 2021 in Tibet is actually the year 2148 in the Tibetan Buddhist calendar.

Losar, or New Year, is the single most important festival in Tibet, and preparations for the celebrations begin weeks before the start of the New Year. The actual celebrations start on the first day of the Tibetan luni-solar calendar, which corresponds with February 12 in the Gregorian calendar used in the west. The celebrations of the New Year are held across all of the Tibet Autonomous Region, as well as in Tibetan areas of other Chinese provinces, mainly in Qinghai, Sichuan, Yunnan, and Gansu. Local Tibetans were singing and dancing to celebrate the Tibetan New Year Festival.

The festival normally lasts around 15 days, with the final day being another important festival in the Tibetan calendar, the Butter Lantern Festival. The first day of New Year is the time when people celebrate with their families, and after a trip to their temple to pray and give thanks, they eat breakfast together, and spend the day at home playing games. On the third day, the family will change and replace all the prayer flags strewn over their house roof, setting up new ones to spread the blessings of the prayer flags across the world on the wind. The rest of the two weeks is spent in celebrations with family, friends, and relatives, until the final day, which celebrates Buddha’s miracle at Sravasti.

If you are able to travel to Lhasa during the period of Losar, then you are lucky enough that we have the ideal itinerary for the trip. Our 7 Days Tibet New Year Festival Tour gives you the chance to spend the first days of the New Year in Lhasa, the center of Tibetan culture, as well as traveling across the region, through Gyantse and Shigatse, to see how the festival differs in the different areas of the plateau. You can experience the various festivities of the different days while taking in the stunning sights of the plateau, including the famous 32-meter Gyantse Kumbum stupa and the Tashilhunpo Monastery in Shigatse, the seat of the Panchen Lama.

Falling on the 15th day of the first month of the year in the Tibetan calendar, which is February 27 in the Gregorian calendar, the Butter Lantern Festival marks the end of the New Year celebrations that have lasted for more than two weeks in Tibet. During the celebrations, Tibetans go to pray in their temples and monasteries, and in the evenings light lanterns and lamps made from yak butter as another form of prayer. The lanterns are all made by hand, usually by the people lighting them or local monks, and are sculpted into the shapes of animals, people, plants, and deities. The lanterns can attract people from neighboring areas, and some even stand as tall as a two-story house. One of the happiest times in Tibet, the festival celebrates the Buddha’s twin miracle at Sravasti, where he overcame his opponents and increased the number of followers of Buddhism.

Completely separate from the usual Losar festival that is held on the first day of the year in the Tibetan calendar, in Shigatse, they also celebrate the Tsang Losar, also known in the area as “Peasant’s Day”. Over 100 years ago, the people of this agricultural region of Tibet created their own calendar, which was more in line with the farming seasons of the Tsang area of ancient Tibet. Held on the first day of the 12th month in the Tibetan calendar, in 2021, this alternative Losar will be held on January 14 in the Gregorian calendar. Before the Shigatse New Year, the local market is booming with various festive goods in Shigatse.

The Shigatse celebrations are similar in form to those of the rest of Tibet during Losar, and the women of the Shigatse area keep their homes clean on the run-up to New Year to help keep in the good luck. One of the most iconic elements of the Tsang Losar is the ritual eating of gutu, a kind of dough dumpling filled with different items, which often includes wool, stone, charcoal, or capsicums. Each of the fillings has meaning as to what the coming year will be like for the eater, and if the person eats a gutu with wool in it, he is considered to be kind-hearted, while if the gutu has capsicum, he is thought to be harsh-tempered. If he eats a gutu with charcoal, he is deemed to be vicious, while a gutu with white stones means he is unpopular and will be forced to drink wine as a punishment.

Food during the Tsang Losar is primarily dominated by mutton, a popular meat in the area where sheep farmers are plentiful. The dishes usually contain boiled mutton, dried mutton, or roast mutton, and the style of dishes has changed from those of eastern Tibet, and are richer and more sumptuous. However, you will still find the traditional Guthuk being eaten on the days before the New Year.

Also known as the Ganden Ngachen Chenmo Festival, the Tsongkhapa Butter Lamp Festival is held on the 25th day of the 10th month of the Tibetan calendar, which is on December 29 in the western calendar. Another time when it is popular to light up the butter lamps on the Buddhist altars and temples, and in Lhasa even in the windows of people’s homes, the festival celebrates the “parinirvana” or death of the founder of the Gelug School of Tibetan Buddhism, Je Tsongkhapa. 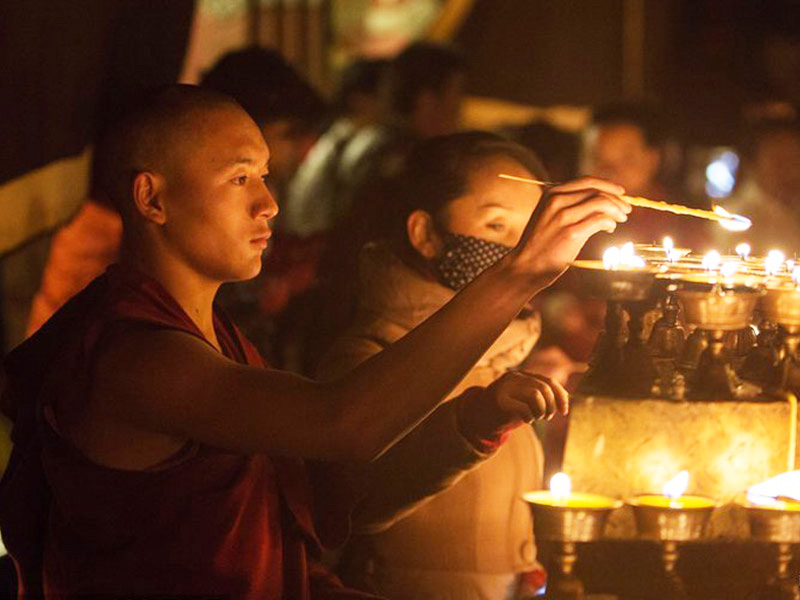 During the Tsongkhapa Butter Lamp Festival, local Tibetans will light the butter lamps in every Tibetan house and temples.

The festival is held in the Ganden Monastery in Lhasa, where Tsongkhapa died in 1419, the primary monastery of the Gelug School, and at the Jokhang Temple in Lhasa. The butter lamps are made a few days before the celebrations, and kept cold to stop them from melting. When the night falls, the lamps are brought out and placed on altars and rooftops and are lit around the monastery and across the city. In the square in front of the Jokhang temple, thousands of people gather to see the lamps lit, accompanied by the sound of the suona, while a bowl of holy water is placed inside the temple, to reflect the light of the lamps.

For the ideal tour itinerary for this trip, we have our excellent 5 Days Buddhist Festival Tour in Lhasa & Ganden Monastery, which covers the period of the Ganden Ngachen Chenmo Festival in December. A great time of year to visit Tibet, not only is it the time of one of the most beautiful festivals in the region, but it is in winter, which means cheaper hotels, discounted flights, and fewer tourists. The tour also gives you the opportunity to visit all of the stunning monasteries of Lhasa, as well as the Potala Palace and the famous Jokhang Temple.

What to Pack for Tibet Winter Travel

If you are planning a trip to Tibet for one of the winter festivals, then you will need to pack wisely, as it can be warm in the daytime and very cold at night. The temperature drops drastically at night, and while daytime temperatures can reach a good 10 degrees, at night it is often below freezing. Pack plenty of thin layers to stay warm, which can be added or removed depending on how cold you are.

The wind in Tibet can be strong and cold, and can easily dry and crack your lips and face, so it is essential to carry moisturizers and lip balm to prevent this. The sun is also strong, and you will need to have a good 30-factor sun cream to stop from getting sunburn, even in winter. For those dangerous UV B rays, you will need to have a decent hat to keep the sun off your head, as sunstroke is common on the plateau and can really spoil your vacation.

Dos and Don’ts in Tibet Festival 2021

Festivals in Tibet are religious-based affairs that have a very devout significance with the Tibetan people. If you are attending one of the festivals, you should check your behavior, and try not to do or say anything that the locals may find offensive. Your guide will be able to advise you on what is permitted during the different festivals, and will explain the reasons for each festival and the importance for Tibetans. However, overall, Tibetan festivals are about celebration, and are usually happy and festive events that are extremely enjoyable.

When meeting lamas or monks, it is not appropriate to shake hands or touch them. You should hold your two hands together in an upright position in front of your chest and lower your head as a sign of respect. You should also be careful about which topics you choose to talk about with monks and lamas, and subjects such as marriage or eating meat are not advisable.

During most religious ceremonies performed by monks and lamas, visitors should be as quiet as possible, and avoid making noise. You should also take care not to step over any braziers or holy objects, and statues or books inside the monasteries and temples are not to be touched. Always ask permission to enter a monastery, and once inside you should not smoke or be too loud, and photos are only permitted with permission from the lamas.

0 Comment ON "Festivals in Tibet Winter: when and where to celebrate Tibet festival 2021"