Tibetan people in Shigatse called Gtsang Tibetans who have a custom to celebrate New Year’s Day for four times each year: the New Year’s Day in the Gregorian calendar, Chinese Spring Festival, Tibetan New Year and Gtsang New Year or Farmers’ New Year. But they take the Gtsang New Year most importantly, and celebrate it most joyously, with Horse Racing, Archery Show and other activities. The Gtsang New Year is held generally at the beginning of the first month according to the Gregorian calendar. It’s the end of the whole year’s hard work, when crops have been harvested and farmers are sharing the happiest moment. Gtsang New Year in Tibetan calendar is deduced from the Buddhism calendar, it’s also an old festival based on the husbandry activities. Activities during the festival are closely related to the husbandry. Therefore, it is also called Farmers’ New Year. With lives of peasants becoming better off, people celebrate this festival more and more ceremoniously. 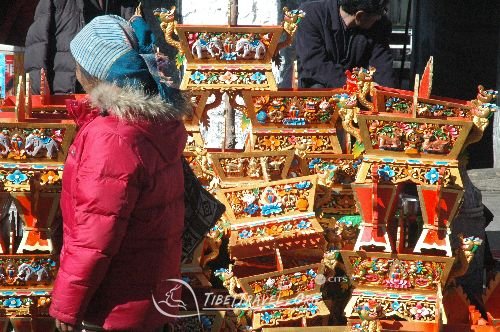 On the New Year Day, housewives can have a good rest in the day after a whole year’s hard work, meanwhile all the housework would be done by men and women would dress to the nines accepting their husband and children’s greeting, regards and services. All the housewives will receive presents, Hada, and highland barley wine from their families.
In the morning, a fiesta activity would be held in the hope of better harvest of crops and the safety of both man and livestock in the coming year. All the family members would take the firewood of coal and kind of cattle excrement firewood, climbing to the top of the house to hold the morning fiesta to pray in an undertone for the future harvest, safety and happiness. 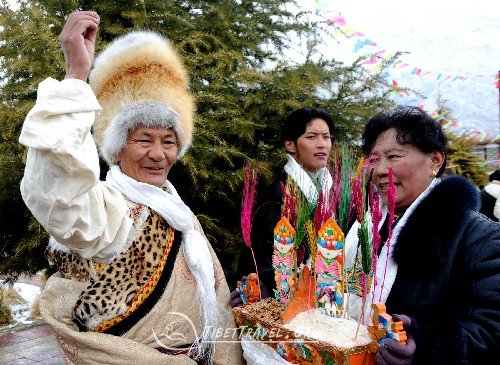 Later, people will clear up the threshing ground and spread some highland barley, wheat, peas, rapeseeds, and buckwheat on it. They stand on the top floor of the house and sincerely wait for the birds to eat the crops. If birds like eating a certain kind of crop, the crop is indicated to be a bumper crop. On the contrary, people would not have a good harvest for the crops birds seldom eat. If birds like to eat all kinds of crops, people will welcome a great harvesting year. They believe that birds are the holy spirits sent from the heaven, they can predict if people can reap the harvest or not. 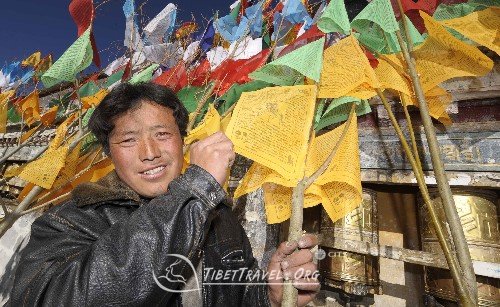 On the second day of the Gtsang New Year, people will fetch the slim willow branches and sew them on ribbons and prayer flags. Usually, one piece of player flag is different from another in colors, and different colors would have different signs according to the farmers. On the top of the branches, people sew on blue prayer flags which presents the blue sky; and lower, the white prayer flags standing for pure clouds are sew on; the third layer, red prayer flags means fire and the fourth, green means water. On the last layer, yellow prayer flags present the earth.