Is it possible to trek from Old Tingri to EBC in winter?

One of the best treks in the Tibet Autonomous Region, the trek from Old Tingri to Everest Base Camp (EBC) is a four-day trek that can be done throughout the whole year, with the exception of the period when Tibet is closed to international tourists in March. However, since this is the coldest and harshest time of year for the area around Mount Everest, it is not advisable to do the trek during these months anyway.

Trekking to the base camp from the town of Old Tingri can be done in the winter, as long as the heavier snow has not yet fallen and the route is passable. The weather at Mount Everest in the winter is a lot colder than in Lhasa, and there is a chance that it will snow more heavily, though this is usually not a problem until late January. Lying below the permanent snow line, EBC is not as cold or as bleak as many people think, though it can get down to around 4 degrees around the base camp area during the daytime.

How to plan the winter trek from Old Tingri to EBC in 2021?

The trek from Tingri to EBC is one of the best short treks in Tibet. Lasting just four days, the trek covers a distance of 70 kilometers from the town of Old Tingri, and takes you through some of the stunning landscapes that lie close to the mountain. Passing through beautiful valleys and past spectacular Himalayan glaciers that lie below the north face of the mountain, the views are amazing and there is a chance of seeing some of the wildlife that inhabits the region at the roof of the world. 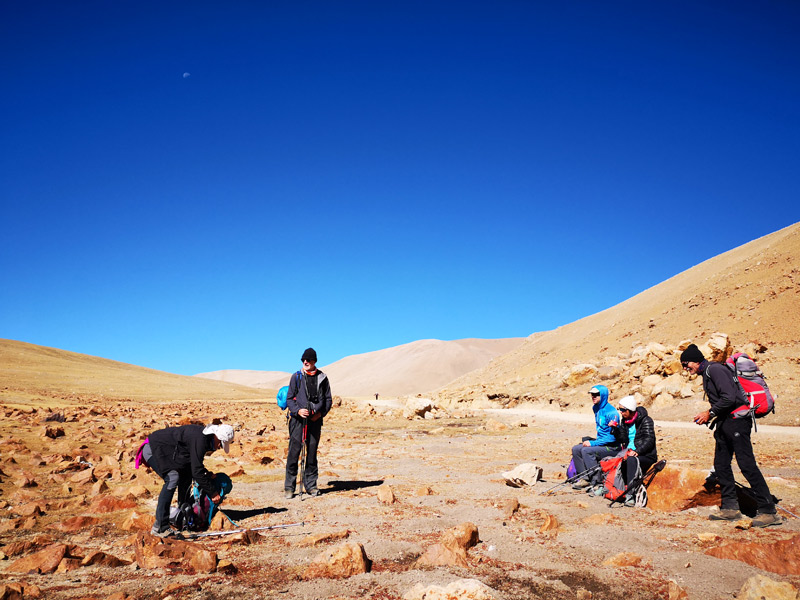 Our clients were having a rest during the trekking route from Old Tingri to Everest Base Camp.

The first day of the trek begins a few kilometers outside the town of Old Tingri, on the G318 Friendship Highway, and takes you south through the dramatic landscape to the Tingri Plain. The route of this day’s trek passes through the Ra-Chu Valley, with its vast meadows and stunning scenery. The meadows are popular pastureland for sheep and goats that are looked after by the nomadic herders of the plateau. The day’s trekking takes around five hours, and ends at Lungthang Village, at around 4,510 meters above sea level.

Along the route, you will pass through the small Che Village, where you can decide on which route to take to Zhaka. There are two paths to Zhaka, and the east path is the shorter, which takes you through the Ra-Chu Valley and up to one of the nomad camps to the high mountain pass at 5,170 meters. Over the other side of the pass, it is then downhill through the Chholong Village and past a small gompa to Lungthang Village, where you will camp for the night.

The second day of the trek is the most challenging of all four days, as most of the first part of the route is uphill. In high-altitude conditions, this can be very tiring, so regular breaks are needed to replenish your energy.

The trail uphill leads to the Lamna La Pass, which sits at an altitude of around 5,150 meters, and is a strenuous hike to the crest. However, the stunning view of the mountain vista from the crest of the pass makes the uphill trudge worthwhile. The campsite for the second night is a short distance below the pass, in the wide meadow valley.

The third day of trekking starts off easier than the previous day, crossing the wide valley with its network of small creeks that run through the soft grassy meadows in the valley floor. Crossing the valley, you may get the chance to see the beautiful Tibetan gazelle grazing on the high slopes of the valley below the pass and ridges, and plenty of yaks grazing on the lush green grass of the meadows, unless the snow has covered the valley floor already. The trail continues along the valley to the village of Zommug, where you will camp for the night.

The final day of the trek is the march to Rongbuk Monastery and finally to the base camp itself. The trek to Rongbuk is relatively flat, following the valley floor to the famous gompa below the world’s highest peak. Built in 1902, this highest monastery in the world has seen many of the old mountaineers pass through its gates on their way to the mountain, many of whom were blessed by the former abbot of the monastery.

Rongbuk Monastery was built on the site of several hermitage caves and huts that were previously used by the lamas of this part of Tibet, who would travel to the site to spend months in meditation and contemplation. The monastery is also a popular pilgrimage site for the Sherpas of the area around Mount Everest, who would travel across the mountains to pray and meditate at the monastery.

The final stretch of the trek is the run from Rongbuk to EBC, which is around eight kilometers and takes around two hours at most. It is a great way to enjoy the views of the world’s highest mountain as it gets ever closer, and culminates in the view from the base camp itself. The base camp is mostly empty in the winter months, as the tent guesthouses have all packed up and left for the winter. Thus Rongbuk Monastery is your stop for the night, in the winter months.

How about the road condition of winter EBC trekking trail?

The route from Old Tingri to EBC does not follow the route of the road to the base camp, and for most of the route, travels overland, across the meadows and plains of the plateau, and over the high passes between valleys. There is one small section of the route that is along a road, which leads to the base camp itself from Rongbuk Monastery. The trekking trail from Old Tingri to Everest Base Camp is very suitable for trekkers who want to challenge oneself.

The rest of the route is a mix of meadows and mountain passes, and while the route is suitable for beginners with a guide, it is hard enough to make you feel that you have really done some trekking through the arduous landscape around Mount Everest. Both of the passes that you will encounter along the route take you up to altitudes of over 5,100 meters, and are hard climbs that require a decent amount of physical fitness and stamina. Even then, you will need to take breaks on the long climbs upwards to the crests.

In the winter, some of the landscape may have a dusting of snow over it, which can make trekking a little more arduous and exhausting. Snow in the area normally comes only in January and February, so in December, unless there has been an early snowfall, the ground should be dry and clear of snow.

How about Tibet EBC accommodation in winter?

Winter in Tibet sees the tent guesthouses that usually sit at the base camp having been packed up for the colder winter weather, and there is nowhere to stay at the base camp from December to March. Camping at the base camp is also not advisable, as the temperatures in the winter months can drop to around – 10 to – 15 degrees at night, and the intense cold can be dangerous for campers at EBC. Rongbuk Monastery Guesthouse offers travelers a good place to stay overnight during their trekking to EBC.

What to pack for Old Tingri to EBC winter trekking tour 2021?

Anyone brave enough to make the trek to EBC from Old Tingri in the winter months should be aware that the weather is much colder than the winters in Lhasa and Shigatse, and the temperatures can get very cold, dropping to well below freezing at night. It is essential to make sure that you have the correct equipment and clothing to cope with the colder winter weather this far in the west of Tibet.

And you should also make sure that you have your passport, Tibet Travel Permit, Alien’s Travel Permit, and Frontier Pass in a pocket or small pouch that can be easily accessed, as there are a lot of checkpoints on the way to Everest Base Camp. Altitude sickness can also be a problem for some people traveling and trekking to the base camp, so it is advisable to carry some altitude sickness medications, if they are recommended by your doctor, as well as ibuprofen for headaches and something for nausea.