As the New Year starts, bringing with it a new beginning, there is no better time to head for the high-altitude Tibetan plateau if you want to experience the best of Tibet, without the crowds of tourists that the summer months always bring. While Tibet may be closed from the week before the Tibetan New Year until the beginning of April, there is still one month open for travel to Tibet, and this is one of the best months of the year to get a better Tibetan cultural experience and enjoy the beauty of the Tibetan winter, with its stunning snow scenery.

While many people believe that the Tibetan plateau is too cold to visit in winter, they could not be more wrong. Yes, there are areas of the plateau where the temperatures can drop dramatically, especially at night, and in the most remote and high-altitude regions of Tibet, those temperatures can reach as low as -20 degrees. However, those are the areas that are rarely visited by tourists, even in the summer months.

In the areas of Lhasa, Nyingchi, Shannan, and Shigatse, temperatures are not as cold as that, and the weather and climate are milder, though there is still a high chance of snow. Winter in Lhasa can be a great time to visit, and during the day, the sun is shining brightly and the temperatures can often be as high as around 8-10 degrees. Nighttime temperatures can get below freezing, to around -7 degrees, but are not so cold as to freeze you in your warm hotel bed. Capturing a stunning vista of the magnificent Himalayas in winter.

In Shigatse, the temperatures in winter are a little harsher than those of Lhasa, reaching around 5-6 degrees during the day, and dropping to as low as -13 degrees at night. However, the bright sunshine makes it feel warmer, and the pleasant weather and clear skies make it one of the best times to view the stunning vista of the mighty Himalayas.

Nyingchi, in the far southeast of Tibet, is one of the warmest areas of the plateau in the winter, with mild temperatures and a pleasant climate throughout the entire winter. Famous for its spring peach blossoms, the area is also a great place to winter in Tibet, as the milder weather and temperate climate are pleasant and comfortable. The winter months see very little rain, and in January the temperatures during the day can reach as high as 8-10 degrees, while at night, the drop is only as low as -2 to -5 degrees.

Tibet has a host of places that can be visited during the winter months, and there is even the possibility of traveling all the way to Mount Everest during the winter in Tibet. From the delights of the Sunshine City of Lhasa and the stunning semi-frozen Lake Yamdrok, one of the Great Three Holy Lakes of Tibet, to the Everest Base Camp (EBC) and the delightful Swiss Alps-like climate of Nyingchi, Tibet has something to offer everyone in the winter months. There are even plenty of local treks that can be done in the winter.

A tour of Lhasa takes you around some of the most stupendous sights in the world, from the stunning red and white of the Potala Palace to the sacred temple of Jokhang, the holiest man-made site in Tibet. Built in the 7th century, the Jokhang Temple houses the ancient and unique gilded statue of Sakyamuni Buddha that was brought to Tibet by the famous Tang Princess, Wencheng, on the occasion of her marriage to the Tibetan king, Songtsen Gampo. Not far from the Jokhang lies the Potala Palace, with its red and white buildings sitting high on the Red Hill overlooking the city like an ancient protector. Once the seat of the Dalai Lama and the center of government in Tibet, the palace is now a major tourist attraction in the city and dominates the Lhasa skyline, seen from miles away as you approach the Tibetan capital. Travelers can see the turquoise Yamdrok Lake lying in the arms of the surrounding snow-capped mountains in winter.

To the southwest of Lhasa, along the road to Gyantse and Shigatse, lies one of the Great Three Holy Lakes of Tibet, Lake Yamdrok. Known as “yar-‘drog. G’yu-mtsho” in Tibetan, this sacred lake is said to have been formed from nine separate lakes that were joined by a goddess that feared the lakes would dry up. Even today, it is a widely-held belief that, should Lake Yamdrok ever dry up, Tibet would become completely uninhabitable for the rest of time.

While there are many treks in Tibet that cannot be completed during the snowy winter months, there are still some great trekking trails to be found in the lower altitude areas around Lhasa that are well worth trying out for those that are interested in high-altitude trekking. There are two famous pilgrimage trekking paths close to Lhasa that make for an interesting half-day trek, at Drak Yerpa and Ganden Monasteries.

Drak Yerpa is one of the holiest sites in Tibetan Buddhism, and lies in the stunning Yerpa Valley around 30 kilometers to the northeast of Lhasa. The site has long been one of the main meditation and contemplation sites in the Lhasa area for centuries, and the monastery lies on the site of more than 80 meditation caves that have been popular hermitage sites since the first introduction of Buddhism to Tibet. However, the site is large and well spread out, so trekking from cave to cave and around the chapels is required. The trekking between caves is through some of the most beautiful hillside country in Lhasa, and provides great views of the Tibetan landscapes. 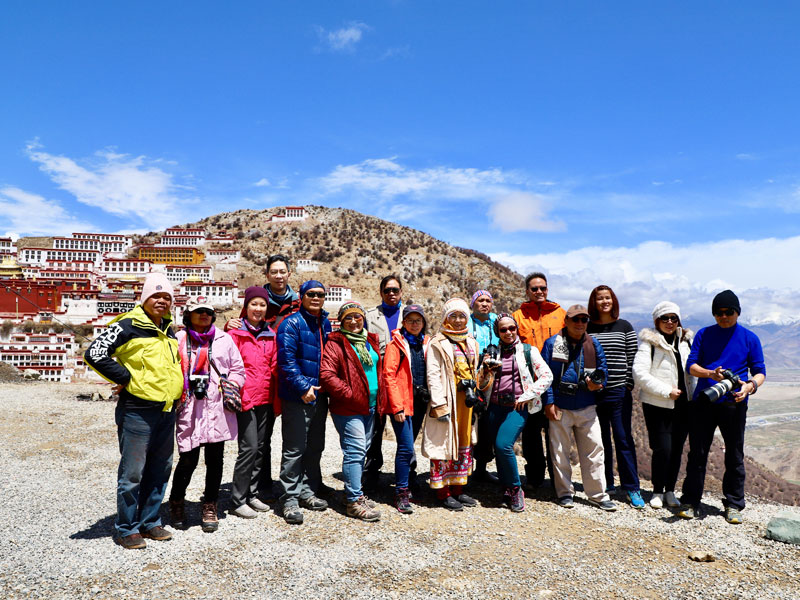 Tourists can spare a half-day to have a Ganden Monastery trek during the winter season.

Ganden Monastery, which was built in the 15th century by the Tibetan Buddhist master, Je Tsongkhapa, is one of the Great Three Monasteries of the Gelug School of Tibetan Buddhism, and the primary monastery of the school. One of the most popular places to perform the holy kora, or circle, around the holy sites of Tibet, the kora trek at Ganden takes you to some of the great sites of interest in the area, including the cracked rock that was made by the great Tsongkhapa using magic, as well as his own meditation cave on the site.

A trip to Mount Everest, in the far west of Tibet, is one of the iconic tours of the region, and thousands of people come from all across the globe to visit the base camp and gaze at the immense height of the world’s highest mountain. And in the winter months, this is still possible, even if the temperature at the peak is around -60 degrees in the depths of winter. 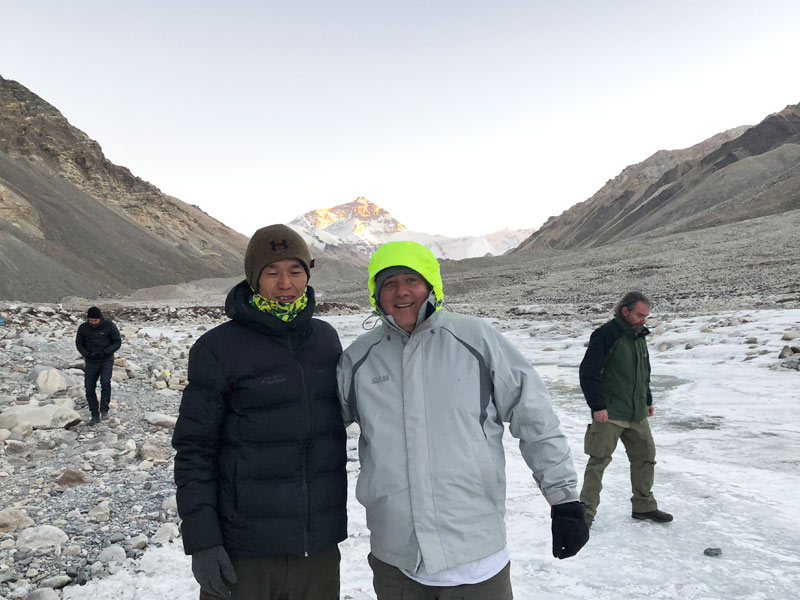 Tourists can get a panoramic view of the imposing Mt.Everest from Everest Base Camp.

Everest Base Camp in Tibet was the first of the two base camps to be built, and dates back almost 100 years to the first early expeditions that surveyed the mountain for climbing. Nowadays, while it is still used as a base camp for climbers in the two climbing windows each year, it has become one of the most popular tourist location in the world, and is still the best place from which to get a great view of the massive peak of the mountain.

Mount Everest is even more beautiful in the winter than it is in the summer, with a completely snow-covered landscape around it making the scene one of fairytale beauty. And not only do you get the best view of Mount Chomolungma, as it is known in Tibet, but you will also get to see some of the other highest mountains in the world, such as Mount Cho Oyu, Mount Shishapangma, and Mount Makalu.

Nyingchi is the easternmost prefecture of Tibet, and lies at a much lower elevation than the rest of the plateau, connecting with the Chinese provinces of Yunnan and Sichuan at its eastern edges. Famous for the peach blossoms that cover the area throughout March and April, the winter in Nyingchi is milder than anywhere else on the plateau, which makes it one of the best places to come for a winter tour. 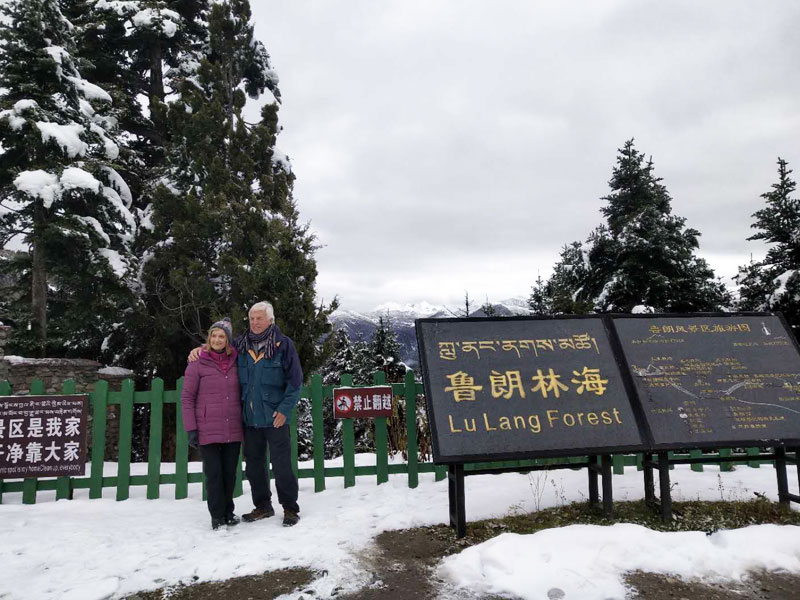 Paying a visit to Lulang Forest in winter would offer you once-in-a-lifetime travel experience.

An amazing place to visit, the area is home to the astounding giant cypress trees of the Great Cypress Nature Reserve. With giant trees that stand more than 50 meters tall and have stood for more than 3,000 years, this reserve is the most unique forest reserve in the world. Not far from it lies the Lulang Forest Area, an alpine meadow that contains stunning lakes, beautiful grassy meadows, and some of Tibet’s oldest primeval forests. Stroll through the forests of rhododendrons and azaleas, wander along the shores of the lakes, or just relax in the beauty of nature at its finest.

Known as the “Swiss Alps of Tibet”, the landscape is reminiscent of those famous European mountains, with a very temperate alpine climate that makes a visit to Nyingchi completely irresistible.

Can I visit Namtso Lake in winter Tibet 2022?

While it would be a nice opportunity to visit Lake Namtso in the winter months, with the beauty that it holds, covered in snow and ice and surrounded by stunning snow-clad peaks, the chance is not always possible due to the snow. A new road was constructed across the mountains, through the pass between the main Qinghai Tibet Highway and the eastern edge of the lake, which has made travel to the lake much easier. However, the snow can sometimes be too heavy and deep for even the toughest 4×4 to cross through. This means that there can be no guarantee that you will be able to get to the lake in the winter months of January and February.

If you are thinking of traveling to Tibet in the winter months, then there are a few tips to remember to make sure you stay warm and safe on the plateau. While the winter is not as bad as many people believe, there are some areas of the plateau where it can get intensely cold at night, and the cold is dangerous. Make sure that you take plenty of warm layers of clothing to stay warm, a raincoat to stay dry, and a good arctic-rated sleeping bag, as some of the outlying areas do not have heating in the lodges and guesthouses.

Winter in Tibet can be a time of sunburn and sunstroke, so it is essential to make sure that you are well protected at all times. The high altitude and thinner atmosphere make the rays of the sun much stronger than even the hottest tropical country. A wide-brimmed hat for keeping the sun off your head, sunglasses to prevent snow blindness, and sun cream to keep you from getting sunburn are essential items. You might also want to bring along some moisturizer and lip balm, as the winds in the far west can get very cold and chaffing.

0 Comment ON "2022 Tibet Winter Tour Destinations: what are the best places to see in winter Tibet?"