Tibet Snow: when it snows usually? how to plan a trip to enjoy snow in Tibet?

Winter in Tibet is the time for snow in the higher areas of the region. There is a unique and quaint charm to Tibet in the winter, with beautiful snow scenes and clear, bright skies. It is still possible to visit Tibet in the winter, and it is really not as cold as many people think. While it can get down to well below freezing at night, the days can be warm enough, with the bright sun in this thin atmosphere making the air feel warmer than the altitude would suggest.

Winter is the low season in Tibet and means that there are normally fewer tourists and travelers on the plateau, which gives rise to some decent discounts as well. So, if it is the snow scene that you are looking for, then coming to Tibet in winter is almost guaranteed to find you snow somewhere on this vast plateau.

While there may only be a light dusting of snow in Lhasa, or sometimes none at all, in the winter in western Tibet the snow is often heavy and covers the landscape in a stunning white blanket. The central and western areas of Tibet are the best for snow in Tibet, and the heavy snow can often cover the higher mountain passes, making them impossible to cross. 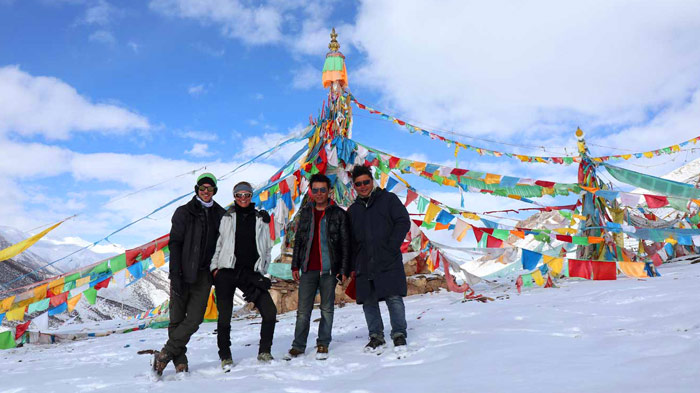 For many people, Tibet in winter conjures up an image of snowy white landscapes and tall, snow-capped mountains. The reality is that there are many parts of Tibet where there is little to no snow  throughout most of the winter months, with only the coldest months bringing snow to the lower altitude areas. However, for some parts of Tibet, the snows can start as early as November, and can last until the spring comes in April. But that does not mean that you cannot see snow in Tibet in other areas in November and December. Many snow mountains exist in Tibet, which have snow on the peaks and upper slopes all year round.

When Does It Usually Snow in Tibet? (Usually, November to April)

Winter is the time for snow anywhere in the world that has a temperate climate, and Tibet is no exception. For some areas of the region, the snows can start falling as early as November, and can last until April and the coming of spring.

Winter in Tibet is not all freezing cold and inhospitable, and there are areas that have warmer weather even in November and December. But for the snow scenes, it is best to travel to the higher altitude areas of Tibet such as Ngari and Nagqu, where there is more chance of seeing snow in the early part of winter.

And while there may be snowy landscapes in some areas of Tibet, that does not mean they are inaccessible. Even Mount Everest can be seen in the winter months, until a heavy snowfall makes it impossible to get over the high passes on the route to the famous mountain.

What Kind of Itineraries Can I Take to Be Able to Enjoy the Snow?

If you are planning a Tibet winter tour for the snowy landscapes, then there are certain places you can visit that will give you the best possible chance of seeing snow. Tibet may be called the “Land of Snows”, but it does not always snow on schedule, and there are times when there is no snow, despite it being cold enough or late enough in the year to expect it.

Everest Base Camp (EBC) in the winter is usually snow-clad, although it is normally still accessible throughout November and December, and sometimes even well into January. The snow scene at EBC is one of the most stunning of all photos you could take in Tibet, and is the classic scene of Everest, under a coating of pristine white snow. 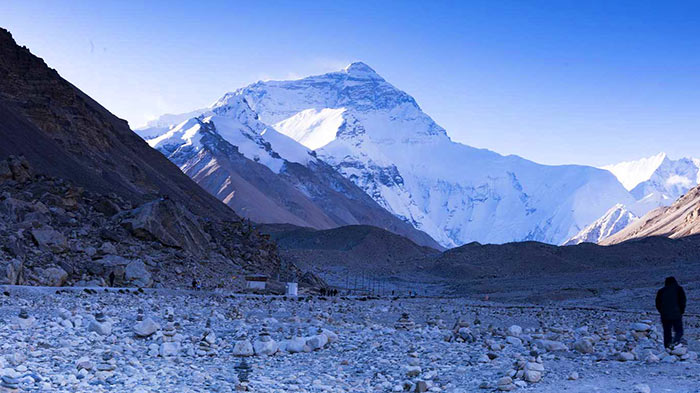 The main itinerary to visit Everest in the winter is the classic eight-day Tibet EBC tour, which includes two days in Lhasa. This tour is one of the best for those not used to high altitudes and gives you plenty of time to acclimatize to the increased elevation before moving to the extreme elevation of Mount Everest Base Camp.

After spending a couple of days in Lhasa acclimatizing and viewing the sights, you will get to head out onto the Friendship Highway towards EBC. The route takes in the cities of Gyantse and Shigatse along the way, visiting the Pelkor Chode Monastery, the Gyantse Kumbum, and the Tashilhunpo Monastery.

After Shigatse, it is off to Rongbuk Monastery, close to EBC, where you can stay for the night in the Rongbuk Monastery guesthouse and witness the sunset on the slopes of Mount Everest before heading to the base camp the following morning.

EBC lies at an altitude of around 5,200 meters, and the snow can fall there from around mid-November, and last until April. One of the most beautiful scenes in Tibet, you will be able to get some amazing photos of the snow-clad mountain at its best, weather permitting, of course.

>>View the guide to EBC tour in winter, including travel documents, dining and accommodation on the way to EBC

There are several trekking tours in Tibet, and these can take you to areas that have some snowy landscapes in the winter months. Trekking in Tibet is an amazing experience at any time of the year. In winter, with some snow on the ground, it makes it even better, as if you are trekking through some winter wonderland of fairytales. 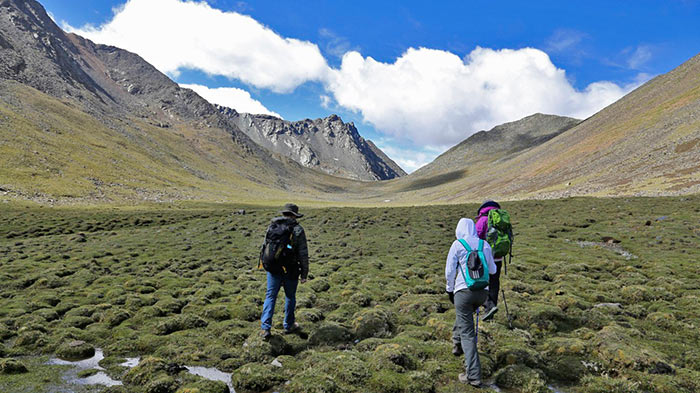 The trek from Ganden Monastery to Samye Monastery, which covers a distance of around 80 kilometers, is one of the most stunning treks in Tibet, following the ancient pilgrimage route to the cradle of the ancient Tibetan civilization.

Trekking to Mount Everest during the winter months of December and January is a good time to see snow. This 70-kilometer trek crosses some of the most stunning landscapes in Tibet, and three high passes that are highly likely to have snow in the winter months.

Mount Kailash, in Ngari Prefecture in the west of Tibet is renowned for having snow around it in the winter months. The trek around the Mount Kailash kora route can still be done in from mid-April to mid-Oct, though it's summer due to the high altitude, it can snow heavily around the mountain without notice. One of the best places to trek and see snow-covered landscapes, Mount Kailash is an unforgettable adventure.

In the early part of spring in Nyingchi Prefecture in the east of Tibet, there is a good chance of seeing snow on the ground, especially in the higher areas of the prefecture on the slopes of the mountains. March to April is the time of the Nyingchi Peach Blossom Festival, and if you can get there early enough, you can get to see the peach blossoms bursting forth from beneath snow-clad branches. Although the area is one of the lowest in Tibet in terms of altitude, the winter produces a fair amount of snow, except in the very lowest of valleys.

Snow Mountains, to Be Able to See the Snow All Year Round

Snow Mountains are a feature of the Tibetan Plateau and can be seen in many areas of Tibet as well as the areas of Yunnan and Sichuan that lie on the Tibetan Plateau. A Snow Mountain is one of the high mountains that has snow on it all year round, instead of just a clear summit. These mountains are often places of holy worship, and are sacred in Buddhism, believed to be the abodes of the gods. 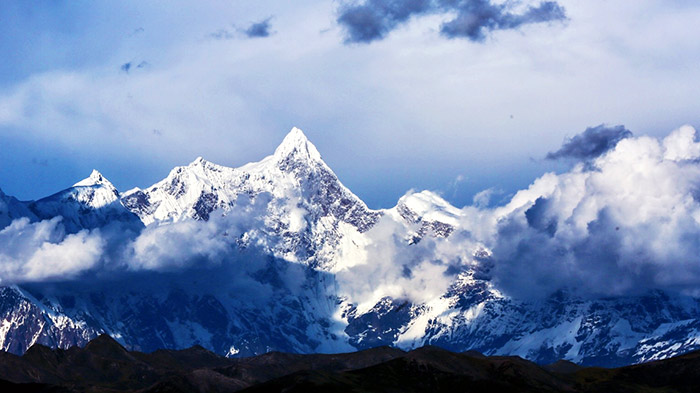 Some of the most famous snow mountains in Tibet, which includes Mount Everest, also include Mount Kailash, which has a covering of snow on its peak throughout the year. Namcha Barwa peak, in the isolated part of southeastern Tibet, is another Snow Mountain that is worth visiting for the view of its white-clad slopes. Lying on the Great Bend of the Yarlung Zangbo River, it is the highest mountain in its own sub-range, and the world’s easternmost peak that stands over 7,000 meters.

Mila Mountain, in Gongbo'gyamda County of Lhasa, is one of the closest Snow Mountains to the Tibetan regional capital and lies around 150 kilometers to the northeast of Lhasa. Lying right on the border between Lhasa and Nyingchi, Mila Mountain stands just 5,200 meters above sea level, but has a crest of snow throughout the year. The nearby Mila Mountain Pass, the highest pass on the route of the Nyingchi to Lhasa section of the G318 National Highway (Sichuan Tibet Highway), is a popular tourist attraction with its three carved stone sculptures of yaks that sit beside the road at the crest of the pass.

0 Comment ON "Tibet Snow: when it snows usually? how to plan a trip to enjoy snow in Tibet?"