The Ultimate Travel Guide about Planning a Lhasa Tour in 2021

Lhasa, the capital city of Tibet, with a history of over 1,300 years, is the political, economic, and cultural center of Tibet, and also the highest city in the world at an altitude of 3600m.

Lying in the center of the Tibetan plateau, Lhasa is surrounded by towering holly mountains, crystal clear holly rivers, and devout religious disciples. Its rich religious myth, long history, and unique ethnic cultures and customs attract tens of thousands of tourists coming for a visit every year. Many guests travel to Lhasa from places thousands of miles away from China just to catch a glimpse of this holy and mysterious city.

In 2021 as an expert in Tibet tourism, we will offer you an ultimate guide about planning a trip to Lhasa to experience its unique beauty shaped by over 1,000 years of Tibetan Buddhism. 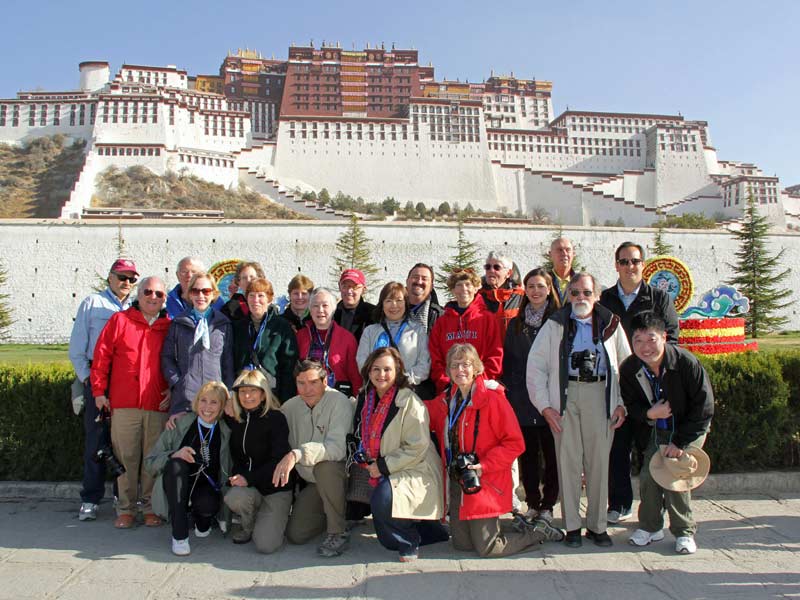 What scenic spots you could sightsee in Lhasa

There are many cultural heritage sites and scenic spots strewn within the bounder of Lhasa city and around it.

As the landmark of Tibetan tourism, Potala Palace was once the former winter residence of Dalai Lama. It is a magnificent building combining functions of palace, castle and monastery together, and also the largest and most intact ancient architectural complex in Tibet. The palace is a fine representative and crystallization of ancient buildings of Tibetan style and of Chinese nation. 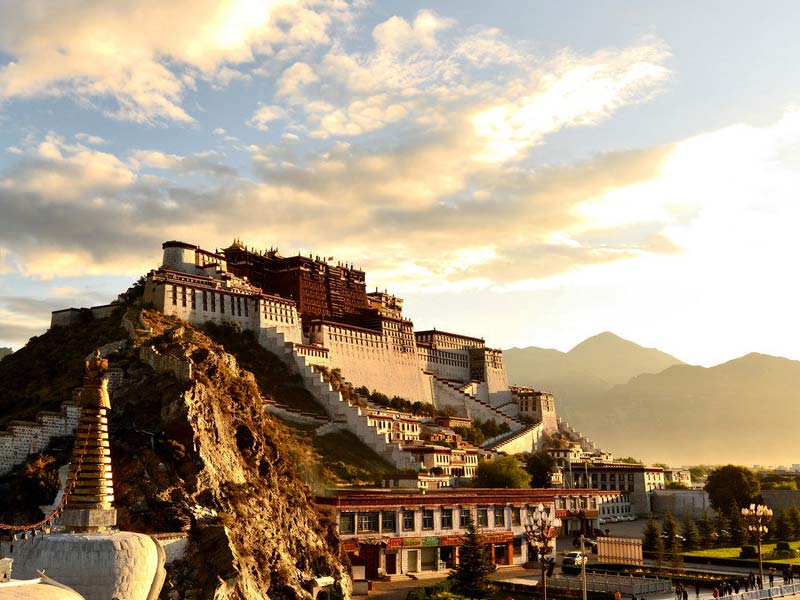 The magnificent view of Potala Palace at dusk

As a foreign tourist you could have a big feast about Tibetan architectural style affected by Tibetan Buddhism and see the old palace of Dalai Larma.

Jokhang temple is built 1300 years ago by Tibetan king Songtsen Gampo, the founder of Tibetan empire who introduced Buddhism to Tibet. It was expanded and renovated in Yuan, Ming and Qing Dynasties and then became what is today’s scale. The temple enjoys unmatched position in Tibetan Buddhism and was the works of Tibetan regime in ancient China at the height of its power. The front image of Jokhang monastery under clear sky

In Jokhang temple, you could have an inner kora around the main shrine of Shakyamuni Buddha alone or with your friends and feel the way how Tibetans perform their kora.

Barkhor Street is located at the old city proper of Lhasa. As a most prosperous business pedestrian street built around the Jokhang monastery, it combines business, pilgrim circuit and traditional life style and residence together. It is a most-renowned pilgrim circuit route and is called “holly route” by Tibetans. 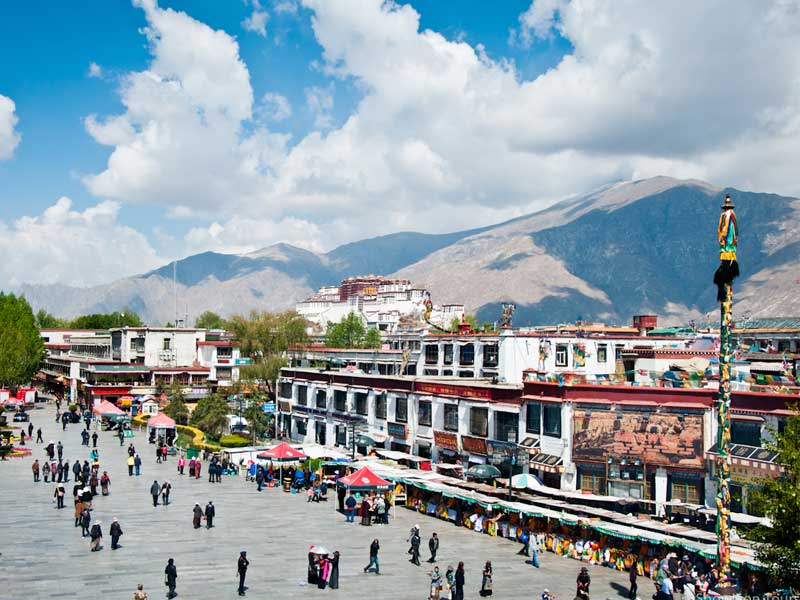 Having a bird view of bustling Barkhor street

Here in the street, you could buy souvenirs you like and watch pious pilgrims taking on their pilgrimage journey. You will feel the buzz and glamour of the busiest street in Lhasa.

Sera Monastery is one of three big monasteries in Lhasa established by Gelug Sect of Tibetan Buddhism, the other two being Drepung Monastery and the Ganden Monastery. The temple is located at the foot of the Serawoze Mountain three kilometers north of Lhasa. It is surrounded by rich willow forests and is a traditional site for Buddhist scripture preaching since ancient times. 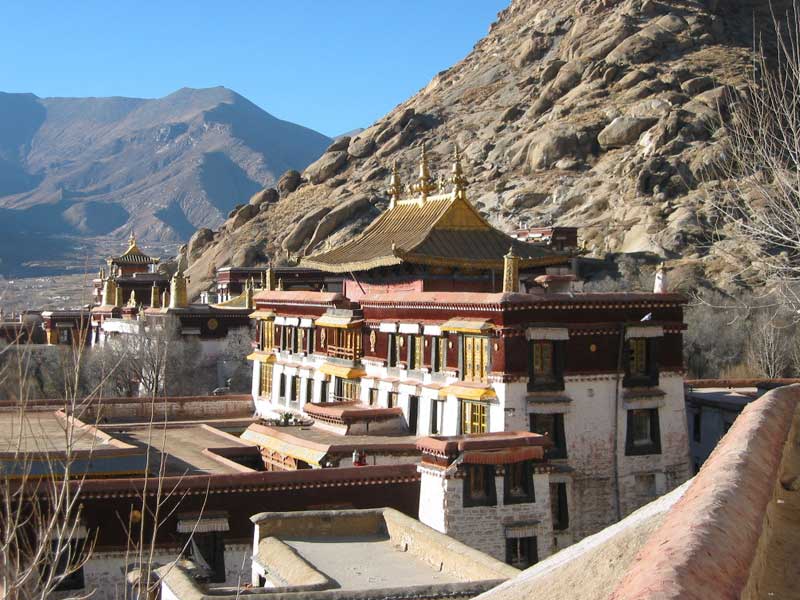 As a tourist, you could sit in the temple and listen to the debate on Buddhist scripture that makes the temple so famous.

Drepung Monastery is located at the pass of Genpeiwuzi Mountain about ten kilometers north of Lhasa city. It was the largest temple in Tibetan Buddhism before the liberation of Tibet, and now enjoys the highest position among all the Gelukpa monasteries in autonomous region.

Together with Sera Monastery and Ganden Monastery, they are known as the “Three Largest Monasteries of Lhasa”. Here in the temple you could watch rare artistic works of Buddhist sculptures, decorations, animal and Buddha statues. You could also experience the forlorn wilderness surrounding the temple without any sign of vegetation but barren stone mountains.

Ganden Monastery is the most special temple of the six largest monasteries built by Gelug school of Tibetan Buddhism. Built by the founder of the Gelug sect of Tibetan Buddhism Tsongkhapa, Ganden could be seen as the ancestral temple of the Gelug School. There are many rare cultural relics and antiques in the temple; many of them are rewards bestowed by the emperors of the Ming and Qing Dynasties, which show the long history and the highest religious position of the temple. 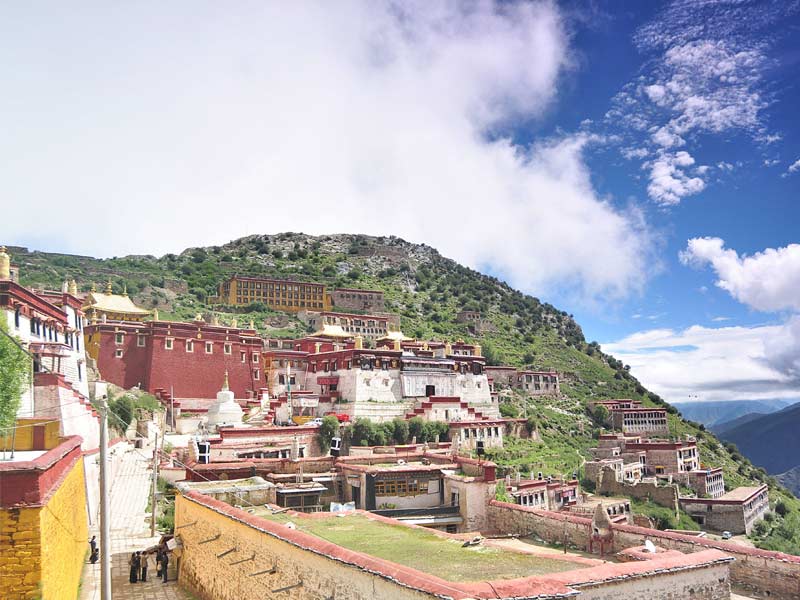 Here in the temple you could appreciate the delicate frescos and stone sculptures of the temple and cultural relics stored in it.

The aforementioned tourist sites are some typical cultural relics in and around Lhasa city. There are many other sights waiting for your discovery such as, Chakpori Hill at the right of Potala Palace, Ramoche Temple and Norbulingka, the former Summer Palace of the Dalai Lamas.

Some travel tips about the tour in Lhasa

The best time to visit Lhasa would be from March to October, at this period you could avoid rainy seasons.
Lhasa city is also known as “the city of sunshine” with mild winter and cool summer. The rainfall here is scarce and for most time of a year it is sunny day with clear sky.

We suggest your tour at Lhasa about 3 to 4 days

How to Get to Lhasa

There are three ways to come and away Lhasa. It is by train, by air or by bus.

After the Qinghai-Tibet railway was put into operation, lots of tourists choose train as their way to Lhasa for being attracted by the pretty landscape along the railway.

Flight is the easiest way to Lhasa Gonggar airport, which is 97 kilometers away from Lhasa city, you could refer to this website for flights to Lhasa.

Travelling within Lhasa, you could take bus to your destinations.

The representative place for pilgrim circuit in Lhasa is Barkhor Street, around the Jokhang Temple. This pilgrim circuit is followed clockwise around Jokhang temple. It is also a collection of lively market and Tibetan-style commodity exchange.

What to Eat in Lhasa

You could find all kinds of food in Lhasa including Tibetan cuisine, Sichuan cuisine, Nepalese and western-style food
Some well-known restaurants including Snowland Restaurant, Crazy Yak Saloon, Snow Deity Palace, are available here. For more details, please refer to what to eat in Lhasa.

Many tourists to Lhasa would buy some souvenirs as gifts for their family members or friends. In Barkhor Street, you could buy some typical souvenirs such as Tibetan rugs or carpets, Tibetan incense, aweto, silver ornaments and Tangkar. For details, please go to shopping in Lhasa for more information.

When you arrive at Lhasa, have a good rest immediately. Don’t do any strenuous activity and eat too much on the first day.
Avoid frequent showers or bathes for fear of catching a severe cold. To adapt to the high altitude do not rely on oxygen equipment all the time if you are not serious in short of breath.
You could take some medicine to alleviate altitude sickness such as American ginseng, Inosine Tablets or oral liquid, nuodikang capsules, Gaoyuanan capsule and Rhodiolae capsule.

For headache, you could take Bufferin drops and other daily drugs for family use to ease the pain. Some other health medicine and products such as glucose and buttered tea could also ease the illness.
You could refer to our website for more information on alleviating altitude sickness

It’s convenient to draw cashes with credit cards and exchange currency in Lhasa, for there are many branches of Bank of China, China Construction Bank and Agricultural Bank of China in Lhasa.
There are also many ATM with internet connection. The office hour of banks in Lhasa is from 9:00 to 12:00 am and 15:00 to 18:00 pm.

Laundry shops can be found on the streets in Lhasa, such as Jiejing Laundry on Jinzhu Xilu. Besides, many hotels in Lhasa provide laundry service/dry cleaning service, too, for example, Jardin Secret Hotel, Tibet Hotel and Century Grand Hotel. For more laundry information in hotels, please refer to Hotels in Lhasa.

Tibet is very safe with sound public order, and this is especially true in Lhasa. You could even loiter around streets at night, and there is no need to worry about anything for at every junction of the streets stood several heavily-armored soldiers garrisoning the streets 24 hours a day. However you should beware of pickpockets, a problem in Lhasa. In some busy street, keep your bags and purses close to your sides, and wear your wallets in your front pocket but not rear pockets.

How to Plan a Tibet Everest Base Camp Tour in 2021