Sakya Monastery, in Tibet Autonomous Region, is the principal monastery of the Sakyapa sect of Tibetan Buddhism, and is located in Sakya County, in Shigatse Prefecture, south-west Tibet. Around 160km southwest of Shigatse, the monastery lies on the hillside on the road to Tingri. 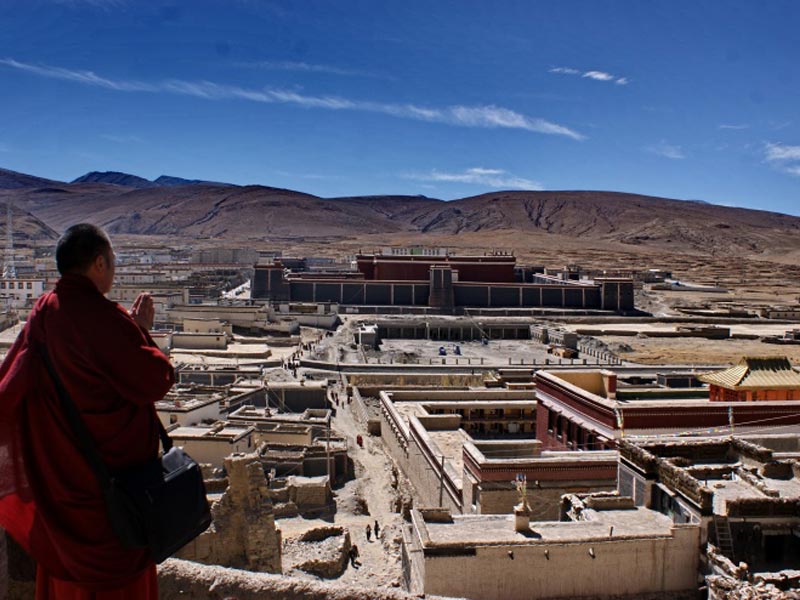 Sakya Monastery is the principal monastery of the Sakyapa sect of Tibetan Buddhism.

Several decades before the rise of the monastery at Sakya, a revered Indian teacher, Atisha, passed through the region, and rested at the site where the northern monastery now stands. On that site he had a vision where he saw that great emanations of Avolokiteshvara, Mahakala, Manjushri, and Vajrapani would be born there, and would perform great acts for the good of the Dharma and other beings. After the vision he ordered his attendants to build a small, temporary shrine, and prayed with offerings to the Great Masters of the holy acts that were to come. The buddha in Sakya Monastery.

The northern part of the monastery was founded as the seat of the Sakya sect in 1073 by KhonKhonchongGyalpo, a Nyingmapa monk from the rich and powerful Tsang family. When traveling through the region, he came across the small shrine, and requested permission from the local inhabitants to build a monastery on the site of the shrine. Set on the hill on the north side of the Zhongquriver, the monastery was created on a grand scale, with many different buildings, sacred statues and scriptures. It later included a stupa that contained the holy relics of KhonKhonchongGyalpo. There are many different buildings and sacred statues in Sakya Monastery.

The second site of the monastery was on the southern side of the Zhongquriver, and building started in 1268, led by BenqenSagyaSangbo. The commission for the southern monastery was made by the fifth founder of the Sakya sect, ChoygalPhakpa, who ordered that the walls be painted red, white, and gray, in honor of the three Buddhist Tulkas. Over the centuries, the southern monastery has grown to include many hundreds of buildings, shrines, temples and monastic residences. The monastery contains many Thangka paintings, some of which date back to around 1270 AD. The most historical Thangka is the one that depicts the meeting between Phapka and the famed Mongol leader of China, Kublai Khan, who had heard the teachings of the Sakya sect. He invited Phapka and SakyaPandita, the fourth of the five founders, to teach Buddhist philosophy in his court, through which Vajrayana Buddhism began in China. Sakya monastery is often known as the “second Dunhuang”, for its huge collection of over 40,000 books. The SakyaKloster is the home of thousands of volumes of sacred Buddhist scripts, and just one single, long bookshelf holds around 10,000 ancient scriptures. The bookshelves cover both sides of the hall, as well as the back wall, and reach from floor to ceiling. The shelves down each side are 57 meters long, 11 meters high, and one meter deep. The scriptures vary in type, from scrolls to folders, and even books bound with boards. It is also the home of the world’s largest scripture, the unique BurdeGyaimalung, which is 6 feet long, 4 feet wide, and 2 feet thick. The sacred scripture is a record of Tibetan religion, culture, history, philosophy, literature, and agriculture, and weighs over 500kg. The SakyaKloster is the home of thousands of volumes of sacred Buddhist scripts.

There are also 21 volumes of sacred scriptures that were written on Patra leaves. Each volume is between 100 and 200 pages long, and is decorated with delicate and detailed colored drawings. The volumes are estimated to be the most valuable sutra in the world. And in 2003, during restoration work, over 84,000 scrolls were discovered sealed behind a wall. They were inspected by the Tibetan Academy of Social Sciences, who speculate that the scrolls had been walled up for hundreds of years. 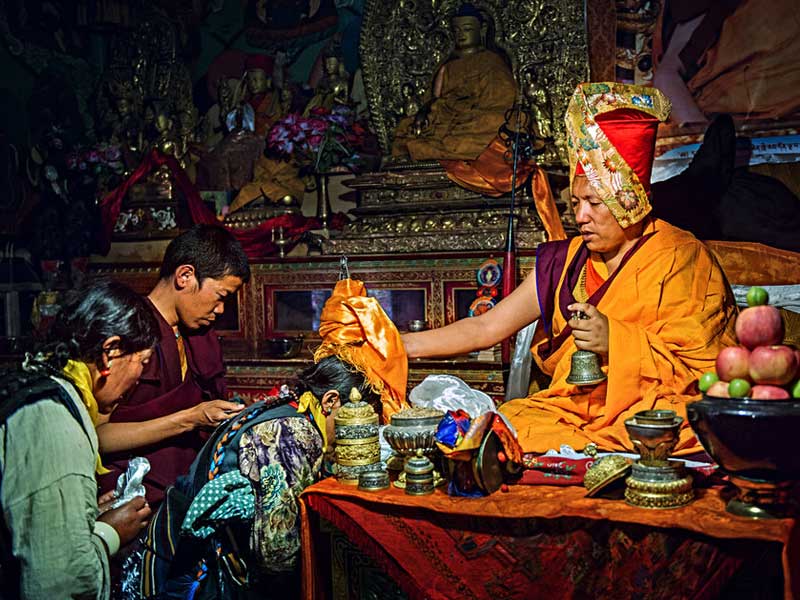 A place of scholarship and teaching, the monastery has long been a focal point for the teaching of the ten scientific disciplines, which were introduced from India to Tibet through this monastery. The monastery is also filled with sacred Thangkas, which depict scenes from nature and history, as well as the classic representations of Buddha and the other deities. The collection of Thangkas and mandalas in the monastery are unequaled throughout the world. Sakya Monastery is a place of scholarship and teaching.

The main chanting hall, the LakhangChenmo, is the main hall of the monastery, and visitors come from all around the world to hear the haunting sound of the chanting monks. The hall covers around 5,800 square meters, and can hold up to 10,000 monks.

One of the main highlights of the year at Sakya is the Cham Dancing Festival, where holy lamas don intricate, colorful masks and perform a holy dance. The cham dance is a form of meditation and offering to the gods. Accompanied by music from traditional Tibetan instruments played by monks, the dances are about compassion to other beings and bring merit to those who see them. The dance is held in January, and is a major event in the Buddhist festival calendar. It is often held over 2-3 days, and includes the unfurling of a great Thangka outside the main hall. Sakya monastery is open all year round, except from mid-February to March when travel to Tibet is forbidden. Set in the far southwest of the region, it is hard to get to in winter, since travelling into Shigatse Prefecture is often snowbound through the winter months. 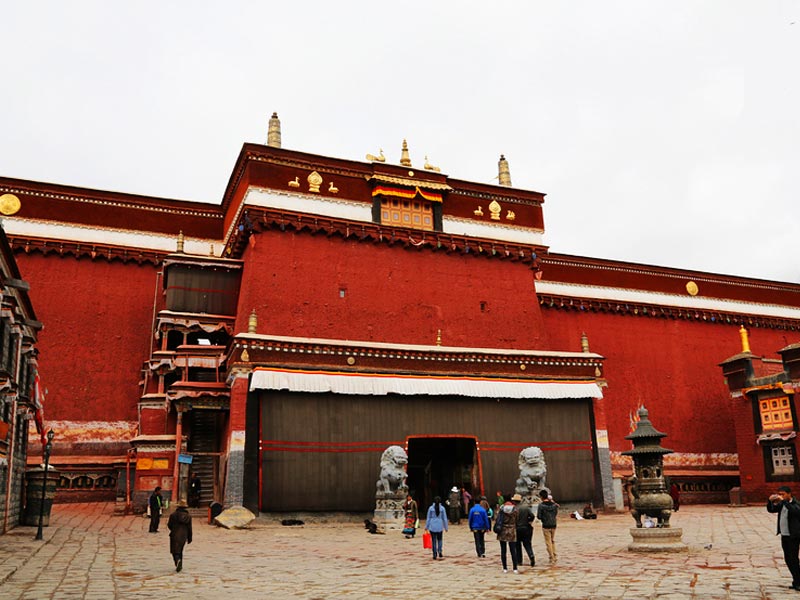 Spring and fall are great times to visit any part of Tibet, and Sakya is no exception, as the weather is mild and clear, with little to no clouds. However, as the monastery is set in a beautiful valley, in summer when the monsoon rains come, the land around turns lush and green with the growth of fresh new grass and new leaves. The rains breathe new life into the land, and the dry, dusty landscape blooms with life and color.

How to Get to Sakya Monastery

The monastery can be reached from Shigatse, Tibet’s second largest city, with a 4-5 hour drive. Renting a car and traveling there on your own is not permitted, so the best way to see the monastery is to join a tour with Tibet Vista, who offer several tours that visit the area, and include a visit to Sakya. Tours start from Lhasa, and will include many other fabulous sights both going to and coming back from Shigatse Prefecture, including Mt. Everest and holy Mt. Kailash.

Accommodation and Hotels in Sakya County

One thing you will not have to worry about is where to stay in Sakya. Although the town is quite remote, with only one famous attraction, it is a great place to stay. There are a few hotels that are available for tourists, and have good quality accommodation, considering you are a very long way from Lhasa.

The most modern hotels in Sakya is the Sakya Mansarovar Hotel, which has comfortable, modern rooms, with hot water, air conditioning, and its own restaurant. However, there may be times when running water is not available. And the shortage of some foods is still felt here, so the menu may be limited. The SakyaLowa Family Hotel is a family run hotel, with a friendly atmosphere and good, clean rooms. Although the toilets are only the pit-type, and there are no showers, the novelty of staying in this hotel is to live as the locals do. The pump in the courtyard can be used to shower, weather permitting, but there is plenty of hot water to just wash if you are not feeling that adventurous.

Sakya monastery, and the local area, is one that is steeped in history and mysticism. Over 1,000 years old, the monastery is a testament to Buddhism, and a lasting reminder that Tibetan religion is still as strong as it was back when the monastery site was first enshrined by Atisha.

0 Comment ON "Sakya Monastery, A Treasure House of Tibetan Buddhism"