Cham dance is a famous monastic dance performed in monasteries of Tibet. When tourists travel to Tibet, they should not miss the interesting Cham dance in Tibet. In 2017, tourists can contact us to make a Tibet tour in June to enjoy Cham Dance Festival at Samye and Trandruk monasteries.

As a Tibetan Buddhist ritual dance, the Cham dance is usually performed by monks for lay people. There is great variety among Cham dances according to the sect of the hosting monastery, the religious occasion, the region of performance and the traditions of the particular monastery. The main attraction of the Cham dance to the foreign eye is the multitude and divergence of the colorful masks.

Masks are the embodiment of the Wrathful Deity. While they drive terror and great fear into the hearts of the forces of evil, the masks also provide tranquility and calm to the Buddhist practitioner who is seeking enlightenment through meditation and prayer.  Masks that have survived for a long time are considered special and very powerful.  They become venerated in their own right; the faithful make pilgrimages to worship in front of them, particularly on special days or during religious festivals. One such item is the famous stone mask of Palden Lhamo located in the Jokhang in Lhasa.

Cham dance masks are generally about two or three times the size of a normal human head. Because of weight, center of gravity, sharp-edge issues, and to prevent chafing and cuts, the dancers wear padded caps or folded towels covering the forehead, sides of the face, and even the neck. The favorite head covering is the toque. 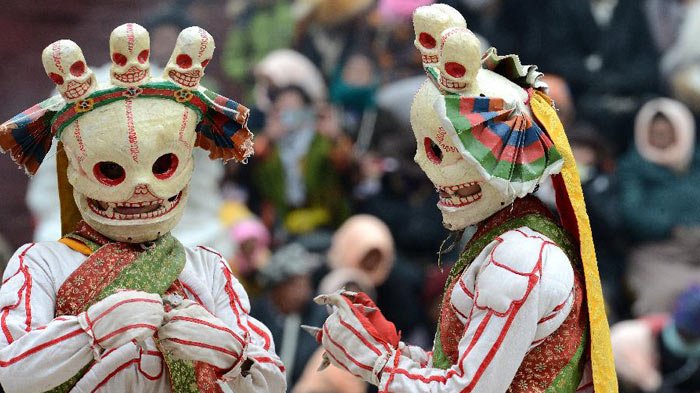 Besides the masks, Cham dancers will also often wear brightly colored robes and sometimes aprons and other ornamentation traditionally made of bone.

Old costumes are a rarity; almost all were confiscated and destroyed during the Cultural Revolution. Those that were hidden were severely degraded by insects and rodents and were virtually without use. Luckily, brocades and silks along with a wider selection of more modern haberdashery were now available and soon more colorful and flowing dance costumes started to appear. Previous decorations made of human or animal bone could now be fashioned from a wide variety of plastics - easier to acquire, easier to work with, and much less contentious to the outside world.

Costumes are worn over the usual dress of the monk. The normal dance costume consists of a gown with long broad sleeves over which can be worn a short triangular cape, sometimes called a tippet. This poncho-like mantle may be embroidered or decorated; its color may also import further iconographic information. Sometimes the dancer wears a breast ornament or a circular breastplate also known as a mirror.

There are several stages to a Cham performance and in its full form, it lasts for several days. It is quite a social gathering for the people who attend.