One of the many unique arts of the Tibetan people is the Tsha Tsha, handcrafted figurines made of clay, and painted in vibrant colors. Tsha Tsha is made exclusively in Tibet, and is a small piece of Buddhist artwork that was introduced into Tibet from ancient India. The Tsha Tsha is used to express a devout belief in the teachings of the Buddha, and when praying for good fortune. The Tsha Tsha is now widely spread across Tibet, and found in many homes and often on the person of pilgrims as you travel to holy sites around the region. 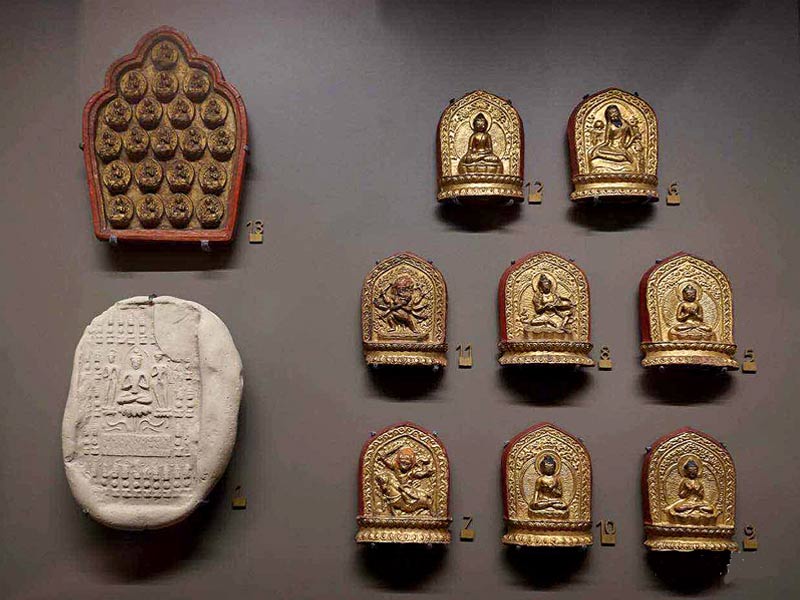 Tsha Tshas are handcrafted figurines made of clay and painted in vibrant colors.

Tsha Tsha can be found in temples and monasteries all over Tibet, and the differences are mainly due to sculptural characteristics of the different periods of Tibetan Buddhism, and the various sects. The Tsha Tsha can be flat, with the mould only on one face, or round like stupa, with two flat sides containing the moulds. They can also come in a variety of designs, including round, square, and triangular being the main outline designs. Tsha Tsha comes in a variety of designs, including round, square, and triangular.

History of Tsha Tsha in Tibet

With the introduction of Buddhist culture into Tibet in the 7th century AD, came the Indian art of sculptures of the Buddha. The artwork, now known as Tsha Tsha – which is a phonetic transliteration of the Sanskrit – these pieces were useful in breaking through the language barriers and literal obstacles the Buddhist monks faced. They helped Buddhism to both adapt itself and expand into Tibetan-inhabited areas. As a result, they played a very important role in the spread of Buddhist doctrines. They not only promoted the development of religious art there, but also enriched expressive means and forms of Buddhism. 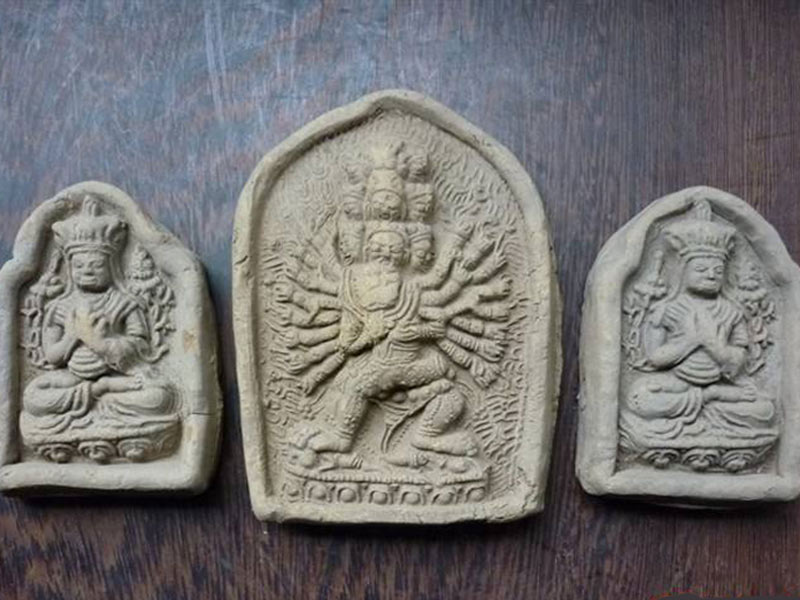 In the view of Tibetans, Tsha Tsha is a kind of mini-sculpture with well-designed figures full of decorative and symbolic meanings. The Indian origins of Tsha Tsha can be proven by ancient historical Tibetan documents and the styles of a few early-discovered Tsha Tsha. In Tibet today, the making and printing of Tsha Tsha still goes on. Meanwhile, combined with aesthetic needs of all Tibetan-inhabited areas, they have developed into rich and colorful forms. Nowadays, in addition to exquisite and vivid production techniques, the appearances of Tsha Tsha have greatly changed. Early Tsha Tsha were less beautiful in appearance. Due to their combination with the inherent aesthetic culture of Tibetan-inhabited areas, they vary in shape, and are abundant in symbolic meaning. Familiar shapes include round, trigon, vault, square, petal, and pagoda as well as one-layered and multi-layered forms. From them, the natural combination and remarkable development of two cultures is evident. 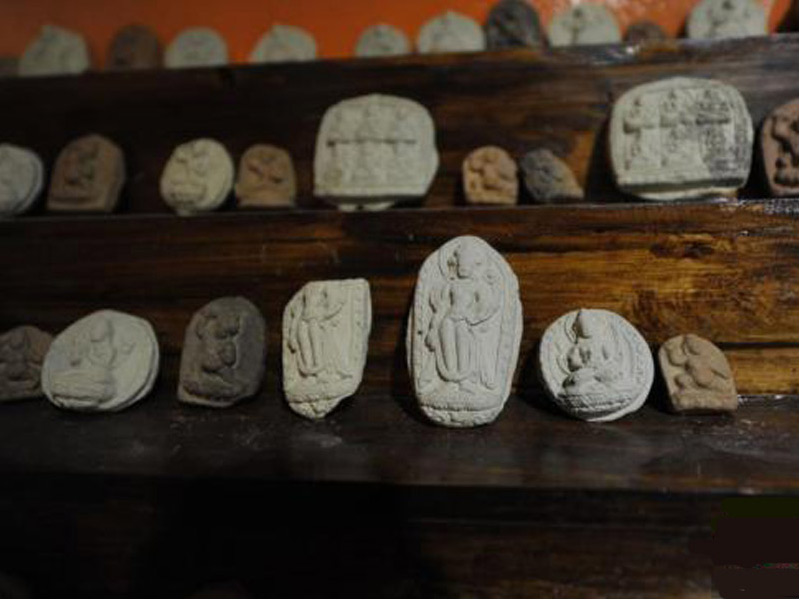 Tsha Tsha is a kind of mini-sculpture with well-designed figures.

How to Make Tsha Tsha

The most common raw material used for making Tsha Tsha is clay, which is pressed onto a metal of stone mold, which contains the image that the maker is using. The molds are made from either hammered or cast metal, or carved stone and the images are concave, so that the resulting Tsha Tsha is a bass-relief image. Once it is dried, the shape is cut out of the lump of clay, and the final piece is often painted in a variety of colors, usually using natural minerals as coloring. Tsha Tsha’s final piece is ofen painted in a variety of colors.

Some Tsha Tsha is baked once the paint is dried, making them pottery versions of their clay cousins. These are often the bigger Tsha Tsha, which are used in temples and homes for aid in meditation. Smaller Tsha Tsha are more often carried as personal tokens. 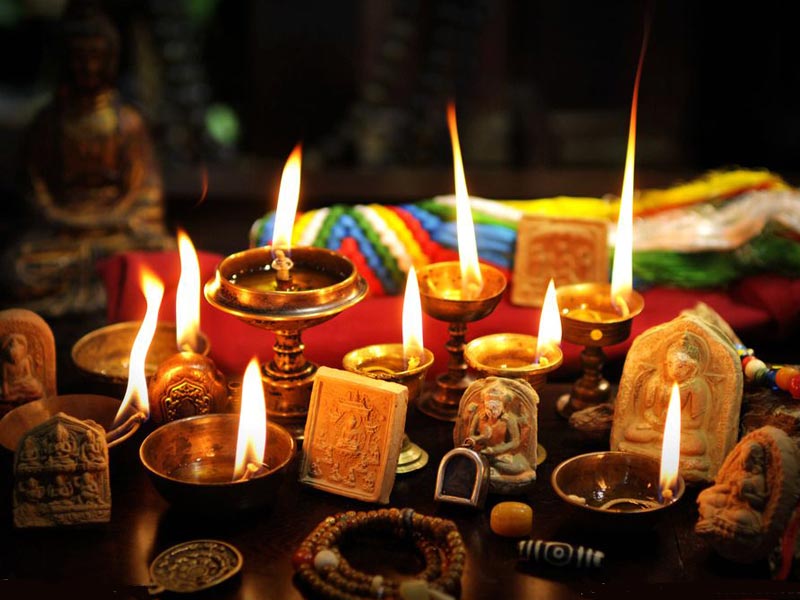 There are many Tsha Tsha in temples for aid in meditation.

The most precious of all Tsha Tsha are those that are made from clay mixed with the ash or ground bones of one of the previous Living Buddhas. These are used as amulets among the monks and lamas, and are believed to keep away wickedness and the temptations of the body.

Different Classifications of Tibetan Tsha Tsha and Their Usage

Tsha Tsha molds can be classified into single-mold (i.e. flat mold) and double-mold (i.e. double-leaf mold). Most are inlaid relief and line-carved artworks, along with parts of pagoda-shaped and round-carved mini ones that are printed by a flat mold. While all the Tsha Tsha made by double-mold are three-dimensional and round, such as the statues of Sakyamuni, Padmasambhava, and Tsongkapa. They are large and have relatively complex shapes. Moreover, only by joining two molds, can a complete, three-dimensional body be printed. Of course, there is another kind of Tsha Tsha that are used as amulets, and whose shape is flat and double faced, and are carved with clear designs. Only by putting two Tsha Tsha with different designs together does it form a set, and this kind of Tsha Tsha is rare and precious. Some Tsha Tshas are large and have relatively complex shapes.

There is no definite standard on the size of a Tsha Tsha, although generally, the maximum is about 30-40cm. Usually, a round-carved artwork higher than 30cm is not a Tsha Tsha, even though it is printed by mold. Tsha Tsha that are printed by mold and small in size are the most common kind, and there are very few existing large, inlaid Tsha Tsha. While each statue carved on them is very small, the limited space has no influence on artistic charm of Tsha Tsha. The maximum Tsha Tsha is about 40cm.

In Tibetan Buddhism, Tsha Tsha have a variety of uses. They were originally introduced to help in the progression and increase in Buddhism in Tibet to the less educated people who could not read the scriptures. These days, with almost everyone having an education and being able to read, their use is more defined within the Buddhist culture. The Tsha Tsha is a votive tablet that designates the fulfillment of a vow in Tibetan Buddhism. Tsha Tsha is also uesed to pray for good luck.

Both monks and normal people create Tsha Tsha to gain merit in the eyes of Buddha, although the tablets are mainly used to fill the inner shrines of larger stupas and statues. They are also used to dispel illness, provide atonement, and to pray for good luck. Tsha Tsha are worshipped in many places, including monasteries, temples, Mani piles, holy sites, mountains, and lakes.

0 Comment ON "Tsha Tsha – A Miniature of Tibetan Buddhism"