Tibetan arts originated from the rock paintings in ancient time and its contents ranged from animal images of deer, ox, sheep, horse, etc to hunting scenes. Tibetan arts have developed very well during the period of Tubo Kingdom. Especially after introducing Buddhism to Tibet, religious paintings made a further progress. The heritage of traditional Tibetan crafts and the fusion of India, Nepal and Han People’s art essence make Tibetan arts outstand in the world. Tourists can get a panorama view of Tibet arts through stone and rock carvings, murals, frescos, sand mandala and precious Thangkas. 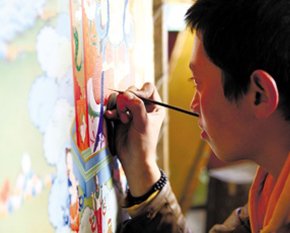 A Tibetan artist is absorbed in making Thangka.

Tibetan murals and frescos are the actual pictures of Tibetan history, from which you can find the trace of Tibetan politics, economy, culture, customs and medicine. And it also has abundant subjects, including Buddhist teachings, fairy tales, local lives, natural scenery, etc. The best place to appreciate Tibetan murals are Potala Palace, Jokhang Temple, and Ruins of Guge Kingdom.

Different from oil painting and frescos, Tibetan Thangkas are often painted on cloth, silk, brocade and paper. Most of them focus on Tibetan religions, depicting the life of Buddha and historical stories of important Lamas. While joining Buddha Exhibition Festival in Tashilhunpo Monastery, you’ll recognize how important Thangka it is to local Tibetans. 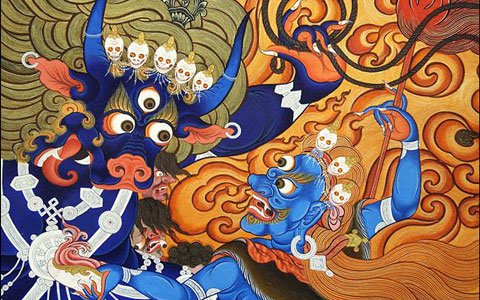 Traditionally, Tibetan Thangka paintings are designed to tell the life of Buddha, as well as other influential lamas and deities. Here you'll find more about Tibet Thangka art, including its origin, types,Thangka unveiling festivals, etc 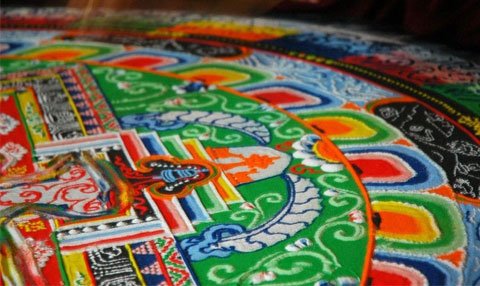 Sand Mandala in Tibet and Its Profound Philosophy

Sand Mandala is an unique art form in Tibet that portrays the profound philosophy of Buddhist idea of universe and life, such a artistic and philosophical carrier of Tibetan Buddhism. 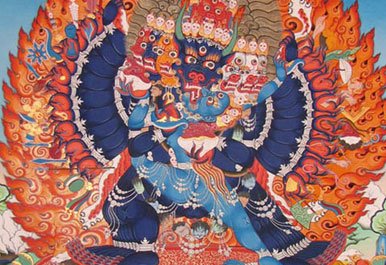 Tibetan Thangka is a Tibetan silk painting with embroidery, usually depicting a Buddhist deity, famous scene, or mandala of some sort. It is sometimes called a scroll-painting. There is also woodcarving basso-relievo Thangka. 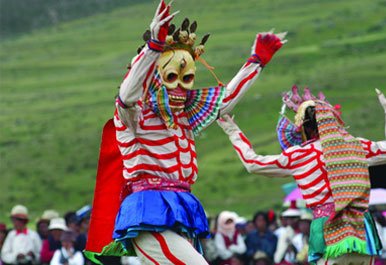 Qamo dance is a Tibetan religious dance of Tibetan Buddhism,usually performed in temples by monks with solemn and splendid atmospheres so as to subdue evil spirits in monasteries. 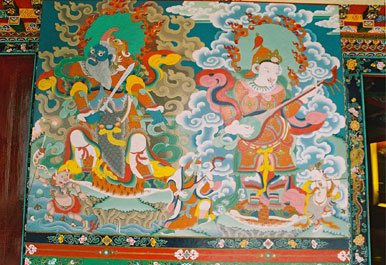 Overview of Tibetan Culture and Arts

In Tibet, you will always be amazed by the artistic wonders: the architectures, the prayer-flags, sculptures and Thangkas, songs and dances, which are representation of the Tibetan cultures. 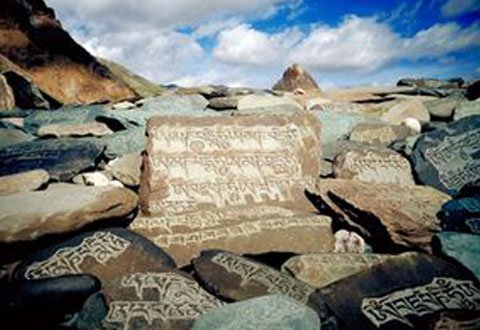 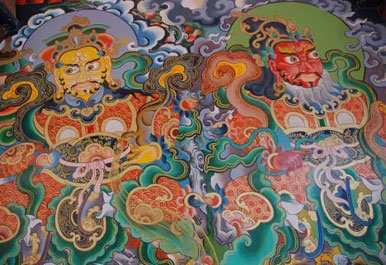 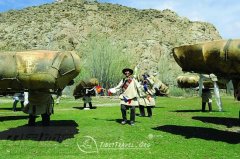 Bullboat dancing is a kind of folk art that has passed down generation by generation in Junpa, a small Tibetan hamlet. Nowadays, the dancing regained its vitality with the fast development of the tourism industry. Rutog rock paintings in western Tibet describing and recording Tibetan people's way of life and work during the early development of human society are precious cultural record from human ancestors for us.

Guge frescos mainly refer to the frescos in the Red and White palaces of the ruins of Guge Kingdom. 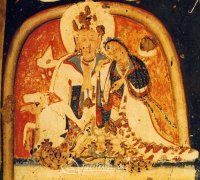 Donggar frescos are a recent and important archaeological discovery made by cultural heritage departments in Tibet. They provide the missing link on the subject of ancient Buddhist cave art in western Tibet.

A precious Thangka made of pearls

There is a precious Thangka made of 29026 pearls in one of the chapels of Trandruk Monastery, representing Chenrezi at rest. The Thangka is 2 meters long and 1.2 meters wide. The weight of the whole thangka is over 1.3kg.