When we travel to Tibet, we can often see various Tsha Tshas, unique clay figurine in Tibet. They are made of all materials and with the sculprural characteristics of different periods around some stupas and monasteries. Obviously, because of its small volume, Tsha tsha is convenient for early Buddhist pilgrims to take. Accordingly, with the development of Buddhism in Tibetan-inhabited areas, it was gradually integrated into the Tibetan local religious art. Exclusively made in Tibet, "Tsha-Tsha" is mainly small stupa and joss, which was the Buddhist artwork introduced from ancient India. Being a halidom used to express devout belief to Buddha and pray for good fortune, Tsha Tsha is widely spread among the Tibetans.

Tsha Tsha is a typical representative of Tibetan Buddhist arts, which is the precious treasure left to us by Tibetan ancestors, as well as an important part of human civilization.

Whether they are the relief images made out from one-side mould or they are round stupas completed by two-side mould.

Tsha Tsha is of various designs and takes round, square, and triangle as the main basic outlines, with the diameter varying from several to scores of centimeters. Some of them consist of a mere joss while some are comprised of hundreds of josses. The most common raw material for Tsha Tsha is clay, which is extruded to be demolded using concave-shaped mould, then is dried and shaped (in some cases firing and colored drawing are added). Wild oat or other mascots are embedded into the back of the clay joss at the time of making, so as to repose the maker's pray and wish. More valuable Tsha Tshas are made of precious medicines such as pearl, agate and saffron. Such figurines provide curing efficacies other than the role in spiritual bailment. The most precious Tsha Tshas are made of the mixture of clay and cremains of the late Living Buddha. They are taken as amulets which are believed to be capable of keeping off wickedness.

The purpose that Tibetan monks and lay persons make Tsha Tsha is to accumulate Buddhist merit. The completed Tsha Tsha is mainly used to fill the inner shrines of bigger stupas or statues. Tsha Tsha is also used as the object dispelling illness or praying for good luck. When they are in the use Thsa Tshas are worshiped at the places such as Tsha-khang, snow mountain, peaks and caves. 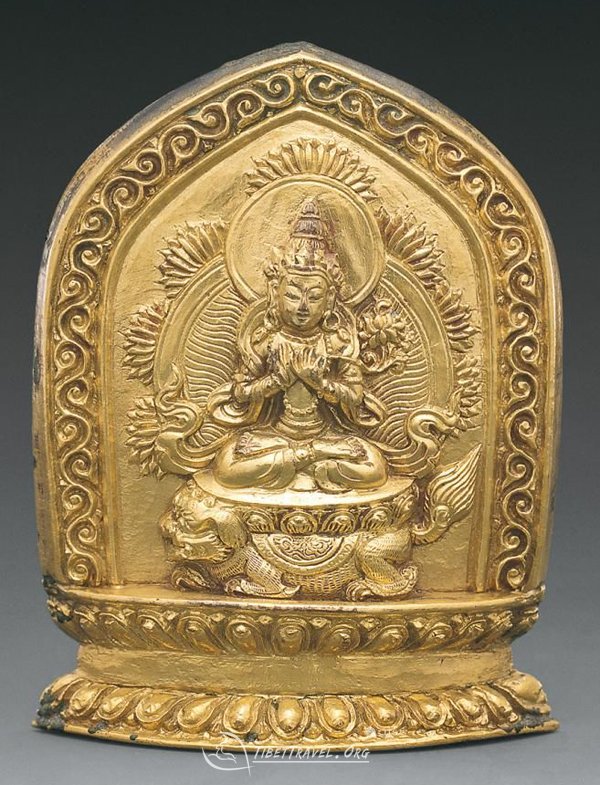 Tsha Tshas are usually used together with prayer banners and Marnyi Stones, which are frequently seen in stupa, cavern in Athos, the bank of Deity Lake, Mani stone mound and the way of turning scripture. Such places are built by Tibetans with numerous maisonettes used to accommodate Tsha Tshas. They are roughly of a person's height and are commonly known as Tsha Kang, meaning Tsha Tsha temple. In their view, Tsha Kang provided with more Tsha Tshas are more abundant in Buddha nimbus, and walking around such a Tsha Kang for one circle indicates saluting to Buddha, which can alleviate personal sin and increase good fortune.

As a perfect combination of decorative factors of painting, architecture and sculpture art, Tsha Tsha serves as the representative of Tibetan Buddhist art and handicraft and plays an important role in cultural exchanges between Tibetan and other nations.