As Tibetan Losar Festival approaches, Lhasa New Year markets have already been booming up. Roaming around Barkor Supermarket and Tromsikhang Street, we find that hundreds of thousands of new year goods have closely packed along the avenues and streets of Tibet. In addition to sweet candies and dried nuts, how much do you know about Tibetan new year gifts? Let’s follow our lovely local tour guide Tenphel to dig deeper into Tibetan new year celebrations and customs. Here we also make a video about What to Prepare for Tibetan New Year and hope you like it!

Chema Box is an essential mascot for local people to celebrate Tibetan New Year and other important Tibetan festivals. In Tibetans’ minds, tsampa stands for the essence of agriculture and yak butter represents the cream of animal husbandry, while Chema is the best combination of those two things. In addition, barley kernels, butter sculptures and colorful wheatears would be also placed in the middle of Chema Box, adding a kind of auspicious meanings. 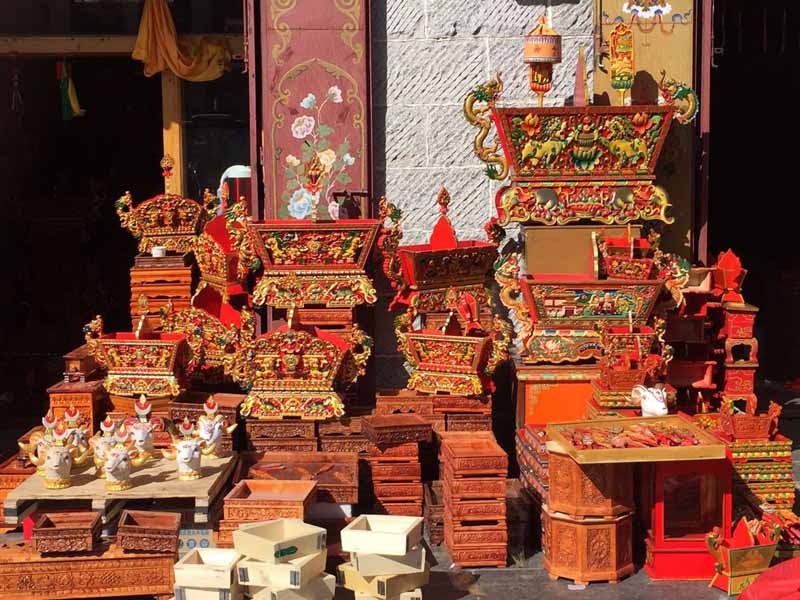 Butter sculpture is a special form of statuary art. Originating from Tibetan Bonism, butter sculpture is also known as the religious offering on the 15 day of lunar January. The whole working process can be divided into four steps, namely, making the framework of sculpture, developing a prototype, adding colors, and finalizing the design. Made out of yak butter, those delicate artworks are sculptured into various kinds of shapes, like Buddhas, figures, animals, flowers, etc. In the folks’ hands, a simple piece of yak butte becomes the most splendid mascot during Tibetan Losar Festival. Traveling Tibet in the new year, tourists must be deeply impressed by the colorful wheatears – Losar Meiduo. In Tibetan language, Losar means Tibetan new year and Meiduo implies beautiful flowers. Losar Meiduo inserting in the Qiema box is considered as an auspicious symbol of the coming bumper year. Losar Meiduo is a kind of stained wheat flower. According to Tibetan calendar, local people usually plant the seeds around April 15th and then water them in June. After reaping the wheat in September, Tibetans would dry them in the sun for almost one month and store them well in the house. Till Tibetan December comes, they begin to dye the wheatear in different colors to welcome the arrival of Losar Festival. 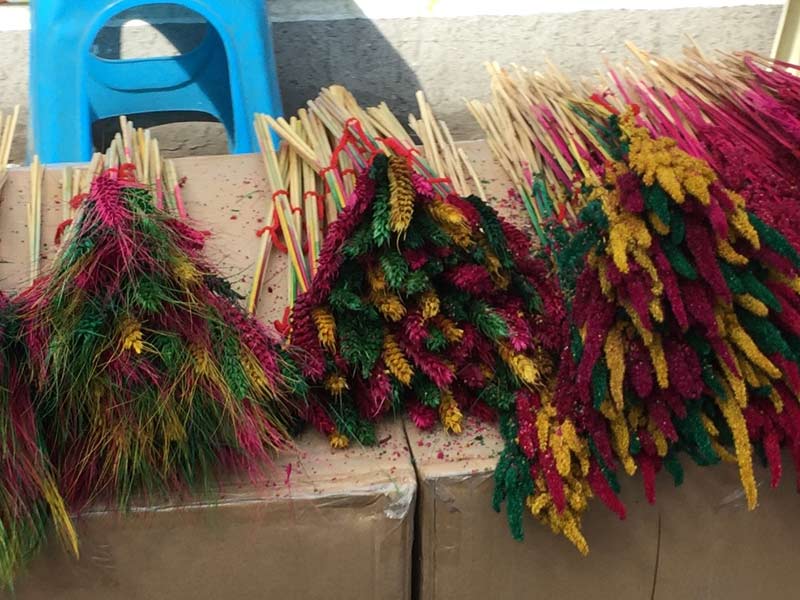 Tracing back to the history of the snowland, people living on the Qinghai-Tibet Plateau have considered the sheep as the lucky animal since the ancient time. The auspicious sheepshead, also called “Longguo” in the Tibetan language, is usually put in the middle of new year tributes, expressing hope for a rich harvest in the coming year. Wandering around Barkhor Supermarket, you’ll find that numerous sheep heads in different materials are sold out in this bustling place. Thanks to the durable quality and lower price, the ceramic product and lime sheepshead become extremely popular among local people. 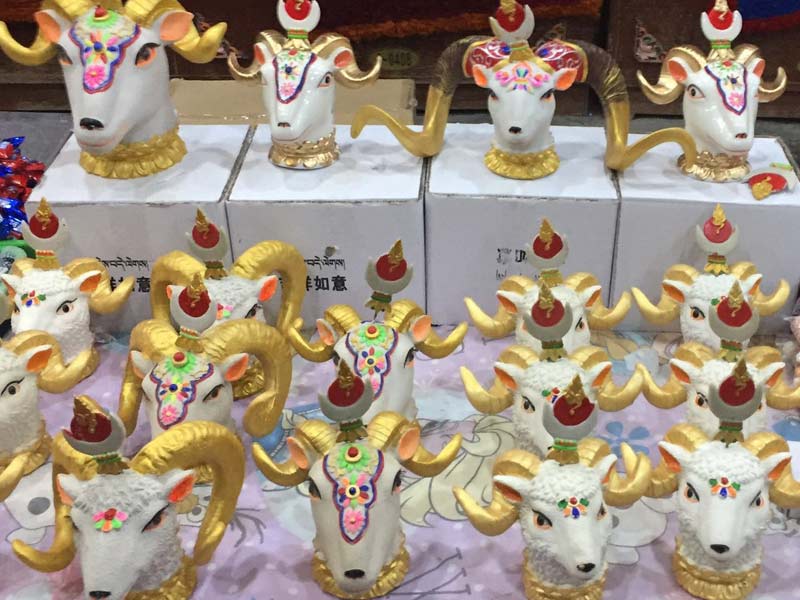 5. Green barley shoots, the first crop of the new year

Highland barley, the main food crop in Qinghai-Tibet Plateau, has been cultivated by diligent Tibetans as early as three thousand years ago. This ancient species can be resistant to low temperature, dry weather, and poor soil, benefiting Tibetan people for such a long time. In return, they endow divinity to it. When Tibetan Losar Festival comes, pots of green barley shoots will be placed on both sides of Kabsay, symbolizing people’s wishes for good weather and a good harvest in the next year. 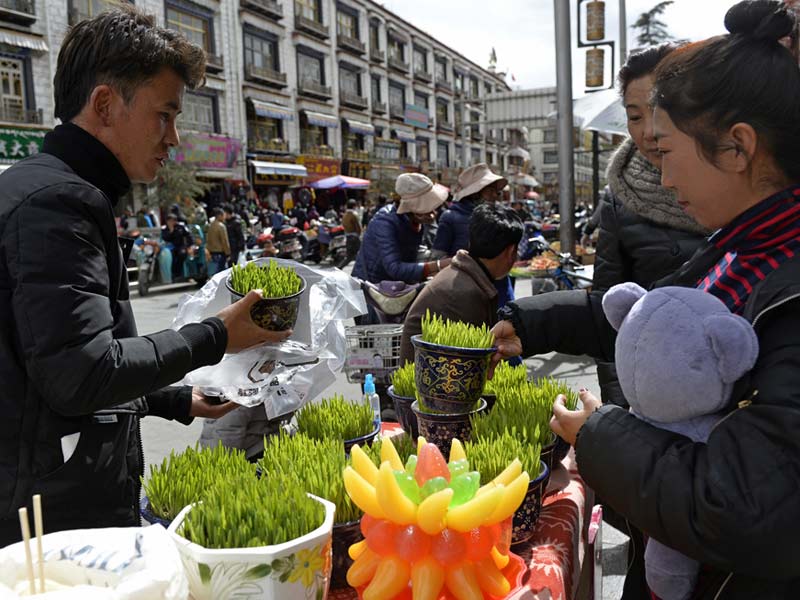 Green barley shoots, the first crop of the new year

Colorful valance is a special decoration for Tibetan architecture. It’s usually made of colorful silk cloth and hung on the top of doors and windows to make them look better. According to Tibetan local customs, those beautiful curtains should be changed every year for a good beginning in the coming year. On Tibetan New Year’s Eve, each household would clean up their rooms, replace new curtains on the doors and windows, and then set up prayer flags on the roof, indicating that the Tibetan new year is coming soon. 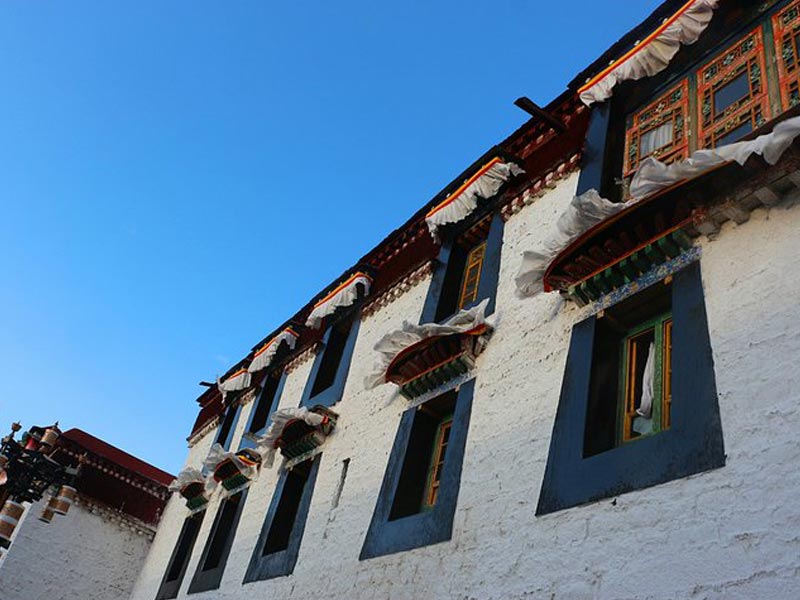 Tajue, meaning prayer flag tree, is an indispensable new year gift for local Tibetans. The colorful rectangular banners or the strips of cloth printed with religious patterns will be sewed on the branches of willow trees. And the order of the colors can not be changed arbitrarily but follow down from blue, white, red, green to yellow, which respectively symbolizes the sky, clouds, flames, waters, and soils. In accordance with Tibetan traditions, most people would choose to change the new Tajue on the third day of the Tibetan new year for good health and long life. 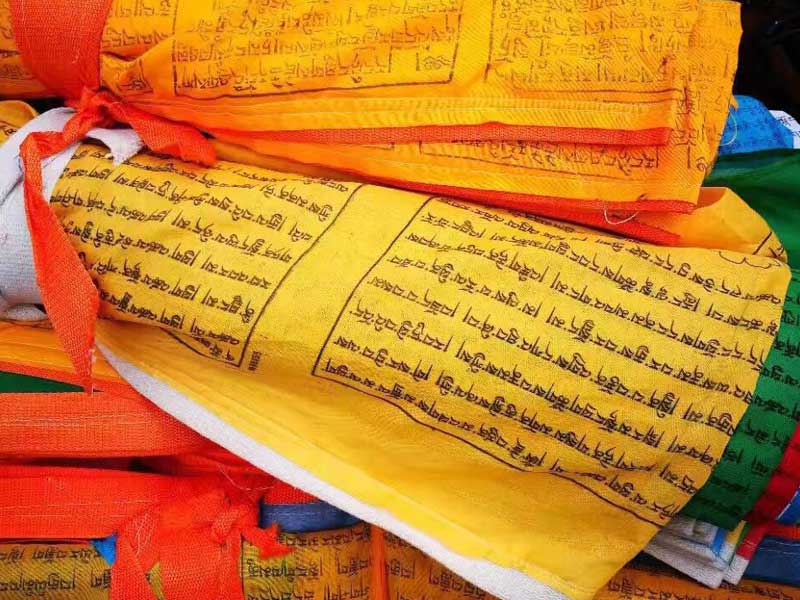 Kabsay is a kind of Tibetan pasta fried in butter. Because of its sweet odor and crisp taste, Kabsay is particularly favored by the locals. It has different kinds of shapes and colors, varying from red, yellow, green, orange to pink. Commonly, people would begin to prepare Kabsay one month before Losar Festival. Thus, as long as you travel Tibet in winter, you’ll smell it in the air. 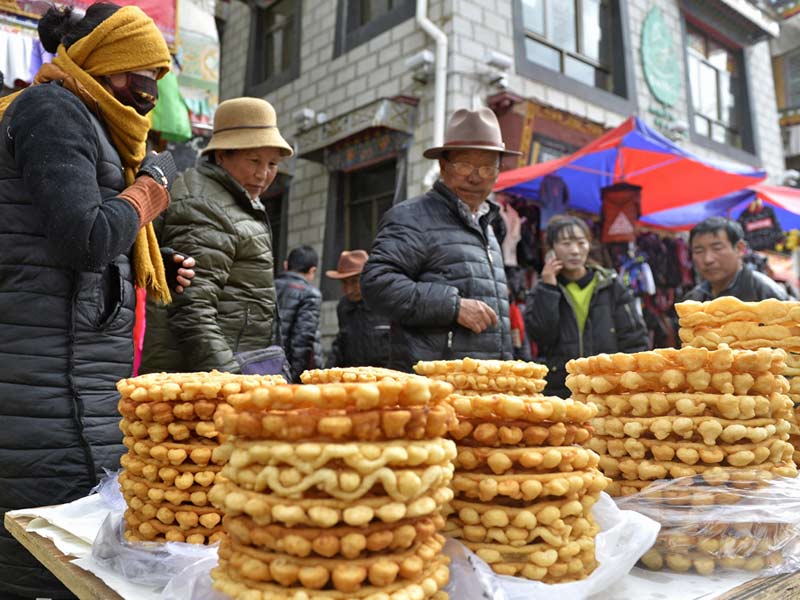 Of course, Tibet has more to offer at this hilarious festival. The best way to truly see what I’ve talked above is by visiting Tibet by yourself! Tibet Losar Festival 2021 will fall on February 12 and last for two weeks. Although time is limited, Tibet Vista is always ready here to work out an unique Tibet festival trip for you!

Top 8 Most Recommended Tibetan Tours in 2023