Is Tibet closed in March? Can I visit Tibet in March?

While in previous years, travel to Tibet has normally been closed from just before the Tibetan New Year celebrations of Losar to the 1st of April, this year is a little different. Now, if you are on a private tour, all international travelers can make the awesome journey to Tibet throughout March. This means that you can visit the opening of the stunning Nyingchi Peach Blossom Festival, which normally commences around the middle of March, and experience the high-altitude early spring on the Tibetan plateau, something that has rarely ever been seen by international travelers.

While this is amazingly good news, there are limitations. You must be either a solo traveler or traveling with friends or family of the same nationality and you must be on a pre-booked private tour of Tibet. The changes to allow travelers into Tibet in March do not include any Join-In Small Group Tours, which will still resume on April 1, 2021.

Tibet weather and temperature in March: Is it too cold to travel to Tibet in March?

Tibet weather in March is still pretty cold, and while the daytime temperatures can reach as high as 12 degrees, the nights are much colder, usually dropping to well below freezing. However, with almost no rain in the entire region throughout the month, March is actually a great time to travel. Tibet weather and temperature in March

March is the tail-end of winter and the beginning of spring, and the slight rise in temperatures across the plateau takes that bitter chill off the air, though there are still biting cold winds in some of the more remote parts of the region.

Visit Lhasa in March: What can I expect in Lhasa in the spring?

March in Lhasa is a sunny time of year, and while it can still be fairly cold, the weather is dry and the sun is shining, with clear skies. The Tibetan capital usually only sees around two days of rain throughout the month, and while it can be cold at night the altitude of the plateau makes the sunshine stronger and warmer during the day.

While Lhasa can be warm during the day, you will still need to bring some warm clothing with you, as the temperatures are not always as high as you might expect. And since some of the hotels in Lhasa still do not have central heating, you will need to have warm sweaters or jackets at night. 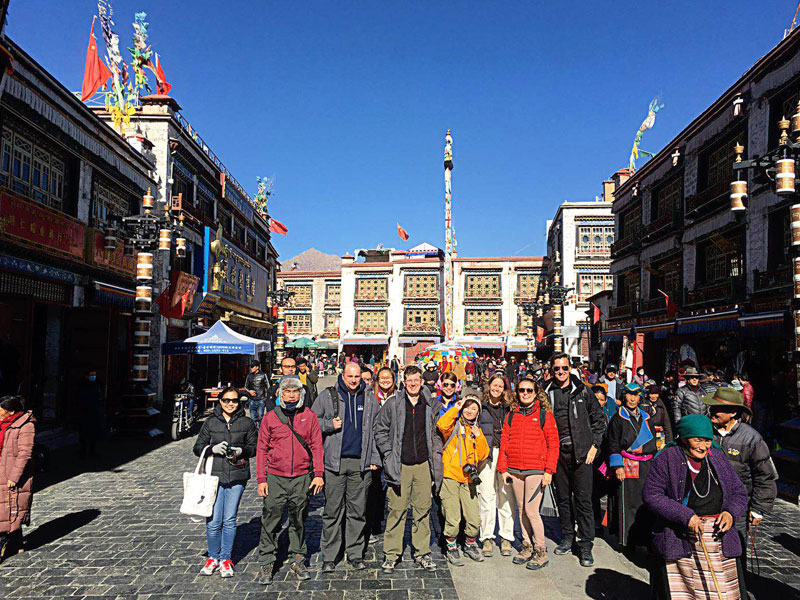 You can take a stroll at the busy Barkhor Street in Lasha city in March.

March is also not yet the start of the main tourist season, so you can expect to see fewer tourists in the region throughout the month. And with fewer tourists, touring the many temples and monasteries of the capital are a much better experience, as they are not as crowded as in the peak of the summer months. Fewer tourists and still being the low season also means that you may get discounts on accommodation and flights or train tickets. – Check the detailed itineraries of Lhasa tours

Travel to Nyingchi in March: Can I see peach blossoms flourishing in March in Eastern Tibet?

While most of the rest of Tibet is still cold, with temperatures still dropping below freezing at night, Nyingchi is already experiencing spring, and the middle of March usually sees the start of the Nyingchi Peach Blossom Festival. A massive festival that is held across the prefecture for almost a month, this unique event is only found in this part of Tibet, and has been held by the local people since 2002. And for the first time, travelers can see the festival as it starts, in March. There are many places that you can visit in Nyingchi to experience the Peach Blossom Festival, and each has its own version of what the festival consists of. However, in general, you can expect to see the peach blossoms in full bloom across the prefecture, as well as watching performance of horsemanship, horse and even yak racing, archery contests, wrestling matches, weight-lifting competitions, and the amazing Peach Blossom Photography Contests, in certain areas. – Check the detailed itineraries of Nyingchi tours

Can I visit Lake Namtso in March? Will it snow in March?

Lake Namtso, which lies around 100 kilometers to the north of Lhasa, is a stunning lake that is one of the Great Three Holy Lakes of Tibet. However, there is a high chance that you may not be able to visit the lake in March, due to the extreme weather conditions that can be found in the area. Lying on the boundary between Lhasa and Nagqu Prefectures, this stunning lake is frozen over throughout the winter months, and March can be just an extension of winter around Lake Namtso.

The climate around Namtso Lake is dry, cold, and snow still in March, and with heavier snow in the area than to the south in Lhasa, the Nagenla Pass, which leads to the lakeshore, is often still blocked by snow.

Lying around 100 kilometers to the southwest of Lhasa, Lake Yamdrok is one of the amazing attractions that you can visit on a tour of Tibet, and lies on the route to Gyantse and Shigatse. The lake does have a tendency to freeze in some parts in the depths of winter, but by March it is already thawing out, and daily temperatures can reach a decent 15 degrees, making the stop at the lake pleasant and exciting. With the colder and crisper air, as well as the dry climate, Lake Yamdrok is an amazing sight in the early spring, with the bright sun shimmering off the almost freezing waters, and the reflections of the mountains that surround this vital Tibetan lake. 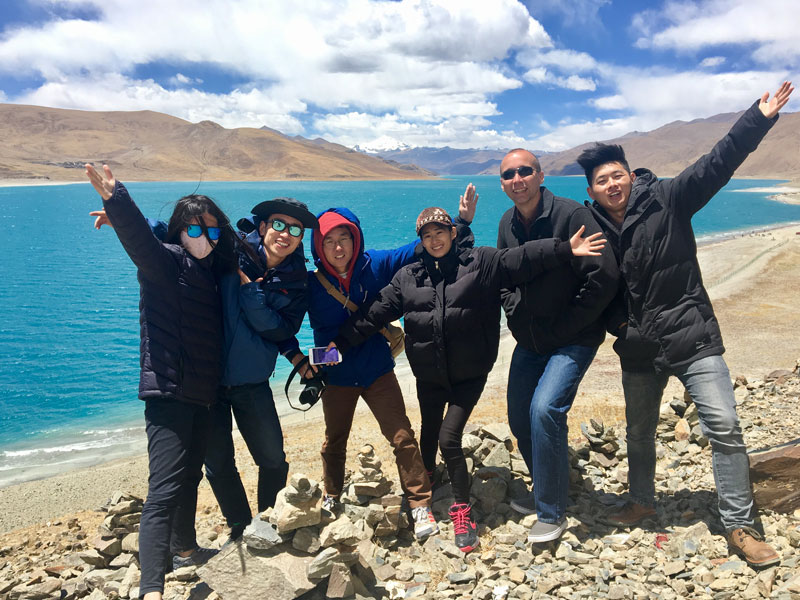 The iconic turquoise Yamdrok lake will blow your mind away in March.

What to see in Shigatse in March?

Lying at an altitude of around 3,900 meters, Shigatse is the second city of Tibet and the home of the famous Tashilhunpo Monastery. Renowned as the seat of the Panchen Lama, the second-highest incarnation in Tibetan Buddhism, this ancient monastery was founded in 1447 by the first Dalai Lama. The monastery sits halfway up a rugged mountain on the edges of the city, and with the surrounding landscapes, the views are stunning.

To the southwestern end of town lies the amazing walled complex that is the Summer Palace of the Panchen Lama. Built-in 1844 by the 7th Panchen Lama, this rarely-visited palace is an amazing experience that contains many stunning Buddhist relics.

The Shigatse Dzong, which lies on a hilltop in the city, was once the residence of the Tsang Kings, and bears a huge resemblance to the Potala Palace in Lhasa. Also the former residence of the governor of Tsang, this destroyed and rebuilt Dzong is an impressive sight on the Shigatse skyline.

EBC tour in March: Can I catch a clear view of Mount Everest in March? What should I wear?

Everest Base Camp (EBC) is one of the main reasons people travel to Tibet, and while it can be bitterly cold around the mountain in March, with temperatures as low as -8 degrees at night, the daytimes can be a little warmer, reaching as high as 5 degrees. This may not be warm to most, but with the bright sunshine on the base camp and the reduction of the biting winds that sear the mountain throughout the winter, it can be comfortable with the right warm clothing. You will need a hat, gloves, and sun cream, as well as plenty of layers of warm clothes, and a visit to EBC is still possible in March. You can also get a very good view of the summit of this world’s highest mountain, as the skies in March are clear and bright, with barely a cloud in sight. Our clients were enjoying their lifetime journey to Everest Base Camp in March.

Is it possible to trek the Kailash Kora in March 2019?

The area around Mount Kailash may be warmer by the time March rolls around, with daytime temperatures of up to five degrees, but this is still not a good time to trek the ancient kora route around the world’s most sacred mountain. An icy chill permeates the area around the mountain until around the beginning of April, when the temperatures warm up more. Roads to the mountain can also still be blocked by snow in March, and the region of the plateau often sees small blizzards that can jeopardize a tour to the mountain and the trek around it. It is best to wait until at least April before attempting the Kailash Kora Trek.

What travel documents do I need for a Tibet tour in March?

As with all tours to Tibet, travelers to the region in March will need to have a Chinese Entry Visa or Chinese Group Visa, the Tibet Travel Permit, and be on a pre-arranged private tour with a registered Tibet tour operator. Depending on where you travel, you may also need certain other permits, depending on where you are traveling.

Visit Tibet in March: what to expect in March to Tibet 2023