Tibet Weather in March: Tibet temperature and how to plan a Tibet tour in March

The tail end of winter, Tibet is still cold in March, despite March being known as “spring” across the globe, as the true spring does not really start until April on the plateau. Only in the east of the region is March considered as springtime, while in the western areas, there is very little change in the temperatures and weather conditions. On average, temperatures across the region range from -2 degrees to as high as 12 degrees, and with a slight chance of rain in the lower-lying areas of Tibet.

However, the brighter sun does make the month feel warmer than February and January, the two coldest months in Tibet, and touring can be comfortable and pleasant. The weather is cold but sunny, and the winds are not as strong and harsh as through the winter months. 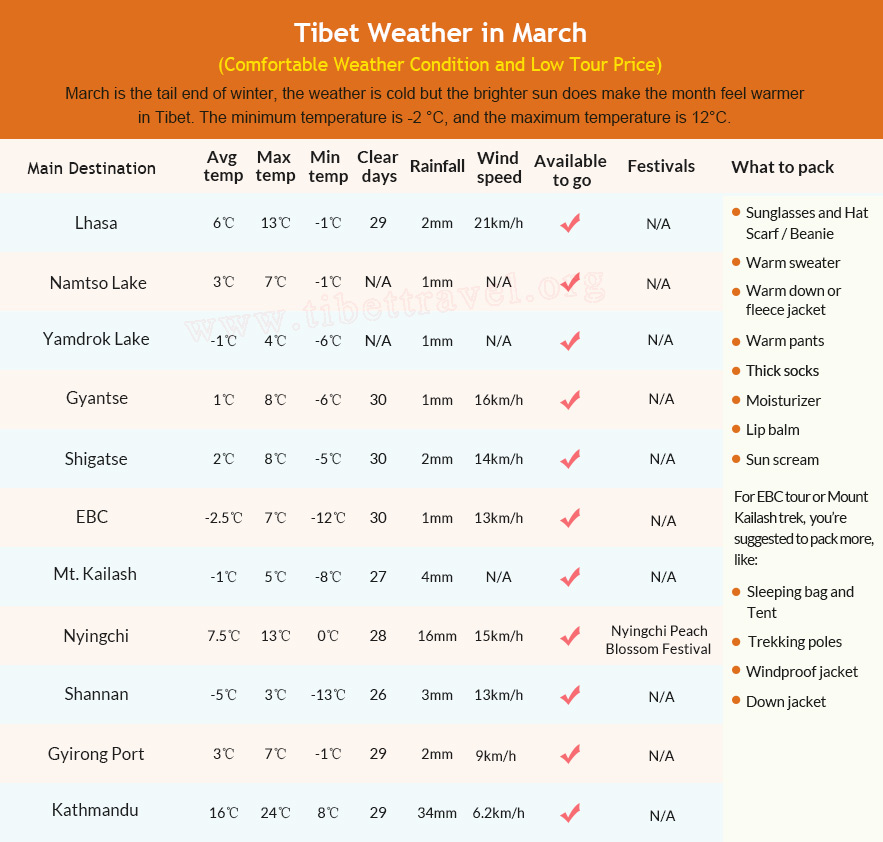 March is still considered to be the low season for tourism in Tibet. In areas such as Lhasa, the weather is warmer than in the west, and temperatures of around 12-13 degrees during the day are normal. While it can drop to as low as -3 at night, it is not too windy, so the cold is less harsh, and you can use warm jackets and sweaters to stay warm easily. March is also a good time for touring around the area of Lhasa and Shannan, where the weather is slightly warmer, and on down to Nyingchi, where spring has already begun.

March in Lhasa is a sunny and dry time of year, albeit somewhat cold still. However, while it may be cold at night, the stronger sunshine makes the days warmer and comfortable for touring around the amazing sights of the city. And the morning frosts also make the stunning sight of the Potala Palace, on its little hill, even more beautiful as the roofs glint in the morning sun.

March is the start of spring at Lake Namtso, but feels m ore like an extension of winter, as the temperatures are still cold and the lake is often still frozen. Temperatures may have risen a little, often enough to open the Nagenla Pass, but with temperatures only reaching as high as 3-4 degrees, it can still be very cold.

A popular time of year because of the Peach Blossom Festival, Nyingchi is a delightful place to visit in March, when the spring has already arrived in the area, while the rest of Tibet is still in the last grips of winter. Blue skies dominate through March, with only a little rain in the late evenings occasionally. Skies are mostly clear, and the warmer weather makes it an ideal start to any Tibet tour. 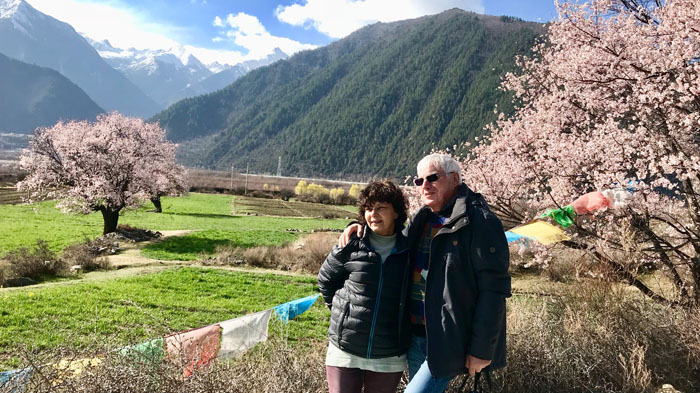 The couple were enjoying the Peach Blossom Festival in March, Nyingchi.

March sees the temperatures in the daytime warming up in Lhokha, though it is still fairly cold in the south of Tibet, with low average temperatures through the month. With a high drop in temperatures at night, the best of Lhokha still cannot be explored thoroughly, and Tsedang is the best place to travel to at the start of spring.

March at Yamdrok Lake sees the ice melting and the turquoise waters showing through again for the first time since December. As the ice melts and the lake becomes habitable once again, the islands once again become filled with birds, which make it a great time for bird watching on the lake’s five islands. Bird Island, the largest of the five, is the ideal place as it is a haven for local and migrating birds heading north from the winter feeding grounds.

With its location close to Lake Yamdrok, Gyantse sees similar weather patterns, and March, while still being the start of spring, is still cold in the city, with winter’s icy claws still deep in the ground. Lying in the river valley, surrounded by mountains, this quaint city awaits the start of April.

Shigatse is a cold city in March, with nightly temperatures that are well below freezing, and days that barely reach 4 degrees. Warm clothing is required, as the weather can get colder with the last of the biting winter winds still whipping across the plateau and down the parallel valleys that converge at the city.

Not yet spring in the area of Mount Qomolangma, March is a cold time of year at EBC, with extreme lows of around -12 degrees at night, making it impossible to stay overnight at the base camp. Days, however, are bright and clear, with temperatures getting as high as 7 degrees. You will still need warm clothing, though. Read more about EBC tour in Tibet.

March in the area of the Gangdise Mountains where the sacred Mount Kailash lies is still in the depths of winter, and the snow still covers the pass of Dolma La on the famous Kailash Kora route. With temperatures dropping as low as -8 degrees at night, it is still not possible to trek at Kailash. 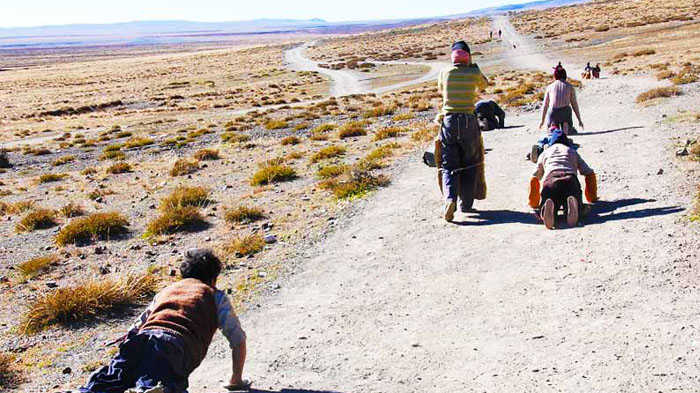 Devout pilgrims are prostrating themselves on the way to Mt. Kailash.

Lhasa to Kathmandu Overland in March

While much of western Tibet is still in the grip of winter, with no respite until April rolls around, the route from Lhasa to Kathmandu is still open, and the scenery along this unique route in March is sparse and arid, with patches of snow and dry desert-like landscapes. However, once you get past Peikutso, and into the Gyirong Valley, the landscape changes, giving way to verdant foliage and lush meadows. As you then continue across the border into Nepal, the landscape gets more tropical with every mile traveled. Lower than the rest of the plateau, Gyirong has warmer temperatures in March, reaching around 7 degrees in the daytime.

The road trip from Lhasa to Kathmandu (and vice versa) takes around 7-8 days, and is one of the most stunning adventures on the plateau. You travel through the major cities of Tibet, from Lhasa to Gyantse, and on to Shigatse. Then you will have the chance to visit Mount Everest and the Rongbuk Monastery, noted for being the highest Tibetan Buddhist monastery in the world.

After leaving the famous mountain behind, you will take a circuitous route past two stunning lakes to get to Gyirong Town, the last major town before the road takes you to the border with Nepal. On the last day, your guide will take you to Gyirong Port, the border checkpoint on the Sino-Nepal border, where you will exit China and walk across the bridge into Nepal. The Resuo Bridge, which spans the awesome Trishuli River Gorge, is the crossing point into Nepal, across this stunning natural boundary, and on the other side, you will be able to arrange your visa for the drive down through the lush and spectacular valleys and forests to the exotic Nepali capital of Kathmandu. For our clients, our tour offers transfer service from Gyirong Port to Kathmandu for 60USD/person.

Insider Tips: If you prefer to travel overland from Kathmandu to Lhasa, in addition to the Tibet Permit, you need to apply for the China Group Visa, using your original passport, in Kathmandu. Our staff will help you get it, and will meet you once you arrive to process the visa on your behalf. Processing does normally take around three working days at the Chinese Embassy in Kathmandu, so it is advisable to arrive in Nepal at least five working days before your expected date of travel to Tibet. Our professional travel consultants will help you deal with all the details and understand the requirements.

There are some great festivals to see in Tibet during March, and while most are religious in origin, there is one amazing festival time that is wholly regional. The Nyingchi Peach Blossom Festival usually begins around the middle of March, and lasts for around a month, when the stunning pink and violet peach blossoms cover much of the area, especially along the banks of the Niyang River and along the road to Sichuan. 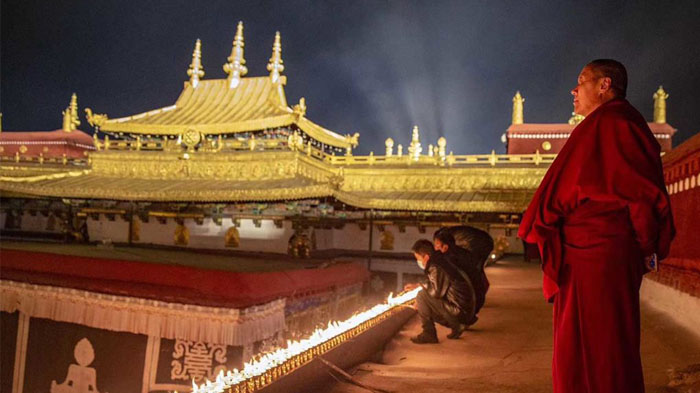 Tibetans are lighting butter lamps on the roof of Jokhang Temple.

Depending on the date of the Tibetan New Year, which can change from year to year, there can also be two religious festivals in March in Tibet. The Butter Lamp Festival, which occurs on the 15th day of the first month of the Tibetan calendar, can sometimes fall in the beginning of March, while the Great Prayer Festival, one of the greatest religious festivals in Tibetan Buddhism, falls on the 1st to 25th days of the first month in the Tibetan calendar.

What to pack for traveling Tibet in March?

If you are thinking of traveling to Tibet in March, then you should prepare your packing depending on the area you will be visiting. In most of the region, cold weather still prevails, and you will need to include warmer clothing, such as layers of tops and fleece jackets, with warm socks and boots and a good warm hat. Sun cream, moisturizer, lip balm, and your sunglasses will also help to protect your face and skin, as well as your eyes, from the bright and damaging rays of the sun.

In the eastern areas, in Nyingchi and Chamdo, the weather is already milder, and less warm clothing is necessary, though you will still need warmer sweaters or jackets in the evening and at night. Temperatures can still drop close to freezing, despite the warmer daytimes. There may also be some snow melt run-off in these areas, which can make it wet, so good boots are essential.

March has always been closed for travelers in previous years, and with a new opening of the plateau to travelers this year, a new opportunity has opened up for tours in the region. The early part of spring is one of the most beautiful times of year, with the snows and ice starting to melt in the east and even the western areas are getting warmer. New growth of grass and the blooming of the buds on the trees is an amazing sight in this barren and sometimes desolate land, and make a great change from the snow-covered view of winter or the lushest green of the peak season of late spring and summer. March is a great time to tour around the region in the lower elevations, especially in the Tsedang area of Shannan Prefecture, and along the Friendship Highway to the border at Gyirong Port, from Lhasa. 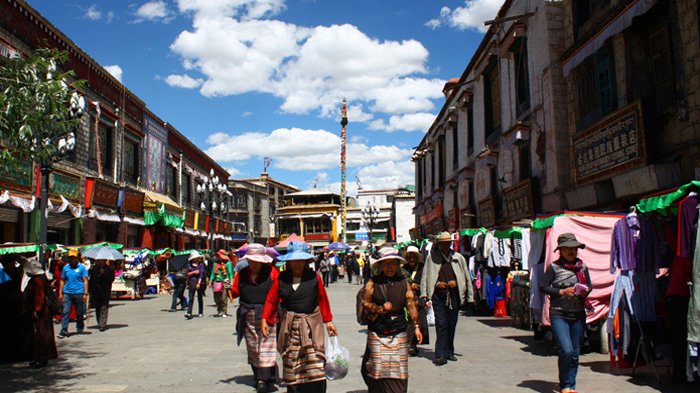 Local Tibetans are wandering on Barkhor Street in March. 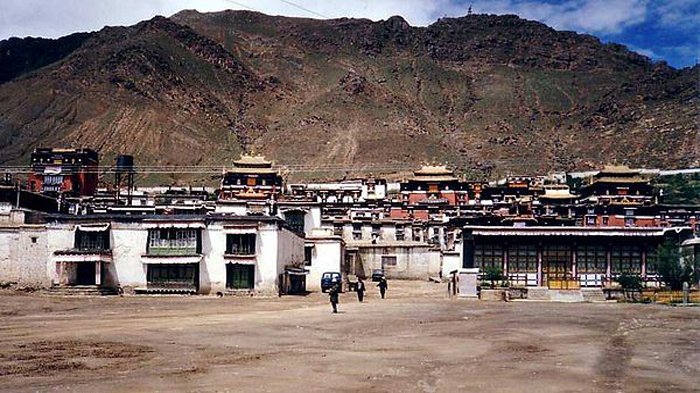 You can visit Tashilhunpo Monastery in Shigatse, the second-largest city in Tibet. 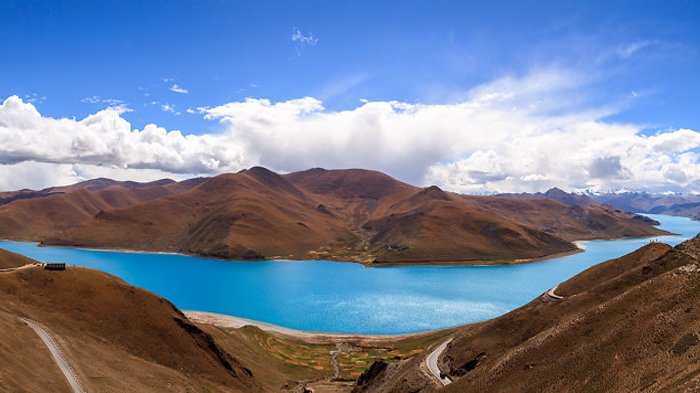 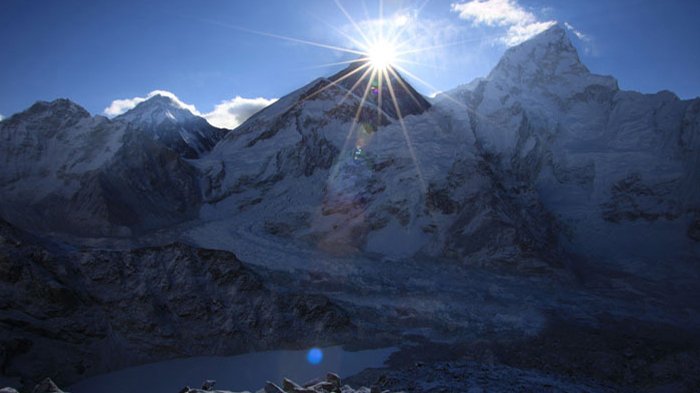 Sunrise from the summit of Mount Everest 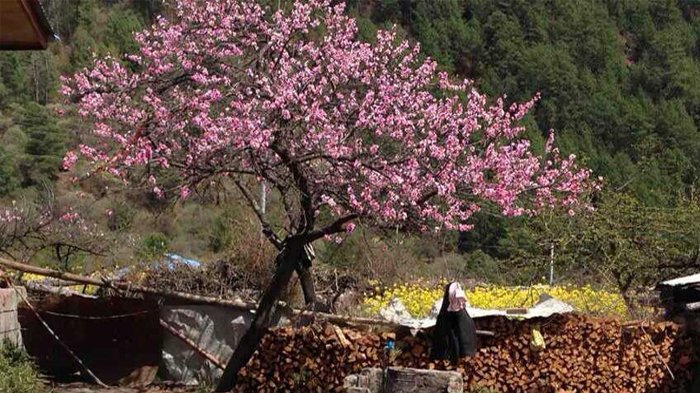 0 Comment ON "Tibet Weather in March: Tibet temperature and how to plan a Tibet tour in March"