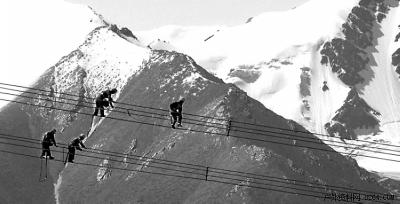 the workers are checking the electricity of EBC

The base camp of Mount Qomolangma, or Mount Everest, at an altitude of 5,200 meters, now has access to reliable electricity, the Tibet Branch of the State Grid Corporation of China said on Wednesday.

"Electricity reaching the base camp is as great as humans ascending to Qomolangma's summit," said Gonpo, 81, who was among the first mountaineers to climb to the top of Mount Qomolangma, making history by ascending the mount from its North Col in 1960.

Gyalpo, 50, a monk at Rongpo Monastery, can now watch television without interruption for the first time in his life thanks to a two-year rural power grid upgrading project.

Rongpo Monastery, about 8 km away from Qomolangma base camp, is the world's highest temple.

More than 160,000 people like Gyalpo in four counties at the foot of Mount Qomolangma will benefit from the project, which cost 570 million yuan (92.7 million U.S. dollars).

"About 200 workers set up 85 kilometers of lines at an average altitude of higher than 5,000 meters to send power to Qomolangma base camp, where the oxygen level is less than half of that in plain areas," said Palbar Dondrup, who is in charge of the project.

The connection has been welcomed by tourists, scientists and locals.

"It will bring great convenience to our scientific research and safeguard our use of high-power equipment," said Wang Zhongyan, a researcher with the Institute of Tibetan Plateau Research with the Chinese Academy of Sciences.

"With reliable power, we can use different monitoring methods to get more data to know more about environmental changes in the Qomolangma region," said Wang, who carries out about 10 scientific research projects at Qomolangma base camp every year.

Rigzin, a woman in Dingri County, is planning to buy a washing machine so she will not have to tolerate cold water during the winter.

The Chinese central government and the State Grid will invest 8.1 billion yuan to bring power to places without electricity in Tibet and upgrade the existing rural grid between 2013 and 2015, according to the Tibet Branch of the State Grid.

An additional 440,000 Tibetans will have access to electricity when the projects are completed.

Qomolangma base camp is just the starting point.