Founded by the great master Je Tsong Khapa, Drepung Monastery is the largest monastery in Tibet and the residence of Dalai Lamas. As one of the three Gelug monasteries (the other two are Ganden Monastery and Sera Monastery) in Lhasa, Drepung Monastery occupies a prominent position in Tibetan Buddhism. For tourists traveling in Drepung, monk debate is a must-see. This special form of learning of Buddhist doctrine can be only seen in Tibetan monasteries. Even as an onlooker, you’ll be infected by the warm atmosphere at the spot.

Monk debate is a form of discussion of Buddhist knowledge which originates from India. It’s also a kind of method for monks of learning and a regular test of their Buddhist knowledge. As a challenging discussion, the two sides often debate drastically. Debaters often employ various gestures to enhance the intensity of the debate. They either rush to urge the other party to answer the question as soon as possible, or pull the beads as a way in resorting to the power of the Buddha to defeat each other. At the annual dharma assembly, monks to be tested must debate against several elders at the same time to obtain the highest rank of academic degree Gesila Ramba(equal to the PhD degree).

If one side is cornered, beholders will “boo” to him loudly, and the defeated one should put off his hat until he defeats the other side in the following rounds. During the debate, debaters are only allowed to answer “Yes” or “No” or “Uncertain” and shouldn’t bosh to muddle through. Therefore, it’s easy to find out who is the winner. To those visitors who even don’t know Tibetan, the whole procedure will not be boring. Aggressive momentum and dramatic gestures are attractive enough to make the visitors deeply infected.

Monk debate in Drepung Monastery starts at around 2:30 pm every day from Monday to Friday in the main debating courtyard in the northeast corner of the monastery. It’s usually held inside different colleges respectively. Among them, debate in Drepung Gomang College is renowned among all the Gelug Monasteries (Ganden, Sera, and Drepung) for its emphasis on and expertise in the field of logic. In Drepung, monk debate is not as large-scale as that in Sera Monastery, but you can still see the monks debating raptly and drastically, totally ignoring the curious tourists. 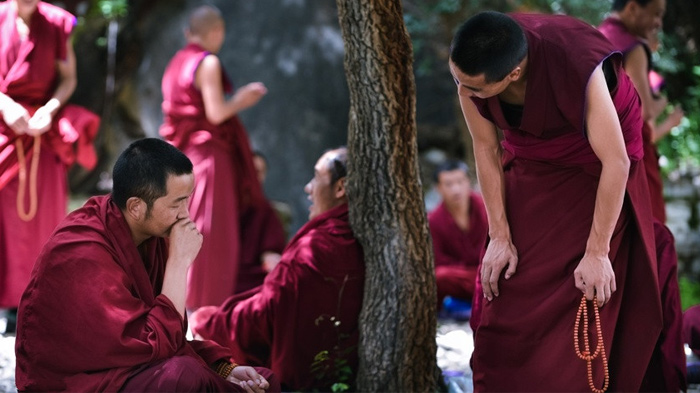 Usually, the debate is held in two forms. One is to debate one-to-one with one people come up with a question and the other to answer without asking back. The two sides take turns to ask and answer in this way until one side fail to pose a question.

Another form of debate is with one monk asking questions to a group of monks. There is no limitation of the number of monks joining in the debate. They sit down in a circle, with one or more questioners propose an argument to be refuted. The defender is not allowed to asking back. During the debate, the questioner can scream loudly, clap hands to cheer on, twirl the beads, lift frocks or pace back and forth. Or they can also taunt the defender by pat their bodies and other movements.

Every weekday in the afternoon in Drepung, you can hear monks debating drastically with hands clapping as you approach. During the debate, you’ll see them debating vigorously by employing some gestures and movements which enliven the ambiance of the occasion. Each gesture has the different meaning and some of them are said to have symbolic value.

When the monks gather at the debating courtyard, an eminent monk wearing a yellow miter will make some brief opening remark. And then, the hot debate would begin. A questioner comes up with a question to the other, raising his right hand high and clapping two hands dramatically while waiting for the defender to answer. Rising the right-hand means that the wisdom of Manjusri Buddisattva is right behind. After clapping, the questioner will pull back the right hand. It indicates that they hope to save the suffering people in their good thoughts and wisdom. As to the sound of hands clapping, there are three aspects of meanings:

In the debate, there are two ways of hands clapping. The one is to clap with two palms to mean the right. However, if the questioner claps the hand back with palm, it refers that the defender has got a wrong answer. At this time, the opponent will gesture three circles with his hand around the defenders head followed by loud screaming to unnerve the defender; if opponents have a mistake, it is demonstrated by wrapping his upper robe around his waist.

Since it is a debate, the verbal confrontation between each other is inevitable. In order to pursue the truth, there will occasionally be physical conflicts, such as tripping the other side to the ground. Of course, these conflicts are purely for knowledge, not with personal emotions. In the opinion of monks, the only purpose of the debate is to pursue the truth. "For the sake of the truth, you can argue with others fiercely, and no one will mind.” said the monks.

Standing, sitting, asking, and replying, you can see monks in Drepung concentrated in their religious and philosophical world. At this moment, exoteric hustle and bustle are totally away from them. All you can see is their ardor and concentration. They frown or laugh, raise hands or put them down, exploring the truth in their own way. In some sense, they are not just debating about Buddhist doctrines but also the truth of life.

Tips: Taking photos of debating monks requires another ¥15. Please be respectful and do not open flashlights or take close-up shots of them without their permission.

How to Plan to Enjoy Monk Debate in Drepung Monastery

Opening time of Drepung Monastery is from 9:30 am - 5:30 pm every day, and the ticket price is 50RMB for each person. However, many chapels are closed in the 3:30 pm. Some even close in 2:00 pm. Besides, since the monastery is built on a mountain hill, it will take you much time to climb on if going to hike to it. Therefore, it’s strongly recommended for you to arrive the monastery at least in the noon if you want to visit all the chapels. 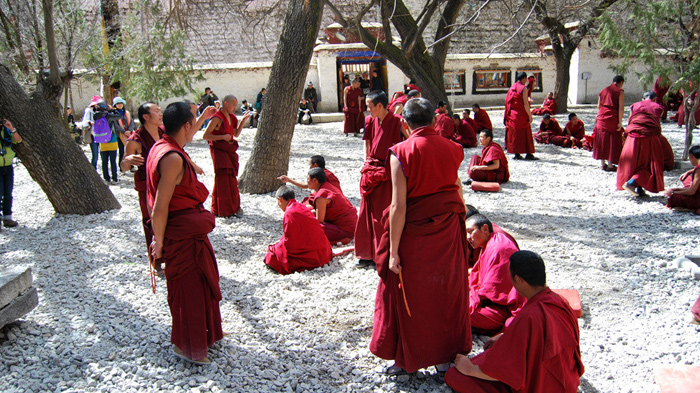 Monk debate begins at 2:30 pm everyday afternoon. It usually lasts for two hours through the afternoon, and sometimes well into the evening. There are four Zhacangs (academies) in Drepung, and each has its own debating courtyard where the daily debates are held. Since Drepung Monastery takes a large area, it’s easy for tourists to lose their ways in it. So it’s advisable for you to set off to debating courtyard in advance. In the monastery, you may come across some monks. You can also ask for directions to them.

Because of the special terrain, complicated and diversified climate is formed in Tibet. The peak tourism season in Tibet falls between May to October during which the climate is mild and temperature is moderate, very suitable for traveling. From July to September, Tibet welcomes its rainy season. The temperature is warm and it has high oxygen content in the air. But you don’t have to worry about the rain for it mostly rains at night. In the daytime, it’s basically sunny, while it could be helpful to carry with an umbrella.

How to Get to Drepung Monastery

Another way is to take a Midibus 301 or Midibus 302 in the central downtown to the foothill. Sometimes, there are also midibuses or trucks taking passengers up to the mountain. It costs only ¥1.

The most convenient way is to hail a taxi to directly take you there. It spends ¥20 to the foothill and ¥30 to the top.

Since located in the outskirts of Lhasa, it’s more difficult to hail a taxi to leave Drepung Monastery. You can take a bus back to downtown or take a private vehicle, which generally takes about ¥20.

Pay Attention to the High Altitude

Located in the col of the southern slope of Genpei Wuzi Mountain, Drepung Monastery has an average altitude of 3,800m. For most tourists traveling Drepung, it will be a challenge to climb mountain in such a high altitude. So if you decide to climb to the monastery from foothill, be sure not to push yourself and stop for a rest when hiking. Located on the hillside, it takes strength to climb to Drepung Monastery

If you want to witness the attractive monk debate in Drepung Monastery, please feel free to contact us. We are ready to offer you an unforgettable tailor-made Drepung tour for you.