Tibet is a land of customs and traditions. Woven in its air is a deep sense of spirituality that never fails to enamour the inhabitants as well as the tourists. Tibet is known for its unique rituals, distinct belief system and religious accessories that Tibetans use to worship and pray. Thinking about Tibet, the first few things that crowd our mind are snow laden peaks, monasteries, prayer wheels and flags. Prayer flags of Tibet are not general flags but they are hoisted with some true intentions and beliefs. They form an important part of Tibetan value system. Prayer flags of Tibet are hoisted with some true intentions and beliefs.

Origin and Meaning of Tibetan Flags

A prayer flag is a coloured cloth often found on mountain peaks. These flags can be spotted quite frequently here and there while trekking Tibet. Tibetans put them on high mountain peaks, so that they could bless the surroundings. These flags often have holy mantras on it and it is believed that whenever the wind blows these mantras travel through air. 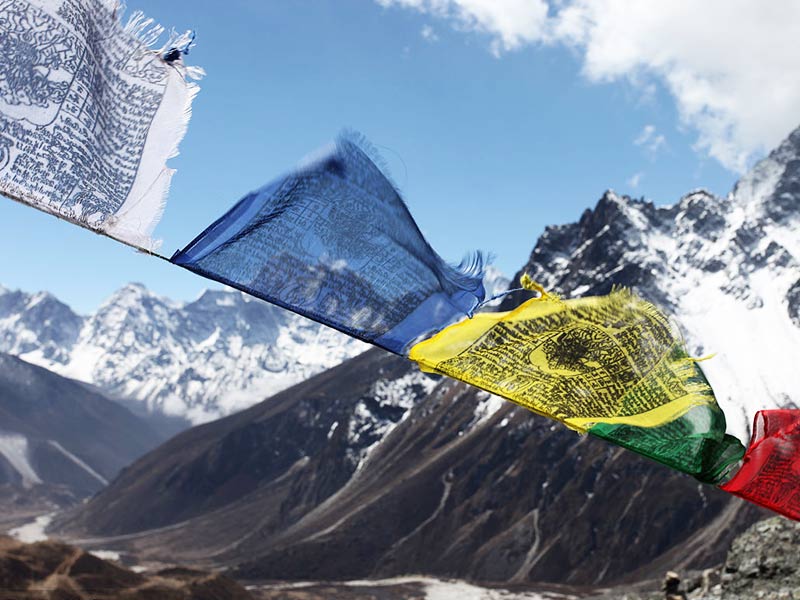 The wind blows these mantras travel through air.

Prayer flags are said to have originated with the bonists. While prayer flags have their association with Tibet, in all probability, the idea has been carried from India. Legend says that their origination can be traced back to Gautama Buddha. His prayers were written on the war flags. Tibetans have heard about these flags for more than two centuries but it was only after 1040 CE, that prayer flags came to be used as they are used now in Tibet. They are also used to foster peace, strength, compassion and wisdom.

Tibetans are very particular about the colour and order of putting up prayer flags. They do not follow a haphazard order while putting them up. There is a rigid tactics in putting the prayer flags in a right order. Each of the colours has a vivid meaning to preach and the order itself hints at the staunch belief embedded with the prayer flags. 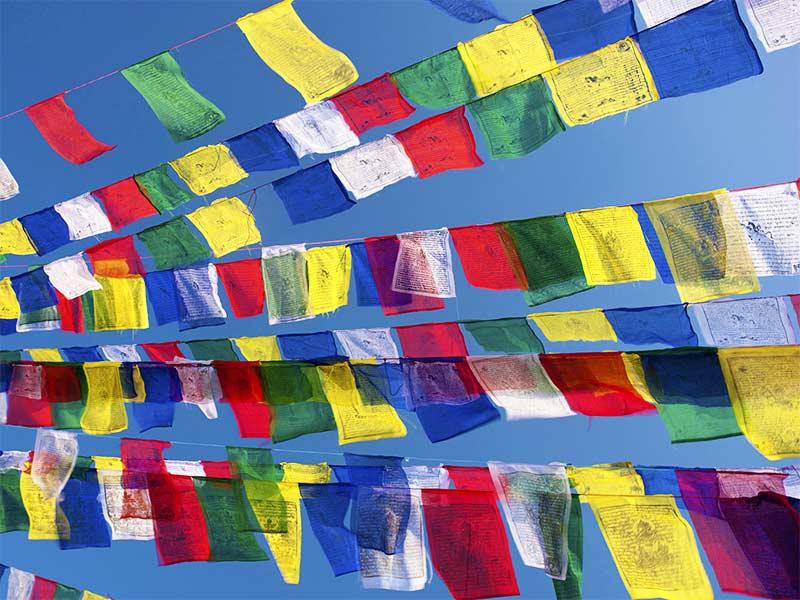 There is a rigid tactics in putting the prayer flags in a right order.

Prayer flags traditionally have five sets, one in each of the five colours. The five colours are assorted from left to right maintaining a particular order. The colours used are blue, white, red, green and yellow. Each of these colours stands for an element of spiritual nature. These represent the Five Pure Lights.

Red symbolizes fire. It gathers life-force to sustain and survive. Green stands for the element of water. This colour is for brotherhood, peace and harmony. Yellow stands for Earth. It symbolizes renunciation. Under meditation, everything on Earth is equal irrespective of differences. The colours used are blue, white, red, green and yellow.

The colours on the prayer flags may also stand for the five wisdom Buddhas – the Akshobhya Buddha, Buddha Vairocana, Buddha Amitabha, Amoghasiddhi and Buddha Ratnasambhava respectively. The five colours or the “Pancha Varna” display how colours can even influence meditative aspirations. Meditating on a particular colour is also associated with Buddha and Tibetan Buddhism.

Symbols, Prayers and Mantras on the Tibetan Buddhist Flags.

The Tibetan Buddhist flags are often inscribed with symbols, prayers and holy mantras on it. The traditional prayer flags mainly have for its centre, the figure of Lung Ta – the powerful wind horse carrying the three flaming jewels (wish fulfilling jewel of enlightenment) on its back. The horse symbolizes speed and good fate. The jewels, however, stand for the three basic aspects of Buddhism – Buddha, Dharma and Sangha. Tibetans believe that depending upon the Lung Ta being high and low, one’s fortune is decided. Therefore, flags with Lung Ta are raised to invoke good fortune in the lives of the folks in the surroundings. The “Tashi Targye” is a group of eight symbols which are often inscribed on Tibetan prayer flags. These symbols include the parasol, treasure vase, the conch shell, golden fish, lotus, the victory banner, the endless knot and dharma wheel. All these symbols have distinct connotations and meanings.

In accompaniment of the Lung Ta, the figures of Four Dignities decorate the four corners of the flag – the sky Dragon, the Garuda, the snow lion and the tiger. The seven possessions of a monarch and the vajra may also form a part of Tibetan prayer flags.

Prayer flags hoisted by a particular person carry his message to the divine. The flag chants a deep rooted prayer for happiness, longevity, good karma and peace for the rest of the survival. It is interesting to note that when colour fades in a Tibetan flag, it is considered a good omen. This stands for the prayers being carried away thereby fading the colours. The photo of hanging prayer flags

The prayer flags are always adorned with hundreds of mantras inscribed on it. The mantras from Padmasambhava, Avalokiteshvara and Manjushri are inscribed in several versions on these flags. Tibetan flags often have a hymn written on it – “Om mani padme hum”. Om is itself holy, “mani” means jewel, “padma” means Lotus and “hum” means enlightenment. Together, it does not declare a congruous meaning but this particular hymn cleanses man of his malicious qualities thereby bestowing him with perseverance, intelligence, wisdom, compassion and renunciation. It is believed that with the wind, these mantras will be blown in the air thus spreading spirituality and goodwill in the place. The prayer flags on the Mount Kailash

These inanimate pieces of cloth seem to be more powerful than human beings. They are hoisted with bundle of hopes and they often serve to provide solace and comfort to the locals.

The prayer flags waving in the wind sprinkle blessings on the folks living here. Since prayer flags have holy mantras and sacred figures written and drawn on it, those are also considered to be holy and treated with utmost reverence. The Tibetans believe that by putting the flags high up in the peaks the Lung Ta will travel to spread good luck to all. The Tibetans keep on adding new flags adjacent to the old ones which is symbolic of how new life takes on the responsibility of old ones. The prayer flags, according to Buddhism, guide one towards the path of attaining Nirvana or Moksha. By putting the flags high up in the peaks the Lung Ta will travel to spread good luck to all.

As the prayer flags are sacred, they should not be used for any other purposes. They should never be kept on the ground, thrown in the dustbin and your feet may never touch the flags. Tibetans believe in burning the old flags so that the smoke carries the blessings with it. 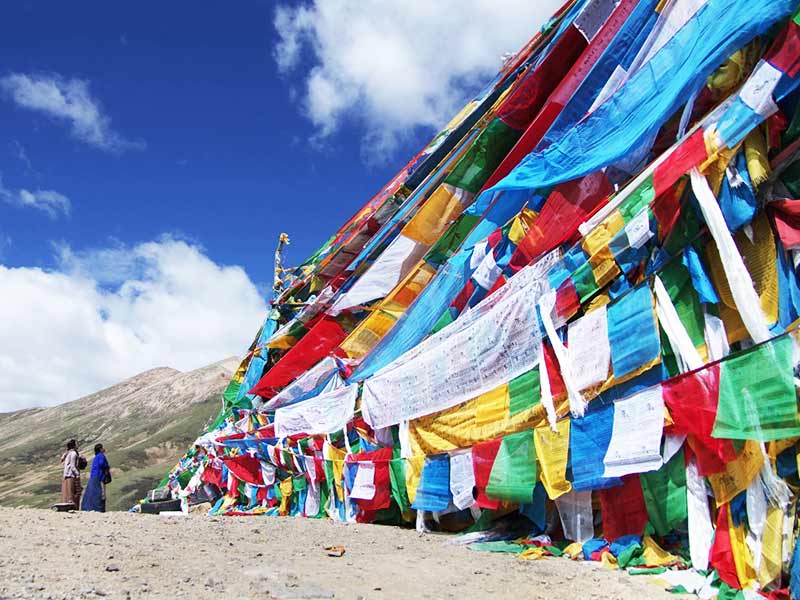 Tibetan locals rest their ordain on a fluttering piece of cloth.

This ritual of respecting prayer flags shows the simplicity of Tibetan locals who rest their ordain on a fluttering piece of cloth. What may just be flags to us, are divine accessories to Tibetan belief system.Therefore, it often happens that even non-believers tend to believe in the spiritual significance of the prayer flags with mantras inscribed on it.

When to Hang and Take down the Prayer Flags in Tibet

The prayer flags are auspicious things so proper time and dates are assigned to hang and take them down. It is believed that if prayer flags are hung on days having a bad omen, they may turn fruitless. In the worst case scenario, the wrong hanging time of a flag may breed ominous results. So, Tibetans generally hoist the prayer flags in the morning. It has to be a day when the sun showers its warm sunshine on the Tibetan mountains. The prayer flags at Namtso Lake

Prayer flags are hoisted keeping in mind the speed of the wind. It is generally a good sign to put the flag up on windy days so that the mantras on these flags get the very first opportunity to roam the air. It is also important that a Lama must bless the flag before hanging it. Special days may also be selected for hanging a prayer flag like during the Tibetan New Year, 7th and 15th day of the 4th lunar month or the 4th day of the 6th lunar month. There are many prayer flags on the mountain pass.

Similarly old flags need to be replaced with the same amount of reverence with which new flags are hung. This ceremony of taking down old flags and replacing them with new ones is carried out once a year during Tibetan New Year. This festival is popularly known as Losar in Tibet. Mostly on the first day of lunisolar Tibetan calendar, this holiday is celebrated. It is on this day Tibetan old flags are taken down. As earlier stated these old flags are burned as a part of the ceremony.

Tibetans consider getting prayer flags as gifts a good sign. It is as if some divine has sent them blessings in the form of the flags. It is hope that becomes the driving force on this earth and these flags hold the hope and aspirations of the Tibetan folks. They know, whatever be the problem is, the flag fluttering in the wind shall rescue them from the inevitable. Therefore whenever you travel Tibet, do not forget to get some prayer flags for those who are back at home.