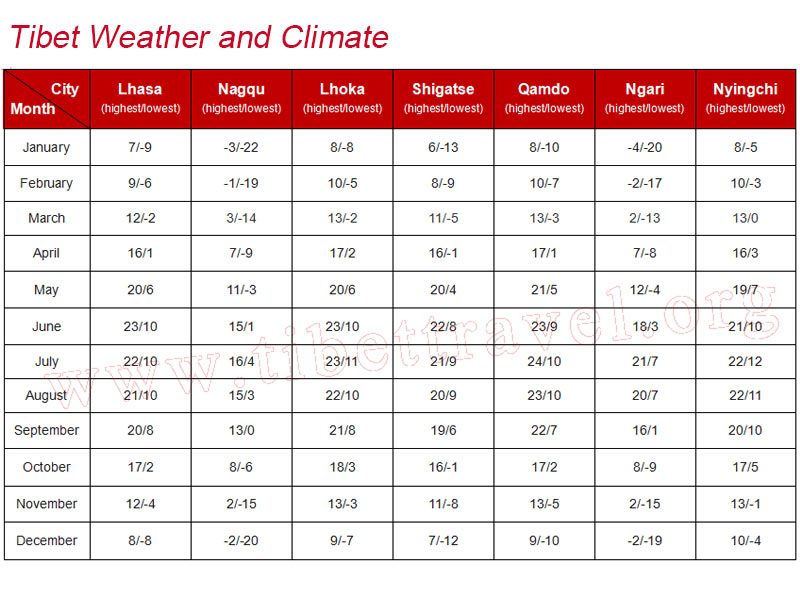 In this Tibet weather chart, you’ll find out the monthly highest and lowest temperature for each prefecture.

Tibet has complex topography and diverse landforms, forming a unique plateau climate. Generally speaking, the north and west parts of Tibet are cold and dry, while the south and east areas tend to be warm and humid. Besides, Tibet has a wild variety of regional climates and distinctive vertical climatic zones. You can even experience four seasons within a single day while touring Tibet. Compared with mainland China, Tibet has thinner air, stronger sunshine, lower temperature and less rainfall. In this post, I’ll talk about Tibet’s seven regional climates and weathers.

With more than 3,000 hours of sunshine annually, Lhasa enjoys great reputation as “the City of Sunshine”. It belongs to semi-arid monsoon climate. With strong winds blowing, Lhasa in winter and spring is relatively dry. And then it turns to be much warmer and moister from March to October. Lhasa summer maximum temperature is about 28 ℃ and its winter minimum temperature is around -14 ℃. However, when the sun comes out, Lhasa daytime temperature will be above 10 ℃ and you can still have warm days in Tibet winter tour.

Having an average altitude of 4,500 meters above the sea level, Northern Tibet Grassland is a typical subfrigid zone climate. It’s chilly, arid, lack of heat and oxygen. Nagchu dry season lasts from November to next March, during which the temperature would drop well below freezing and snow disasters often occur. And then it becomes mild and warm from May to September. The annual rainfalls are mainly concentrated in this period of time. Since the operation of Qinghai-Tibet railway, tourists can catch a glimpse of Northern Tibet Grassland scenery all year around in their Tibet train tour. Meanwhile you are highly recommended to set aside some time for Nagqu Horse Racing Festival.

Lying in the Southern Tibet Valley, Shannan has a typical temperate arid climate. The annual sunshine duration amounts to more than 2,600 hours. Shannan summer is short and cool, but the winter is long and dry. The winter monsoon lasts from December to next March and the rainy season starts from June to September. Since winter is not too cold, you can visit Shannan throughout the year.

With the annual average sunshine time adding up to 3,300 hours, Shigatse weather is mild and sunny. It becomes windy and dry from October to next April. And the rainy season begins from July to August. Actually, it’s suitable to tour Shigatse at four seasons and natural scenery in summer is more vibrant and thriving. But for Mount Everest, I suggest you to trek Everest Base Camp at May and June for the chilly winter (October to next April) has gone and rainy reason (July to August) hasn’t come yet. You are more likely to catch a clear view of Mount Qomolangma. In addition, April to June is also the best time for mountaineering enthusiasts to climb snow mountains nearby.

Chamdo is windy, cold and dry in winter as well as spring, and then turns to be warm and humid in summer. May to September is Chamdo’s rainy season. Luckily, it often rains at night. As a home to high mountains and deep valleys, Qamdo would be closed down by heavy snows from November to next March. And mudslides, landslides, collapses and other geological disasters often strike this area in July and August. Therefore, the best time to visit Chamdo is April, May, June and September. See more at Tibet weather by month

As a famous windy area in the world, Ngari Prefecture has more than 149 windy days every year. The rainy season in Ali also falls from May to September, but the precipitation is much less. Ngari weather is ice-cold and arid. The daily temperature varies greatly within a single day. Even if you take Kailash kora in summer, you still need to wear down coats in the early morning and nightfall. Relatively speaking, July and August are the wettest month in Ali and it’ll be much easier to take awesome pictures for beautiful rainbows. However, the cars are also likely to be trapped in the muddy road. In winter, Xinjiang-Tibet highway will be closed down by the heavy snow in Tibet winter. Therefore, I recommend to trek Mt.Kailash in May, June, September and October.

Known as “Tibetan Jiangnan”and “the Switzerland of Tibet”, weather in Nyingchi is totally different from other regions. Thanks to its lower altitude, Nyingchi has higher oxygen content, abundant precipitation, plenty of sunshine as well as smaller temperature difference between day and night. In summer, the maximum temperature in Nyingchi is about 20 ℃. And it would drop to -3℃ in Nyinghci winter. In general, Nyingchi has a mild and humid climate all year around.

No matter where and when you visit Tibet, you’d better wear sunglasses or hats and apply some sunscreen to protect the skin from the intense ultraviolet. And in the next post, I’ll write something about what to pack for Tibet tour.

What to Pack for Tibet Tour?