These two major routes into Tibet have long been important lifelines for the region, with majority of the goods transported there using these two routes to Lhasa. Formerly parts of the Tea Roads from China to India, they have been popular for travelers to Tibet for centuries. However, while the Qinghai-Tibet Highway is the safest and shortest way to get to Tibet from China, it is one that is rarely used by foreign tourists due to it being far north of the normal tourist destinations in mainland China, whereas Sichuan and Yunnan are popular tourist spots.

Why We Choose to Travel Overland to Tibet?

There are many reasons to travel overland to Tibet, and not the least of which is the astounding scenery that you will drive through on the way there. Both the Yunnan and Sichuan highways to Tibet take one through some of the most spectacular mountain scenery in the world, and give you the chance to see places that very few westerners have visited since they were first seen by the National Geographic explorer Joseph Rock.

Overland trip to Lhasa is an excellent option

The routes from Chengdu and Kunming take travelers up and down mountains on winding roads full of hairpin bends and repeated switchbacks and over high mountain passes where the snows can still be seen even in the summer. You drive past vivid lakes that glimmer in the bright, alpine sun, and through ancient, primeval forests, parts of which have never felt the footprints of men.

Aside from the delightfully awesome scenery, there is the fact that you want to drive overland to Tibet because it is classed by many as an adventure to drive on what is known as one of the most dangerous roads in the world. The route from Chengdu to Lhasa, part of which is also the route from Kunming to Lhasa, is classed as a dangerous road due to the high elevations, the winding tracks that traverse mountainous terrain, and the dangers of mud and rock slides that frequently occur along the route. The same can be said of the stretch of the Yunnan-Tibet Highway that runs from Kunming to Markam. While the road condition is good, with an asphalt surface for its entire length, mud and rock slides are also frequent along its route, and heavy snows often block the high mountain passes making the route very dangerous in winter and in the rainy season of summer. Even for an experienced driver, it is a challenge unlike any other to complete the drive from either Chengdu or Kunming to Lhasa in one piece.

Different Travel Routes to Lhasa from Chengdu and Kunming

A major part of the routes from Kunming and Chengdu to Lhasa is the same, following the G318 from Markam to Lhasa. The roads take different routes to get to Markam, though. The Sichuan-Tibet Highway runs along the G318 national highway from Chengdu, and follows the same road all the way to Lhasa, while the road from Kunming to Tibet follows the G214 national highway north until it meets the G318. From Markam, the G214 continues north to end in Xining, in Qinghai Province, the start of the Qingzang Railway, which runs to Lhasa. 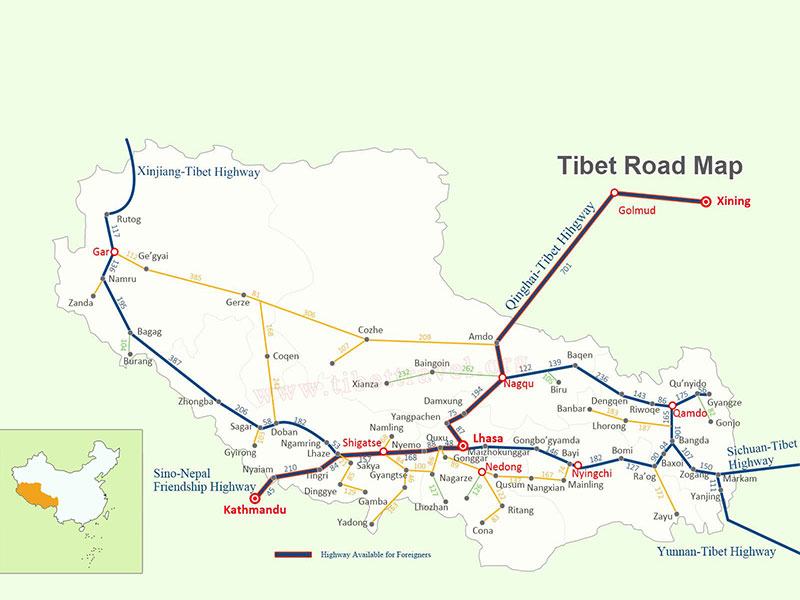 The road conditions on the separate stretches of highway are very different. While the road from Chengdu is the more popular route to take to Lhasa, the road from Kunming is in much better condition, and is paved with good asphalt for the entire length from Kunming to Markam.

From Chengdu, the roads is, initially, well paved, and the conditions are good. However, once you get out of the lowland areas of Sichuan, the road has patches where it is little more than a dirt track. Majority of these dirt roads occur in areas where the road passes through high mountain passes and narrow areas, where the road is also very narrow, often not even enough to allow two cars to pass side-by-side. This makes the road more dangerous to travel on, especially in summer if there has been rain. And even in the dry seasons of the year, the dust can cause poor visibility as well.

The Sichuan-Tibet Highway is also famous for its numerous switchback roads, which swing back and forth along the sides of the mountains, snaking their way to the top of the passes, before descending on the other side in similar fashion. Often featuring bad road conditions and very sharp bends, the hardest of which is known as the 99-bends for its ninety-nine switchbacks as it wends its way up the mountain.

The altitude of the roads are also different in many ways, with the Kunming to Markam portion of the routes being much higher in elevation from the start, than the Chengdu to Markam section as Kunming is at an elevation of 1,892 meters, and Chengdu is at a low altitude of just 500 meters. However, the Kunming road is at a much lower average altitude.

The route from Kunming rises steadily throughout, reaching its highest point at the pass of the Hongla Snow Mountain in the Hengduan Mountain Range, which is 4,300 meters above sea level. With an average elevation above 4,000 meters, the route is a challenging road for any driver. From Chengdu, the road starts relatively low, and only increases in altitude as it reaches almost to Kangding, in Garze. However, from there it starts the long climb up to the Tibetan Plateau, and has an average altitude of over 4,300 meters, with its highest point at the Yela Mountain Pass, which is at an elevation of 4,658 meters.

The mountains of western Yunnan are relatively low in terms of elevation in comparison with those of the Garze Prefecture of Sichuan. And the difference in elevation is more severe in the Garze region as well. Along the road from Kunming, the scenery is beautiful, with stunning snow mountains and gorgeous alpine valleys covered in ancient forests. As it winds its way north through the Hengduan Mountains, the scenery is continuous and constant all the way to Deqen County.

The route from Chengdu has a very different landscape as it passes through Garze to Markam, with deep green valleys that are almost tropical in climate to the heights of the snow mountains, some of which reach more than 6,000 meters. In one day, you can travel along roads that are surrounded by primeval forests, and that follow bubbling rivers along the valley floor to high alpine mountain passes which look out over the landscape with the most spectacular views.

The cultures along these two routes are also different, although they both have Tibetan people that are the predominant cultures in the areas. In Yunnan, the majority of the Tibetan people are found in the Diqing Tibetan Autonomous Prefecture, and are predominantly of the Nakhi ethnic group, which are descended from the Tibetan Qiang people. While they share their heritage with the local Mosuo ethnic group, the Nakhi are more influenced by Han Chinese culture, whereas the Mosuo retain more of their Tibetan heritage and culture. The main difference of these two ethnic groups from those of western Sichuan is the matriarchal family practices that are predominant within the cultures.

There are many Tibetan style sites along the Sichuan-Tibet Highway

While there may be more accommodation and places to eat on the road from Chengdu to Markam, the accommodation for foreign tourists is very similar. Hotels and lodges for the major form of accommodation along both roads, while the smaller, locally-used lodges and truck-stops are restricted from having foreign travelers stay.

Overall, there is not that much difference in cost for Tibet overland tour from Chengdu and Tibet overland tour from Kunming, as both need to be organized tours booked with a registered travel agent that provides touring services in Tibet. As foreign tourists are not permitted to travel alone in Tibet, the tours will both require a private vehicle and guide for the duration of the tour. With both routes being a little over 2,000 kilometers in length, even the cost of driving is similar, although costs on both routes can be reduced by traveling as a group.

Which One Shall I Choose National Highway G318 or G214 to Tibet?

Both routes to Tibet have their good points, though there are few bad points on both routes. While the road from Kunming to Markam is in better condition than from Chengdu to Markam, once they join on the G318, there are still some poor conditions on the rest of the route. Both routes have some of the most spectacular scenery you could imagine, and though the landscapes differ, they are both worth the drive to view. Ultimately, the choice is yours, and at Tibet Vista, we are ready to help you make that choice easier.

How to Plan an Overland Trip to Sichuan, Tibet, and Nepal?

Qinghai Tibet Routes: How to Get to Lhasa from Xining by Railway, Highway or Flight