Why Golmud to Lhasa Cycling Tour is Very Popular among Chinese Tourists?

Riding a bike from Golmud to Lhasa along Qinghai-Tibet Highway, the Xining to Lhasa section of the G109 National Highway, is a very popular way for the local Chinese tourists to get to the ancient Tibetan capital. Cycling along the Qinghai-Tibet Highway, the vast open road that connects Tibet with mainland China to the northeast, is an epic adventure that takes around 18 days to complete. You can see cyclists on this route to Tibet all year around, even in the cold winter months. And the reasons people decide to take on this arduous ride? Well, there are plenty of reasons to choose from.

Golmud is the location in Qinghai Province where the road to Tibet starts its slow climb up to the Tibetan plateau. Rising from 2,809 meters above sea level to more than 5,000 meters at the highest point of the road, the Golmud to Lhasa section of Qinghai-Tibet Highway runs for 1,157 kilometers along one of the world’s highest roads. With an average altitude of around 4,500 meters along the entire highway, the road heads south-west as it crosses the vast Tibetan plateau to reach the world’s highest capital city, Lhasa.

The route from Xining to Lhasa has long been a popular route to Tibet for tourists on the train. The unique trip takes you along the Qinghai-Tibet Railway to Lhasa and gives you an awesome view of the scenery of Qinghai Province and northern Tibet. The road and railway follow roughly the same route, and you can see all of the amazing sights that train passengers get to see, without the glass in between.

The stunning view along the road from Golmud to Lhasa attracts lots of cyclers all the year around.

After departing from Golmud and climbing up to the plateau, you get to cross the amazing Kekexili National Nature Reserve, one of the most amazing wildlife conservation areas in the world. Uninhabited by people, it is home to some of Tibet’s many indigenous species of animals and birds. Wild kiang (asses or donkeys) run across the grasslands, while the wild yaks of northern Tibet graze peacefully. And this is one of the most common places in Tibet to see the rare Tibetan antelope, as the herds follow their traditional migration routes across the plateau.

Further south, you will cross the vast Qiangtang Grassland, the largest area of open prairie in Tibet, stretching from east to west across the north of the region. The grasslands are also home to many of Tibet’s wild animals, including kiang, yaks, and antelopes. It is also a region of Tibet inhabited by local Tibetan nomadic herders. So if you are interested in the ancient Tibetan culture, there is no better way to learn more about it than from the nomads of the northern plains.

One of the advantages of cycling along the route, instead of taking the train, is the ability to stop wherever you want. Northern Tibet and southwest Qinghai Province are filled with amazing attractions that are mostly inaccessible if you travel to Lhasa by flight or Tibet train. Only by taking the road route to the plateau capital can you truly experience these amazing attractions. These include the famous Fenghuoshan (Fenghuo Mountain), the location of the highest railway tunnel in the world, and the stunning Tuotuo River valley. You will pass through the Kunlun Mountain Gate.

You can stop to take photos at the high mountain passes of Kunlun Mountain Pass and the famous Tanggula Mountain Pass, the highest road pass in the world at 5,231 meters above sea level. And the Tanggula Pass is the line where you cross from Qinghai Province into the TAR.

Lifestyles in the north of the TAR are more nomadic in nature, as the people are generally yak and sheep herders that spend most of their lives on the grasslands of the north. As you move further south, the nomadic lifestyle changes to more villages with crops, and then to the city lifestyle of the people of Lhasa. The difference is staggering, and you will be amazed at the changes you can see during you cycling.

View the Wild Animals of the Plateau

The grasslands of the plateau are home to a huge number of wild animals, and cycling across the plateau to Lhasa is one way to get up-close and personal with many of the indigenous species of Tibet. The wild kiang and wild yaks roam the prairies of the plateau in herds, and this is one of the few places in the world where you can still see wild yaks wandering and grazing in peace. The domesticated version of this animal is very different nowadays from its origins. 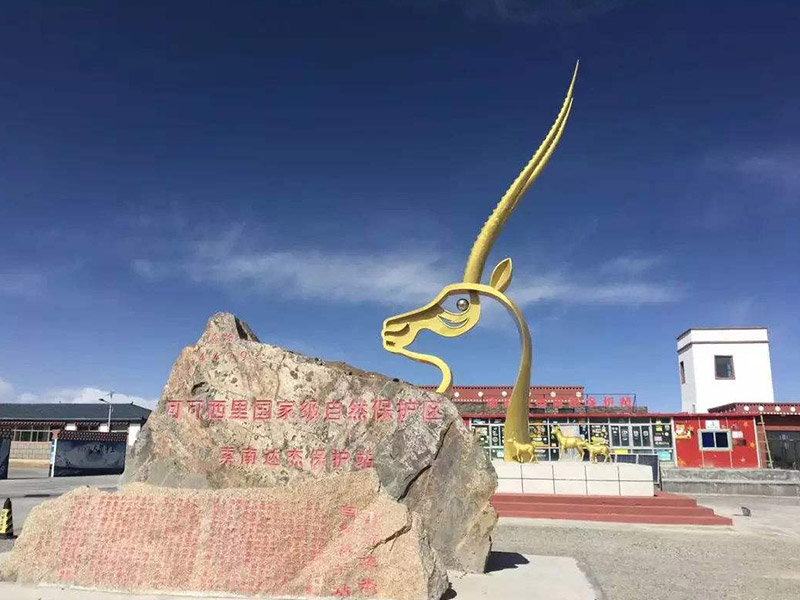 The plains are also home to one of the rarest species of antelopes on the planet, the Tibetan Antelope, or Chiru. Native to the plateau, they inhabit the higher areas above 3,500 meters, and majority can be found in the Changtang Nature reserve area in northern Tibet. And if you are lucky, you may even get to see the smaller Tibetan Gazelle, or Goa, which can be found all across the plains of the northern plateau region.

It is Safe to Cycle this Route

Though this road route has an average altitude of over 4,500 meters, and runs across a mountain pass as high as 5,231 meters, it is a safe route, as long as you are careful. There is no really sharp altitude change along the route, and the ascent is generally pretty gradual, making it easier to stop and acclimatize along the way. The climb up to the Tanggula Pass, on the boundary between the TAR and Qinghai Province, can be tough but still manageable. 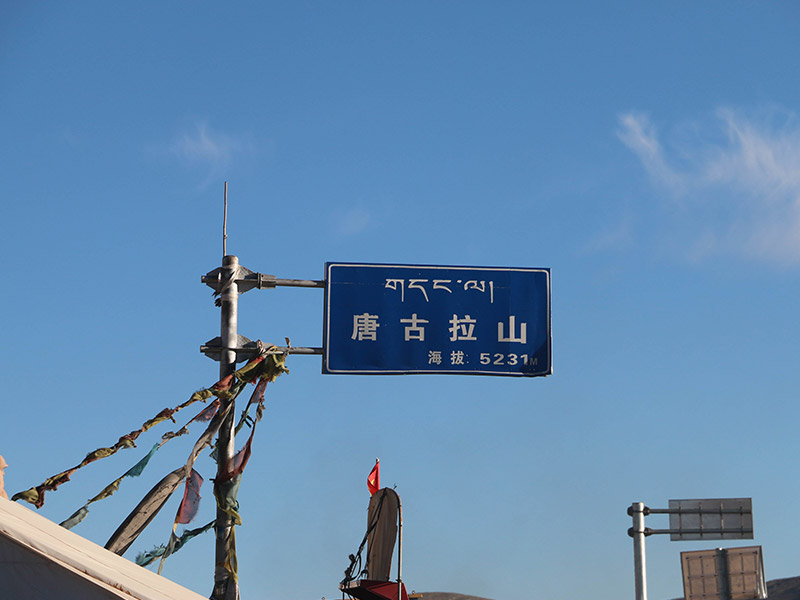 With an altitude of 5,231m, Tanggula Pass is the highest point of Qinghai-Tibet Highway.

And the road is paved with asphalt for its entire length, making your cycling smooth and comfortable, even if a little energetic at times. And with a careful planning, you can easily make this trip to Lhasa from Golmud without suffering from severe altitude sickness. And with a wide range of small villages and communities along the road, as well as roadside stops and eating houses, there is plenty of opportunity for sustenance and replenishment of your stores along the route.

Visit the Namtso Lake on the Way to Lhasa

One of the main advantages of taking this cycling tour from Golmud to Lhasa and means of transport to Tibet is the chance to make a slight detour to visit the Namtso Lake along the way. Lying just on the other side of the range of the Nyenchen Tanglha Mountains around 240km north of Lhasa, Lake Namtso is the perfect side-trip for this epic adventure. The largest salt water lake in TAR and the highest lake in Tibet, this beautiful body of water is one of the most popular tourist attractions in northern Lhasa and visited by thousands of people every year. 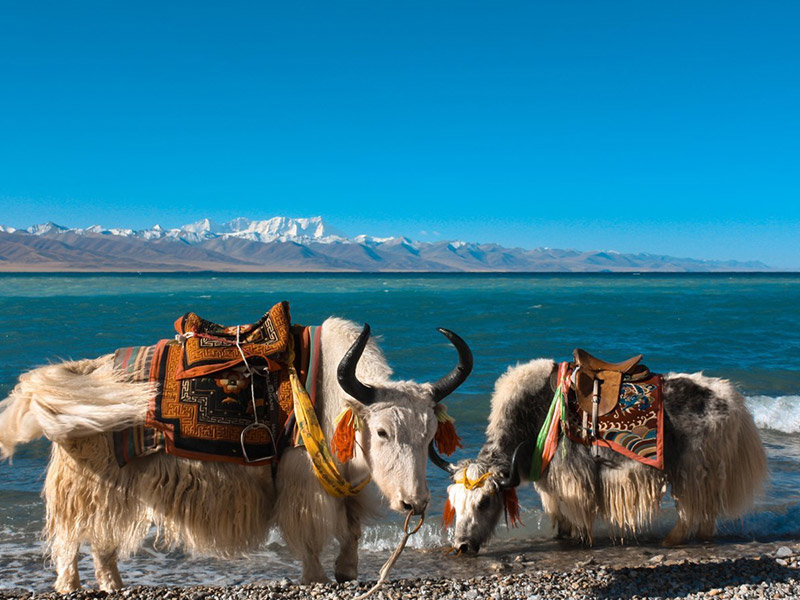 You can make a detour to the holy Namtso Lake on the cycling tour from Golmud to Lhasa.

You can take the detour from Nagqu, to cross the high Nagenla Pass, at around 5,180 meters. Not only do you get to see the beauty of this sacred lake, but you can also explore the Tashi Dor Peninsula, and get some great views of Mount Nyenchen Tanghla around the lakeshore.

So why take a cycling tour to Lhasa from Golmud? Because it is the best way to explore the northern area of the plateau without being behind the glass windows of a train. Because you have the chance to see many of the plateau’s amazing wild animals, several of which you cannot find elsewhere in the world. Because you can understand more about the unique Tibetan culture and how the lives of the people change as you travel south across the plateau is well worth the trip. And because it is there, so why not? Chaka Salt Lake, Fairyland in Qinghai, has Reopened to the Public→ 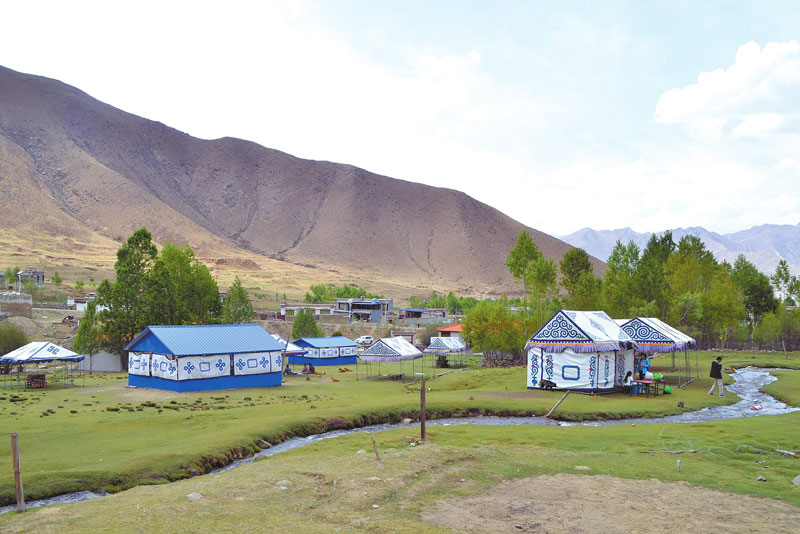 How to Use Your Cellphone and Internet When Traveling in Tibet

Is It Worth Visiting Ruins of Guge Kingdom?

0 Comment ON "Why Golmud to Lhasa Cycling Tour is Very Popular among Chinese Tourists?"