Is It Worth Visiting Ruins of Guge Kingdom?

Guge Kingdom is an ancient and prosperous kingdom set up in the far northwest of Tibet in the 10th century. The ruins of Guge Kingdom lies in the area of what is now known as Zanda County in Ngari Prefecture of TAR. Guge Kingdom was founded in around 912 AD by Kyidé Nyima Gön, the great grandson of the Tibetan king Langdarma with its capital in Purang, more than 1,500 kilometers from Lhasa. This ancient kingdom lasted for more than 600 years and possessed glorious civilization. However, it disappeared into the dust almost overnight in the 17th century, leaving an unsolved puzzle for researchers and historians. Is it worth visiting ruins of Guge Kingdom so far away from Lhasa? The answer is absolutely yes.

Guge Kingdom was the spiritual and cultural heart of Tibetan Buddhism.

After the fall of the Tibetan Empire, following the death of the Tibetan king, Langdarma in 841 AD, turmoil reigned in the empire. The anti-Buddhist king had banned Buddhism in favor of the earlier Bon religion in Tibet, and after his death at the hands of a Buddhist monk assassin, civil war ensued throughout the kingdom. The empire was split by the time of his great grandson, Kyidé Nyima Gön, who took 300 men and marched into the hinterlands of the northwest, to the lands of the former Zhangzhung Kingdom, birthplace of the Bon religion. Here, he established his capital at Purang, and went on to conquered huge areas of Ladakh, including large tracts of the Spiti Valley.

It was the son of Kyidé Nyima Gön, Yeshe-Ö, who revitalized the banned Buddhist religion in Tibet. After the death of Kyidé Nyima Gön, the land was split between his three sons, and the separate kingdoms of Maryul, Guge-Purang, and Zanskar were formed. Guge-Purang was the kingdom of Yeshe-Ö, who built the first Buddhist monastery there in Tholing, his capital. The new monastery at Tholing became an important center for scholars from India, invited to the monastery by the king to spread the Buddhism in Tibet, in this small corner of the plateau.

Yeshe-Ö was more than just a king, being a monk as well, and was the first notable lama-king in Tibet. Guge was ruled by him as a theocracy, and it is his work on the propagation of Buddhism in Tibet that led to what is known as the “second diffusion” of Buddhism in the region. He is also responsible for the studies in Kashmir of the famous Rinchen Zangpo, who translated the Buddhist scriptures from their original Sanskrit to ancient Tibetan. The ancient Guge kingdom, with its monasteries of Tholing, Tabo (in Ladakh), and Khochar, was the precursor for the re-establishment of Buddhism in Tibet. During the reign of the following kings in Guge, Buddhism expanded across the plateau once more, and with the help of such masters as Atisha, the Bengali sage who spent three years with Yeshe-Ö at Tholing, the religion once again came to dominate on the plateau. By the time of the Yuan Dynasty’s rule over Tibet in the 13th century, Tibetan Buddhism had once again grown to cover the entire plateau region.

The Scenery of Guge Kingdom ruins is awestruck.

Over a thousand years since the founding of the Guge Kingdom, the stunning royal palace at Tsaparang is now in ruins. Tsaparang was built on a spur of rock that looked out over the Garuda Valley, part of the upper reaches of the Sutlej River. Rising more than 300 meters from the valley floor, the city was carved mostly from the rock itself, with the people living in the village at the base of the spur. 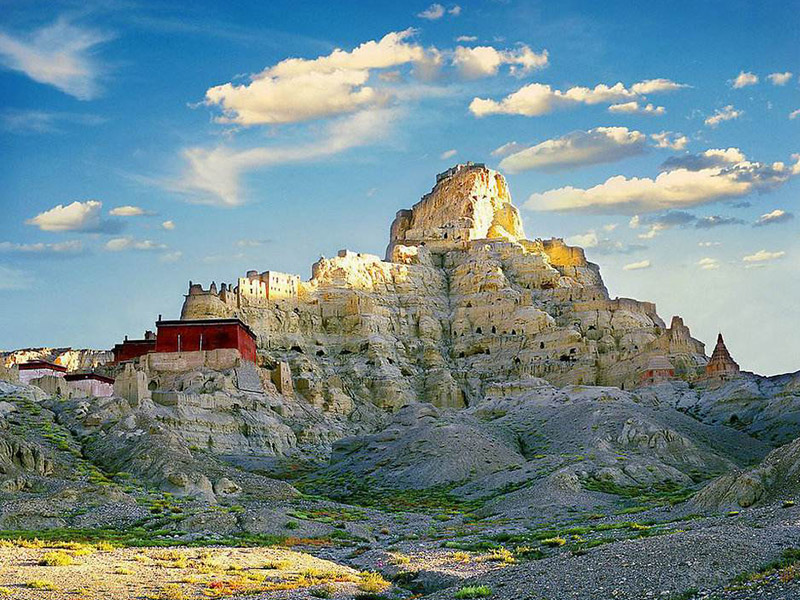 You can enjoy a panoramic view of the valley when standing on the top of the Guge Palace.

Above the village, two public temples were built, partly from mud-bricks with the lower parts carved out of the rock. The monastery was known as the Lhakhang Marpo (Red Chapel) and Lhakhang Karpo (White Chapel), and included quarters for the monks. Above this, a tunnel staircase wound up into the royal quarters, carved from the rock of the spur, with the stunning summer palace set on the top of the rock formation, looking down on the people that Yeshe-Ö ruled.

As you gaze at the structures of the city, you can see the caves carved out of the rock for homes, with the houses and buildings piled one on top of the other above, spreading out to both sides of the main spur. The ancient site has also produced some amazing relics, both religious and historical. From small statues and frescoes that have miraculously survived the thousand years from the birth of the kingdom to the tools, clothes, decorations, and even mummified bodies, all were preserved by the cold dry air of the plateau. Our clients enjoying their trip at Tholing Monastery.

Tholing Monastery: The oldest monastery in western Tibet, Tholing Monastery lies in Zanda County, and was built in 997 by the Guge King, Yeshe-Ö, as part of this revival of Buddhism in Tibet. The monastery, which translates to “hovering in the sky forever”, lies at an altitude of 3,800 meters, possibly making the name a reference to its altitude and location. The complex is made up of three sections, the Yeshe-Ö Temple, the Lhakhang Karpo, and the Dukhang, all of which still contain a variety of well-preserved frescoes. 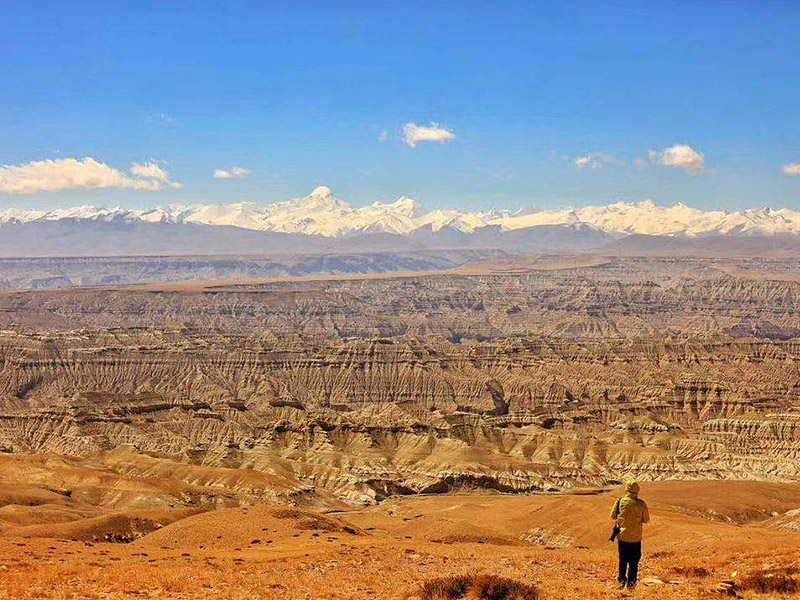 If weather and time permits, you can admire the golden sunset of Zanda Earth Forest.

Zanda Earth Forest: Located along the river of Langqen Zangbo in Zanda County, the Zanda Earth Forest is a huge area of tertiary strata earth forest that is considered to be the largest in the world. Formed by the movement of the Himalayas and the water erosion of millions of years, the forest is famed for its unique shapes, with some formations resembling castles, watchtowers, and even Buddhist pagodas. Desolate and magnificent, walking among the formations is the experience of a lifetime. 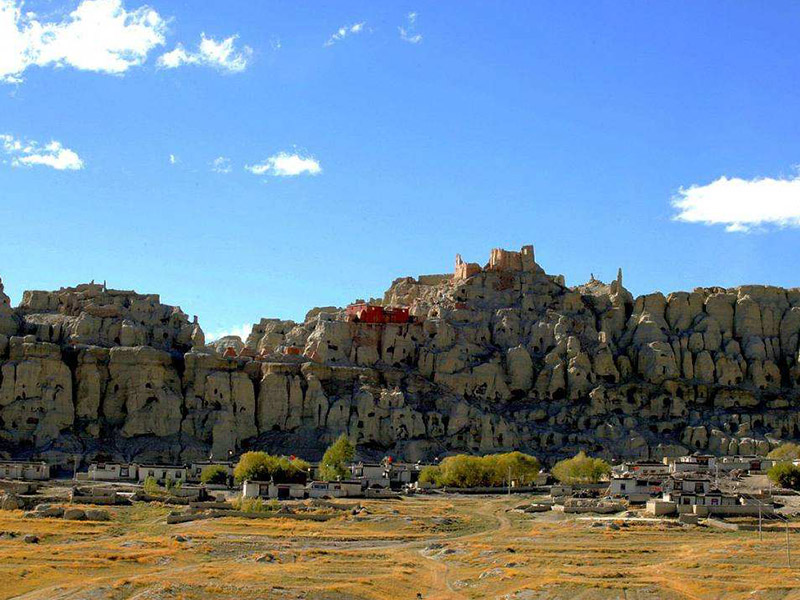 Inside the caves of Donkar and Piyang, you can see well-preserved exquisite grottoes.

Donkar and Piyang Grottoes: Located in Zanda County, Donkar and Piyang Grottoes is cave murals site that dates back around 1,100 years to the time of the earliest years of the ancient Guge Kingdom. The caves at Donkar, the village in the main part of the valley, are three of the most well-preserved grottoes in China, with artworks reminiscent of the Silk Road cave murals at Dunhuang. In Piyang Village, a few kilometers away, there lie two spectacular caves with some of the finest murals.

It is convenient to visit Guge Kingdom.

For those interested in taking a trip to the Guge Kingdom in Ngari, the best way is to take our 17-day Guge Kingdom tour which visits Yamdrok Lake, Tashilunpo Monastery, EBC, Mount Kailash along the way. One of the best options for reaching this area of Tibet, this tour makes it convenient and economically viable for a number of reasons. The sacred Mt. Kailash has attracted tourists all over the world.

Firstly, the tour is an extension of our 15-day Mount Kailash Kora tour, and you only need 2 more days to visit the lost Guge Kingdom which is about 250km away from Mt. Kailash. By using this method, you don’t need to fly to Ngari and then drive to Zanda County. Secondly, as Mt. Kailash trek finishes around lunchtime, you spend the rest of the day in the car to Zanda and get a good night’s rest at comfortable hotels in Zanda County before exploring the ancient Guge Kingdom.

So, is it quite worth visiting the Guge Kingdom. The ancient Guge Kingdom is not just an awesome example of the ruins of an empire, but is the place where Buddhism was reborn in Tibet, and an important part of Tibetan history. It is still an interesting tale of a kingdom that vanished overnight. Its repatriated inhabitants gone, leaving homes, tools, and personal possessions behind, along headless mummified remains lying on the cave floors, one wonders what happened to the population of this long-standing kingdom. Plus the great natural and religious attractions around it, the Guge Kingdom trip is worth very cent of it.

Why Golmud to Lhasa Cycling Tour is Very Popular among Chinese Tourists?

Why You Need Two Days to Cross Gyirong Port from Kathmandu?

0 Comment ON "Is It Worth Visiting Ruins of Guge Kingdom?"