Tibet is a high-altitude region of the People’s Republic of China, known as the Tibet Autonomous Region, and lies on the world’s highest plateau in western China. Fringed by the mighty Himalayas, this isolated land was unvisited by foreign tourists for centuries, and it was not until the 1980s that international travelers were first able to enter Tibet for holidays. Now, all travelers to Tibet from outside China must be on an organized pre-arranged tour with a registered Tibet tour operator or travel agency, as independent travel is not permitted in Tibet.

Touring on the Tibetan plateau, despite the need for tour guides and organized tours, has increased in popularity over the last decade to make Tibet one of the tourism hotspots of Southeast Asia. All tours to Tibet are priced to include a wide range of items, such as the cost of the travel between locations on the plateau, the cost of the tour guides and drivers, the cost of entrance to attractions and the permits required in order to enter and travel in Tibet, and often the cost of the hotel you will stay in. With such a huge amount of items included in the standard tour of Tibet, the cost of the trip to this high-altitude plateau land of Buddhist temples and mountains is well worth it.

How much your tour of Tibet will cost often largely depends on the time of year in which you will travel to the region. Despite what some may say or believe, Tibet is a land that can be visited all year round, with the exception of the time of the Tibetan New Year, when the region can be closed to international tourists.

June is a perfest to have a trekking tour at the roof of the world.

Summer, from June to September, is the most expensive time of year, as this is the peak period for Tibetan tourism, and the time when the plateau region is at its busiest. Summer is a common time of year to travel to Tibet for both international and domestic tourists, which makes the cost of a tour in Tibet higher due to the increased demand.

Spring and autumn, from April to May and October to November, are known as the shoulder seasons in Tibetan tourism, and as such, are not as expensive as the peak season. However, they are popular times for trekkers in Tibet, and this can often be the most expensive time of year for Tibet trekking tours, since the summer is the monsoon period on the plateau.

Winter, which runs from December through March, is the low season for Tibetan tourism, and thus the lowest priced time of year to travel to the plateau. While the plateau can be visited at any time of the year, in the winter, it can often be too cold in some areas of the region, making travel to the more remote northwestern areas almost impossible in the depths of winter. With fewer tourists entering the region and lots of hotels to choose from, the cost of many of the expenses of a tour in Tibet winter can be hugely discounted during the winter months. However, you may find that the period of Losar (Tibetan New Year), if the plateau region is open to international travelers, will be very busy, with a lot of domestic tourists and local travelers.

While it is normally included in the overall cost of the tour with the travel agency, the Tibet Travel Permit, which is required to enter Tibet and travel in the area of Lhasa, does actually cost money to obtain. The permit is also required to board the flight or train to Tibet, and can only be applied for by the travel agency once you have booked the tour. For Tibet Vista’s clients, we promise you a 100% guarantee of Tibet Travel Permit and the consultancy and application service for free. 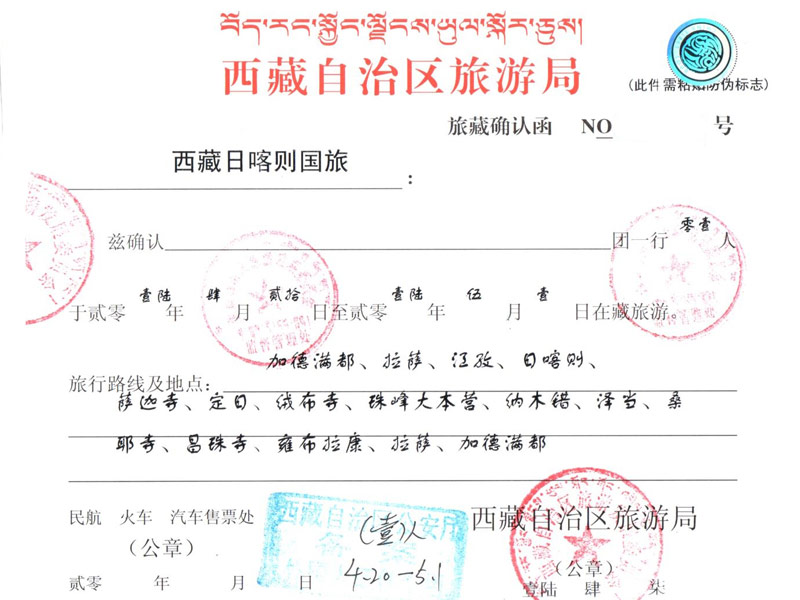 Tibet Travel Permit is essential for your Tibet travel.

While you are normally responsible for obtaining and paying for the visa to enter China prior to booking your tour, travelers entering Tibet from Nepal are required to have a different visa for their trip to Tibet. Known as the Chinese Group Visa, it can only be applied for in Kathmandu by the tour operator, and requires your original passport in order for the application to be processed. The cost of this visa from Nepal ranges from around US$177 for US citizens to as low as US$85 for other nationalities. The cost depends on your home country. This cost will need to be paid by you once you reach Kathmandu for the processing of the visa. Please ask your travel consultant for the exact visa cost for your nationality.

Cost for Different Ways to Tibet

Traveling by rail to Tibet is one of the best ways to reach the plateau, and while it does take from 22-55 hours to reach Lhasa, it is well worth the time is taken for the amazing views you get from the trains as they travel down across the plateau. Taking the famous Qinghai Tibet Railway to visit Tibet is an excellent experience for you.

The table of ticket prices below is correct for 2019 at the start of the season, and is based on the low-season prices. These prices may vary depending on the season.

Flights to Tibet depart from more than two dozen airports across Tibet, as well as from Kathmandu in Nepal, the only international flights to Tibet. Flights from Nepal to Tibet, which take just 90 minutes to cross the plateau to Lhasa, cost from around 283 US dollars at the start of the tourist season in April, and can rise to around 600 US dollars per person by the peak months from August to early October. In the low season, ticket prices range from around 233 dollars to 263 dollars per person, depending on the month in which you are traveling.

Flights from mainland China range in price depending on your departure airport, and are much more costly than even the most expensive soft sleeper tickets on the trains from the same location. Flights from Chengdu, Chongqing, and Kunming can cost a lot less than those from Shanghai and Beijing, and can rise in the peak seasons and fall in the low seasons. If you are considering flying, you can try and get some cheaper flight from some of the new Chinese budget airlines, such as Spring Airlines, 9 Air, China United Airlines, and Ruili Airlines, as well as a few others. You can check the websites and comparison flights for the latest prices.

On all of our Tibet tours, the cost of the entrance fees for the attractions you will be visiting on the tour is included in the overall cost of the tour. Attractions in Tibet are normally required to be paid in advance to obtain the tickets for entrance, so these costs are included in the overall price, as it would be unwise to risk trying to buy the tickets once you are already in Lhasa due to demand. Ticket prices on some attractions do fluctuate depending on the season. A few examples of the cost of the attraction tickets include:
Potala Palace 200 CNY (29.00 USD)
Jokhang Temple 50 CNY (7.30 USD)/85 CNY (12.30 USD)
Palcho Monastery 60 CNY (8.70 USD)
Tashilhunpo Monastery 100 CNY (15.00 USD)
Rongbuk Monastery 30 CNY (4.40 USD)
Everest Base Camp 90 CNY (13.10 USD) /180 CNY (26.10 USD)

The cost of the Tibetan tour guide that will travel with you on your tour depends on a number of factors, including the length of the tour, the type of tour you are taking (small group or private tours), the season you are traveling in, and any additional activities you may be taking on while you are in Tibet. Additional activities include trekking, cycling, etc., and require different types of guides and support staff. For a better idea of the overall cost, please contact our travel consultant.

Accommodation in Tibet can be in a wide variety of experiences, from luxury hotels in Lhasa and Shigatse to a yak-hair tent at the Everest Base Camp. Life here on the plateau is different from anything you have ever known, and can cater to all sizes of wallets. For budget accommodation in the cities, you can expect to pay around 15-30 dollars per night for a 3-star hotel, and a lot less for a budget guesthouse.

Food is actually rather expensive in the remoter areas of Tibet, while in the cities it can be a little less costly. In the cities, you can expect to pay around 2-5 dollars for a simple Tibetan meal consisting of noodle soup, momos, dried yak meat, and tea or local Lhasa beer. At higher-end restaurants in Lhasa, you can expect to pay around 6-10 dollars for a wider range of Tibetan, Nepali, Sichuan, and western cuisines. Outside the cities, however, food is harder to come by, and many things that are taken for granted, such as vegetables and breads, are more costly to ship to the remote areas. Meals are often simpler for around the same prices as in Lhasa, with fewer vegetables and fewer choices. On average, you should expect to pay between $5 and $20 per day for food.

Other Personal Cost in Tibet

Aside from all of the expenses of the tour, there are also the personal costs that you need to consider for your tour of Tibet. These include such things as souvenirs, medicines, porter services for trekking tours (which are not part of the included costs), and general costs for personal items and shopping, or for hotel upgrades, etc. It is advisable to carry enough money for these personal expenses for the duration of your trip. On average, we find that an amount between $120 and $220 normally covers it, but it is up to you.

How to Minimize the Cost of Tibet tour?

If you are looking for ways to reduce the cost of your tour of Tibet, then there are ways to bring down the expenses, to make it friendlier to your wallet. One of the main ways to reduce the cost of the tour is to join a Small Group Tour, which means traveling with other people on the same tour type. Our Small Group Tours are open all year round, and depart on set dates, with other like-minded travelers as your travel companions. Join in a small group tour is a great way to make friends during your journey.

Traveling with a group of family or friends can also reduce the cost of your tour, as you can all share some of the costs of the trip, such as driver, guide, and vehicle, and the tops for each. If you are planning a trip to Tibet and want to reduce costs, travel with some friends from home and make it cheaper for all of you together.

The overall cost of a tour in Tibet can vary depending on a huge number of factors, from where you depart for Tibet and how you get there to when you decide to travel and how you want your tour to be. With the breakdown of costs that we have given here, you can better plan your trip, as well as knowing where you can cut the cost and save money by making some good thrifty choices.

How to Plan Kathmandu to Lhasa Tour by Road

0 Comment ON "Cost to Travel Tibet: A Budget Breakdown of Tibet Tour Costs"