Check how our clients are enjoying their Tibet trip
Home>Tibet Vista Blog>Nyingchi Mainling Airport: Another Great Alternative to Fly to Tibet

The first reason to choose Nyingchi Mainling Airport is that it is the lowest airport (at 2949 meters above the sea level) among all the Tibet airports (Lhasa Airport at 3570 meters; Shigatse Peace Airport at 3782 meters; Ngari Gunsa Airport at 4274 meters). For those who are concerned about the altitude sickness, it is suggested to arrive in Tibet at a lower place to get used to the altitude of the plateau. During the trip from Nyingchi to Lhasa, the altitude will rise up from around 2000 meters to 3650 meters gradually, and the high oxygen levels of Nyingchi will reduce the effect of high altitude. So there is no need to be afraid of altitude sickness, especially for young and old travelers, to fly to Tibet at Nyingchi Mainling Airport and start their Tibet tour from the lower eastern Tibet. 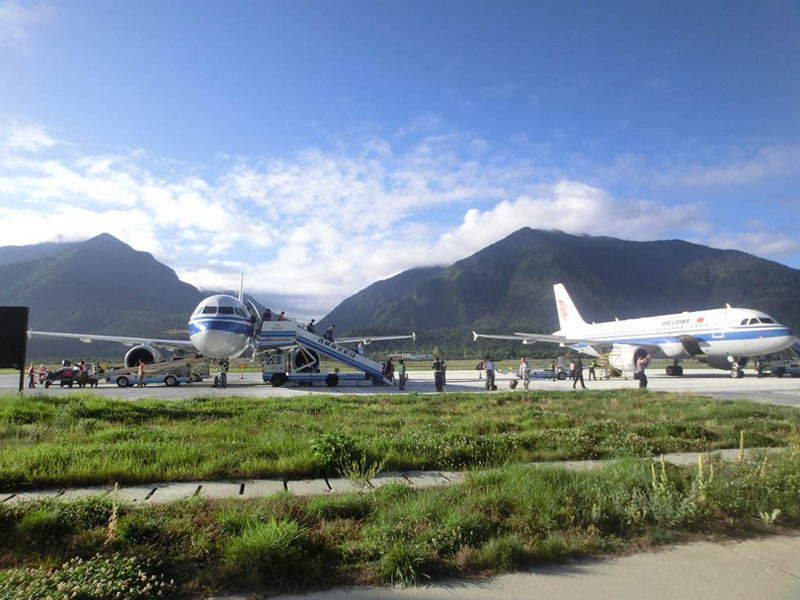 A Viable Option in the High Season of Tibet Travel

Flying to Nyingchi Mainland Airport is also an alternative option for those who cannot get a flight ticket to Lhasa in high seasons, especially in summer holidays and the first week of October (the National Holiday of China).

Every year, there are millions of tourists coming to Tibet from mainland China and the rest of the world. Since the best time to visit Tibet is from April to October, most tourists travel to Tibet in these months. And in the summer holidays of July and August, there are many Chinese travelers coming to Tibet, too. So there may be a shortage of air tickets to Lhasa Gonggar airport. In this situation, you can make a plan B to get to Tibet from Nyingchi.

Enjoy the Stunning View of Nyingchi Before Heading to Lhasa

Different from other regions of Tibet Plateau, Nyingchi, in the southeast of Tibet, offers unique landscapes of forests and rivers that you cannot see in other regions of Tibet. Rough Rivers, snow-capped mountains, dense forests, and crystal lakes… the scene of Nyiching is evergreen and makes you feel refresh. Praised as “the Switzerland in Eastern Tibet“, Nyingchi is also a wonderful destination for those who are keen on natural beauty and photography tours in Tibet. You can travel along the last section of Sichuan Tibet Highway from Nyingchi to Lhasa, visiting the stunning Batsom Lake and Ranwu Lake. If you are lucky, you may have the chance to see the peak of Namcha Barwa. 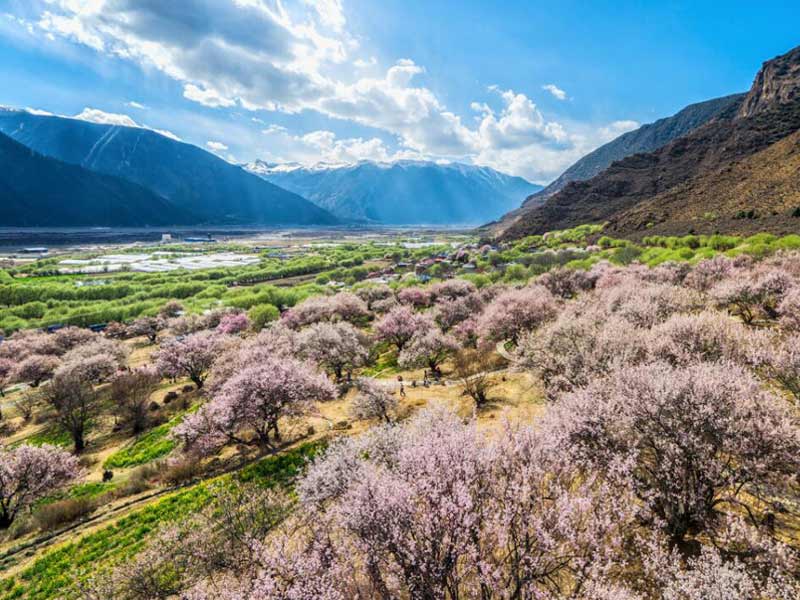 Enchanting valley of Nyingchi was blanketed by rosy peach blossom in spring.

At 2949 meters above the sea level, Nyingchi Mainling Airport is the lowest airport among all the airports in Tibet. That’s why it is one of the popular airports for travelers coming to Tibet.

Located in the Yaluzangpo River Valley, Nyingchi Mainling Airpot is 18 kilometers from Milin county and 52 kilometers from Nyingchi City. It takes 50 minutes from the airport to Nyingchi City. And to the Bayi town, where the famous Yarlung Tsangpo Grand Canyon is, it takes 2.5 hours from Nyingchi Mainling Airport by car. The distance from Nyingchi airport to Lhasa city is about 450 kilometers. However, no travelers get to Lhasa immediately when they arrive in Nyingchi. A few days trip in Nyingchi before heading to Lhasa is highly recommended, during which you cannot have enough time to get acclimatized to high altitude in Tibet plateau, but also enjoy the unique natural beauty of eastern Tibet.

Surrounded by mountains over 4000 meters, Nyingchi Mainling Airport is said to be the most difficult airport for planes to reach in the world. But it doesn’t mean that it is unreachable. Recently, there are scheduled flights to Nyingchi Mainling Airport from Chengdu, Chongqing, Xi’an and so on. Most of the flights are operated by Air China and Sichuan Airlines. Among all the cities that offering flights to Nyingchi, Chengdu has the most frequent flights to go. Also, there are flights from Nyingchi to Lhasa every day. 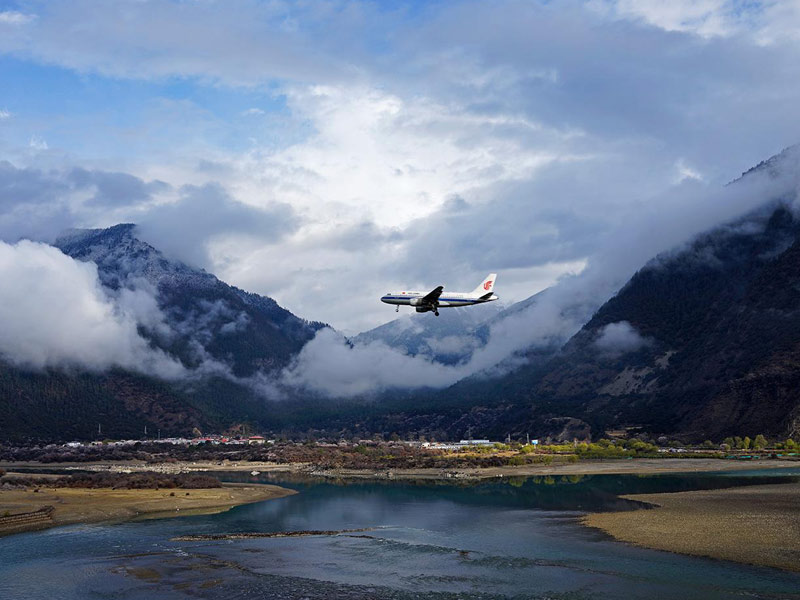 The plane flying from Chengdu is approaching Nyingchi Mainling Airport

There are about 2 flights departing from Chongqing Jiangbei International Airport to Nyingchi Mainling Airport that operate by Sichuan Airlines and Tibet Airlines. It takes about 2 hours 45 minutes to fly from Chongqing to Nyingchi. The ticket price of a Chongqing Nyingchi flight is around 1800 RMB. There are also two daily flights back to Chongqing from Nyingchi.

a.If you plan to take a flight to Nyingchi Mainling Airport from mainland China, please make sure that you have got the Tibet travel permit, or you cannot board the plane to Nyingchi. And for your trip from Nyingchi to Lhasa, you may also need to apply for some other travel permits, such as the Military travel permit.

How to Travel from NyingchiMainling Airport to Lhasa

The distance from Nyingchi Mainling Airport to Lhasa city is about 450 kilometers, which takes about 8 to 9 hours by car. Since international travelers cannot travel alone in Tibet, the only way to get to Lhasa from Nyingchi Airport is to go by an arranged car with a local driver and guide from a local travel agency. However, there are seldom travelers going to Lhasa directly from Nyingchi airport. You can have a Nyingchi tour for 2 to 3 days and then move on to Lhasa city, the center of Tibet. If you are short in time, you can also take a flight from Nyingchi to Lhasa. Since the Nyingchi Lhasa flight is not a daily flight, it is suggested to check the flight schedule in advance. 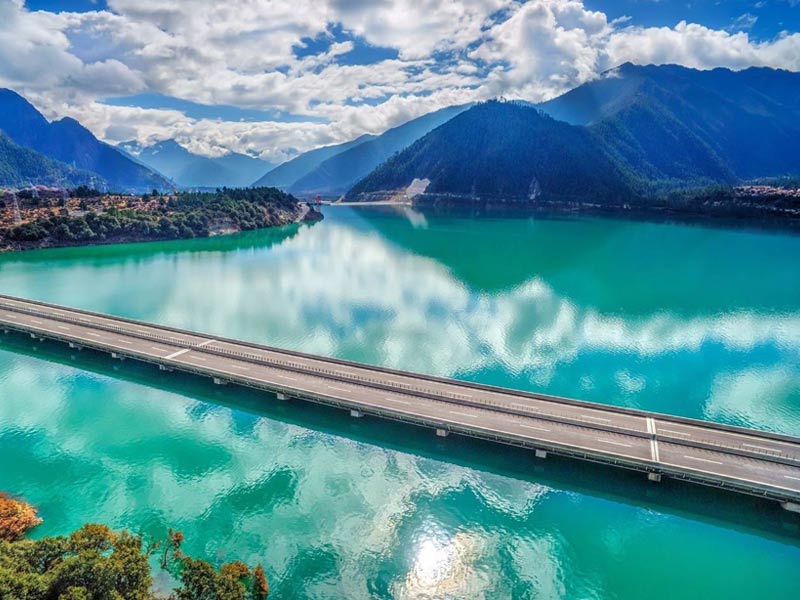 Travel along the picturesque Lhasa-Nyingchi Highway

Generally, the best time to visit Tibet is from April to October. But if you decide to enter Tibet from Nyingchi, it is highly recommended to get to Nyingchi in the early April, during which you can take a part in the famous peach blossom festival to appreciate an amazing view of the pink forests that formed by the peach blossoms.

Compared with the cold winter and spring, the early summer and autumn are the best time to visit Nyingchi. Influenced by the monsoon from the Indian Ocean, the climate of Nyingchi is quite different from the weather in other destinations of Tibet. There is much more rainfall in Nyingchi than other places in Tibet. The latter part of summer could be the rainiest season for a year. If you plan to enter Lhasa from Nyingchi in that time, you need to pay attention to the weather forecast. 0 Comment ON "Nyingchi Mainling Airport: Another Great Alternative to Fly to Tibet"