Flights from Chengdu to Nyingchi and Nyingchi to Chengdu

Meaning “the Throng of the Sun” in Tibetan language, Nyingchi is a unique and fascinating place on the roof the world. It features humid weather, dense forest, as well as the lowest altitude in Tibet. With enchanting natural scenery, pristine folk custom and mysterious religion, Nyingchi is a dream land many tourists longing for. The Chengdu to Nyingchi flight is a busy route for tourists to enter Tibet, as the low altitude of Nyingchi can help them against the AMS.

Currently, there are 4 non-stop flights between Chengdu and Nyingchi every day during peak season, operated by Air China, Tibet Airlines, Sichuan Airlines. All flights leave early in the moring and it only takes around 2 hours to get to Nyingchi. You can search for the Chengdu Nyingchi flights on some flight booking platforms, or just feel free to ask our seasoned travel consultant for the professional suggestions.

1. Since the flights to Lhasa are greatly affected by climate and seasonal change, the above schedule is just for your reference based on the peak season. Please contact us for the detailed airfare and schedule.

2. Make sure you have got the Tibet travel permit before you check in at the airport. Or, you cannot board the flight. If you didn’t apply for the Tibet travel permit, please tell us when you book the flights to Tibet. We can offer you the worry-free service, including the flight ticket booking, the permit application and Tibet tour arrangement together at the best local price. 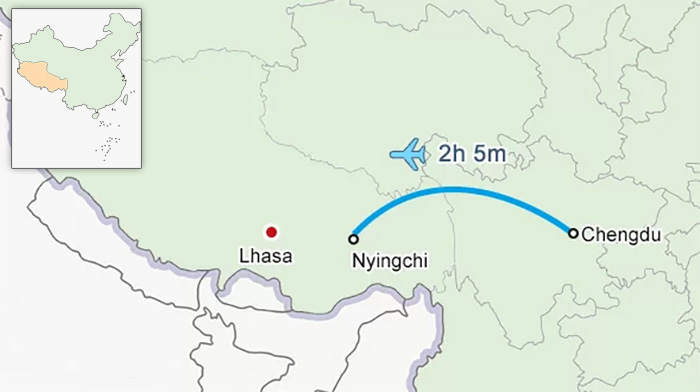 1. Why choose to enter Tibet through Nyingchi?

Situated in the middle and lower reaches of the Yarlung Zangbo River, Nyingchi is the lowest region in Tibet. For tourists travelling to Tibet or ascending to high-land area for the first time, it is highly suggested to first fly to Nyingchi. The lower elevation of Nyingchi will help tourists better acclimate to the high altitude, before they go to other higher regions of Tibet.

Meanwhile, Nyingchi is an enchanting place featuring natural beauty. Except for the snow-capped mountains and clear blue sky in other places of Tibet, Nyingchi is provided with massive pristine forest and pastoral scenery, widely regarded as the “Switzerland in the East”. If you spend a couple of days touring Nyingchi, you will be surprisingly impressed by its fascinating attractions, including the majestic Mount Namcha Barw, tranquil Lulang Forest, Midui Glacier, Ranwu Lake etc.

2. What is the best time to take the flight from Chengdu to Nyingchi?

The weather in Nyingchi is humid and pleasant despite the temperature is comparatively low. Generally, the best travel season of Nyingchi starts from April to October. While during the time of May Day and National Day holiday, the region is always crowded with domestic travelers, so it is suggested to avoid these periods for foreign tourists.

3. Should I also get the Tibet Permit before taking the flight from Chengdu to Nyingchi?

According to the regulations of China National Tourism Administration, all foreign travelers should apply for the Tibet Travel Permit before entering Tibet and have to be accompanied by the local guide when travelling around Tibet. And this also applies to Nyingchi, which is a part of Tibet. As the pioneer of Tibet tourism for overseas tourists, we provide the one package services of Tibet Visa application. You only need to send your passport copy and tour itinerary to us, we will apply for the permit on behalf of you. As soon as the Tibet permit is issued, our staff will hand it to you or send to your hotel where you stay. Then you can go to board the flight to Nyingchi successfully.

4. Where is Nyingchi airport and how to get to the downtown?

The Nyingchi Mainling Airport is located in the valley of Yarlung Zangbo River, being 50 kilometers away from the Bayi Town of Nyingchi City. At 2949m above sea level, the airport is the one with the lowest elevation in Tibet. There is a private highway specially provided for the transfer between the airport and the town. The total length of the highway is 45 km.

Tourists can choose to take a bus or taxi to the downtown area. The shuttle bus usually waits at the exit of the airport, and charges 25 CNY per person one way. And the taxi will charge higher, around 30 to 50 CNY per person. As a better option, you can use our free shuttle service as long as you book your Tibet tour with us. In this case, your tour guide will meet you at the exit of the airport and then transfer you to the reserved hotel in Nyingchi.

5. How to get to Lhasa from Nyingchi?

There are a lot of travelers entering Tibet through Nyingchi as the low altitude of Nyingchi can help them against the AMS. The Nyingchi Mainling Airport gives the travelers a chance to start their Tibet trip from the eastern part. They can fly to Nyingchi and travelling westwards to Lhasa, and even continue to explore more of this holy land.

The total distance from Nyingchi to Lhasa is about 410 kilometers, with asphalt road all the way. Except for a small section of the road which will face landslide during the rainy season, the rest part is well conditioned. Besides, the road between Lhasa and Nyingchi features gorgeous landscape with numerous attractions, like the Mila Pass and Basum Lake. Tourists can take the shuttle bus to Lhasa from Bayi Town in Nyingchi, which may take 7 to 8 hours on the way. Or, you can choose to join a well-organized group tour from Nyingchi to Lhasa. In this way, you can have enough time to stop at those beautiful resorts and take the most of this journey.

6. Can I fly to Chengdu directly from my own country?

Need some travel ideas after arriving in Lhasa? What are the top things to do after you arrive in Lhasa? Here are the recommended travel itineraries in Lhasa city and the surrounding areas with the best local price.

We offer Tibet flight tickets booking service, as well as Tibet travel permit application, and Tibet tour arrangement. Just tell us your travel plan, a quicke rereply will be send to you within 24 hurs.