What to Expect for Tibet Travel in Western Tibet?

Traveling through Tibet is one of life’s biggest adventures, and never more so than when traveling in the west of the region, in some of the most inhospitable environments in the world, on the high Tibetan plateau. Western Tibet, which covers mostly northwestern Shigatse and Ngari Prefectures, is a remote area on the edge of the Himalayas on the plateau, where the altitudes are higher, the mountains are rockier, and the landscape is more desolate for most of the year. With its ancient kingdom, sacred mountains, and desolate deserts, this mesmerizing landscape makes you feel as if you have landed on some distant alien planet, not the far west of China.

Where is western Tibet

Western Tibet covers the area known as Ngari Prefecture, and the northwestern area of Shigatse, is a more desolate area than central and southern Tibet, and as far as it is possible to get from the landscapes of eastern Tibet, in Nyingchi and Chamdo. The landscapes are almost mythical, with outsized rock outcroppings, vast salt lakes, and multi-colored mountains. The vast expansive plains are the home of the nomadic herders and their yaks, while the valleys and riverbanks are the lush and verdant areas of the region.

The climate in Ngari is much harsher than in the rest of Tibet, and the winters are colder with more chance of heavy snow. However, despite the cold and harsh weather, there is an abundance of wildlife that lives in peace and harmony in the area, from marmots and blue sheep to the wild asses and herds of Tibetan antelopes that roam the plains. With an average altitude of more than 4,500 meters, this remote area of the plateau is one of the windiest in Tibet, where the winds can gust at more than 100km/h.

Dry and arid for most of the year, around 80 percent of the annual rainfall in Ngari falls from July to early September. Temperature changes from night to day are more drastic than in Lhasa and Shigatse, and where it can be 20 degrees during the day, it can also drop to below freezing at night. And in the winter months, temperatures of minus twenty degrees are common at night. The higher altitude also means thinner atmosphere, and a higher likelihood of severe sunburn from the intense UV rays of the sun.

Top Things to Do in Ngari, Western Tibet

However, while this is one of the most desolate and remote areas of the planet, there are still plenty of reasons to travel to the area of Ngari, and it has one of the most popular pilgrimage sites in the world. Ngari Prefecture may be out in the remotest area of Tibet, but it draws thousands of tourists and pilgrims to its desert landscape every year, and that number is continuously growing as more and more people discover the uniquely stunning natural beauty of desolation.

One of the most popular places to visit in Tibet, Mount Kailash is the world’s most sacred mountain, and has been held in reverence by four separate religions for thousands of years. This huge pyramid of unusual black rock lies out in the midst of one of the most uninhabitable areas of Tibet, and is the highest mountain of the Gangdise Mountain Range, part of the Transhimalaya that run across the center of the Tibetan plateau.

As the most sacred mountain in the world, climbing this unique summit is impossible, and forbidden. However, the pilgrims regularly attend the mountain to walk around the ritual kora route, that takes you around the mountain in a pilgrimage of prayer and prostration that can take from one to thirty days. For most tourists to Mount Kailash, however, this trek around the kora route is done in around three days, taking it easy as you clamber up the steep slopes and over rocky ground on this 52-kilometer hike. Here we offer you the detailed Mt.Kailash trekking map to make your 3-day Kailash kora easier.

The trek starts at the small village of Darchen, which lies to the south of the mountain, and heads west, moving towards the Lachu Valley that runs along the western slopes of the mountain. Turning north up the valley, the first day is spent trekking along one of the most beautiful areas of the mountains, with its lush verdant riverbanks shielding the flow of water along the valley floor. After a good eight hours of trekking, you reach the first rest stop of the trek, the stunning monastery of Drirapuk. One of five monasteries that surround the mountain (and technically, the highest monasteries in the world), Drirapuk Monastery has accommodation for pilgrims and other travelers for the night, although in the busiest times of year, you may need to camp in tents due to the immense number of people making the pilgrimage.

Day two sees you climbing to the highest point of the trek, the Dolma La Pass, which sits at 5,630 meters above sea level, and is one of the highest points in Tibet that non-mountaineers can reach. The climb up to the pass is steep and arduous, and you may need to make several rest stops before you reach the prayer flag-covered crest. The view here is stunning, and you can see far out across the mountain range. After topping the pass, the route then heads back downhill on the other side, past the stunning Kadoe Lake and on down the valley to the second stop, at Dzultripuk Monastery.

The last day of the trek is the shortest, heading on down the valley to the plain below the southern face of the mountain, to the village of Zongto, where you will get a ride back to Darchen. The route along the valley floor runs through lush green meadows along the river banks, and past several sacred mani stones and mani walls, which are placed as offerings and prayers to the gods for merit on their journey towards enlightenment. Prostrating pilgrims can be seen often around the kora route, and these most devout of religious pilgrims, from both Buddhism and Hinduism, can take up to a month to make it around the kora, prostrating themselves at each step.

Lying a short distance to the south of the sacred Mount Kailash, Lake Manasarovar is one of the Great Three Holy Lakes of Tibet, and an important sacred site in Hinduism and Buddhism. A vast freshwater lake that is shaped like the sun – with its twin lake to the west shaped like a crescent moon, Lake Manasarovar is the site of pilgrimage journeys from all around Asia. In Hinduism, the lake is said to have been formed in the mind of Lord Brahma, and manifested on earth, and in Buddhism, it is believed that the lake was the spot where Maya Devi conceived Buddha. 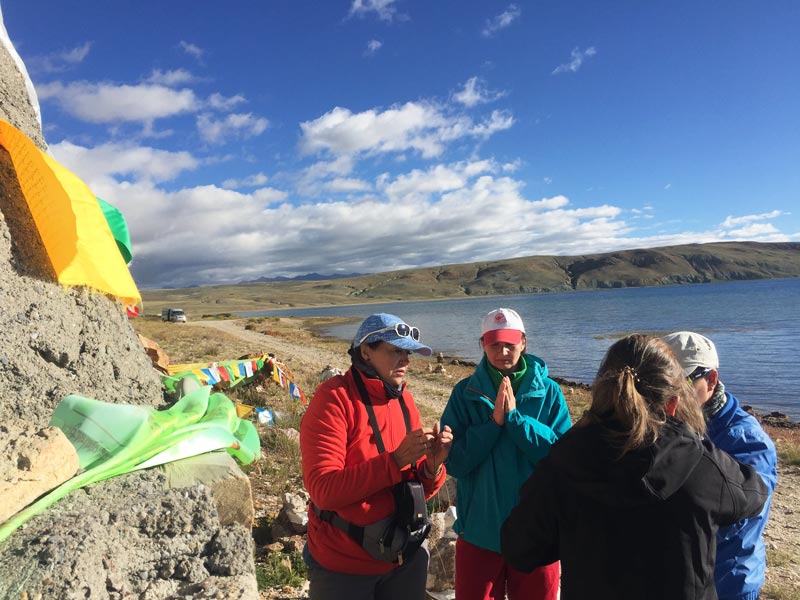 Our local Tibetan tour guide is introducing Lake Manasarovar to our clients.

Often visited when taking the trek around the Kailash Kora, the lake is just as sacred and revered in Tibet and India, and it is widely believed that to bathe in or drink of the lake’s waters, one can be absolved of a lifetime of sin. Thousands of pilgrims that make the trek around Mount Kailash every year head for the lake afterwards to bathe or drink its waters. The shore of the lake is lush and green, unlike that of its saline and bitter sister, and a trip to the lakeside is an exciting and exhilarating experience that you should not miss when in Ngari.

One of the ancient lost kingdoms of Tibet, the Guge Kingdom was the ruling kingdom of western Tibet and parts of Ladakh in eastern India and Kashmir more than 1,000 years ago. Formed by a descendent of the last Tubo King of Tibet, the kingdom was established in around 912 AD, and lasted in one form or another for several centuries. Today, all that is left of the ancient Guge Kingdom are ruins, but even those ruins are unique. Centered around the area of what is now Zanda County of Ngari, with its capital at Tsaparang close to Mount Kailash, this unique civilization built great cities out of the very rock of the mountains themselves, carving out the already existing caves to make dwellings, palaces, and temples, with only a small part of the kingdom being built on top of the plateau landscape. 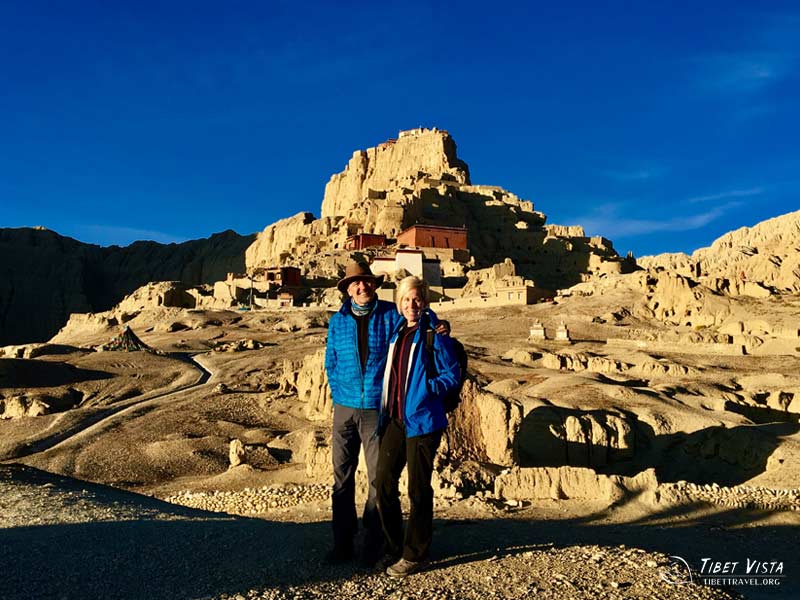 A hierarchical society, the ruling classes lived in palaces on top of the hills, while the aristocratic homes, temples, and monasteries lay in the middle section, below the summits. The lower levels were mostly cave dwellings for the lower classes, the ordinary people. The kingdom suffered a crushing defeat at the hands of the neighboring Ladakhi state in the 17th century, and the internal monastic rebellion that ensued ensured the complete collapse of the entire kingdom. With little left, the few remaining people left the area, moving back to the safer and more prosperous areas of U-Tsang, and central Tibet. All that remains are the ruins of the palaces and temples, and more than 800 cave dwellings.

Located in Zanda County of Ngari, Tsada Clay Forest is a naturally-formed clay rock formation of a kind that is only found in a few places around the world. Mainly composed of clay and sandstone, the rock formations lie on either side of the Elephant Spring River (Langqen Zangbo), and is believed to be the largest tertiary strata earth forest in the world. 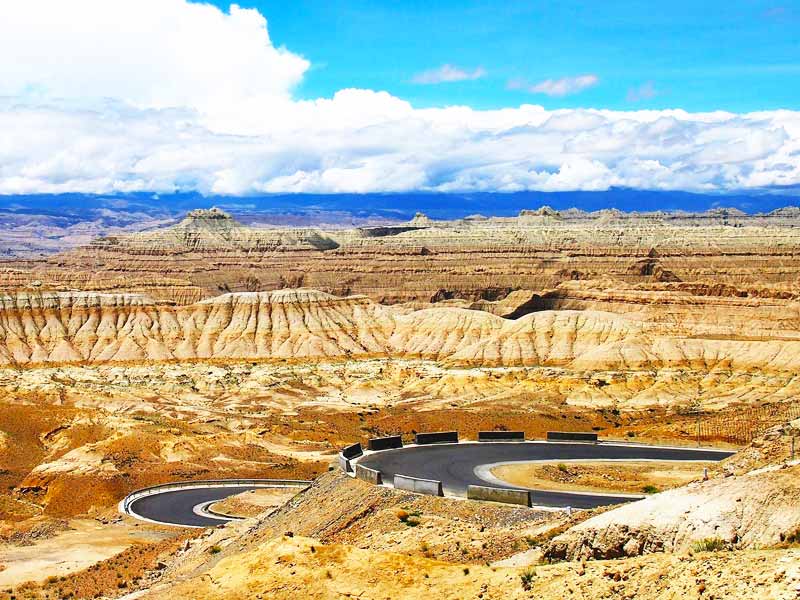 Formed by the movement of the Himalayas billions of years ago, and eroded by wind and water, the earth forest produces a wide variety of rock formation shapes, some of which can look like castles, monasteries or pagodas, and watchtowers. There are even formations that look a little like warriors defending their home, thousands of horses galloping along the ridge, and a thousand other things that your imagination can dream up from the various shapes.

Ngari Prefecture in western Tibet may well be one of the most inhospitable places on the plateau, but it is worth the three-day drive to get there, for the amazing sights and wondrous experiences that you can find in the area. A place of sacred ritual sites, long-lost ancient kingdoms, and Martian-like landscapes, this stunning land can conjure up images of out-of-this-world realms where benevolent kings led armies against the enemies of Buddha, in their quest for peace and enlightenment. A true fairytale landscape, the reality can sometimes be even more amazing than the imagination.

Bhutan Winter Trek: what to expect in Bhutan winter trekking

0 Comment ON "What to Expect for Tibet Travel in Western Tibet?"