This is an important highway connecting Tibet and Xinjiang, which has unique culture and diverse scenery. It is also the hardest highway with highest elevation among several highways to Tibet. The average elevation of this highway is above 4500 meters and the highest is more than 6000 meters above sea level, which is absolutely a challenging travel route.

Move forward to Shigatse via Yamdro-tso lake and Shigatse

Move from Saga to Lake Manasarovar(500km)

Tour Manasarovar Lake, then to Darchen to prepare your trekking (30km)

Yechen to karshgar, visit the edge of Taklamakan Desert 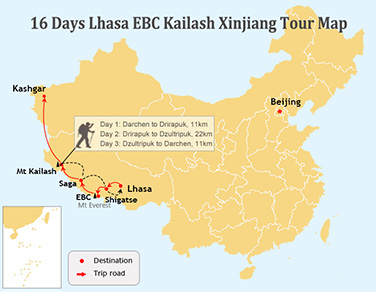 Arrive by flight or train to Lhasa. Upon arrival in the Lhasa Gongar airport or the Lhasa train station, you will be met by your tour guide and driven to Lhasa downtown. Then have a rest in Lhasa to acclimatize the high altitude.

In the morning, you will go to the most splendid museum, the Potala Palace, and explore the grandest chapels of its kind and see the jeweled burial chorten of past Dalai Lamas as well as statuary, frescoes and paintings.
Later visit the Jokhang Temple, which is considered as the most sacred temple in Tibet, and draws tremendous number of pilgrims from all over Tibet each year for it houses a magnificent image of Sakyamuni at 12 years old.
Then stroll around Barkhor is a well-known pilgrimage circuit that encircles the Jokhang, and the Barkhor street itself also serves as the biggest bazaar in Lhasa, where you can find some handicrafts, ambers, jewelry, Tibetan clothes, ect.

Today, you will explore Tibet's two greatest monasteries, Drepung and Sera which once housed about 10,000 monks. Drepung monastery is situated at the foothill of a mountain and was founded by Jamyang Choeje in 1416. The monastery is divided into two different colleges that are Drepung loselling and Drepung Gomang college. The Ganden podrang was famous among them as it is the government centre during fifth Dalai lama and later was moved to the famous Potala palace during fifth Dalai lama. In the afternoon tourists explore the Sera monastery which was founded in 1419 by Tsongkapa's disciple Jamchen Choeje. The whole monastery is divided into two colleges and there are Sera 'jhe' and Sera 'may' respectively. Among them 'Tsokhang chenmo' where the monks from all the colleges assemble and pray together there. You can also see monks debating there in the courtyard at around 6-7:30 in the afternoon section. Note: if you don't feel tired, you can try kora(circling around religious sites) Drepung and Sera monastery. Your tour guide and driver will drop you back to your hotel.

Day 4: Move forward to Shigatse via Yamdro-tso lake and Shigatse

The first day we drive westwards to Mt. Kailash via Shigatse, the second biggest city in Tibet. On the way to Shigatse, we will pass kangpa-la with 4700m. From the top of the pass in clear weather, we can see the Yamdrotso lake in fabulous shade of deep turquoise. Just a few kilometers driving through the shore of lake Yamdroktso lake reches Nangartse county and is the largest town on the lake side. Then we drive from yamdrok-tso to Gyantse city, and you have to cross the 4960m karo-la with its awesome roadside views of the Nanchan- Kangtsang glacier. In Gyantse city, you will explore the Kubum Monastery which is the town's foremost attraction. The 35m-high chorten(stupa) with its white layers trimmed with decorative stripes and its crown-like golden dome, is awe-inspiring. Finally drive back to Shigatse.

We can take western Tibet road from Shigatse to Sagar. Through it is quite a long driving, and the newly paved road can help us drive faster and safer.

Then you are moving towards the Drongpa County, the region around the sources of Brahmaputra River, which is about 167km from the sagar town. Then you will reach the main road with a couple of basic guest houses, restaurants and a small monastery called "old Drongpa". Around the monastery you can see a pile of yak heads which is carved with "sutras" and "mantras" like "OM MA NI PAD MEY HUM" which is mantra of god of compassion. And new Drongpa is a small town with a couple of shops, hotels and restaurant is about 25km apart from the old drongpa. Then head towards the Baryang with 4750m above sea level. Drive to Lake Manasarovar.

Camp by the lake

Day 7: Tour Manasarovar Lake, then to Darchen to prepare your trekking (30km)

You can relax around the lake shore and experience the natural beauty of the lake. In the summer, flocks of swans will gather on the lake, bringing grace and life to the area. You can also see so many Tibetans and Hindus praying and religious circling around the lake shore for the whole day. You can see snow-capped mountains on the background and hundreds of swans gathering on the lake will attract hundreds of thousand tourists world-wide.

Traditionally, a pilgrim undertakes 52 km trekking circuit around mount kailash commencing at darchen(4574m) and crossing the Dolma-la pass on the second day of the three day walk. Darchen is the starting point and ending for the general circuit of the sacred mount. A few kilometers after leaving Darchen, there is a valley called "sarshung" where porters are waiting for their clients. They will help the client to take belongings on yaks and horses. After two hours, you came upon a grassy plain populated by nomads. There you can refresh yourself in nomadic tent by drinking some soft drinks there. There will be another two hours at least before reaching Drirapuk(4920m). You need to camp or can rest in monastery's guest house made from cement with better facilities than others in Drirapuk. At the opposite side of Drirapuk, there you can see small monastery with its guest house little bit cleaner than others.

Day two: The second day is the hardest and most tough circuit with the Dolma-la pass, which lies 6.4km ahead but 762m above Drirapuk. The peak of Dolma-la pass is about 5630m above sea level, so it is better to set off early in the morning as the sunshine lights ridges above. After taking a rest on the peak of Dolma-la pass, you will descend to Lhachu valley via staircase, which takes about one hour from the pass. From here there is another four-hour trekking to today's final destination with no shelters in between. It is better to walk on the right side of the river and finally reach Dzultripuk(miracle cave of milarepa). Tourists are advised to get there before other groups’ arrival because the number of rooms available is so limited there in Dzultripuk. Take a good rest in the guest room and prepare for next morning's departure.

The tour guide will arrange you to visit the caves, the temple and shrines that have been built around Milarepa's cave. The walk back to Darchen is easy and the exit from the valley can be reached within three hours. At the ending point of the valley, the driver will come to pick you and take you back to Darchen.

It is about an eight-hour drive from Darchen to Zanda, though the distance is only about 243km from Darchen. After several hours of zigzagging down and up fantastically eroded gorges and gullies, we enter wider Sutlej Valley and after crossing a bridge, finally reaches Zanda. Tsamda County is the current name for the region and is known as Guge kingdom. And the county capital is located at Toling. Toling monastery, founded by Richen zangpo in the 10th century, was once Ngari's most important monastic complex. It was due to the influence of Richen Zangpo that Toling became the main religious centre of Guge kingdom after inviting the great Indian master ATISHA. The kings of GUGE replaced the city as a political centre of power by establishing capital slightly closer to the Indo-Tibetan trade routes. But the monastery is still the important cultural heritage of Ngari.

Experience various landscapes on the way to Ali, the capital of Ngari prefecture which provides an excellent place for meditation. Indus river drives from mount Kailash and flows through this region and finally towards into Pakistan. It is a modern city with central administration, business and shopping district. Then we continue to Pangongtso Lake where you can visit the mysterious lake pangongtso of which the one part of lake is inside Tibetan area and other part is situated inside Indian Territory.

Camp by the Lake Shore

The road condition is very bad as we move far towards north and on the way to Dolma, the road condition becomes more difficult after leaving dolma. Soon we will reach a pass called Tialongtan-la pass with more than 5000m above the sea level. After than its still 7-8 hours way to reach Dahongliutan.

You need to drive 499km to reach Yechen from Dahongliutan, but the journey duration depends upon the climate and road condition. Then you will enjoy beautiful Kunlun mountain ranges on the right side, and the Karakorum mountain range on the left side (more close to Indian border). The trip soon begins as we pass by Mazar across the Kunlun mountain range. The chiragsaldi is the last pass that you need to cross and steep down towards the Yecheng ravine to Xingjiang. Yecheng is situated at the edge of the Taklamakan , a city with a pretty Bazaar inhabitated by Uigur and Han Chinese.

Day 16: Yechen to karshgar, visit the edge of Taklamakan Desert

Kashgar is about 250km from the Yecheng and is the largest oasis in the whole China. The road condition is very smooth with black tar road that runs through the edge of Taklamakan desert. The scenery is very excellent with grey-black rocks and sand dunes composing the major features of the landscape of Taklamakan. The most interesting thing is that you should not miss the Sunday market, one of the largest weekly markets of Asia, as you reach there on Sunday. Especially in the morning you can see the highway, crowded with full-load donkey trucks carrying vegetable, fruits vendors, children and women.

The Xinjiang-Tibet highway is the most challenging highway with high elevation. You can appreciate charming scenery in western Tibet along the way. Furthermore, you will truly feel the sharp contrast between the stunning beauty of Tibet and its inhospitable environment.