Top 3 Reasons Why You Should Take Tibet Train to Lhasa

To many, taking the Qinghai-Tibet Railway to Lhasa is an integral part of their Tibet tour. The world’s highest ride on soaring Tibetan Plateau gives ample reasons for you to do so. Here, I have listed top three reasons why you should choose the Qinghai-Tibet Train to start your journey in Tibet. Let’s browser them together!

Qinghai-Tibet Railway, also called Qingzang Railway, is reputed as “the Sky Road”, due to on the world’s highest Plateau – Qinghai-Tibet Plateau. Since its debut in July 2006, Qinghai-Tibet Railway has attracted a whole world’s attention. It starts from Xining City, the capital of Qinghai Province, passing through Golmud City, Kunlun Mountain Pass, and the Weihe River, crossing the Tanggula Mountain Pass and entering the Tibet Autonomous Region of Anduo, Nagqu, Dangxiong, Yangbajing, finally arriving in Lhasa. With a total length of 1956 kilometers, it is an important route from mainland China to Lhasa, except by flight and overland. It is the highest railway and possesses the longest track on the frozen earth in the world. It is also one of the four major projects (The other three are: the project of natural gas transmission from West to East, South-to-North Water Diversion, West-East electricity transmission project) in the 21st century in China. It was selected as a “Global Project for 100 Years” in September 2013. It is a monument in the history of world railway construction.

Stunning Scenic Ride on the Roof of the World

Besides experiencing its particularity of location, most of the tourists choose this train to appreciate the impressive scenery along the road. When arriving in Xining (2260m), the beginning of this train, you will slightly catch a whiff of the plateau with the clear blue sky, just standing at Xining Train Station, you can predict the following journey is doomed to an eye-catching tour.

First of all, as the train leaves the station, you will view the Qinghai Lake in the distance. The people who live around the lakeside are Tibetan and Mongolian nomads, their houses also become the part of the sceneries that are reflected in the lake. Passing Gangcha County in Qinghai, the train will cross the highest tunnel from Xining to Golmud – Guanjiao Mountain Tunnel (3690m).

As long as the vast farmland comes into your eyes, you have arrived in Delingha City which is a famous tourist site. There are Keluke Lake and Tuosu Lake, the train will cross between these two lakes, you will have a chance to view the landscape of lakes and mountains. Particularly, if you travel in summer and autumn, a glorious sunset reflecting off the lake, the flowers and pasture on the lakeside, the herds of yaks and sheep pasturing, and flying birds in the sky constitute an enchanting picture. 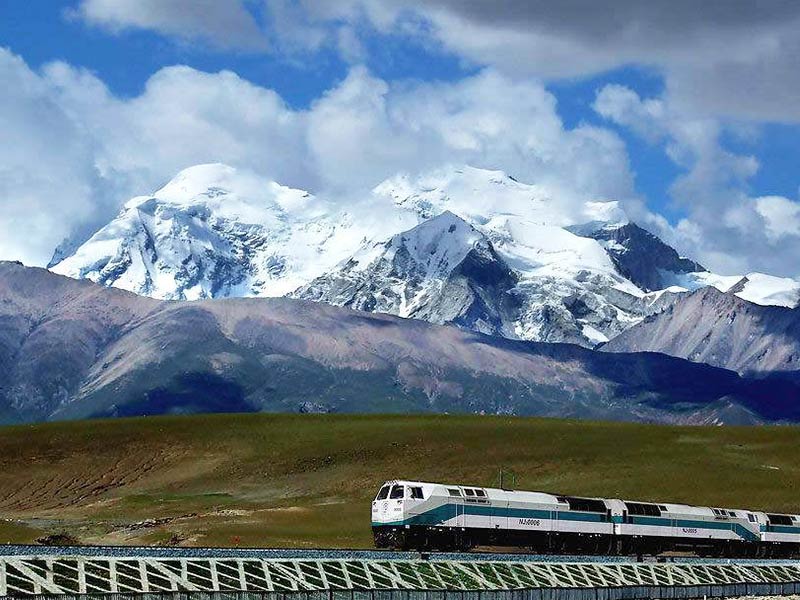 Continue to move, the train will enter the Kunlun Mountains, you will take a look at the mist-shrouded Mount Kunlun in the distance, as a fairyland making you unwilling to leave. After viewing the beauty of Mount Kunlun, you will pass a long tunnel, winding alpine mountains, and the imposing viaduct. And there are some shrines of the god of the mountain, although they are quite basic but full of single-minded faith. Some scattering stone tablets on the roadside were carved some ancient characters, they may tell the history of culture in this region.

When viewing the vast desert, you have arrived in Qinghai Hoh Xil. In general, this region is untraversed, so it has the best-preserved primitive ecological environment. Tibetan antelopes, wild yaks, kiang, Tibetan gazelle live here, and there is a 20-kilometer stretch that is used for Tibetan antelopes migration. Passing this region, the train track is perfectly straight, as a road to the sky, maybe this is the real meaning of the “Sky Road”.

The train passes the Tanggula Pass, you will know what the real landscape of Tibet, especially, when entering Nagqu. The landscape of Nagqu in summer is a colorful tapestry composed of blue sky, white clouds, rainbow, and the scattering yaks on the vast meadow. If traveling in a proper time, you may encounter the enthusiastic north Tibetan who will welcome you with wonderful Tibetan dance and food.

Before arriving in Lhasa, you will have a chance to appreciate the beautiful Cona Lake, it is considered holy lake to the Tibetans, especially in Bon religion. Also, the lake is seen as the “soul lake” of the Razheng Living Buddha. You could see the lake reflects the floating white clouds in the blue sky, sparkling in the breeze, very beautiful, like a bright luster painting, which will make you comfortable.

In fact, the scenery on the way to Lhasa cannot be viewed in each season. Best time to take the train is from July to October, also the best time to visit Tibet. Whether along the road or in Tibet, the scenery is quite enchanting. You can appreciate the golden rape flowers surrounding the Qinghai Lake, when passing by, like entering in a fairyland. In summer and autumn, when crossing Delingha City, you will be also surprised by the vastly golden field and the sunset is reflected in the lake, which will make you have an illusion. The lake complements the wildflowers, the yaks and sheep on the lakeshore, and the migratory birds.

Certainly, if you want to appreciate peach blossom in Nyingchi, March and April are the best seasons. But in these seasons, it is easy to have the altitude sickness due to the unstable atmospheric pressure on Qinghai-Tibet Plateau. Therefore, you’d better learn more about what you should pack before the travel to Tibet.

The Most Efficient Way to Reach Tibet

Otherwise, taking the train to Tibet is the most efficient means of transportation in peak season. If you take a plane to Tibet, the cost is much higher, you may fail to book the ticket in peak season, and the number of flight is less than that of the train. More importantly, due to the location and altitude of airports in Tibet, the delay of flight will happen frequently. And if you drive to Tibet by overland, which will take the plenty of time, and in the rainy season, you may encounter the landslide, heavy rain, and debris flow, it is quite dangerous without the professional guide, and you may spend a few days on the way. Taking the Qinghai-Tibet train can help you acclimatize

If traveling in Tibet during peak seasons, you will fail to book the train tickets due to the shortage of train tickets, we recommend you to take a plane to Xining, and then take a train to Tibet because the number of the train from Xining to Lhasa will increase in peak seasons. Besides, if you don’t have enough time yet still want to experience the Qinghai-Tibet, Then flying to Xining and jumping on the Tibet train from Xining are an alternative option. Xining is the real beginning station and on the Qinghai-Tibet Railway, also the essence. Particularly, after Golmud Train Station, you will truly have a deep awareness of real alpine landscapes. Of course, the best way is that we help you arrange, owing to the rich experience and real information about the train.

How to Enjoy the Ride for International Tourists

After reading the top 3 reasons, you must be itching to take the Qinghai-Tibet train. In order to let you enjoy the ride more, it is necessary for international tourists to give more details. Whether you take the flight or train to Tibet, you need to prepare the Tibet Travel Permit. We can offer the permit application service, and we have already helped more than 10 thousand tourists to successfully get the permits. So we can absolutely guarantee your Tibet tour.

When you board the train, you will find the train will offer you considerate service, the supporting facilities are from soup to nuts. Not only can you eat the delicious food, but also be offered the oxygen supply equipment in each carriage, if you feel uncomfortable, ask the staff, they will help you at once.

Although we will offer the careful and considerate service for you, to ensure your safety, here, I will give you some tips for your Tibet tour.

1. Prepare sufficient clothing, such as down jack, cotton wadded jacket, and so on, if you are want to trek to Everest Base Camp, you need to pack some pieces of trekking equipment.

2. To avoid the altitude sickness, when you arrive in Lhasa, do not rush to visit some sites, the best way is to have a good sleep in your hotel. If it is the first time to travel in Tibet, you can drink Rhodiola rosea tea a week in advance.

3. Due to the high altitude, it is easy to have the sunburn, the sun cream, sun hats, and sunglasses are also necessary.

4. About the cash, we highly recommended that you take some cash, it is difficult to withdraw money in Tibet.

5. For international tourists, you are not allowed to travel in Tibet personally, so you need to be accompanied by local guide and driver, contact us, we will help you.

6. When touring in such a Buddhist land, please respect their religion, although you do not understand, and do not touch the Buddha statues in the monasteries.

How to Choose Hotels in Tibet?

How to Plan Tibet Tour for Photographers?