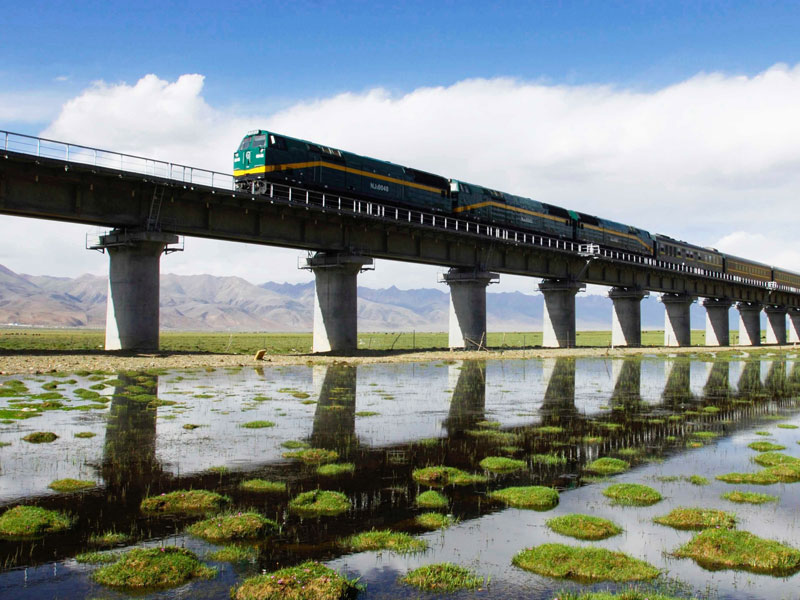 Qinghai-Tibet Railway crosses the source of the Yangtze River, Tuotuo River, passes through the highest railway point in the world-Tanggula Mountains, enters into the northern Tibet and Dangxiong prairie and finally reaches the sacred “City of Sunlight” Lhasa.

Located in the west of Xining, Qinghai Lake is China’s largest inland lake. Beautiful scenery and good road conditions around the lake are the main factors that make Qinghai Lake a popular tourist destination.

The best time to travel Qinghai Lake is in July and August when there are acres of rape flowers competitively blooming around the lake. It is an amazingly beautiful picture that the azure blue lake are surrounded by the golden bright yellow and the alpine pasture are dotted with colorful wildflowers and countless plump cattle and sheep. In addition, in May, Qinghai Lake is a paradise for bird-lovers since there are many different kinds of birds appearing in Qinghai Lake. As China’s largest salt lake, Qarhan Salt Lake is also one of the world’s most famous inland salt lakes. The Qinghai-Tibet Railway is passing across the Salt Lake of Chaerhan.

In the scenic area of Qarhan Salt Lake, there is a salt bridge extending to the center of the lake. The hardness of this bridge is the same to that of the general asphalt road. When the road damages, just pour some brine on the road and the salt road can be repaired.

White salt crystal is on both sides of the Qarhan Salt Lake. The lake water permeates with clear green. On sunny days, the surrounding scenery, the sky and the white clouds are reflected in the lake. Salt Lake of Chaerhan is a great place for photography. Namtso Lake, lying between Dangxiong County and Naqubange County in Lhasa, is the highest salt water lake in the world. With an altitude of 4718m, Namtso Lake is 70km long and 30km wide, covering an area of 1920 square kilometers. Namtso Lake, as the largest lake in Tibet, is a holy land in the eyes of pilgrims. Namtso Lake means “the Heavenly Lake” in the Tibetan language. According to a Buddhist legend, the five islands in the vast lake are the embodiments of the Five Buddhas. Buddhists who go to Namtso Lake will worship reverently.

Every year, especially the Tibetan Year of the Goat, the holy Namtso Lake attracts many believers all over the country to do worship and chant scriptures here. It can help believers seek the transcendence of the soul. Cuona Lake, located between the Nyainqentanglha Mountains and the Kunlun Mountains, is a natural scenic spot with a plateau lake. Cuona Lake, the world’s highest freshwater lake, is 4650 meters above sea level, covering an area of about 300 square kilometers. It is one of the most famous attractions along the Qinghai-Tibet Railway in Ando County.

The water of Cuona Lake is clear and green. The fish swim and jump gracefully out of the water. You can see Zhuoge Peak which is in distance from the lake. The mountain and water are perfectly matched together. Cuona Lake is a holy lake in the eyes of local Tibetan people’s eyes. There are thousands of Buddhists coming to worship when it is a Tibetan Year of the Dragon.

In the east of the lake, the Qinghai-Tibet Railway passes by the quiet and beautiful lake. The closest distance between the lake and the Qinghai-Tibet Railway is only 20 meters. A viewing platform is set up here. In the blue sky and a vast expanse of grassland against the background, in summer, the clear green Cuona Lake is exceptionally beautiful against the background of the blue sky and the vast grassland. 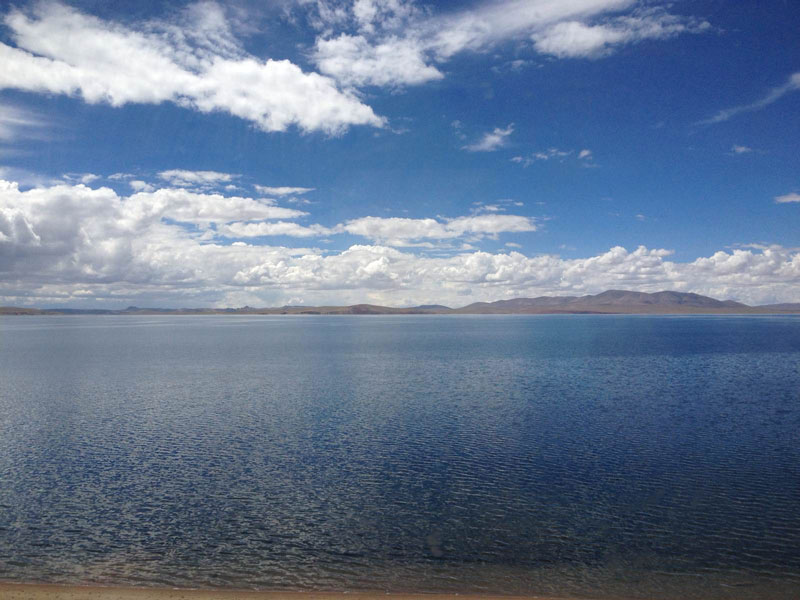 As one of the three sources of the Yangtze River, Chumaer River originates from the eastern foot of the Hol Xil Mountain which is about 150km away from Yelusu Lake. Chumaer River runs to the Tongtian River from the west to the east and then into the Jinsha River; at last, it surges into Yangtze River.

Chumaer River is 4920 meters above sea level. There are many crescent dunes distributed in the valley basin, which has become a major natural landscape in Chumaer River. The dunes are generally about 20 meters high. And, the highest dune can be up to 50 meters. This is undoubtedly the highest distribution area of dunes in the world.

The wide Chumaer River, with brown water waves, flows slowly to the southeast. The bare river beds have been washed like fish scales.

Look around and you will see the subgrade of the Qinghai-Tibet Railway in Chumaer River Scenic Area is overhead. It is said that the overhead subgrade is set up for Tibetan antelopes. With the overhead subgrade, it is very convenient for Tibetan antelopes to pass through under the subgrade of the Qinghai-Tibet Railway. Tuotuo River, also known as Ulan Moron River, is located in the southwest of Qinghai Province. Tuotuo River originates from Geladandong glacier and is also a source of Yangtze River.

Around Tuotuo River, there are some other scenic spots, such as Yangtze River First Bridge, Source of the Yangtze River Monument and Hoh Xil Protection Station. Chaka Salt Lake, Fairyland in Qinghai, has Reopened to the Public

Gyirong – A Jewel Embedded in Southern Foot of Himalayas