You will experience a huge crowd in Tibet during peak seasons. If you want to avoid such hustle and bustle, travel Tibet during winters. You will enjoy the snow covered plateaus over there. Though many of the places in Tibet are chilled, but still Tibet is not that much chilled as you think, especially in Lhasa, where the temperature is even cozier than that of Beijing. November to the end of March is the main winter season there. Winters in many areas are accompanied by average temperature ranging from 10-18 degree centigrade along with warm sunlight. 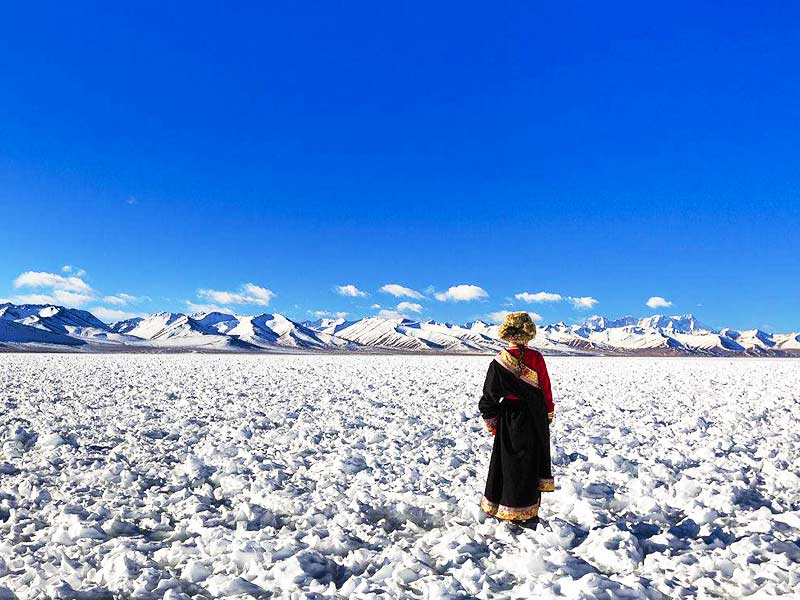 The main destination of winter tour to Tibet is Lhasa and its surroundings. The abundant sunlight and its low altitude make its winter temperature more than 10 degrees but it may fall to 0 degree centigrade at night. Also the dry weather at night makes you feel more chilled. But on the other hand, such type of weather is comfortable during warm sunlight.

You will get a good opportunity to realise the calmness of the mysterious and holy land of Tibet. You will come across only a few tourists there during winters which will give you a relaxing atmosphere with a little noise during sightseeing. And you will have a great visit to every attraction without any disturbance. Also don’t worry for entrance tickets to famous tourist sites like the Potala Palace. You will not face any limitation of getting inside the Palace for an hour. Visit all of its chapels, halls and rooms at your best.

Cost issues might be a concern for some of the travellers. Rather it is economical to travel in winters. Many airlines, travel agencies and hotels offer discount schemes to attract maximum tourists without compromising in services. Nearly 30% of the cost can be saved if you travel there during winters.

Some travellers worry about acclimatization in winters at higher altitudes. But it won’t create much problem if you move ahead with some good plan. You should stay in Lhasa for at least two to three days to acclimatize the high altitudes before you leave for other destinations in Tibet.

1. Winters are not that cold in Tibet

Though many of the places in Tibet are chilled, but it is not that much cold as you are expecting it to be. It is rather warmer than the capital city of China. The temperature here never goes below the freezing point. Snowfalls are often occasional, as days are usually sunny throughout the year. Lhasa’s average temperature ranges from 7-9 degree centigrade accompanied by warm weather at day time, whereas the nights are quite cold. Day time is sunny and dry. 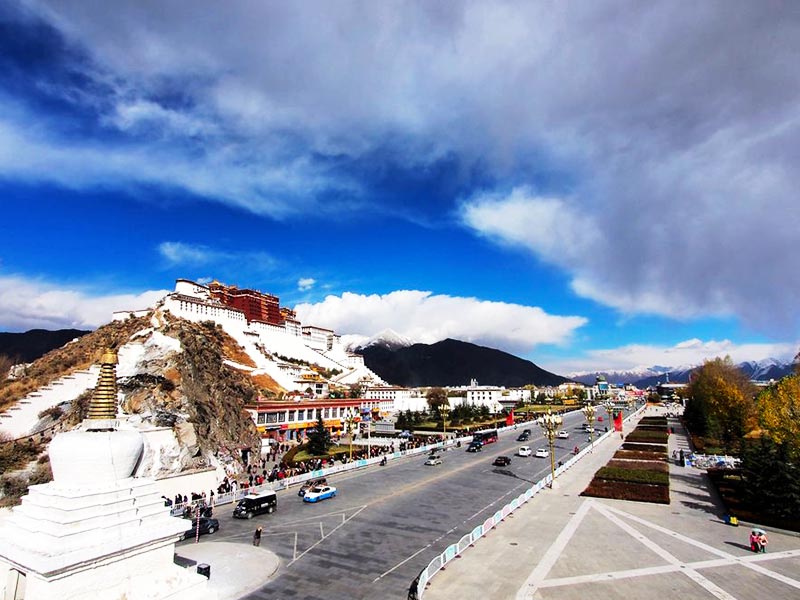 2. More number of Tibetan pilgrims and more experience along with locals

During winters, Tibetans are finished with their husbandry and move to Lhasa for their worships. Religious activities and temples are found at every corner in the country with a large number of worshipers and devotees coming from all across the world having their butter lamps, burning incense and a spinning wheel meant for prayers in their hands. While going to Lhasa, tourists will come across many religious people who are prostrating themselves devoutly over the ground for showing their deep respect for the holy city. 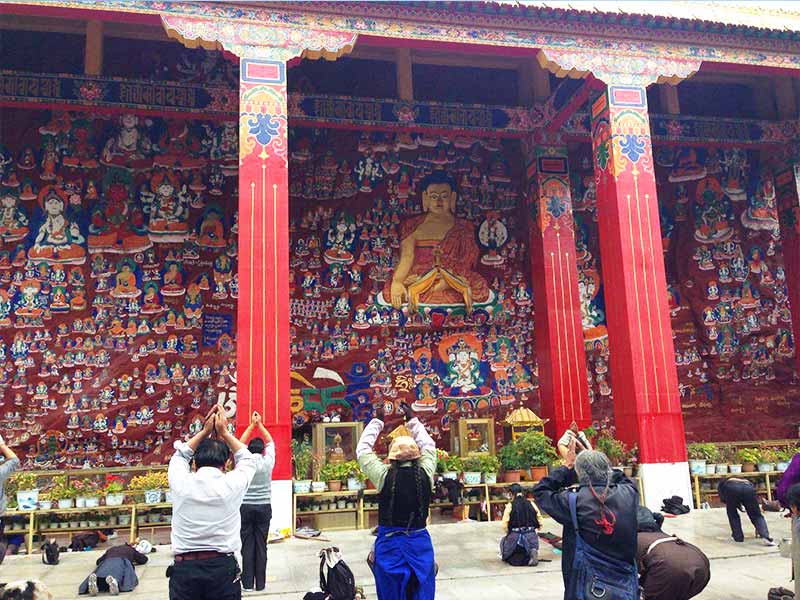 But if we talk about destinations and cities, there you will see only a few tourists which will allow you to enjoy your tour more leisurely without much hustle-bustle which is not possible during peak seasons. So if you want to take the opportunity of enjoying the country’s calmness, plan your trip in winters. Also you will get enough time to know much about the Tibetan culture and lifestyle by visiting to some locals, talking to them and getting a better understanding about their life. For experiencing Buddhist atmosphere, travelling in winters will be the best choice for you.

Tibetan people, the natural landscapes and villages there will give you a lot of opportunities to click superb photographs. During winters, the sun lies a little lower and also the sky is very clear which helps you to cast ambient light and snow covered mountains are illuminated perfectly. There is greater visibility and greater brilliance in the atmosphere that time as no rainfall occurs there during winters, nor there any fog. If not interested much in photography, just go to a tea house to enjoy the warm sunshine and the Buddhist atmosphere there. The vibrant colors of its vegetation changes from season to season. You will see the continuous ranges of snow covered mountains like Mt. Namjagbarwa and Mt. Everest. There is fog all around the mountains and clouds cover the peaks during summers and spring because of the high humidity and low altitudes. You will appreciate the colourful migratory birds flying in Lhasa. Thousands of birds fly towards Lhasa River during winters as Tibet gives them a favourable environment, lakes, pastures, and wetlands to them. Yellow duck, bar-headed goose and black necked crane are examples of a few of them. 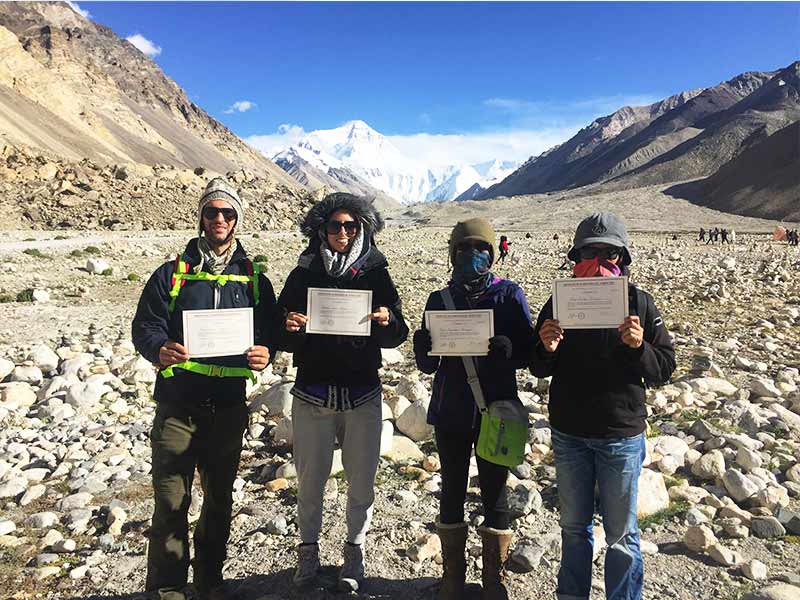 Made it to Mt.Everest in winter

5. Exploring the folk customs of locals through traditional festivals

There are many festivals that occur during winters in Tibet. Tourists are very excited to join such events. They love to understand their culture and customs. You must join at least one festival on your visit to Tibet. It will surely add some unforgettable memories to your life. Losar, the Tibetan New year, falls on December 29, every year according to Tibetan Calendar. It is the occasion of reunion for the families of Tibet and Pray to God for a good fortune in the coming year. Winters are considered as an off season for Tibet travellers. Therefore the cost of entrance fee, transportation, accommodations are affordable in winters than in summers. At least 30% of an amount can be saved if you travel during winter.

7. Booking train tickets and applying for travel permits is easier

Because of few tourists, getting Tibet Travel Permit is easy. Also it is very easy to book trains and flights. Flights and trains also run during winters, so you may even get discounts while buying your tickets.

Advantages of Touring Tibet in Winter over Summer

If we compare travelling Tibet in summer to that in winter, winter travel will be regarded as a wise choice.

You may stay in hotels and resorts for sufficient time and may get in close contact with the Tibetan culture. Usually the tourists complain that they didn’t get enough time to observe Jokhang Temple and Potala Palace from inside. Also, the natural and cultural sports splash out within a span of half an hour or one hour because of huge crowd. Whereas when you are in Tibet during winters, you may stay inside the palace for as long as 3 to 4 hours and can observe minute to minute detail of the palace. You will also be able to get a detailed knowledge about the Buddhist culture of Tibet. You may have a word with the monks there during their free time.

Tour guides are also available easily during winter. They usually have a fewer groups in this season which means that they will pay much attention to each and every requirement of your trip. There care will be comparatively more than what they do in high paid seasons.

Even the top most accommodations are available at very reasonable prices. Even the luxurious star rated hotels, hostels and guesthouses are providing discounts of 30 to 50 percent in their prices. Such a price cut in accommodations attracts most of the travellers. Also the heating conditions at the hotels are well equipped and attractive to the travellers. Fretfulness if any will vanish away with a warm bath followed by a quiet sleep.

And Tibet travel experts handpicked the most suitable and popular itineraries for private Tibet winter tour, covering the hot destinations and festivals of Tibet like Lhasa, Yamdrok-tso Lake, Shigatse, Tsedang, Everest Base Camp, Nyingchi, Kathmandu, Tibetan New Year and Gaden Ngachen Chenmo Festivals to make the most of your time in Tibet.

Advice for Winter Travel to Tibet

Besides the price cuts and all discounts, you need to consider few more facts if you are planning to go Tibet during winters.

1. Make your preparations with enough warm clothes. This will prevent cold and other respiratory tract problems. There are temperature variations during night and daytime. Hats, gloves, thermal underwear, fur boots, fur coats, feather garments and many more will protect you from the winter cold of Tibet.

2. Lip protectors, sunscreens, glacier caps, sunglasses and other products for skin care should be kept for preventing intensive snow blindness and sunshine.

3. Keep a camera that has an ultraviolet filter that will help you in taking perfect pictures. During winters, ultra violet rays are strong in Tibet. Therefore this ultra violet filter will not make your pictures appear purple. If you are photographing against light, use flash lamps for storing light.

Insider tips: As a normal practice, mid-Feb to March Tibet tour is unavailable for international tourists. The hot season of Tibet tour starts from April to Oct.

Ultimate Guide to Cycling from Lhasa to Holy Lake Namtso

How to Plan a Trip to Nepal?

0 Comment ON "Seven Reasons for Travelling Tibet in Winter"