With an average altitude of above 4,000 meters, Tibet is in the southwest frontier of China, also known as “The roof of the world” on Tibetan Plateau. The mighty altitude and mountainous topography lead to a distinctive weather and climate, with powerful UV light, much longer daytime than most of the places you’ve visited and drastic temperature change between day and night. 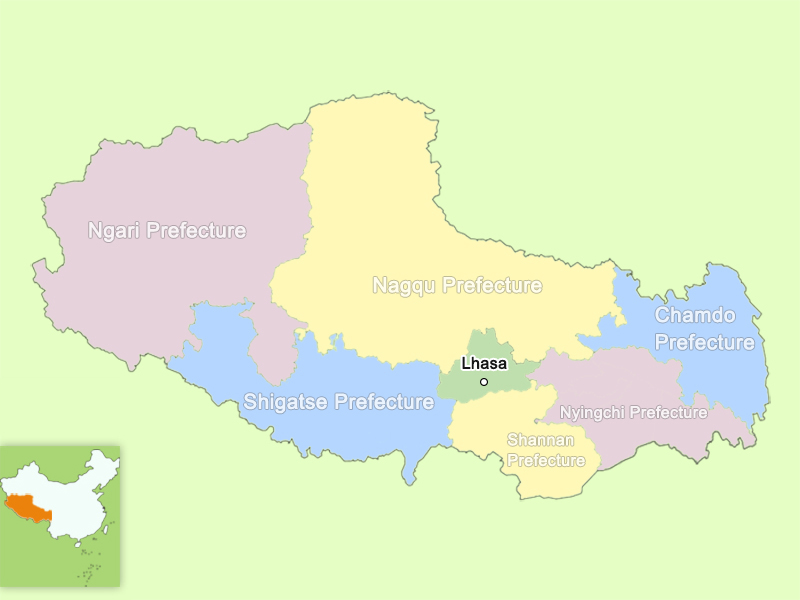 Covering a walloping area of 1,228,400 square km, Tibet finds its most attractions, scattered in 7 major prefectures, such as Lhasa, Shigatse, Ngari, Shannan, Nagqu, Nyingchi and Chamdo. And each region features a unique climate and weather. For tourists, prior to your visit, having some basic knowledge of the typical weather and climate in Tibet will facilitate your Tibet to a great deal.

Climate and Weather in Lhasa

Lhasa is the central part of Tibet with an average altitude of 3650 meters. It’s a semi-arid monsoon climate in the temperate zone. The sunshine hours are around 3,000 a year, which is 1100 hours longer than that of Shanghai. For that, Lhasa is crowned as the “City of Sunshine”. The annual precipitation is concentrated from July to early September but raining at night mostly. The average temperature is 7.5℃ highest temperature can reach 29℃ and the lowest is -16℃. 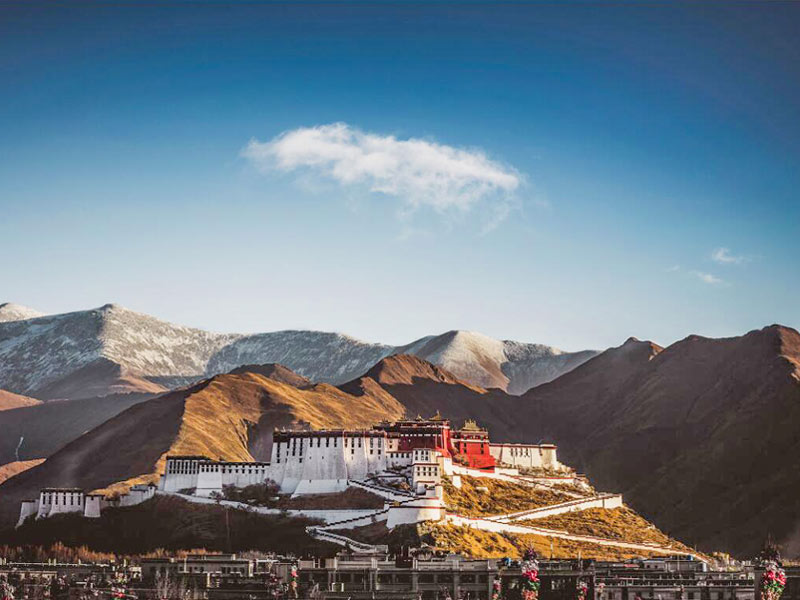 The sunrise in Lhasa

In winter and spring, the climate is very dry and the wind is strong. Because of this many people choose summer and autumn for traveling. As a result, the July and August become the peak seasons, which overlaps the summer break in China. At this time, the tickets of Potala Palace are often sold out early and even the doubled price couldn’t stop the enthusiasm of tourists from all over the world.

The main attractions in Lhasa are not far from each other. Besides the Potala, there are Jokhang Temple, Barkhor Street, Ramoche Temple, Norbulingka, Zong Lu Kang Park, etc. All of these attractions are located in the same district, preserving precious treasures or having a beautiful scene or contenting distinctive Tibetan style. All are worth to visit.

Climate and Weather in Shigatse

Shigatse is in the south of Tibet which is known as “The Backyard of Tibet, and the gateway to the Mt. Everest”. Roughly three regional climates dominate the Shigatse region. To the north of the Himalayas and to the south of the Gangdise-Nyainqentanglha Mountain, the semi-arid monsoon climate plays the major role; while the north of north of the Gangdise and Nyainqentanglha Mountain enjoy sub-frozen monsoon and semi-arid, Arid climate; For the southern part of the Himalayan range, you will experience the temperate monsoon and semi-humid climate.

Owing to the extreme altitude (with an average altitude of 4000m), you will find thinner air and stronger solar radiation, esp. in Everest region, with annual temperature staying around 0 °C in the western sub-frozen zone, and about 6.5 °C in the eastern temperate zone. Stunning View of Everest Base Camp in Tingri, Shigatse, Tibet

The crisp and dry air and windy weather mark most of the time throughout the year. You won’t be able to see much precipitation. Mid-April to early June , and Sept. to Oct would be the most ideal time to make it to EBC in Shigatse.

Apart from the world’s highest mountain, do visit the magnificent Tashilhunpo Monstery, which is the traditional seat of Panchen Lama. While on the way to EBC, with time permitting, it’s worthwhile to make a detour to tour Sakya Monastery, which houses the largest collection of Buddhist manuscripts and is taken by many as a “treasure house” of Tibetan Buddhism.

Climate and Weather in Ngari

Ngari Prefecture is a place where the Gangdise Mountains and Himalayas gather. Being called “the origin of thousands of mountains”, it’s the birthplace of Yarlung Zangbo River, the India River, and the Ganges River.

Ngari is located in the west of Tibet with an average altitude of 4,125 meters. The little-populated region features heavy wind that can reach 8 degrees. Such weather lasts for 149 days (approximately) every year. The average temperature is below 0℃. Even in August, the temperature is only 10 ~ 20 ℃ and below 0℃ at night. From May to mid-Oct would be the best time to visit Ngari. 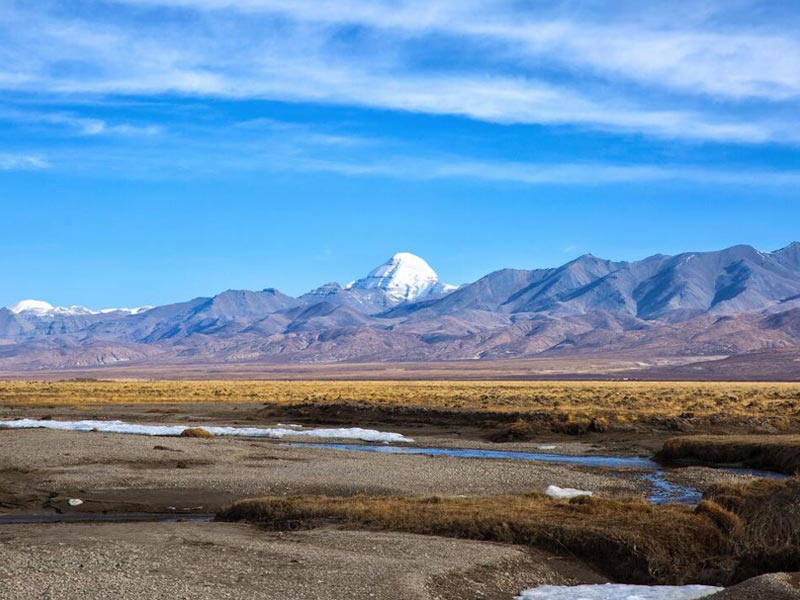 The raining days are rare in this area and Winter is long and freezing. But even in such an extreme climate, this area has beautiful scenery such as Lake Manasarovar where the Buddhist treat it as “The Most Holy Lake”. Mt. Kailash, believed to be “Center of the Universe” in Buddhism, draws a great number of international tourists for a physically-challenging yet spiritually-uplifting kora around the most sacred mountain in Tibet. And the ruins of Guge Kingdom , spectacular Zanda Clay Forest and Tholing Monastery whisper a completely different story of Tibet you can’t see anywhere else In Tibet.

Climate and Weather in Shannan

Often compared to the “birthplace of Tibetan civilization”, Shannan, is situated in the middle and lower reaches of the Yarlung Zangbo River, to the south of the Gangdise Mountains and Nyainqentanglha Mountains in the Qinghai-Tibet Plateau.

Averaging an elevation of 3,700 meters, Shannan enjoys a temperate arid climate. The annual average temperature stays around 8.8 °C to 31 °C. The rainy season comes mostly from June to Sept, with less than 450 ml precipitation annually. Probably to your surprise, the typical terrain of southern Tibet valley can get as many as 2600-3300 hours of sunshine each year. It’s no wonder than Shannan is highly praised as the “granary of Tibet” for its fertile land and pleasing climate. 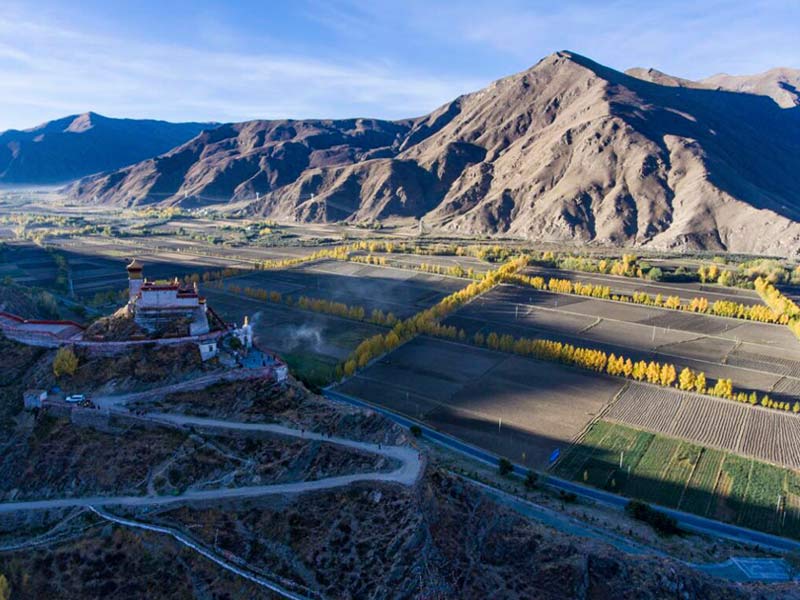 And largely because of the hospitable environment and ample supply of water, many “1st” record can be found in Shannan. In addition to turquoise Yamdrok Lake, you can explore the Yumbulagang, the first palace in Tibet; the well-known Samye Monastery, the very first Tibetan monastery and first Buddhist academy in Tibet and a number of intriguing Buddhist sites to visit. One of the off-the-beaten tracks for a trek is Chim-puk Hermitage.

Climate and Weather in Nagqu

Left with one of the last uninhabited regions on our planet, Nagqu is home to boundless untouched prairie, indigenous Tibetan nomads. The mass region, covering 369,674 km2, nestles amid lofty Tanggula Mountains, the Nyainqentanglha Mountains and the Gangdise Mountains, with an average elevation of 4500m.

The sub-cold climate zone, together with the complicated terrains, such as, grassland, rolling mountain range, wetland, deep valley, and untamed wildlife make Nagqu a paradise for adventurers. The annual average temperature is -0.9℃ ~ -3.3℃ and precipitation is 380mm. From May to September, these 5 months are the golden time to visit. The weather is relatively warmer than other months and particularly in summer the massive grassland is blanketed with full-bloomed wild flowers. 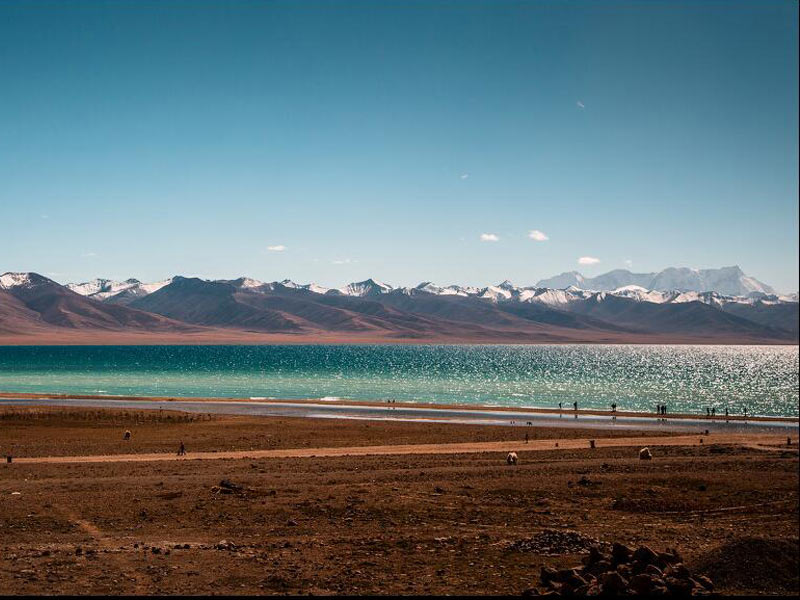 The annual Nagqu Horse Racing festival (in August) is a perfect chance to gain the first-hand experience of resourceful Tibetan nomads and enjoy a wild array of rarely-seen outdoor events, such as horsemanship competition, wresting, etc. on the northern Tibetan plateau. Of course, to the most of the tourists, the very reason to visit Nagqu is for the heavenly view of celebrated Namtso Lake, located on the border of Lhasa and Nagqu. The incredible saline lake against the rolling snow-capped Nyainqêntanglha mountain range will surely take your breath away.

Climate and Weather in Nyingchi

Many tourists would choose Nyingchi to enter Tibet, largely because of its lowest altitude in Tibet (around 3000m on average). The topography of Tibet forms a big gap and is facing to the Indian Ocean, which causes the special humid and semi-humid tropical climate in Nyingchi Prefecture. Annual precipitation is 650mm and the average temperature is 8.7℃. 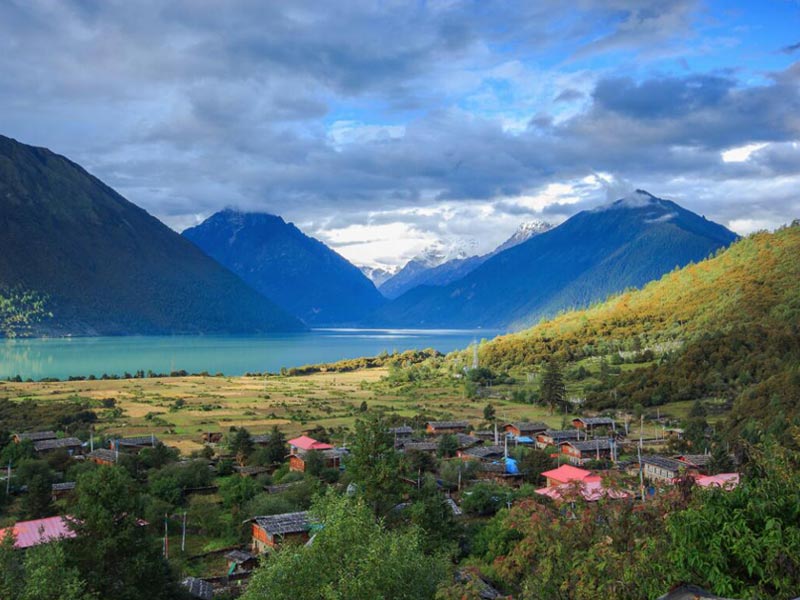 Unlike like the barren landscape in western Tibet, Nyingchi, often compared to the “Eastern Swiss-Alps in Tibet”, is embraced by exuberant forests in four seasons. The lofty Namcha Barwa, enchanting Basum-Tso, and gentle Niyang River, Lulang Forest, rosy peach blossom in spring, etc. make Nyingchi the most hospitable region in Tibet.

Free of the fear of acute mountain sickness, and the lack of oxygen, you will find yourself wandering through the magical world of forest, lakeside and gorges, surrounded by giants of snowy mountains.

Climate and Weather in Chamdo

Chamdo, situated in the northeast of Tibet, acts as the gateway to Lhasa Sichuan and Yunnan, overlapping the famous tea horse trade route for centuries. It has an average altitude of above 3,500 meters. Rivers and mountains are distributed in parallel from south to north.

The climate features temperate and semi-arid monsoon weather. The annual temperature difference is small but in days are very different. The sunshine hours are 2,100 ~ 2,700 a year and the average temperature is 7.6℃. Annual precipitation is 477.7mm while the oxygen content is low which is only 2/3 compared to plain areas.

The 72 curves of Nujiang River is a steep route on Sichuan – Tibet Highway. As one of the most dangerous ways in the world, it impressed every single traveler. It is truly a great but exciting challenge for the cycling enthusiast. You may learn the exotic customs of Khampa culture. The picturesque Rawok Lake, Galden Jampaling Monastery, the most prestigious Gelugpa sect monastery in Chamdo, etc. are some of the top experiences to enjoy in Chamdo. 0 Comment ON "Tibet Climate and Weather in 7 Major Prefectures"