One of the holiest pilgrimages for Hindus from around the world, the full moon yatra to Mount Kailash and Lake Manasarovar is the journey of a lifetime for many Hindus and is a popular tour in Tibet Autonomous Region. Believed to be the home of the Hindu god Shiva and the goddess Parvati, the pilgrimage to the sacred mountain is a way to attain salvation from all the sins committed in one lifetime.

Mount Kailash lies in the west of Tibet, in the Ngari Region, and is part of the Gangdise Mountains of the Transhimalaya. With an elevation of 6,638 meters (21,778 feet), the mountain is the most sacred mountain in the world for four different religions, Hinduism, Buddhism, Jainism, and Bon. Known as the legendary mountain of Kailash, where Lord Shiva resides with his wife Parvati, it is the place of pilgrimage for thousands of Hindus every year, which follows a tradition that dates back thousands of years. There is also a kora route around the mountain that takes three days to complete, although many pilgrims can do it in one day, while others take several weeks, prostrating themselves on the ground as they circumambulate the sacred mountain.

The nearby Lake Manasarovar is also considered to be sacred in Hinduism and is just as important as the mountain. According to the Hindu faith, the lake was created from the mind of Lord Brahma and is the personification of purity. It is believed that anyone who drinks from the lake will be bound for the abode of Lord Shiva on their death, and is cleansed of the sins of 100 lifetimes. Bathing in the lake is also believed to wash away the sins of a lifetime, and the kora route around the lake, when completed 108 times, is believed to be a way to attain Nirvana.

Traveling to the lake and mountain at any time is a sacred pilgrimage, and in Hinduism, it is believed that traveling to the sacred region during a full moon is even more auspicious. A strenuous pilgrimage covering hundreds of kilometers, Hindu’s come to view the divine mountain in order to be rid of their delusions and ignorance in life. 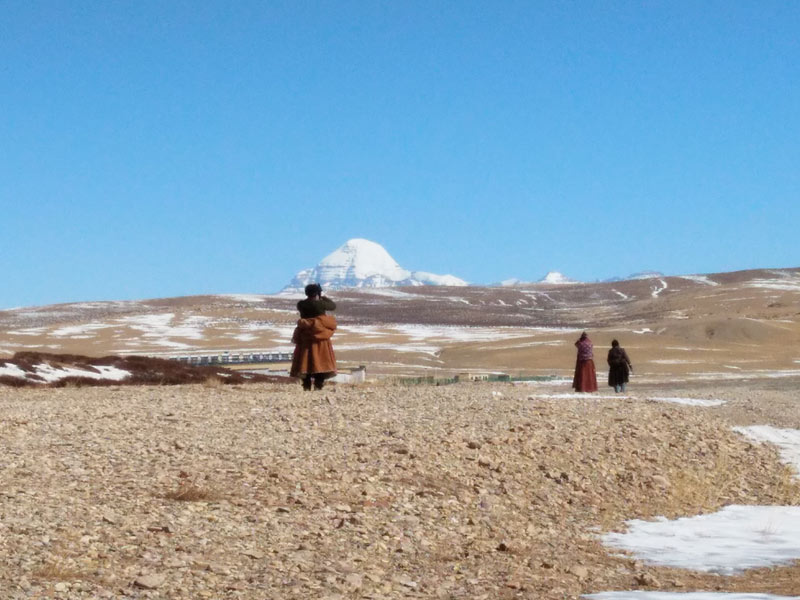 Since before the time of recorded history, Indian pilgrims have devoted their lives to the worship at the feet of Lord Shiva, and even saints and sages have undergone the strenuous pilgrimage to one of the many sites where it is belied that his power is brightest. As the abode of Lord Shiva, Mount Kailash is the most important of those destinations, and it is believed that traveling there at the full moon is equal to traveling there 100 times at any other time of the year.

The pilgrimage to Mount Kailash and Lake Manasarovar is an unusual one for many observers, as there is no temple to worship at, no shrine to leave blessings on, and no facilities in most of the area, although there are some monasteries around the kora that have accommodation available. It is believed that Lord Shiva built the mountain himself as his home and that performing the kora around the mountain is a mandatory part of the pilgrimage.

How to get to Mount Kailash

Traveling to Mount Kailash, way out in the middle of Ngari Region in western Tibet, is a long journey, which takes several days from any direction. Routes head to Kailash from Lhasa in Tibet as well as Kathmandu and Simikot in Nepal. The route you can take depends largely on which direction you are entering Tibet from, and majority tend to enter through China.

Travel from Lhasa to Kailash

The route from Lhasa to Mount Kailash is long, taking around three days to get there, normally stopping in Gyantse, Shigatse, and Saga before reaching the mountain. Traveling west, you take the G318 National Road, also known as the Friendship Highway, before heading northwest on the G219 to Darchen, the closest town to Mount Kailash. Stopping in Gyantse is optional, as it requires a detour from the main route, and you can head straight to Shigatse if you wish. Road conditions to the Kailash area have improved greatly in recent years, and are paved the whole way, with the exception of the small road leading to Lake Manasarovar. The route along the G318/G219 is the fastest and easiest route to the holy mountain, covering around 1,400 kilometers. 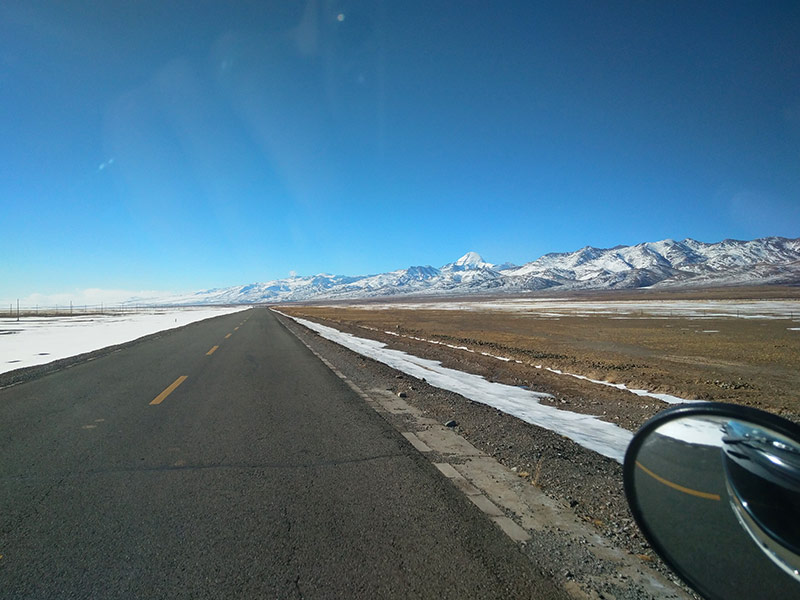 Travel from Lhasa to Kailash via G219 to Darchen

Go from Kathmandu to Kailash

Traveling from Kathmandu to Mount Kailash takes around four days of continuous driving, and is a hard route. The start of the route is often done by bus from Kathmandu to Gyirong Port, the border crossing point between Nepal and Tibet. From there, your tour guide will meet you, and you will stop over in Gyirong Town for the night, before resuming your journey in the morning. It is also useful to stop here for a day if you can, to acclimatize to the increased altitude a little.

From Gyirong Town, the road heads northwest through Saga to Paryang, both of which you will normally stop at for the night after around 7-8 hours of driving each day. From Paryang, you will then drive to Darchen, the closest town to Kailash, where you will base yourself ready for your trip to the mountain. The route from Kathmandu to Kailash is the most popular one for Indian Hindus traveling to the sacred mountain.

From Simikot in Nepal, there are two options for getting to Kailash, and both are an adventure in themselves. The first and most popular route is by taking a trek along the Limi Valley towards Hilsa, a village on the border with Tibet. At Hilsa, you will cross the bridge into Tibet and be met by your tour guide, who will transport you to Burang, where you can stop for a day or two to acclimatize to the increased altitude. From Burang, it is a day’s drive to Darchen, near Kailash and Manasarovar.

The other option and the one least used due to the huge cost is to take a helicopter trip from Simikot to Hilsa, and then a walk across the bridge to Tibet. If you are taking the helicopter flight, it is recommended to spend a day in Simikot acclimatizing at an altitude of around 2,985 meters, which is a good intermediate altitude to travel to the higher lands of Tibet. A same-day transfer to the helicopter to Hilsa will mean a huge increase in elevation in a quick time, and you run a higher risk of altitude sickness.

Both Mount Kailash and Lake Manasarovar have trekking routes around them, known locally as a kora, and in Indian as a parikrama. These routes are holy pilgrimage routes around the sacred sites, which are done as part of the whole pilgrimage, and which earn more merits and help one to attain enlightenment within your lifetime. 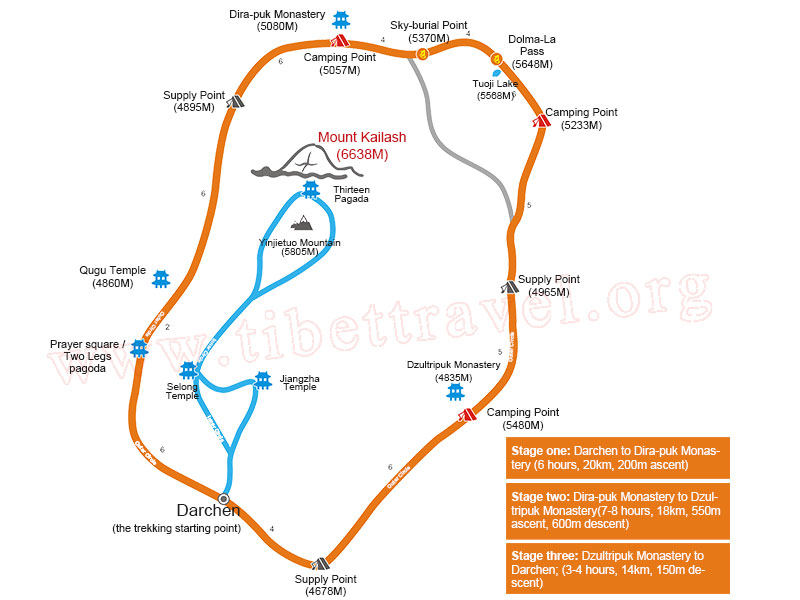 The kora around Mount Kailash is a grueling three-day trek at high altitudes of up to more than 5,000 meters, along some of the most amazing countryside valleys in the Ngari Region. 52 kilometers long, the route passes through several monasteries as it makes its way around the mountain, starting and finishing at Darchen. While it is challenging, it gives one a great sense of achievement once you have completed the circumambulation.

Similarly, Lake Manasarovar also has a kora route around it, that also takes around three days to complete. While not as arduous as the kora around Mount Kailash, it is a long, heavy trek around the shores of the lake, and often ends with a dip into the holy waters of the lake to wash away the sins of a lifetime.

The normal itinerary for a Kailash Full Moon Trekking Tour is normally around 17 days long and starts in Lhasa with a tour of the local sights of the Tibetan capital. The tour takes in Gyantse and Shigatse, as well as Saga and Lake Manasarovar, the Guge Kingdom of ancient Tibet, the full Mount Kailash Kora, and a trip to Rongbuk Monastery, the highest monastery in the world, before heading to Everest Base Camp to photograph the highest mountain in the world.

The following is a sample of the standard itinerary for the tour, which can cost from around US$ 1,880 dollars, depending on your tour dates, accommodations style, and group size.

Traveling to Mount Kailash requires several permits, and what you need to get depends on which direction you are coming from. From China, you will need the Chinese Entry Visa first, while from Nepal you will get a Group Tourist Visa instead. However, from wherever you enter Tibet, you will need the Tibet Travel Permit, the Alien’s Travel Permit, the Military Permit, and the Frontier Pass in order to get to the Ngari Region. These permits will all be obtained by your tour operator prior to you leaving Lhasa or entering from Kathmandu.

How to Avoid Altitude Sickness in Kailash Trip

Altitude sickness can strike at any time, and at any altitude above 2,000 meters. However, you can reduce the risk of altitude sickness by taking a few simple precautions. Stopping at intermediate altitudes on your way to the heights of the plateau can help to acclimatize more easily to the increased elevations. Experts recommend stopping for at least 24 hours at around 2,500 – 3,000 meters before progressing to higher elevations, and again at 4,500 – 5,000 meters before heading any higher. The physical exertion should be kept to a minimum while acclimatizing, and alcohol and tobacco should be avoided. High protein foods can help counter the effects, as vegetables, and you should eat small meals until you are more used to the higher altitudes.

Trekking around Kailash and Manasarovar is arduous, and you need to ensure you have the right clothing and equipment with you for the trek. It can get very cold in the Ngari Region, even in the summer months, and especially at night, so warm clothing is essential, as is good camping equipment if you will be camping in tents along the way. The main items to bring are: