High in the mighty Himalayas lies the ancient and mystical land known as Tibet. Often called the roof of the world due to it being entirely on the highest plateau in the world, Tibet is a popular destination for tourists and pilgrims alike, and receives thousands of visitors every year.

A part of the People’s Republic of China, there are only two ways one can get to Tibet; either through mainland China or from Nepal. The route through China can be done by either flight or train, and there are flights to Tibet’s Lhasa Gonggar International Airport from Nepal, the only location in the world that is permitted to provide international flights to Lhasa.

However, there is another way to get to Tibet from Nepal, and it is one of the most exciting and adventurous routes in Asia. The border between China and Nepal lies along the Himalayas, and Mount Everest lies directly in its path, with half the mountain in Nepal and the other half in Tibet. On that border that runs along the length of the Himalayas lies the only international border crossing between Tibet and the rest of the world – Gyirong Port.

Where is Gyirong Port?

Located over 600 kilometers to the west of Lhasa in a straight line, Gyirong Port lies on the border between Tibet and Nepal and is an important crossing point for international tourism to Tibet. Situated around 152 kilometers to the northwest of Mount Everest, and around 80 kilometers to the north of Kathmandu, as the crow flies, Gyirong Port lies in Gyirong County of Ngari Prefecture, in the far west of Tibet. 24 kilometers from Gyirong Town, the border-crossing checkpoint sits at the edge of the Trishuli River Gorge, on one end of a bridge that spans the gorge, leading to Nepal on the other side.

For many people, the way to get to Gyirong Port is by car, and from Lhasa, for the tourists at least, that is the only way to get there. Since individual travel and the use of public transport is forbidden to tourists in Tibet, all visitors from outside China must be on an organized tour, booked through one of the registered Tibet tour operators such as Tibet Vista.

Tours to Tibet must include a guide, as well as a driver and a private vehicle, since the use of public transport is prohibited. Tourists traveling from Tibet to Nepal are normally on an organized tour, and often part of a group, and will be driven to the border-crossing checkpoint at Gyirong Port by their guide and driver after the last day of their tour in Tibet.

Your guide will leave you at the immigration office on the Tibetan side, where you will be departed from Tibet, and allowed to cross the Resuo Bridge to Nepal. 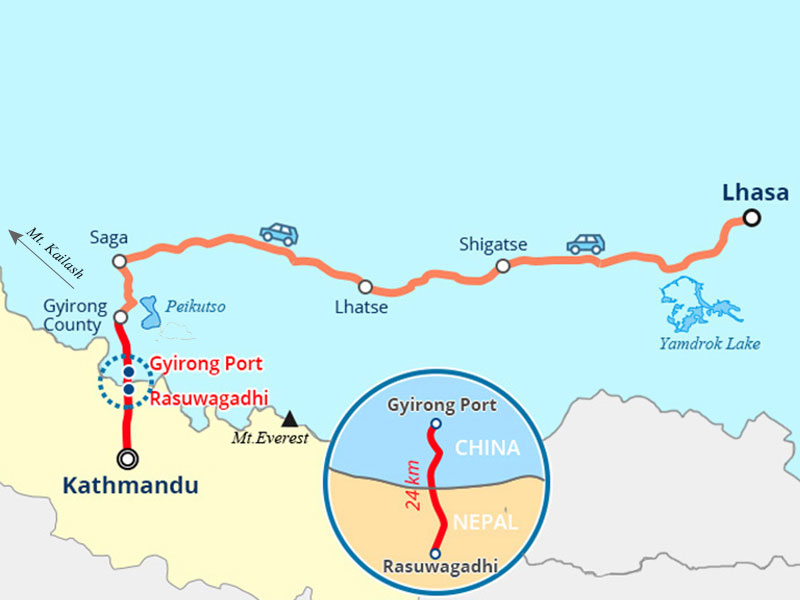 It is possible to arrange transport through the tour operator for this stretch of the journey, although this is not normally included in the cost of the tours to Tibet, and would be an additional cost. The trip takes around four hours by car, assuming there is no traffic hold up along the road, and six hours by bus, as there is a stop for a meal along the way.

Once you have arrived from Kathmandu to start your tour at Gyirong Port for the overland adventure to Lhasa, your guide and driver will meet you at the immigration building at the site, and transport you to Gyirong Town for the first night of your tour in Tibet.

A new way to travel from Lhasa to Kathmandu and vice versa is currently being constructed, and will be an extension of the current railway line that runs from Lhasa to Shigatse. The China Nepal Railway Project, which was developed as part of China’s Belt and Road Initiative, was planned after the opening of the Qinghai Tibet Railway in 2006, and so far, the tracks have reached as far as Shigatse City in Shigatse Prefecture.

The Railway was started in 2010, and the line from Lhasa to Shigatse opened in 2014, with further track laying planned for the future. According to the latest reports, the next stage of the railway, from Shigatse to Gyirong Town, is still in the planning stages, although it is scheduled to be completed all the way to Kathmandu by 2022. The proposed route will include Lhatse, Tingri, and Gyirong Town, before the tracks cross the border and head down alongside the highway to Kathmandu. No details have yet been discussed as to whether the tracks will drill through the Himalayas to cross the border, or whether it will use the existing route through Gyirong Port, as the road currently does.

Once completed, it will mean shorter travel times between Kathmandu and Lhasa, and is said to include immigration controls on the train for all passengers crossing the border from Nepal into Tibet. With lower travel times and the opportunity to carry more people across the border, the long-awaited railway is set to bring new and improved tourist trade to Tibet, as well as aiding in increasing the economy of the region’s western prefectures.

Visas and Permits for Tibet Nepal Tour via Gyirong Port

Whether you are traveling from Nepal to Tibet or Tibet to Nepal, there is always the need for passports, visas, and permits, no matter which way you go. And to make it easier to understand what papers and permits are needed, the details have been given here to give you a better idea of what the requirements are both ways.

Travel to Tibet from Nepal via Gyirong Port

If you are traveling to Tibet from Nepal, then the one thing you will not need is the Chinese Entry Visa. All tourists traveling from Kathmandu to Tibet are required to have a Group Tourist Visa instead, which is only available through a registered tour operator such as Tibet Vista.

Once you have booked your tour, the tour operator will make the application for your Tibet Travel Permit, which can take 15-20 days to process. Once they have received the permit and the accompanying invitation letter from the Tibet Tourism Bureau, an agent of the tour operator will meet you in Kathmandu at least five days before your expected date of departure to Tibet. The agent will request your original passport, and have you fill out the application form, then will take all the documents required to the Embassy of the People’s Republic of China in Kathmandu.

Processing normally takes three working days, so if the application is made on Monday Morning, the visa will be ready for collection on Wednesday, just before lunch, allowing you to leave for Rasuwagadhi Fort. The agent will deliver the visa, your passport, and the other permits to your hotel in Kathmandu prior to your departure. This will also include the Frontier Pass, the Alien’s travel Permit, and the Military Permit (if needed), which are required for travel in areas of Tibet outside Lhasa.

Travel to Nepal from Tibet via Gyirong Port

Traveling the other way, from Tibet to Nepal, also requires a lot of permits and paperwork, and again, most of this is handled by your tour operator as part of the package. The first thing you need is the Chinese Entry Visa, which you need to obtain from the Embassy of the People’s Republic of China in your home or resident country. Once you have that, your tour operator can book your tour and apply for the Tibet Travel Permit using photocopies of the passport and visa.

Processing takes the same 15-20 days as if you are traveling from Nepal, and once the permit is received by the tour operator, it will be express delivered to your hotel in mainland China in the city of your choice. Please bear in mind that it can take 4-5 days to express deliver a package across China. Once you have your permit, you will be able to book and board a train or flight to Lhasa, which cannot be done without the original copy of the Tibet Travel Permit.

Once you are in Lhasa, your guide will take your passport and Tibet Travel Permit to the local offices of the government departments for the other permits you will need. This includes the Alien’s Travel Permit for travel outside Lhasa, the Military Permit for travel to military restricted areas such as Mount Kailash, and the Frontier Pass for traveling within the region of the Sino-Nepal border, such as Mount Everest. You can then start your tour outside Lhasa to the western areas of Tibet.

Once you reach Gyirong Port, the guide will drop you at the departure office of the immigration building, where you will be checked out of Tibet, and you will cross the bridge to the Nepali side of the border. In Nepal, obtaining the visa for entry to the country can be done on your arrival at the border checkpoint, and the process is simple and should take less than an hour.

Visas for Nepal cost US$ 25 for a 15-day visa, US$ 40 for a 30-day visa, and US$ 100 for a 90-day visa, and can be paid in US dollars only at the border crossing point. The visa requires just your original passport with at least six month’s validity remaining and two blank visa pages, one passport-sized photo, and the completed application form with the fee. Once you have your visa, you can freely enter and travel round Nepal as you wish, within the constrictions of the visa. 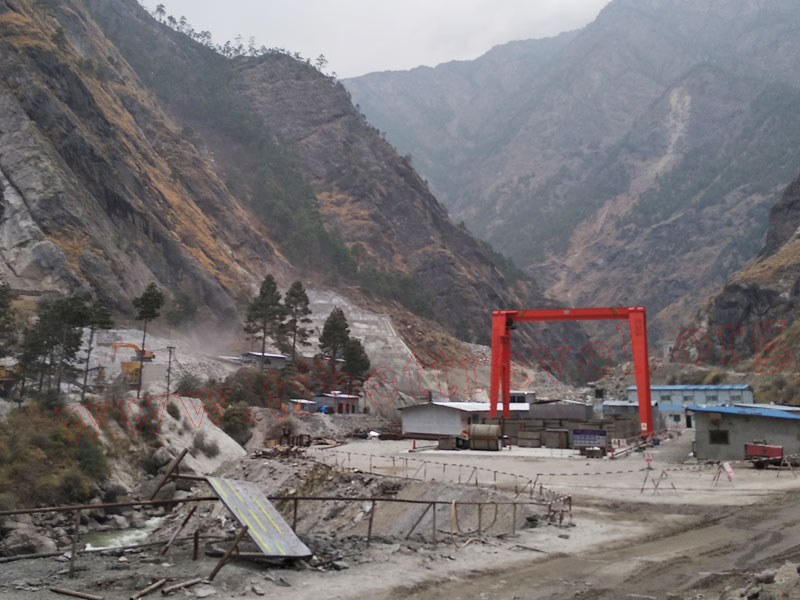 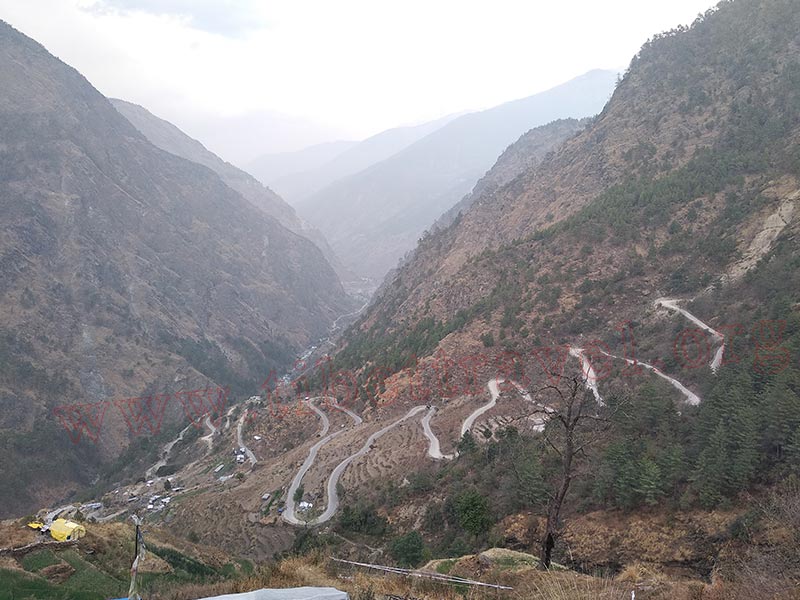 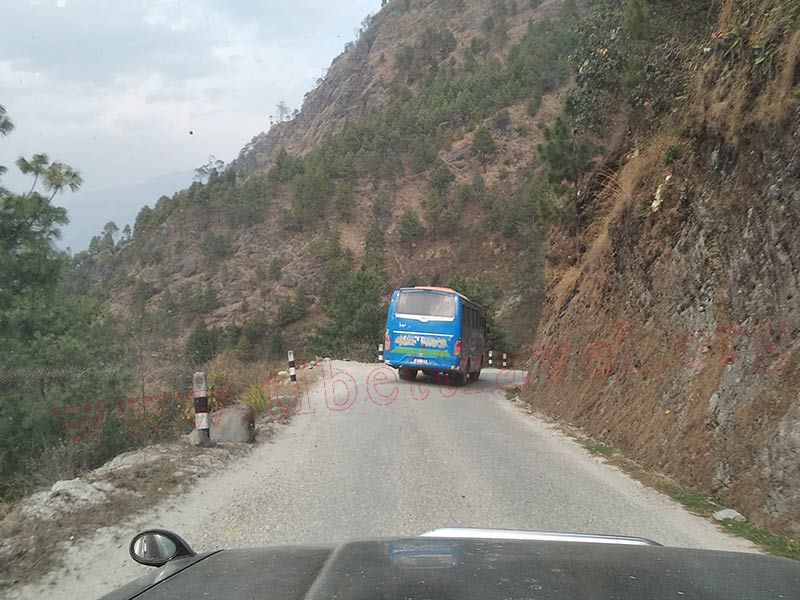 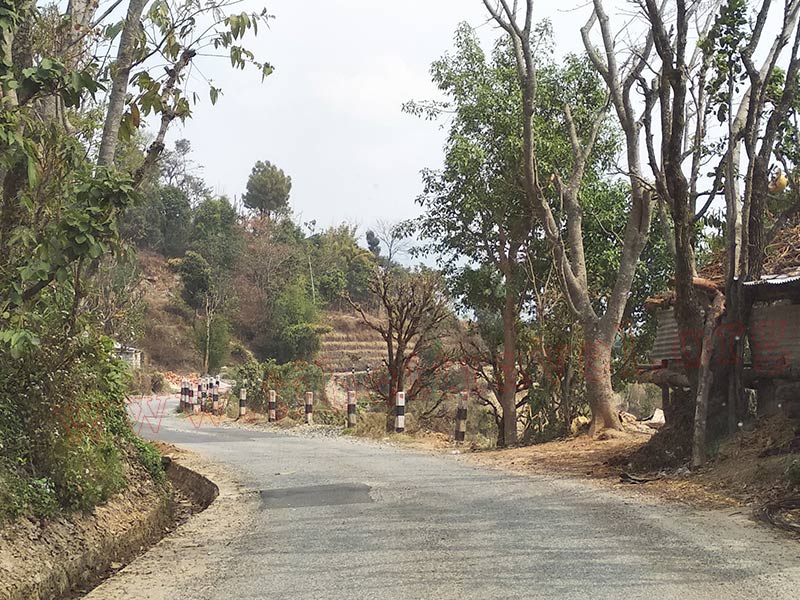 0 Comment ON "Gyirong Port, Overland Pass between Nepal and Tibet "