High up in the mighty Himalayas, on the border between China and Nepal, lies Gyirong Port, a small place that is little more than a few outbuildings on the Tibetan side of the Resuo Bridge. However, for many people, this small place is one of the most important locations in Tibet, as it is the place where they will start their tour of Tibet, the land at the roof of the world.

Gyirong Port is the checkpoint for Chinese Immigration and is where you will show your documents when entering Tibet from Nepal, before meeting your guide and driver to start your tour. On the other side of the bridge lies Rasuwagadhi Fort, the Nepali checkpoint for immigration and Visa On Arrival applications, for those traveling from Tibet to Nepal, heading for Kathmandu.

Tibet to Gyirong Port – Travel from Tibet to Nepal

Getting to Gyirong Port is important for those heading to Nepal after completing their tours of Tibet, and there are three main routes that can be taken once the tour is over. Tours normally end either in Lhasa or at a point near to the Nepal border, at certain locations that are the last point of your visit in Tibet. 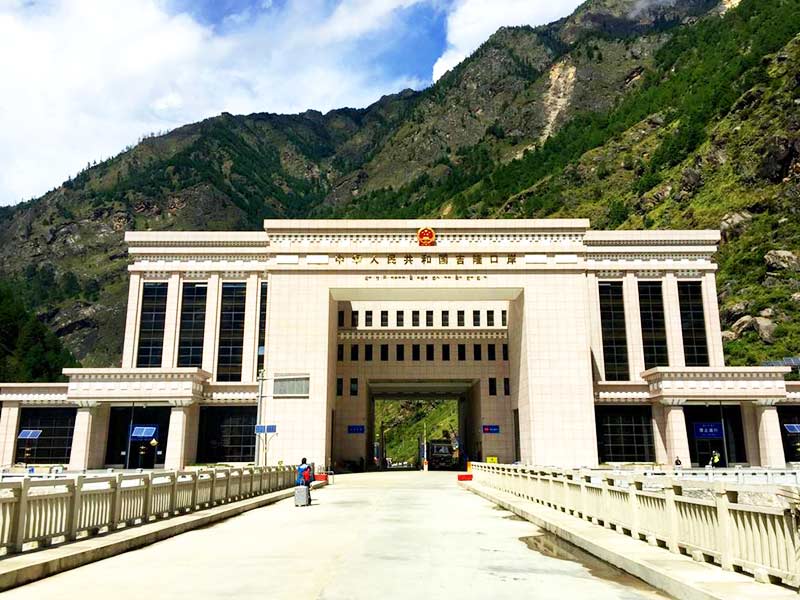 From Lhasa, Gyirong port is a drive of over 830 kilometers, mostly along the Sino-Tibet Friendship Highway, the westernmost end of the G318 National Road that starts in Shanghai and runs for over 5,000 kilometers across all of China. The route runs from Lhasa, through Shigatse, to a point just after Menbuxiang, where the route turns off to take the S214 road through Gyirong Town.

After Gyirong Town, the road turns south, and heads towards the Nepali border, through the small village of Jilongzhen, following the course of the Gyirong Zangbo River, and then the Trishuli River, after the two converge. As the road gets closer to the Nepali border, it follows along the top of the Trishuli River Gorge, which turns east again, following the border to the Resuo Bridge, and Gyirong Port. The trip takes around 19 hours of continuous driving or three days of normal travel.

Getting to the border from Mount Everest is a journey of around 350 kilometers, which normally takes just one day, although most tours stop over at Gyirong Town for the last night before you head to the border and Kathmandu. Starting at the famous Everest Base Camp (EBC), the route to the border takes you back along the small road to Rongbuk Monastery, and on to the G318 at Old Tingri.

The road then follows the G318 as far as the intersection with the S214 just after Menbuxiang, and heads through Gyirong Town, where most tours stop for the night. In the morning, your guide will take you along the S214, following the Gyirong Zangbo River and then the Trishuli River, to the border at Gyirong Port and across the Resuo Bridge to the immigration control point for Nepal at Rasuwagadhi Fort.

Heading to Gyirong Port from Mount Kailash in Ngari Prefecture is a journey in the other direction, heading southeast from the sacred mountain. The route starts just to the south of the holy mountain, at Darchen, from where you will take the dirt road to meet up with the G219 National Road. This is the faster and shorter of the two possible routes, covering only 670 kilometers, whereas the scenic route, which takes you past the many lakes of the Ngari Prefecture, including Ngangla Ringco and Taro Co, is around 200 kilometers further.

The road heads southeast, past the famous Lake Manasarovar, through Zhongba, to Saga, where the G219 intersects with the S217. The route then crosses the Yarlung Zangbo River on a small dirt road, that heads south to Gyirong Town. From there, it is a short ride of around 70 kilometers to the border at Gyirong Port, where you can cross the Resuo Bridge to Nepal.

Kathmandu to Gyirong Port – Travel from Nepal to Tibet

Traveling from Kathmandu to Gyirong Port is a journey that normally takes around six hours, and which is often done by public bus, although we can arrange your transfer to the border by car if you prefer. Whichever method you prefer, you will be taking the same route, which starts in the Nepali capital, and heads north and northwest, first stopping at Bidur, the last large town on the road to the border. The road conditions in Nepal are often poor in many outlying places outside Kathmandu and the major towns and cities, with dirt or gravel roads being the norm in remote areas.

The distance from Kathmandu to Gyirong Port

From Bidur, the small road heads north, skirting the edges of the Langtang National Park, and sometimes even entering the park area, which is mostly forested covering the foothills of the Himalayas in that region. For private vehicles, there is often a charge for entering the park, and since there is no other road to the border crossing, you will need to pay this entrance fee. For bus passengers, there is no fee, as the bus will not stop at the park area.

Heading up into the mountains, the road is narrow in places, and often only wide enough for one vehicle, which can cause a little congestion when vehicles meet in opposite directions. While the route is only around 160 kilometers long, it can take around six hours to make the trip, allowing for stops for food and drinks, as well as for allowing other vehicles to pass at wider points.

The road follows the Trishuli River that flows down from the mountains at the border, finally reaching Rasuwagadhi Fort, at the Trishuli River Gorge crossing. Once across the Resuo Bridge, which you will have to walk over, you will be taken into the immigration office at Gyirong Port for checking your documents, before being allowed to exit the building to meet your guide and driver.

The road conditions vary, depending on which side of the border you are on, and how far from the border. Although it is known as the Pasang Lhamu Highway, the road from Bidur to Rasuwagadhi Fort is mostly dirt or gravel road, with a few small sections of asphalt in places where the road has been repaired.

On the Tibetan side of the border, the road is better, with mostly paved roads from the border crossing to the town of Gyirong. A few stretches are gravel where the road has not been finished yet, although these parts are rarely a problem as the road is wide enough for two vehicles to pass easily.

The climate in the area around Gyirong Port is one of sub-tropical mountain monsoon climate, and the weather in the summer is warm and pleasant, with only a small amount of rain. Spring and summer in the area can be a lot colder, although it is still pleasant enough, and the higher altitude makes the sun feel stronger. Winter is a trying time in Gyirong Port, as the extreme cold can cause snows and ice, making driving dangerous, if not impossible. However, severe snows rarely happen here, as the altitude is not that high, being only 1,850 meters above sea level. However, it can get windy in the region around Gyirong Port, especially in the winter, which can damage skin and lips, so moisturizers and lip balm should be kept handy.

There is no accommodation at Gyirong Port itself, although there is plenty of accommodation available in the nearby Gyirong Town, 25 kilometers north of Gyirong Port border crossing checkpoint. Although the town is not big, it has recently undergone development, and is a good place to stopover, with good lodgings and convenient to the border crossing. The selection of accommodation available ranges from small 3-star hotels to guesthouses and lodges, and meals are mainly either Nepalese or Tibetan cuisine. 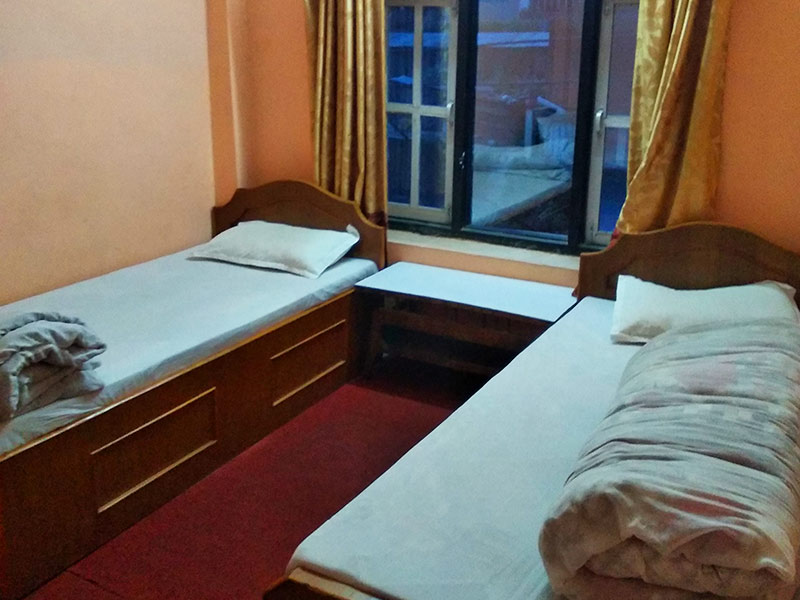 Guesthouse nearby the Gyirong Port in Nepal

While Gyirong Port is not high in the Himalayas, at only 1,850 meters above sea level, Gyirong Town, where you will be heading straight after passing through Chinese immigration, is at an elevation of around 2,700 meters. This is high enough to be a risk of altitude sickness, and care should be taken to acclimatize properly before heading on to the higher elevations you will experience on your tour.

Stopping in Gyirong Town for at least a day can help to better acclimatize you to higher altitudes in stages, making the total acclimatization easier. Rest, regular small meals, and the right foods can aid with acclimatization and reduce the risk of altitude sickness. Plenty of vegetables and small amounts of meat proteins are beneficial, and you should drink plenty of water to remain hydrated.

Altitude sickness can occur as low as 2,000 meters, and the main symptoms are headache, dizziness, fatigue, shortness of breath, loss of appetite, nausea, disturbed sleep, general feeling of malaise, etc.

If you find yourself suffering from the milder symptoms of altitude sickness, then you should inform your guide, who can monitor you as well, and you should rest and move to a lower altitude if possible. If the symptoms get worse, then inform your guide, head to a lower altitude immediately, and seek medical advice. Oxygen can help to reduce the symptoms of altitude sickness, but is not a treatment, as it merely increases the oxygen taken in, and once it is stopped the same symptoms could occur again quickly.

How to Get to Tibet from Mainland China