How to Get to Tibet from Mainland China

Tibet, the serene, calm, and beautiful region which is also known as the ‘Roof of the World’, has a reputation for being a difficult place to get to. In reality, that is not the case. Over the years the growing tourism market of Tibet has ensured comfortable travel options to tourists. Tibet is a place where history and culture are still preserved by the locals and has been less affected by urban influences. While exploring Asia, China is an ideal point from where you can jump to Tibet. One can reach Tibet by air, train, and road. Here is comprehensive information about the different modes of travel.

Get to Tibet by Train from Major Cities

When it comes to travelling to Lhasa, travelling Tibet by train is one of the most comfortable, cheap, and scenic ways to travel. The famous Qinghai- Tibet Railway is considered as an architectural marvel by many. It is the highest railways in the world. With the rewarding views like snow-capped mountains, rolling grasslands, charming villages, untouched wilderness, and crystal clear waters, choosing to go by train can give you an opportunity to see the amazing views of China and Tibet that you would otherwise miss while travelling by flight. There are trains to Lhasa from following places in China:

There are three seating arrangements in these trains: hard seater, hard sleeper, and soft sleeper. In hard sleeper cabins, there are 6 beds in one compartment. In soft sleeper cabins, there will be only 4 beds in a compartment. The trains come with facilities such as toilets, wash basins, charging points, dining car with food and drinks, etc. To avoid and overcome altitude sickness, there is a centralized oxygen supply system in the trains that activates after a certain point. There is also individual oxygen supply system under each seat.

Note: Ticket prices for Tibet train tickets usually change according to the travel date and season. Due to the limited supply of tickets, it is advisable to book at least 3 months in advance, especially during peak tourism season.

Fly to Tibet from Mainland China

Going by Tibet flight is the most convenient way to travel. They take less time to reach the destination compared to train and overland. While time is an advantage while travelling by flight, some disadvantages include missing out on some spectacular views and sudden increase in the altitude. A sudden increase in the altitude may cause mild headaches, nausea, shortness of breath etc. But worry not; these symptoms go away in a day or so. Your body adapts to the altitude quickly. 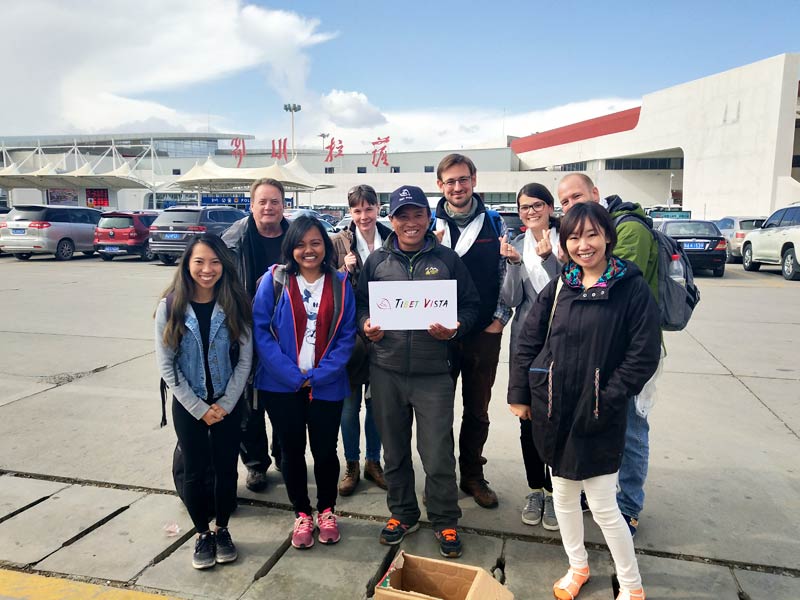 Tourists can fly to Lhasa, Tibet from Beijing, Chengdu, Shanghai, Kunming, Chongqing, Guangzhou, Xining, and Xian. Tourists can also land in Nyingchi and Shigatse in Tibet from Chengdu. Chengdu has the most number of flights to Tibet as of now.

There are flights flying from Chengdu to Tibet every day. Chengdu is also the closest to Tibet; it takes only 2 hours by flight. Available operators are Tibet Airlines, Sichuan Airlines, Air China, and China Eastern Airlines.

Beijing has 2 flights operating to Lhasa every day – one direct flight and one flight with the stopover at Chengdu. The direct flight takes about 4h 30min to arrive at Lhasa. Air China is one of the airlines that provide flights from Beijing to Lhasa.

There is one flight from Guangzhou to Lhasa with the stopover at Chongqing operated by China Southern Airlines. The flight time is about 6 hours.

Shanghai is one of the cosmopolitan cities with good global connectivity. Many foreigner tourists land in Shanghai from their native country. There is one flight operated by China Eastern Airways that has a stopover at Xian.

Kunming has direct flights to Lhasa every day operated by China Eastern Airlines, Tibet Airlines, and Sichuan Airlines. The total flight time is only 3 hours.

Chongqing has about 9 direct flights to Lhasa every day operated by Tibet Airlines, Air China, West Air, Xiamen, and Southern Airlines. The fly time is only 2h 45m.

Note: Lhasa Gonggar Airport is one of the highest airports in the world. It is located at an altitude of 3, 570m. It lies to the south of Yarlung Tsangpo River Bank. The prices of the flight tickets change depending on the month and season of travel. The tickets cost significantly less and there are offers during winter months.

Go to Tibet by Overland

Travelling Tibet by overland is one of the most adventurous ways to get to Lhasa. It is also the most expensive and time-consuming ways to travel. It requires you to be on road for more than a week which is not suitable for people who have only limited time. But every minute spent travelling on road is worth it. This is the best way to explore hidden gems, experience local culture, and converse with natives of the land. The stunning landscapes on the way are nothing short of the wonder.

This route starts in Xining and takes about 8 days to reach Lhasa. The total distance is 1,947km and the average elevation of this route is 4,500m. Here is a small breakdown of the route.

With a total distance of 2,300km, this route does not only provide amazing scenery but also an ethnically rich route. This route passes through a lot of ancient towns. Here is a small breakdown of the route.

The distance of this route is 2, 086km. This route also lets you spot some interesting wildlife along the way. Here is a small breakdown of Xinjiang-Tibet highway.

Tibet Travel Permit is a must need to enter and travel inside Tibet. All foreigners are required to get this permit prior the travel. They are arranged by your travel agency. You will be required to send soft copies your passport and Chinese visa to the travel agency you are booking with. The permit will be acquired in 5-7 working days. Additionally, you need to acquire Alien’s Travel Permit to travel outside of Lhasa. This can be obtained after landing in Tibet. The permit is checked in train stations, airports, hotels, and some tourist attractions.

These are the basic details required to travel to Tibet from China. For detailed information about tour packages, dates available, and logistical information, you can contact us for tailor-making your unique Tibet trip.

How to Travel to Tibet from Nepal

0 Comment ON "How to Get to Tibet from Mainland China"