Check how our clients are enjoying their Tibet trip
Home>Tibet Vista Blog>Guge Kingdom: Top Things to Know for This Hidden Kingdom in Western Tibet

As a hidden kingdom in western Tibet, Guge Kingdom experienced hundreds of years of prosperity but once disappeared mysteriously. The Ruins of Guge Kingdom, a large-scale palace with numerous caves, houses, monasteries and hill, is one of the most important heritage sites in Ngari that shows the prosperity and decline of the great kingdom which was founded by the descendants of Tobo Dynasty in the 10th century. Our clients were enjoying the sunset at Guge Kingdom

Nowadays, more and more tourists add this site to their trip in Ngari to explore the mysterious kingdom of western Tibet. For you, who are curious about this lost land in the far west of Tibet, here are the top things to know before you go.

The Ruins of Guge Kingdom was the capital of the kingdom established by Jide Nyimagon before the 10th century. It has a long history with a glorious past for over 700 years, but once destroyed by the war between Guge and Ladakh in 1635. The palaces were ravaged and even the royal family of Guge Kingdom were disappeared. No one knew where they were and never heard about them again. The whole kingdom was disappeared overnight. Even now, it is still an unsolved mystery in Tibet history.

Unlike the holy Buddhist monasteries and temples you’ve seen along the way from Lhasa and Shigatse, the ruins of Guge Kingdom facing the magnificent Zanda Clay forest gives you a sense of mystery and awe-inspiring feeling. Though you may confront the dizziness climbing stairs of Guge at such high altitude (3889m), you are completely drawn to the deserted caves and photogenic architecture of Guge Kingdom, two of which are the highlights of Guge Kingdom tour.

Ruins of the Palace

Inside the ancient palace, there are 879 caves, 445 houses, 28 pagodas and several tunnels leading to various directions. Among them, the caves with ancient murals are one of the most important relics of the Guge Kingdom. The murals of Guge present the legends and Buddhist stories of this ancient Kingdom that were kept for hundreds of years from which you can have a better understanding of the growth of Guge Kingdom. There are also some stone inscriptions that carved in the dusty wall of the ancient city wall. Though most of them have faded away for centuries, the remained inscriptions show a special charm of history. Besides the ruins, there are still some well-preserved monasteries presenting the religious culture that kept for hundreds of years. Exploring the caves of Guge Kingdom

The castle-like palace standing on the hill over 300 meters is not only a heritage for tourists to explore the ancient history of this mysterious kingdom but also a great place for a photography tour in Tibet.

From the outside, the overall view of the dusty palaces standing on the yellow earth hill on the banks of the Xiangquang River forms an impressive picture. Just imagine how prosperous the ancient Kingdom is from the present ruins. When you step into the damaged palaces, wandering through the tunnels, caves and houses, you can look at the ruins from the inside to the outside, seeing the great view of the river bank from the top of the mountain. 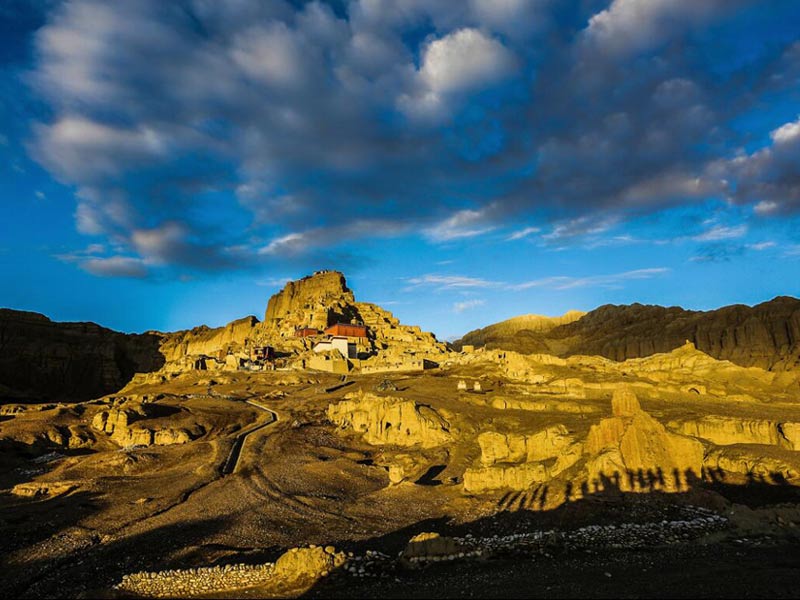 The incredible vista of Guge Kingdom at twilight

From late April to early October is the best time to visit Ngari area. The best shooting time for a Guge Kingdom tour in a day is at dusk when the whole palace, as well as the hills, is bathed in a golden sunset. If you want to take great pictures of this site, it is suggested to arrange 3 to 4 days so that you can have enough time waiting for the best picture.

The best time to visit Guge Kingdom is from May to June and from mid-September to early October when it is mil and warm. Winter is too cold to visit Ngari area, when the average temperature is just around 0℃. Spring in Ngari is still chilly with the max temperature around 10℃ in the daytime and below 0℃ at night. There is always a huge temperature difference between daytime and night. No matter when you visit the ruins of Guge Kingdom, even in summer, you need to bring the warm coat with you to keep warm at night. 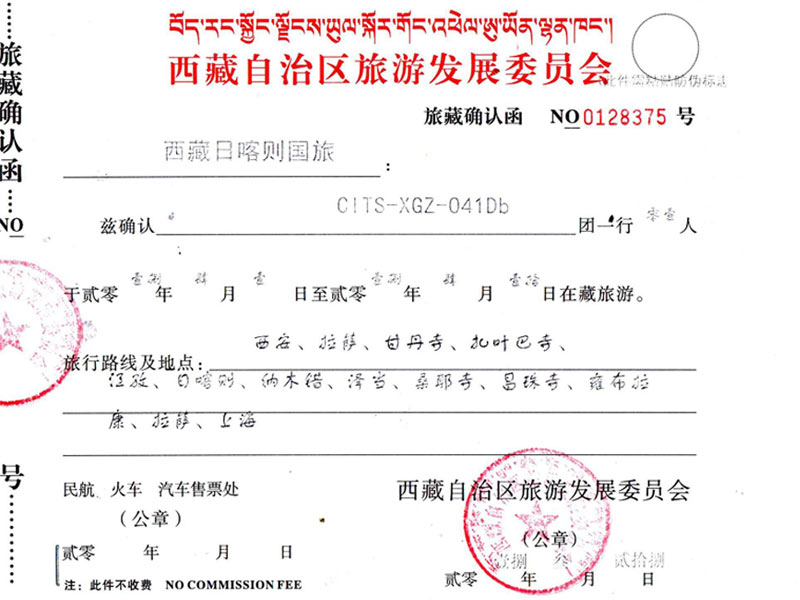 A sample of Tibet Permit

Besides Chinese Visa, another important travel document for a trip to the Guge Kingdom in Tibet is Tibet Travel Permit, which is required for all international tourists to enter Tibet. Without this Tibet Permit, you can’t even get on board the train or flight to Tibet. To apply for Tibet Travel Permit, you need to offer the scan copies of your passport and Chinese Visa to the travel agency which will provide the Tibet tour service for you.

Since the Ruins of Guge Kingdom is located in Ngari, a remote area of western Tibet, you also need to have other travel permits to visit outside Lhasa city. Generally, a classic Guge Kingdom tour takes about 17 days from Lhasa to the ruins of Guge Kingdom via Shigatse and Mount Everest region. You need to get Alien’s Travel Permit and the Military permit to pass through these areas.

It sounds complicated. However, the application process of these permits is quite simple. Once you confirm your travel schedule and book the tour with us, we will apply for all these required travel documents together. But one thing you need to bear in mind is that it takes about 15 to 20 working days to get your Tibet Travel Permit. So you should leave enough time to apply for all the required travel permits.

How to Get to Guge Kingdom

If you don’t have such a long holiday for a weeks’ trip to Guge, you can also take a flight from Lhasa to Ngari Gunsa Airport first, and then transfer to Guge Kingdom. The airport is 220 kilometers away from the ruins of Guge Kingdom. It takes about 5 hours to drive from the airport to the Ruins of Guge Kingdom. However, the downside is that the drastic altitude ascent from Lhasa (3658m) to Ngari (above 4500m) will be very likely to trigger acute mountain sickness. So, it’s not recommended for ordinary travelers, though it sounds feasible.

Dining and Accommodation around Guge Kingdom

A trip to Ngari is never a comfortable journey. In this remote area of western Tibet, you can only find local guesthouses with very simple facilities and very basic accommodation. Sometimes, the hotels may be out of power at night. The choices of what to eat are also quite limit. Most of the local restaurants just offer simple Chinese cuisine. It is suggested to bring some snack and energy food with you in case you are not used to the local cuisines. 0 Comment ON "Guge Kingdom: Top Things to Know for This Hidden Kingdom in Western Tibet"