Top Things to Do in Tsurphu Monastery An interior view of Tsurphu Temple

Tsurphu Monastery, the patriarch temple for Karma Kargyu, is the birthplace of the reincarnation of living Buddha. However, Tsurphu has more to offer than just Tibet Buddhism. In this post, you’ll find something more interesting, including Buddha relics, Tsurphu Monastery Festival, Tsurpu kora, Tsurphu to Yangpachen trek, etc. Around 60 km west of Lhasa,Tsurphu Monastery is located in the boundary of Doilung Deqen county on the upper reaches of the Tsurphu River. Built by the first Karmapa Dusum Kyenpa in 1187, Tsurphu Monastery has had a long history of over 800 years and become the representative of the Karma Kagyu Sect of Tibetan Buddhism. It was the 1st Karmapa, Dusum Khyenpa, who initiated the incarnation system of living Buddha. Since then, the leaders of Tibetan Buddhism began to pass it down from generation to generation. 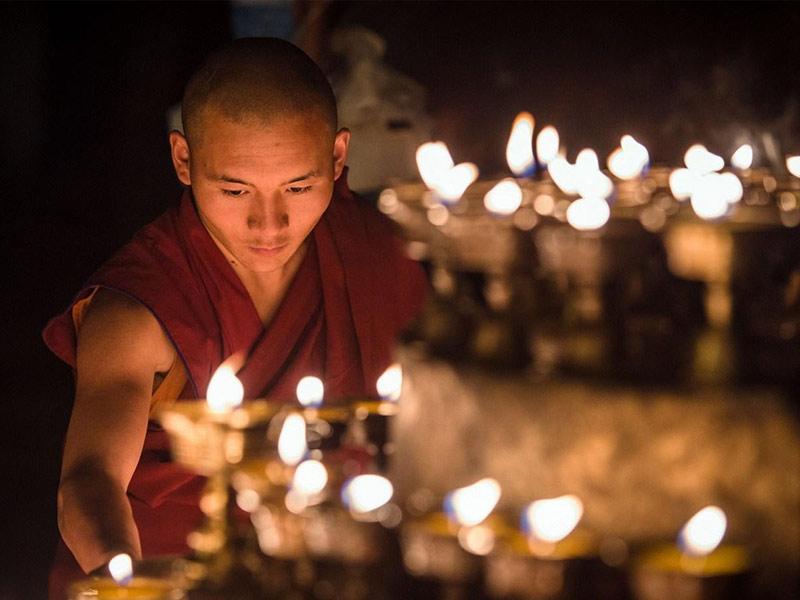 Tibetan butter lamp has derived its name from yak butter. When lighted, it would send out a pleasant flavor of natural cream. You must be touched at thousands of butter lamps blinking together to express people’s wishes to the Gods while visiting Tsurphu Temple. Besides, in the eyes of Tibetans, butter lamp is also a way for the relatives to communicate with the dead. Therefore, it’s common to see lamps illuminating day and night at Tibetan homes. According to Tibetan culture, the odd numbers are believed to have auspicious meanings, thus the number of lamps must be singular.

Sarira, also called as Buddha relics, usually refer to pearl-like or crystal-like objects found in the cremated ashes of Buddhist spiritual masters.No final conclusion has yet been reached on Sarira relics. Some people hold that it may be related with chemical reactions, happening in the cremation of the body, bones and other objects. Some think that the reason rests in the abstinence. Others believe that as long-term vegetarians, Tibetan Buddhists have taken in a large mount of vitamins and minerals, which then deposited in the body as crystals. However, this theory is untenable since it does not happen to other countless vegetarian in the world. 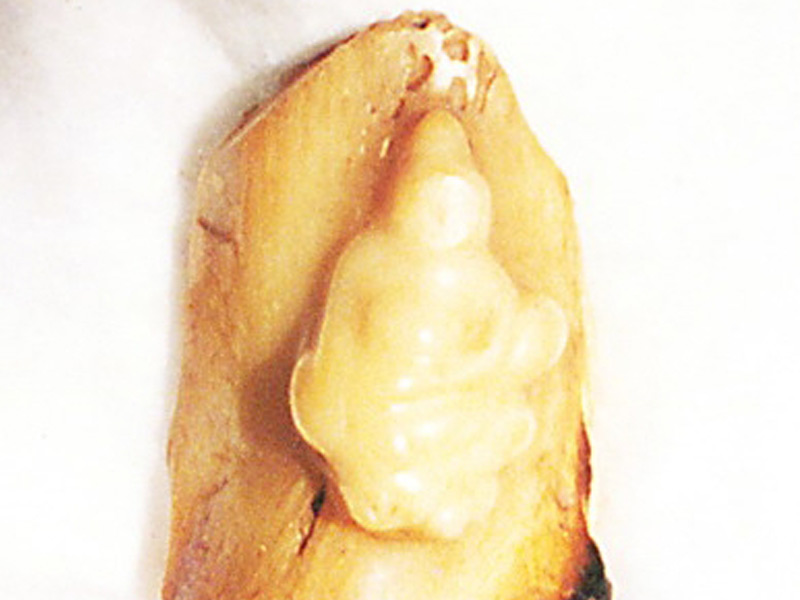 A statue of Buddha formed on the sarira naturally.

Tsurphu Monastery is home to a large number of cultural relics and valuable jewelries, among which the most precious is the sarira of the 16th Karmapa. In 1981, the 16th Karmapa passed away at abroad and left numerous relics after cremation. The sarira of his leg bone had been brought back to Tsurpu Temple. Several years later, an amazing thing happened. A statue of Buddha appeared on this sarira. It’s a natural formation and no one can explain this unique phenomenon so far. 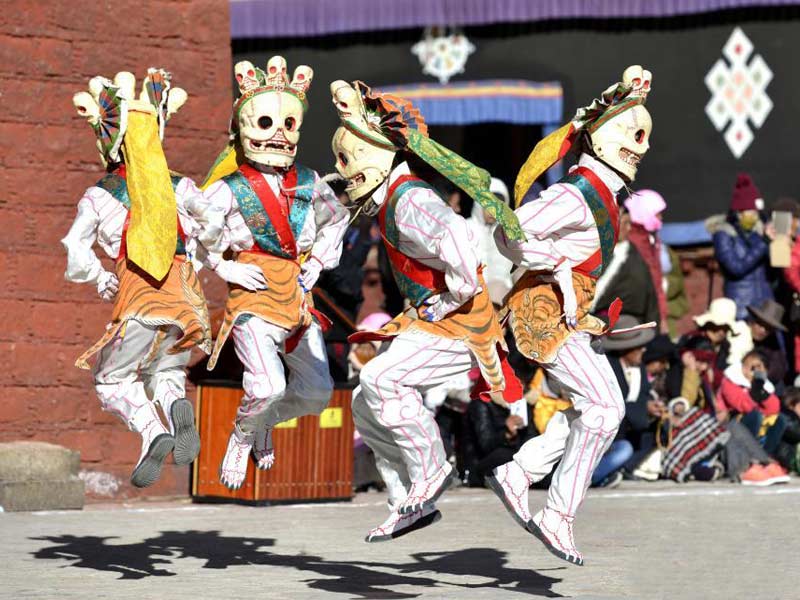 Tsurphu Monastery Festival falls on the 10th day of the forth month in Tibetan Calendar. It’s celebrated to commemorate the great Indian guru Padmasambawa who came to Tibet and devoted himself in promoting Buddhism. During Tsurphu Cham Dance Festival, you can try some Tibetan barley beer and observe some other religious activities, like grand dharma assembly, Buddha exhibition, etc.

The Tsurphu kora, a walk of around 4 km, is quite taxing if you are not acclimatized to the altitude. It ascends 150 meters, past springs, shrines and meditation retreats, providing splendid views of Tsurphu below. If you want to see more, you can follow the kora, taking the track from the west of Tsurphu. The track leads up to a walled garden. On the way, it also past walls of many stones. There is a sky burial site. 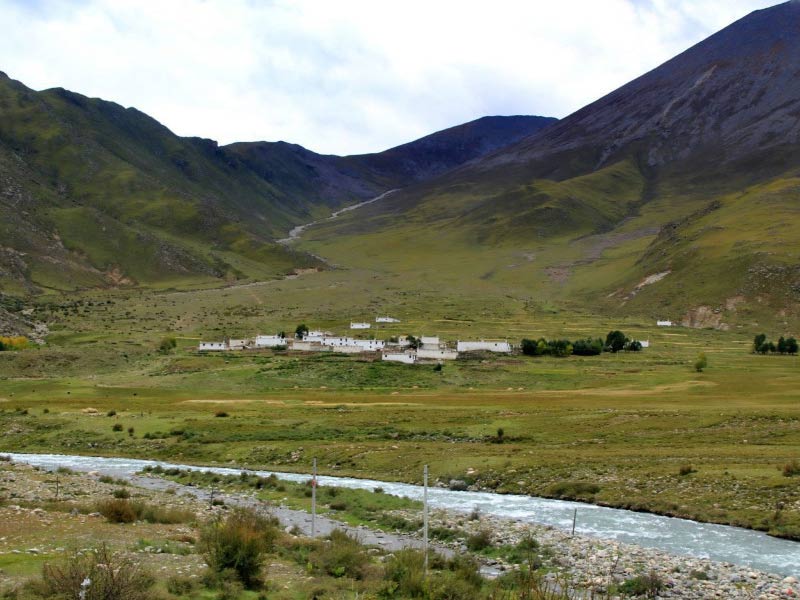 And you can also follow the cairns that go up the hill to a small pass marked by prayer flags. Here you can see all the the colorful flags dancing with the winds in all directions, just on the ridges above the monastery. And finally, you can go up to the Samtenling retreat. It is recommended that you pay a visit there before descending eastward. Because after the descending, you will go into a gully locating to the chorten at the northeastern corner of the monastery.

After visiting all the sites at and around Tsurphu Monastery, trekking from Tsurphu to Yampachen will add more interests to your trip. This rugged walk cross several high valleys before emerging into the broad and windswept Yampachen valley. The best time to do Tsurphu to Yangpachen trek is from April to October for the blooming wildflowers and flourishing grass. If you are interested in Tibet trekking and Buddhist monasteries, why not catch the time to join our 9 Days Tsurphu to Yangpachen Trek? 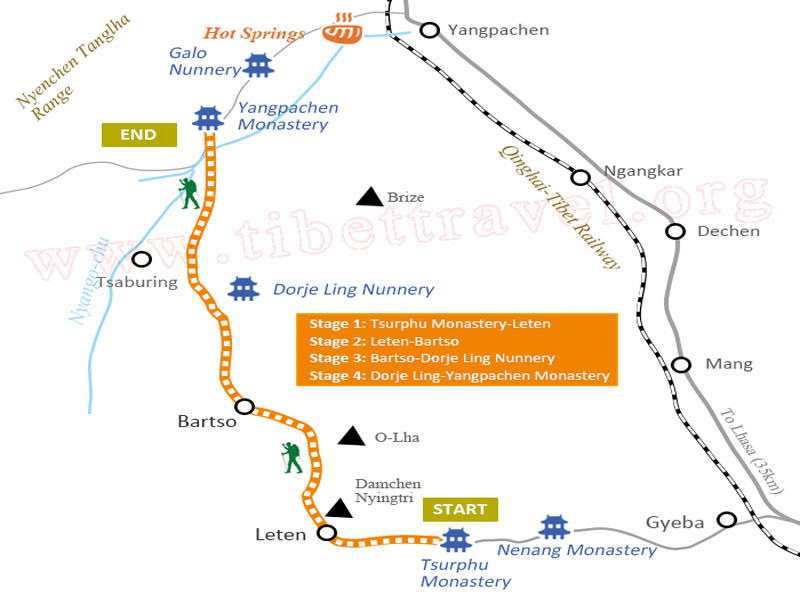 Day 1: Arrival-Lhasa (3650m)
Transfer to Lhasa downtown after arriving in the Lhasa Gongar airport or the Lhasa train station. Have a rest in Lhasa to acclimatize the high altitude.

Day 4: Lhasa/Tsurphu Monastery[4500m] (79km, 2-3hrs drive)
It takes several hours to drive to Tsurphu Monastery from Lhasa, including 2 hours bumpy road from the main road to Tsurphu, so the 4WD is necessary. The altitude will be up to 4300m and it takes half a day to acclimatize for the following trekking. Tourists will visit Tsurphu Monastery after lunch.

Day 5: Tsurphu Monastery/Leten (trekking 4 hours, 11km)
The first day trekking takes only 4 hours, 11km, by walking along a green valley crisscrossed with mountain streams. You may also stand on the lookout for various species of mountain goats disguised in gray rocks. Several small nomadic communities camp here for the summer herding months, and you may have a stop into a yak-hair tent for a cup of salt butter tea or some fresh yak milk! You will walk on a high plateau with a scattering of rock-enclosed huts, and look for a flat area for camping. From day one, the scenery becomes breathtaking, while the landscapes feature typical Tibetan beauty.

Day 6: Leten/Bartso (trekking 5-6 hours, 15km)
Today, you will walk along a long big valley, up to the highest spot Lasar La(5300m). Have your first small pass, the Damchen Nyingtri, bear to the left at the cairns at the crest, and descend into a magical valley of lichen-coated boulders, meandering streams and expansive, powder-blue sky. Three hours later, you will cross the Lasar La(5300m) and descend into the Yangpachen valley, with its wide open plateaus, spiky grass hummocks and tundra-like parched, cracked patches of earth, and head towards Bartso. The views of Brize (translated as female yak herder) and Tarze (horse keeper) are superb, and you will feel safe in the care of the local mountain god, Nyenchen Tanglha. Camp near Bartso, a drokpa (nomad) village of five or six houses, surrounded by the juniper used for incense all over the Tibetan world.

Day 7: Bartso/Dorje Ling Nunnery (Trekking 4 hours, 15Km)
Leaving the village of Bartso behind, head towards a wide trail leading across the valley and over another ridge, from where you will be rewarded with views of Nyenchen Tanghlha (7111 m), the holiest mountain in central Tibet. Then you merge at Tajung village, and then climb gently up rolling hills where young nomadic boys and girls picnic on the plateaus as they watch their yaks and sheep graze. The vistas are, again, just amazing! Mid-day, you should reach the small Djore Ling Ani Gompa (nunnery), near which you will set up camp. It’s possible that these nuns, some of the friendliest in Tibet, will drag you into the gompa’s tea-house and pass around a heaping plate of yak meat (use the bowie knife provided to hack a piece off) before getting into the requisite photo session.

Day 8: Dorje Ling Nunnery/Yangpachen Monastery/Lhasa (trekking 4 hours, 14km)
Today walk for three or four hours, following the ox-bow Nyango Chu River snaking its way through the grassy valley, and head for Yangpachen Gompa. This old Kagyupa monastery, with Tibetan mastiffs keeping guard, overlooks part of the Trans-Himalaya range. Landcruiser will wait for at monastery, pick up to have a hot springs at Yangbachen, then drive back to Lhasa.

This trek is a nicely balanced combination of Tibet culture and outdoor activities, with alpine tundra, mountain panoramas, ancient monasteries and a remote nunnery. If preferring to stay longer in Tibet, you can extend your Tibet tour and pay a visit to Everest Base Camp, Mount Kailash, etc.

Top Six Reasons Why You Should Visit Tibet

0 Comment ON "Top Things to Do in Tsurphu Monastery"