Ngari region in the western Tibet is the horizon of the sky for Tibetans. The region also has a very high spiritual important as the holy Mount Kailash here is believed to be the centre of the world and the Lake Manasarovar is considered to be the mother of all holy lakes. Ngari was once the heart of the ancient Kingdom of Guge, an ancient kingdom in Western Tibet. Thus, the area is a place where you can truly experience Tibet civilization. And nothing can make you fully experience Tibet civilization and the magnificence of western Tibet more than the big loop tour around Ngari region. Paying a visit to holy Mount Kailash in Ngari, Tibet

The vast and sparsely populated wilderness of Ngari presents a very difference picture than the rest of Tibet. This is a place where you can come across the ruins of long lost civilization of Guge Kingdom, a magnificent wildlife, sacred lakes surrounded with snow-caped mountains and pilgrims drawn to this holy land in vast numbers.

Big loop tour of Mount Kailash and Lake Manasarovar in Ngari starts from Lhasa and takes around 19 days. Along the tour, you will see many great attractions. Here, we have listed the top 9 of these attractions.

Potala Palace is one of the most beautiful buildings on the planet and it has a fantastic view of Lhasa. This incredibly beautiful structure is probably the most recognizable building in Tibet and is visited on the second day of your big loop itinerary.

Potala Palace was once the residence of the Dalai Lama until the 14th and current Dalai Lama fled to India after 1959 Tibetan uprising. The palace is named after Mount Potala, the mythical abode of the bodhisattva Avalokiteśvara. Its construction started in 1645 and took 3 years. 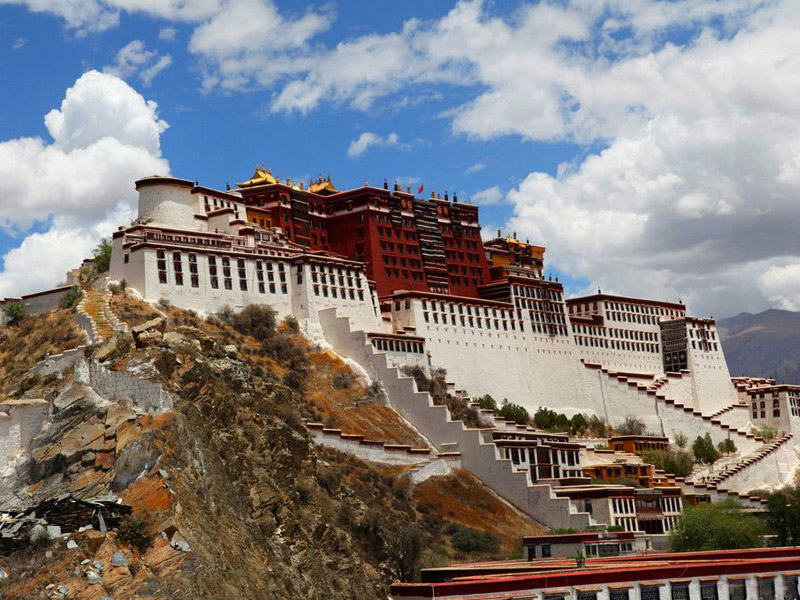 With over 1,000 rooms, Potala Palace contained the living quarters for Dalai Lamas and houses great amounts of rare cultural relics including hand-written golden Buddhist scripts. The palace is 14 stories tall and the visit involves climbing a great deal of stairs up and down. Since this will be your second day in Lhasa for acclimatization, try not to climb to fast (or you may risk high altitude sickness).

Like mountains, lakes are considered sacred by Tibetan people.They are believed to be the dwelling places for protective deities. This is also believed to give these sacred places a spiritual power. 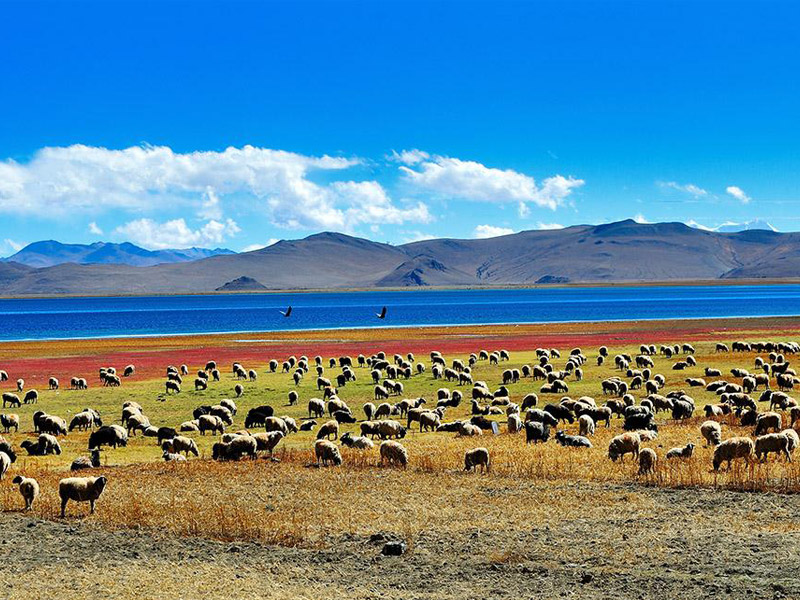 Yamdrok Lake is a very beautiful lake with blue waters surrounded by snow-capped mountains.The lake is on Friendship Highway S307 (the highway connecting Nepal to Tibet) and you can have a panoramic view of the lake from the road.

Founded in 1447 by the 1st Dalai Lama,Tashilhunpo Monastery is one of the most culturally and historically significant monastery in Tibet. It is located in the second largest city of Tibet, Shigatse, on a hill in the centre of the city. The monastery is the traditional seat of successive Panchen Lamas, the second highest ranking tulku lineage in the Gelug tradition of Tibetan Buddhism.The current structure is actually one third of the original monastery since the rest was destroyed during cultural revolution. But fortunately, the remaining part is the main monastery and today, it is a significant cultural as well as spiritual center. This is one of the two Everest Base Camps (the other one is in Nepal) and used to climb the northern face of Everest. Climbers typically rest at base camp for several days for acclimatization to reduce the risks and severity of altitude sickness. 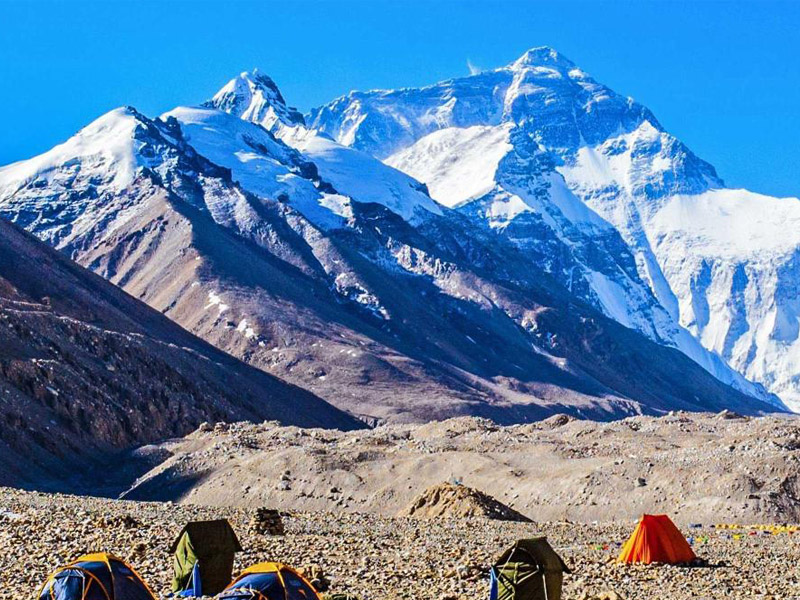 A trip to Everest Base Camp is once in a lifetime experience where you will witness the mountaineers preparing to scale the tallest mountain on the planet. It is at an altitude of 5200m so beware of high altitude sickness.

Unlike the Everest Base Camp in Nepal, the camp in Tibet can be accessed by motorized vehicles, at least in the summer. The Big Loop Tour takes its participants to the Everest Base Camp by riding along the new zigzag road. If the weather conditions are good and you can arrive the location on time, sunset over gigantic Everest Mountain is a spectacular experience. Lake Manasaroveris located at 4,590 m elevation and is world’s highest fresh water lake. The lake and its surrounding area is stunningly beautiful. The scene from the southern shores is combined with Mount Kailash and offers a fantastic daytime and night-time view.

Mount Kailash is referred as the centre of the world in ancient texts and is considered sacred by Hinduism, Tibetan Buddhism as well as Jainism. During the Big Loop tour, visitors pass by the holy Lake Manasarover and finally arrive at the southern foot of Mount Kailash, the most holy mountain in Tibet. The name Kailash means “precious jewel of eternal snow”.
The mountain itself is spectacular; it is a great mass of black rock soaring to over 22,000 feet (6714m) and dominates the entire region’s landscape. Ancient Guge Kingdom of Western Tibet was once ruling vast area around the region after 10th century AD. Today, ruins from this long-lost kingdom dot the plains and mountains in Western Tibet, especially around Tsamda county. The county capital, Toling, was once the religious center of the Guge Kingdom and the Tholing Monastery here is a must visit with its many ancient, precious, and well-preserved frescoes. Guge Kingdom lasted for 700 years and left a good number of ruins around the region. 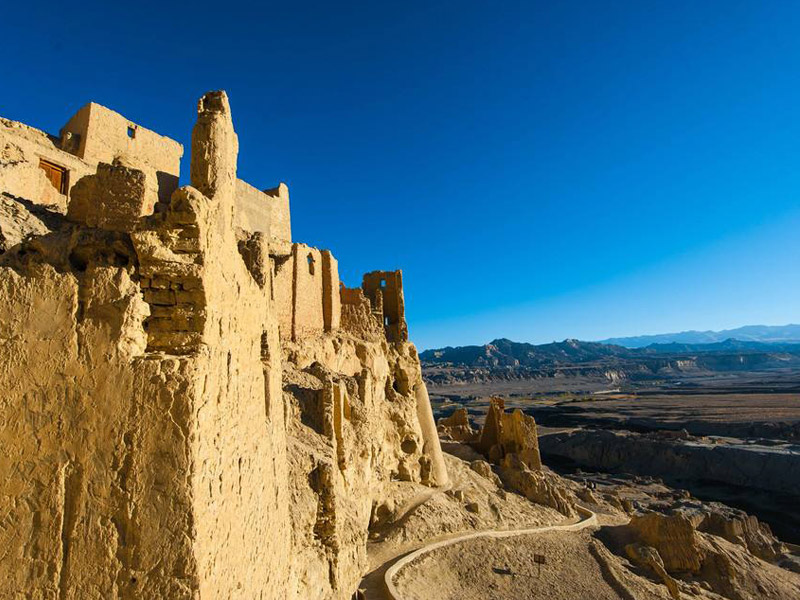 The most beautiful time to appreciate the beauty of these canyonlandsis during sunset when the whole Earth Forest turn into golden colour. Located in Zanda County, Zhada Earth Forest National Geopark extend for hundreds of miles and there you can see the Guge Kingdom ruins.

Namtso Lake is the largest lake in the Tibet. Namtso means “Heavenly Lake” and has a magnificent view of the surrounding mountains over its turquoise waters and especially offers fantastic sunrise and sunset view.Namtso is one of the holy lakes and like Yamdrok Tso Lake is one of the four “Great Wrathful Lakes” guarded by the goddess Dorje Gegkyi Tso (the other two are Lhamo La-tso and Manasarovar). 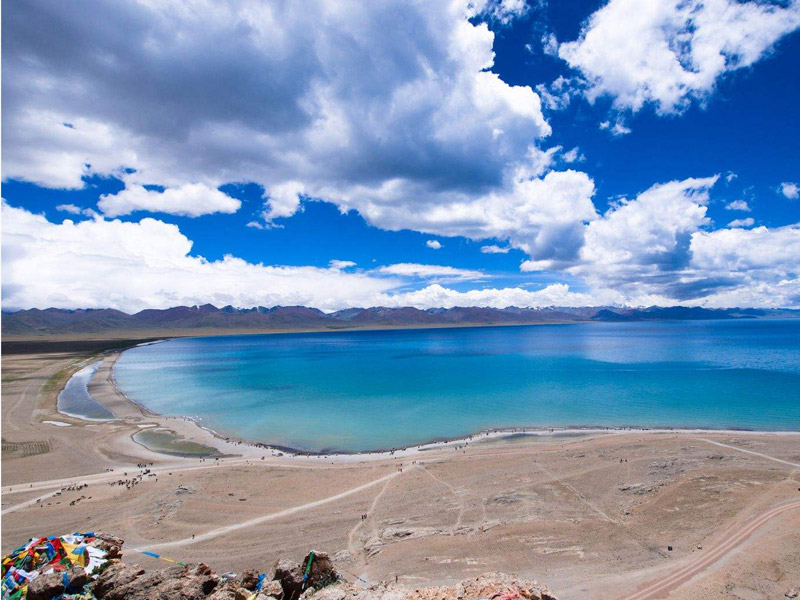 This saltwater lake is Surrounded by Snow-capped mountains and open grassland, dotted with yak herds and local nomads. It offers a stunning view as well as a lot of opportunities for taking good nature photographs.

Namtso Lake has five uninhabited islands of reasonable size. Like the hills around the lake, these islands have been used spiritual retreat by pilgrims who walk over the lake’s frozen surface at the end of winter.

Check for the detailed itinerary of the big loop tour of Tibet.