How to Travel Sichuan, Yunnan and Tibet in Just One Go

To reach Tibet overland routes are the best options for travelers with adventurous spirits as they present you one of the most precious travel experience of your lifetime. However it must be mentioned that it demands a determined body and mind, enormous time and adequate cost from the traveler. Sichuan-Tibet Highway also known as Kangding-Tibet Highway starts with Chengdu in Sichuan and ends in Lhasa in Tibet. The route offers some of the finest views like high mountains, lakes, passes as well as forests. However several parts of the route are considered dangerous.

It starts right from Golmud in Qinghai and stretches to 1160 kilometers. This is the only route which offers a bus service to reach the main road to Tibet and hence it is often considered to be the best option by many tourists.

Starting from Lhasa this 750km long route continues till the defense highway, Kathmandu. Scenes falling along the route are breathtaking with the precious view of Everest and Qomolangma.

This route starts from Xiagunan in Yunnan and terminates at Markam in Tibet the length being 800 kilometers in total. Notably this is the prime route between Yunnan and Tibet. It also crosses different eye-catching natural sites as you travel through it.

This is the longest route of all which begins with Yecheng, Xinjiang and finishes at Burang, Tibet. The 2743 kilometer route meanders through five soaring mountains and provides the travelers with outstanding views of Lake Manasarovar and Mount Kailash.

Following is a detailed route path indicating where to start from and where to reach one after another and finally where to end at last. Following the same will enable you complete the entire tour in the most convenient way and will also help you to get the best out of the tour. So here is it:

Daocheng and Yading are actually two separate places however they are generally put together in a travel plan by tourists. Daocheng is a county in Garze and Yading is village belonging to Daocheng County. Both the places are remarkable for stunning landforms and natural sceneries. 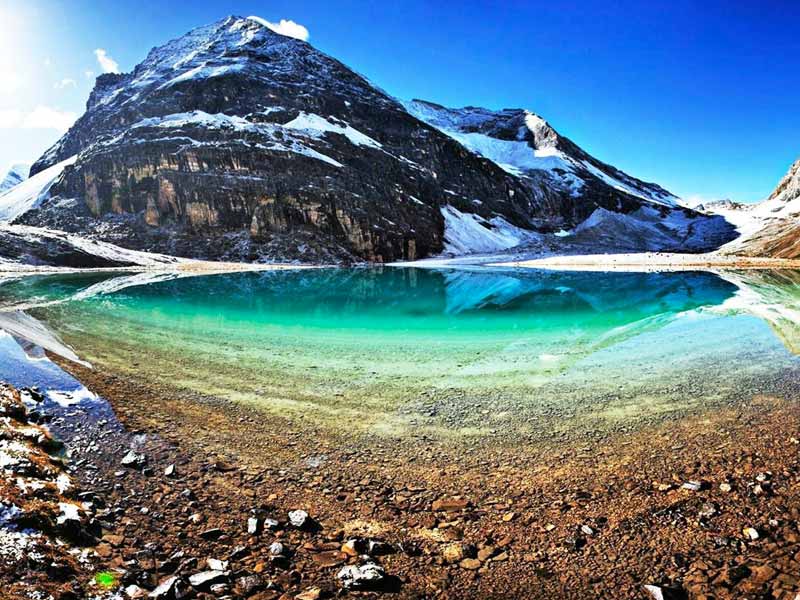 The holy mountains namely Chenrezig, Chenadorje and Jampayang along with the turquoise lakes such as Milk Lake, Pearl Lake and Wuse Lake create a splendid beauty in Yading. Moreover there are several exquisitely beautiful snow mountains as well. There is a large nature park in Daocheng which is also full of natural beauties.

Meili or Mainri Snow Mountain is a beautiful mountain range in Yunnan. It is encircled by two rivers Mekong and River Salween. The highest peak of the range is Kawagebo located 6740 meters above the sea level. It is considered a very sacred place by the Tibetan Buddhist. 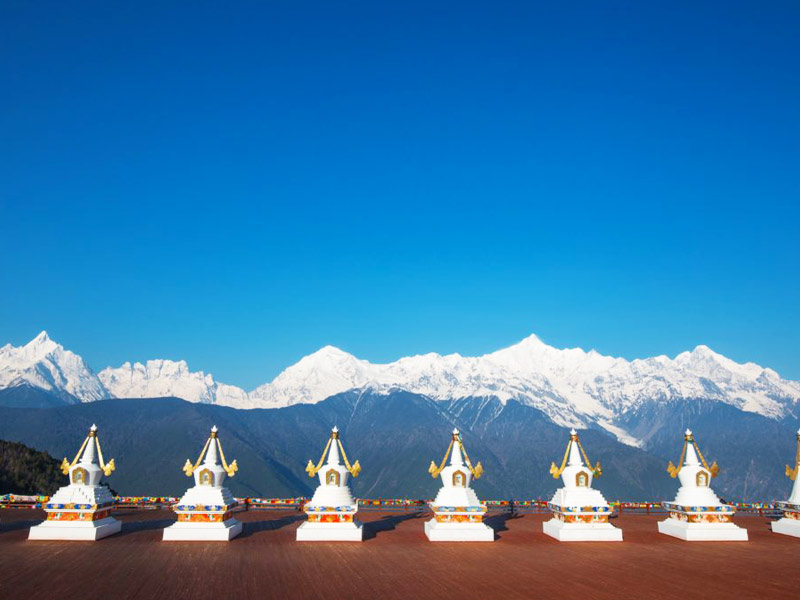 Mianzimu, Jiariren-an and Cogar Lake are also some of the significant peaks. But because of the dangerous conditions there are restrictions to summit these peaks. In fact it has claimed several lives earlier in 1991 when an attempt was made by some native and foreign mountaineers to explore the peaks.

Ranwu Hu also known as Rakwa Tso is a charming lake in the Chamdo Prefecture in Tibet, China. The lake stretches to a large area with an elevation of 3850 meter. It was actually created by the waters from a landslide dam. River Parlung flows from this very lake. Due to its excellent serene beauty it is a very popular tourist destination in Tibet. Located on the sides of the Sichuan-Tibet Highway this great forest is one of the best point to view the Namcha Barwa. Elevated at 3700 meters it is a plateau-mountain-meadow which stretches up to 15 kms in length. 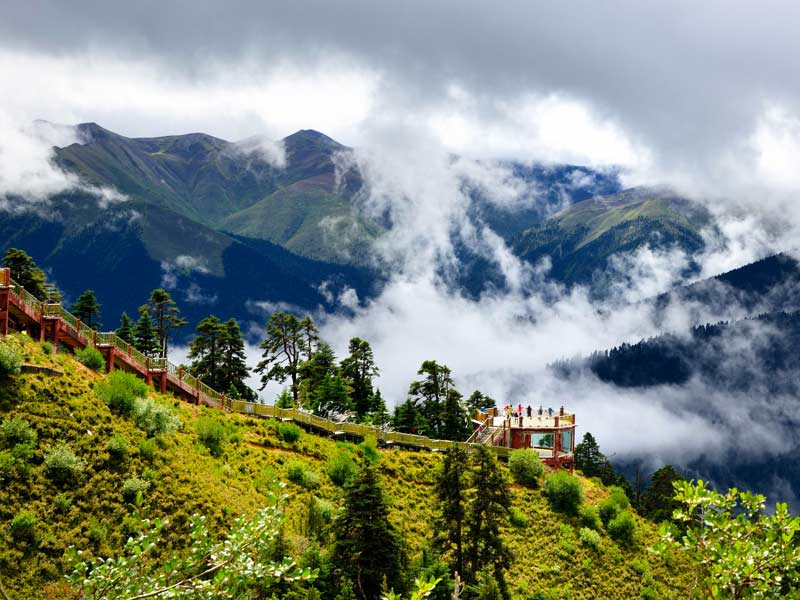 In spring it assumes an exceptionally fascinating appearance with various colorful azaleas. In autumn all the leaves in the forest except for evergreen pines turn yellow creating a unique beauty of its own. Again in winter when snows cover up the trees you get to see another beauty of Lulang forest. Moreover the clouds over the forest change their shapes very frequently as if to entertain the onlookers.

Nyingchi also called Linzhi is a small prefecture-level city in southeast of part of the Tibetan Autonomous Region. The city notably contains Yarlung Tsangpo Grand Canyon and the world famous Namcha Barwa Peak both of which are extremely popular tourists’ attractions. It also comprises the beautiful Basum Lake surrounded by a natural area with diverse wildlife such as leopards, musk deers, bears and most importantly Tibetan snow lions. The place also has a sacred monastery named Burqug Lamaling on the lower banks of River Nyang.

Lhasa which means “place of the gods” is a fascinating city belonging to the Tibet Autonomous Region in China. Standing on an altitude of 3490 meters it is one of the highest cities on earth. It is also the administrative and religious capital of Tibet. The city contains several culturally significant sites such as Jokhang Temple, Norbulingka Palace and Potala Palace all of which fall under UNESCO World Heritage Sites. Moreover the Tibet Museum situated in Lhasa is a first modernly equipped museum in Tibet with a collection of over 1000 artifacts belonging to Tibetan art and architecture.

When to Travel Overland to Tibet

The time between May to October excluding July and August seems the best for traveling to Tibet overland because the weather during this span remain pleasant and safe with average temperature being around 10 degree or so. There are least chances of rain as well. Moreover the oxygen content in the air remains on the higher side which proves beneficial in high altitudes. And during this time you are very likely to have a clear view of Mount Everest which remains hidden behind clouds rest of the time. For all these reasons the place is visited by most of the people during this period.

What to Pack for Tibet Overland Tour

Unless you are to trek in Tibet large backpacks are not needed and recommended. A wheeled duffel bag could be the best option. In overland journeys your luggage will be kept in the backside of the vehicle and hence you will not be able to access them whenever you wish. So keep a small backpack along to carry and avail essential things which you might require any time such as water bottle, camera, snacks, few medicines and other necessary small items. 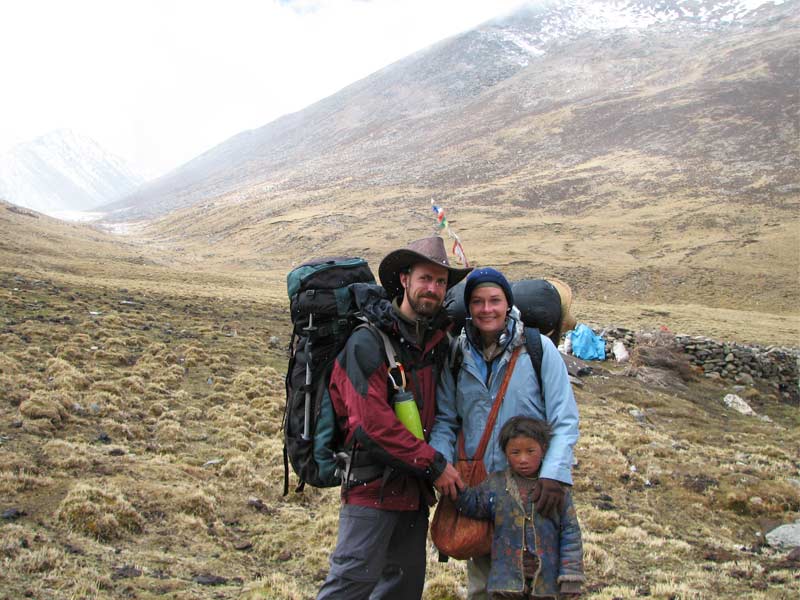 The weather in different parts of Tibet largely varies. Moreover the temperature tends to differ at different times in a day. You are likely to experience a wide temperature variance ranging between 0 degree and 20 degrees in different areas and you must stay prepared for that.

So multi-layer clothes (which let you add or take off layers) are a good option in places like this. In addition some of the most essential things to be taken are hiking pants, winter coat, thermal underwear, warm hat and gloves, woolen socks, small thermos and of course some essential medicines.

High altitude sickness could be fatal for Tibet travelers. Therefore take it very seriously and have enough preventive measures. Next comes dry air and to cope with that you must carry adequate amount of drinking water and juicy fruits along. Also keep a powerful sun screen at hand because you will be exposed to strong sun radiation which can seriously damage your skin and invite severe skin problems. It is difficult to find a doctor or clinic around in remote areas of Tibet. So always carry a first aid box along with medicines for common problems such as cold, diarrhea etc. so that they cannot spoil your travel experience.

Finally this Sichuan, Yunnan and Tibet tour requires a strong physique and an unflagging determination on the part of the traveler as it involves a number of hassles such as harsh weather conditions, high altitude problems, road-risks as well as different unpredictable dangers including natural calamities. Therefore you should not include any child member to this hazardous tour as they are not physically and mentally suitable for undertaking this kind of adventures.

0 Comment ON "How to Travel Sichuan, Yunnan and Tibet in Just One Go"