Enjoy the superb view of Mount.Everest from Rongbuk Monastery

Shaped like a giant pyramid sticking up out of a massive range of high mountains, it stands a clear head-and-shoulders above its nearest neighbors, and can be seen standing tall from many miles away. Covered with snow all year round, this tremendous peak is every serious mountaineers dream climb, although it has seen the deaths of over 200 people in its short, mountaineering history.

One of the remaining mysteries of Mount Everest is the unique formation of clouds that hang from the peak. A permanent feature of the mountain on clear days, these “flags” appear in a variety of shapes and sizes, but are always attached to the peak of this mightiest of mountains. This breathtaking “Flag Cloud” is as famous as the mountain itself, and has been the subject of millions of photographs from explorers and tourists to Tibet’s Everest National Park, and the world famous Tibetan Base Camp. The natural phenomenon has been documented repeatedly, and since the cloud’s shape and direction change depending on the wind direction at that height above sea level, it is known as the world’s highest weather vane.

The cloud formations have a variety of shapes and sizes, and many indicate different weather and wind patterns. In this high mountain region, the shape of the cloud is closely related to the changes in the local weather. Majority of the time, the clouds are pointing out to the east, blown in that direction by the prevailing westerly winds. 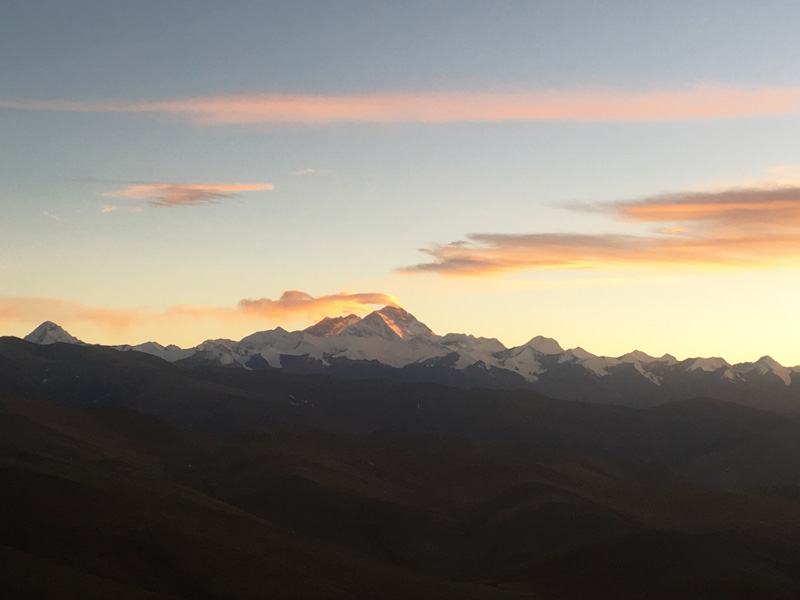 These strange flags are formed in many shapes, from thin pennants that flutter in the breeze to broad, billowing flags that extend for miles from the peak. At times the clouds can look like a huge wave breaking against the side of the mountain, as the cloud is blown from the peak, and attaches itself to the side of the mountain. And at other times it appears as a wisp of thin, graceful smoke that drifts gently from the top of the mountain, like smoke from a chimney. Another formation actually makes the mountain look like a smoking volcano, as the cloud spreads out in an increasing, sideways cone, dragging snow up into its midst and adding to the volume of the spreading, volcanic cloud. Appreciating flag-clouds at Everest Base Camp

There has been only a little study of this phenomenon, as the mountain is not the most hospitable place for scientists, but it is thought that the cloud is created by the rising airflow that builds up across the mountain range, and reaches the top of Mount Everest. Moisture rich air from the lower, southern slopes of the mountain condenses as it rises up through the colder air, and combines to form the clouds at the top.

With this phenomenon happening whenever the skies above the mountain are clear, many mountaineers believe that with experience, you can tell the wind direction, wind force, and wind speed at the peak from the cloud formations. For an expedition to reach the summit, this is an invaluable indication of climate conditions at the peak, and a useful tell-tale for when to make that last push to the summit.

April to May and September to November are the best times to visit Everest to see these amazing flags on its peak. The weather during these seasons is milder and much more pleasant for trekking around this high-altitude plateau. Spring and autumn are also the times when there is very little cloud cover over the mountain range, and the best time for the clear skies that make for the perfect conditions to view the flag clouds. Winter is too cold, and more often than not, the roads to the Tibetan Base camp are blocked by snow. 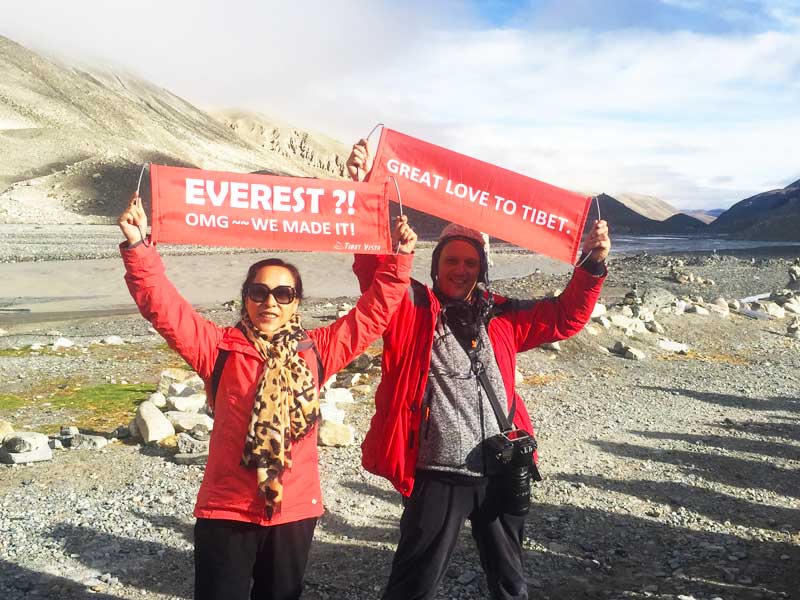 Summer, from June to early August is the monsoon season in Tibet, and although there is not that much rain, the skies get fairly cloudy because of the prevailing, easterly winds and the Inter Tropical Convergence Zone (ITCZ), a belt of low pressure where northern and southern hemisphere winds meet, and which causes thunderstorms in the rainy season.

How to Get to Mount Everest

Getting to the mountain is relatively easy, although there are a lot of official documents and permits that you will need, even before you enter Tibet. Once you have the necessary permits to get into Tibet, you can take Tibet train or fly to Lhasa, the world-famous capital of the region. From there, your guide will be able to drive you across the entire region to Everest Base Camp. The route follows the Sino-Nepal Friendship Highway, which travels through the beautiful cities and towns of Tibet, such as Gyantse, Shigatse, Lhatse, and Tingri, and past the spectacular Rongbuk Monastery, a popular place to stay when visiting Everest.

While you can drive right to the Base Camp site, many people prefer to hike the final four kilometers to the camp, as it is an amazing way to get your first sight of the mountain.

Accommodation near Mount Everest in Tibet

The best accommodation near Mount Everest is the Rongbuk Monastery, which is just a short 4km walk away. The monastery has plenty of rooms for visitors to the mountain, and is a popular stopping point for tourists in the area. If monasteries are not your thing, or you want to stay closer to the mountain, there are several tent hostels at the Base camp, which cater to groups of travelers visiting Mount Everest. You also have the option to camp at the Base Camp, and there is a campsite with water nearby. Touring Mount Everest is everyone’s dream, and with Tibet Vista this dream can easily become a reality. Our favored tour for Everest is an eight-day trip that starts and ends in Lhasa, and visits several places on the route to the world’s tallest mountain.

Day one is your arrival in Lhasa, and you have the remainder of the day to help you acclimatize to the increased altitude.

On day two, you will get to visit the world famous Potala Palace, the former winter home of the Dalai Lama, and one of the oldest monasteries in Tibet. You will also visit the Jokhang Temple, in downtown Lhasa, which contains the famed golden statue of the Sakyamuni Buddha when he was twelve, as well as walking the clockwise kora around Barkhor Street, the famous street of traders in Lhasa, where you can buy almost anything you want.

Day three continues in Lhasa, with trips to Drepung and Sera monasteries. These two beautiful monasteries are part of the Great Three holy monasteries in Tibet, and belong to the Gelug sect of Tibetan Buddhism. Sera is particularly well known for its monastic debates, which you can watch in the afternoons, when the monks spend their time in vocal and expressive debate as part of their training.

On day four you will travel from Lhasa to Shigatse, via Gyantse Town. The route will take you past the beautiful Yamdroktso (Lake Yamdrok), surrounded by snow-covered mountains, and a perfect view of the Holy Mount Nyenchen Khangsar. After passing the pristine white Karola Glacier, and Pelkor Monastery, you will arrive in Shigatse in the late afternoon.

Day five is a trip from Shigatse to the Tashi Lhunpo Monastery, the home of the Panchen Lama, before lunch in the small town of Lhatse. The drive then continues over Tso-la Pass and Gyatso-la Pass, after which you will see the famous mountain in the distance.

The Everest Base Camp is the closest point anyone can get to the mountain, unless they are on an expedition to climb it. However, the mountain is an imposing figure even at this distance, and fills the viewfinder of your camera with its flag-topped majesty. Sunset is one of the best times to photograph the mountain, as the setting sun on its flanks sometimes turns the whole mountain a golden orange color. After visiting the mountain, you will drive back to Shigatse, and on day eight, back to Lhasa to get your flight or train home on the last day of your trip.